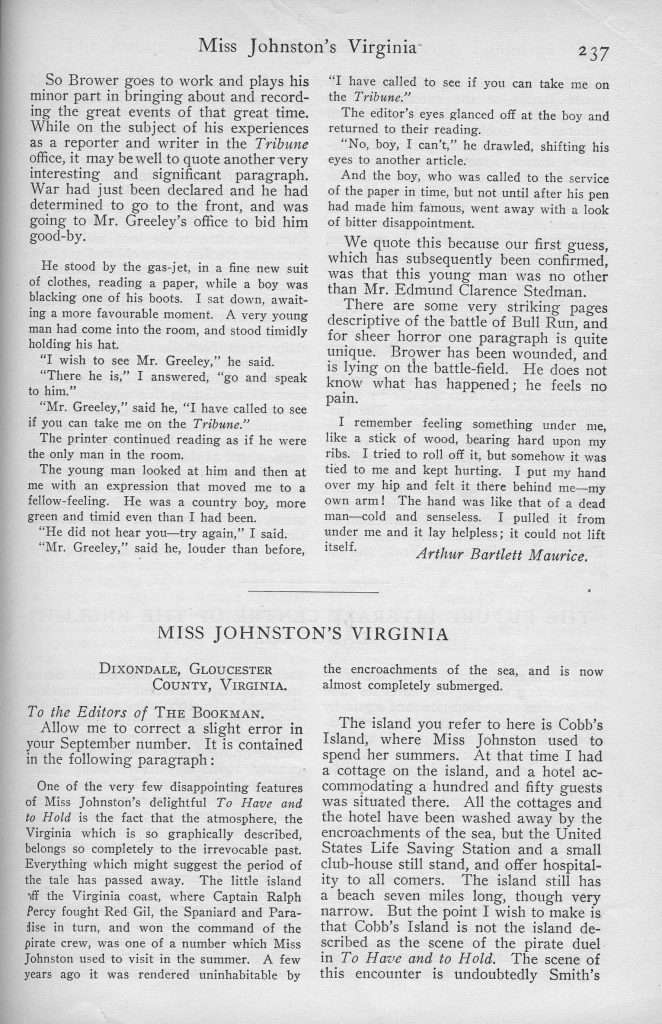 To the Editors of The Bookman.

Allow me to correct a slight error in your September number. It is contained in the following paragraph:

One of the very few disappointing features of Miss Johnston’s delightful To Have and to Hold is the fact that the atmosphere, the Virginia which is so graphically described, belongs so completely to the irrevocable past. Everything which might suggest the period of the tale has passed away. The little island off the Virginia coast, where Captain Ralph Percy fought Red Gil, the Spaniard and Paradise in turn, and won command of the pirate crew, was one of a number which Miss Johnston used to visit in the summer. A few years ago it was rendered uninhabitable by encroachments of the sea, and is now almost completely submerged.

The island you refer to here is Cobb’s Island, where Miss Johnston used to spend her summers. At that time I had a cottage on the island, and a hotel accommodating a hundred and fifty guests was situated there. All the cottages and the hotel have been washed away by the encroachments of the sea, but the United States Life Saving Station and a small club-house still stand, and off hospitality to all comers. The island still has a beach seven miles long, though very narrow. But the point I wish to make is that Cobb’s Island is not the island described as the scene of the pirate duel in To Have and to Hold. The scene of this encounter is undoubtedly Smith’s 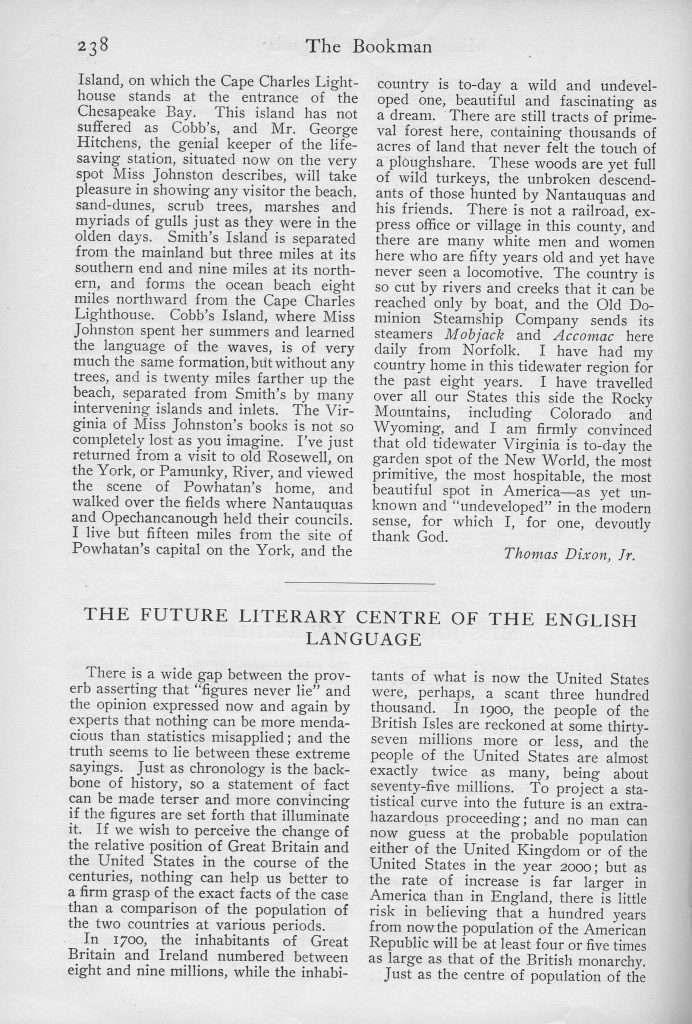 Island, on which the Cape Charles Lighthouse stands at the entrance of the Chesapeake Bay. This island has not suffered as Cobb’s, and Mr. George Hitchens, the genial keeper of the life-saving station, situated now on the very spot Miss Johnston describes, will take pleasure in showing any visitor the beach, sand-dunes, scrub trees, marshes and myriads of gulls just as they were in the olden days. Smith’s Island is separated from the mainland but three miles at its southern end and nine miles at its northern, and forms the ocean beach eight miles northward from the Cape Charles Lighthouse. Cobb’s Island, where Miss Johnston spent her summers and learned the language of the waves, is of very much the same formation, but without any trees, and is twenty miles farther up the beach, separated from Smith’s by many intervening islands and inlets. The Virginia of Miss Johnston’s books is not so completely lost as you might imagine. I’ve just returned from a visit to old Rosewell, on the York, or Pamunky, River, and viewed the scene of Powhatan‘s home, and walked the fields where Nantauquas and Opechancanough held their councils. I live but fifteen miles from the site of Powhatan’s capital on the York, and the country is to-day a wild and undeveloped one, beautiful and fascinating as a dream. There are still tracts of primeval forest here, containing thousands of acres of land that never felt the touch of a ploughshare. These woods are yet full of wild turkeys, the unbroken descendants of those hunted by Nantauquas and his friends. There is not a railroad, express office or village in this county, and there are many white men and women here who are fifty years old and yet have never seen a locomotive. The country is so cut by rivers and creeks that it can be reached only by boat, and the Old Dominion Steamship Company sends it steamers Mobjack and Accomac here daily from Norfolk. I have had my country home in this tidewater region for the past eight years. I have travelled over all our States this side the Rocky Mountains, including Colorado and Wyoming, and I am firmly convinced that old tidewater Virginia is to-day the garden spot of the New World, the most primitive, the most hospitable, the most beautiful spot in America—as yet unknown and “undeveloped” in the modern sense, for which I, for one, devoutly thank God.

RELATED CONTENT
Categories:
Type:
MAP
TIMELINE
November 1900
The Bookman publishes a letter from Thomas Dixon Jr. describing the setting of Mary Johnston's novel To Have and to Hold as it can be explored in modern-day Virginia.
FURTHER READING