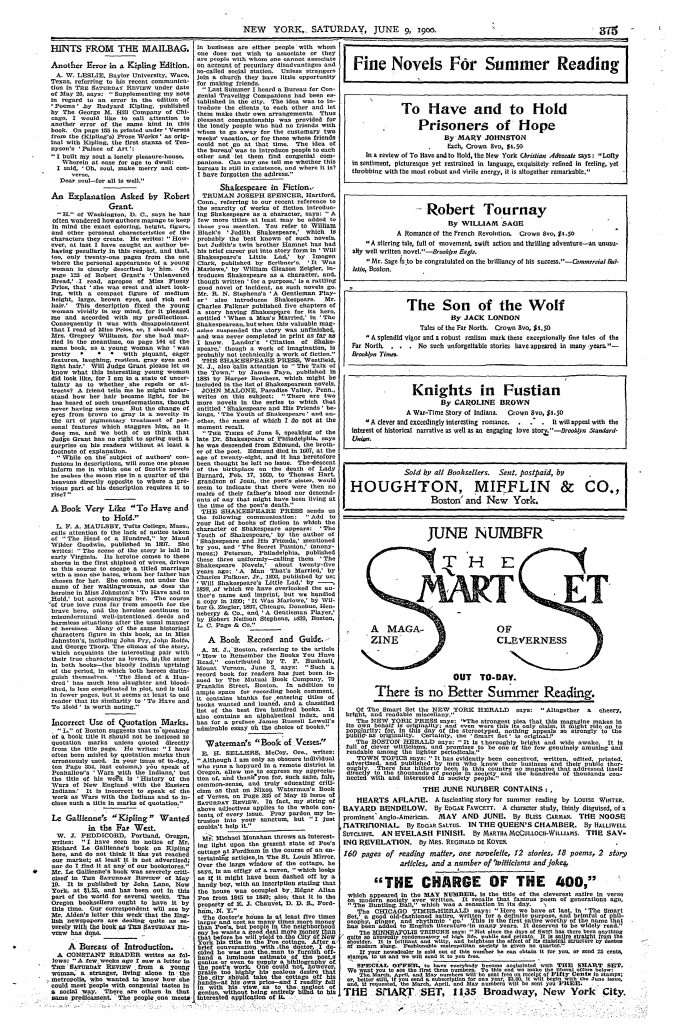 L. F. A. MAULSBY, Tufts College, Mass., calls attention to the lack of notice taken of “The Head of a Hundred,” by Maud Wilder Goodwin, published in 1897. She writes: “The scene of the story is laid in early Virginia. Its heroine comes to these shores in the first shipload of wives, driven to this course to escape a titled marriage with a man she hates, whom her father has chosen for her. She comes, not under the name of her waitingwoman, as does the heroine in Miss Johnston’s ‘To Have and to Hold,’ but accompanying her. The course of true love runs far from smooth for the brave hero, and the heroine continues to misunderstand well-intentioned deeds and harmless situations after the usual manner of heroines. Many of the same historical characters figure in this book, as in Miss Johnston’s, include John P[o]ry, John Rolfe, and George Thorp. The climax of the story, which acquaints the interesting pair with their true character as lovers, is the same in both books—the bloody Indian uprising of the period, in which both heroes distinguish themselves. ‘The Head of a Hundred’ has much less slaughter and bloodshed, is less complicated in plot, and is told in fewer pages, but it seems at least to one reader that its similarity to ‘To Have and To Hold’ is worth noting.”

RELATED CONTENT
Categories:
Type:
MAP
TIMELINE
June 9, 1900
The New York Times publishes a letter suggesting an unseemly similarity between the plots of Mary Johnston's newly published novel To Have and to Hold and The Head of a Hundred (1897) by Maud Wilder Goodwin.
FURTHER READING