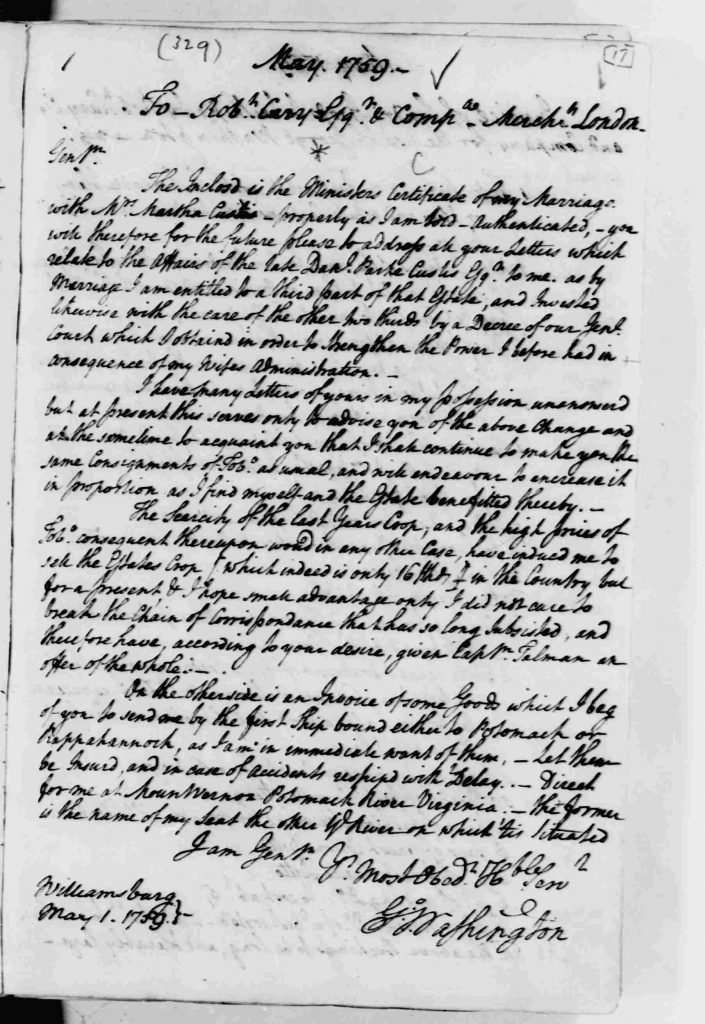 The Inclosd is the Ministers Certificate of my Marriage with Mrs Martha Custis—properly as I am told—Authenticated, you will therefore for the future please to address all your Letters which relate to the Affairs of the late Danl Parke Custis Esqr. to me. as by Marriage I am entitled to a third part of that Estate, and Invested likewise with the care of the other two thirds by a Decree of our Genl Court which I obtaind in order to Strengthen the Power I before had in consequence of my Wifes Administration.

I have many Letters of yours in my possession unanswerd, but at present this serves only to advise you of the above Change and at the sametime to acquaint you that I shall continue to make you the same Consignments of Tobo as usual, and will endeavour to encrease it in proportion as I find myself and the Estate benefitted thereby.

The Scarcity of the last Years Crop; and the high prices of Tobo consequent thereupon woud in any other Case, have inducd me to sell the Estates Crop (which indeed is only 16 Hhds) in the Country but for a present, & I hope small advantage only I did not care to break the Chain of Corrispondance that has so long Subsisted, and therefore have, according to your desire, given Captn [Henry] Talman an offer of the whole.

On the other side is an Invoice of some Goods which I beg of you to send me by the first Ship bound either to Potomack or Rappahannock, as I am in immediate want of them, Let them be Insurd, and in case of accidents reshipd witht Delay. Direct for me at Mount Vernon Potomack River Virginia; the former is the name of my Seat the other the River on which ’tis Situated. I am Gentn Yr Most Obedt Hble Servt