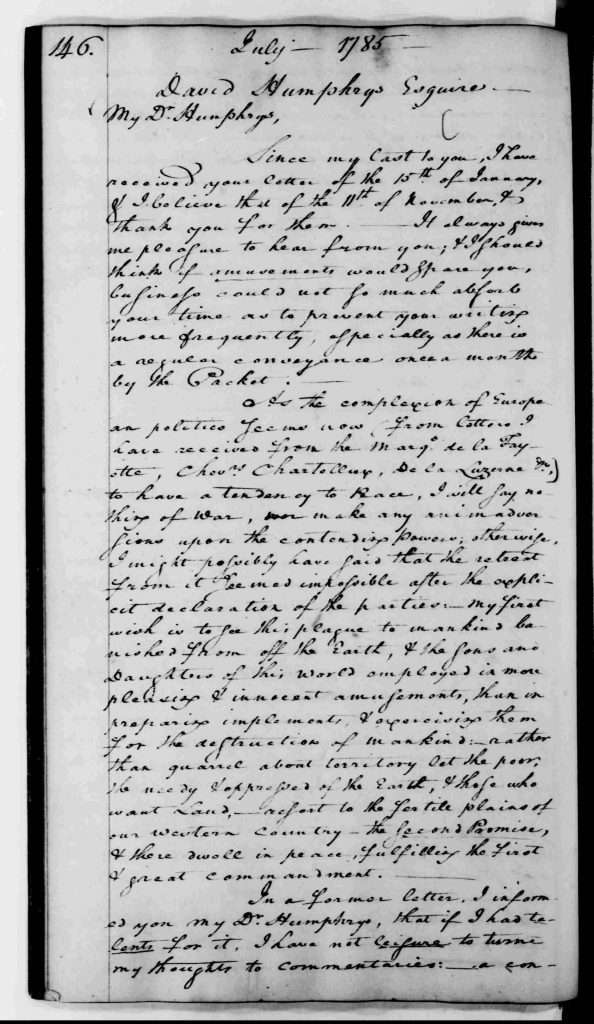 Since my last to you I have received your letters of the 15th of Jany and (I believe) that of the 15th of Novr; & thank you for them both—It always gives me pleasure to hear from you; and I should think, if amusements would spare you, business could not so much absorb your time as to prevent your writing to me more frequently; especially as there is a regular & safe conveyance once a month, by the Packett.

As the complexion of European politics seem now (from the letters I have received from the Marquisses de la Fayette & Chastellux—the Chevr de la Luzerne, &ca) to have a tendency to Peace, I will say nothing of War, nor make any animadversions upon the contending Powers—otherwise I might possibly have added, that the retreat from it seemed impossible, after the explicit declarations of the Parties.

My first wish is, to see this plague to Mankind banished from the Earth; & the Sons & daughters of this World employed in more pleasing & innocent amusements than in preparing implements, & exercising them for the destruction of the human race. Rather than quarrel abt territory, let the poor, the needy, & oppressed of the Earth; and those who want Land, resort to the fertile plains of our Western Country, to the second Land of promise, & there dwell in peace, fulfilling the first & great Commandment.

In a former letter I informed you, My dear Humphreys, that if I had talents for it, I have not leizure to devote my time & thoughts to commentaries. I am 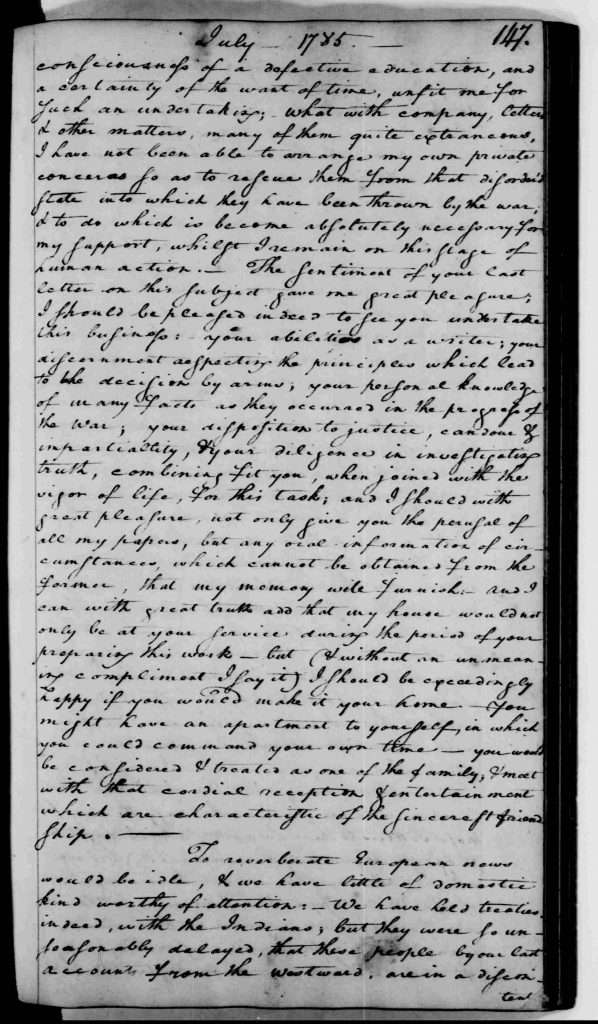 conscious of a defective education, & want of capacity to fit me for such an undertaking. What with Company, letters, & other Matters, many of them extraneous, I have not yet been able to arrange my own private concerns so as to rescue them from that disordered state into which they have been thrown, by the War; and to do which, is become indispensibly necessary for my support, whilst I remain on this stage of human action.

The sentiment of your last letter on this subject gave me great pleasure. I should indeed be pleased to see you undertake this business. Your abilities as a writer—Your discernment respecting the principles which lead to the decision by Arms—Your personal knowledge of many facts as they occurred, in the progress of the War—Your disposition to justice, candour & impartiallity, and your diligence in investigating truth, combining, fits you, in the vigor of life, for this task. and I should with great pleasure not only give you the perusal of all my Papers, but any oral information of circumstances which cannot be obtained from the latter, that my memory will furnish. And I can with great truth add, that my House would not only be at your Service during the period of your preparing this work, but (and without an unmeaning compliment I say it) I shoud be exceedingly happy if you would make it your home. You might have an Apartment to yourself in which you could command your own time. You would be considered, & treated as one of the family. And would meet with that cordial reception & entertainment, which are characteristic of the sincerest friendship.

To reverberate European News would be idle; and we have little of a domestic kind worthy of attention. We have held treaties indeed with the Indians, but they were so unseasonably delayed that these people from our last accts from the Westward are in a discon- 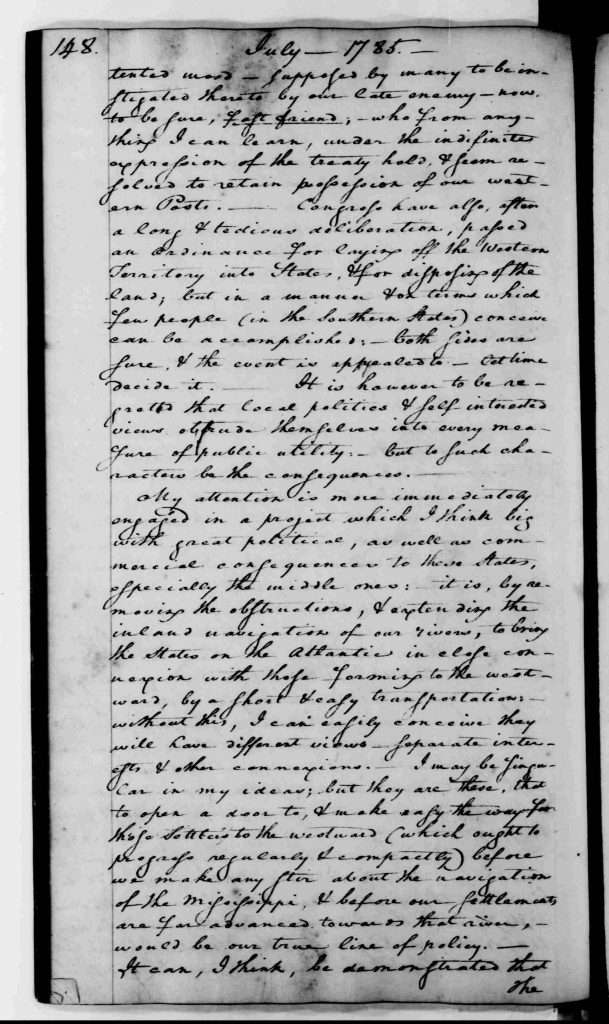 -tented mood—supposed by many to be instigated thereto by our late enemy—now, to be sure, good & fast friends; who, from anything I can learn, under the indefinite expression of the treaty, hold, & seem resolved to retain, possession of our Western Posts. Congress have also—after long & tedeous deliberation—passed an Ordinance for laying of the Western territory into States, & for disposing of the Land; but in a manner, and on terms, which few people (in the Southern States) conceive can be accomplished. Both sides are sure, & the event is appealed to—time must decide. It is to be regretted however, that local politics, & self interested views, obtrude themselves into every measure of public utility. But on such characters, be the obloquy—My attention is more immediately engaged in a project which I think is big with great political, as well as Commercial consequences to these States, especially the middle ones. It is, by removing the obstructions—and extending the inland Navigations of our Rivers, to bring the States on the Atlantic in close connection with those forming to the Westward, by a short & easy Land transportation. Without this is effected, I can readily conceive that the Western Settlers will have different views—seperate interests—and other connections.

I may be singular in my ideas, but they are these, that to open the front door to, & make easy the way for those Settlers to the Westward (which ought to progress regularly & compactly) before we make any stir about the Navigation of the Mississipi, and before our settlements are far advanced towards that River would be our true line of policy. It can I think be demonstrated, that the 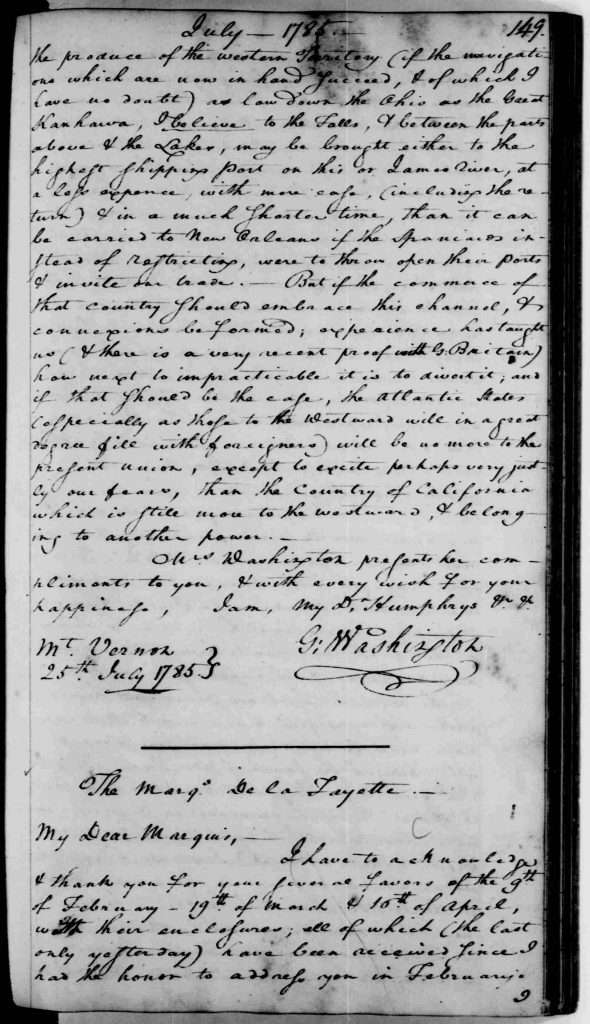 produce of the Western territory (if the Navigations which are now in hand succeed, and of which I have no doubt) as low down the Ohio as the Great Kanhawa (I believe to the Falls) and between the parts above, & the Lakes, may be brought to the highest shipping Port either on this, or James River, at a less expence, with more ease (including the return) and in a much shorter time than it can be carried to New Orleans, if the Spaniards, instead of restrictions were to throw open their ports, & envite our trade—But if the commerce of that Country shd embrace this channel, and connections be formed, experience has taught us (and there is a very recent one in proof, with Great Britain) how next to impracticable it is to divert it—and if that shd be the case, the Atlantic States (especially as those to the Westward will, in a great degree, fill with foreigners) [will be no more to the present union,] except to excite—perhaps with too much cause—our fears that the Country of California, which is still more to the Westward, & belonging to another Power. Mrs Washington presents her compliments to you, and with every wish for your happiness I am—My dear Humphreys Yr sincere friend and Affectionate Hble Servt