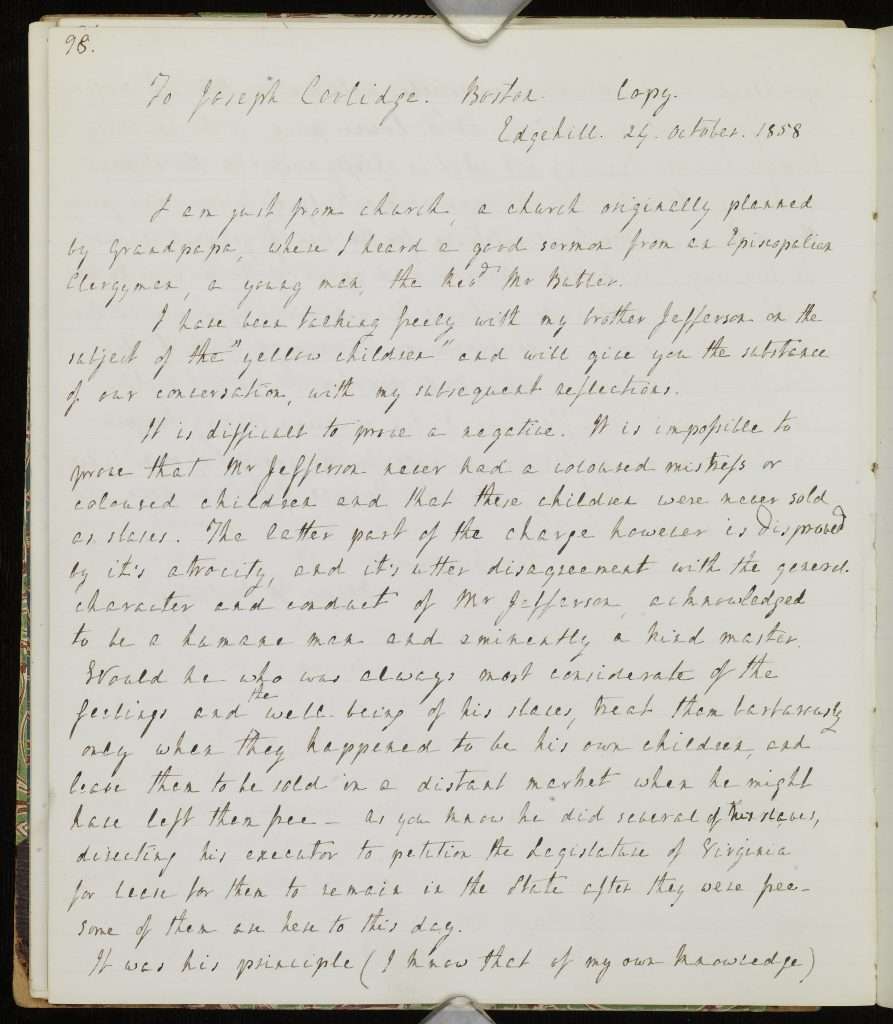 I am just from church, a church originally planned by grandpapa, where I heard a good sermon from an Episcopalian Clergyman, a young man, the Revd. Mr Butler.

I have been talking freely with my brother Jefferson on the subject of the “yellow children” and will give you the substance of our conversation, with my subsequent reflections.

It is difficult to prove a negative. It is impossible to prove that Mr Jefferson never had a coloured mistress or coloured children and that these children were never sold as slaves. The latter part of the charge however is disproved by it’s atrocity, and it’s utter disagreement with the general character and conduct of Mr. Jefferson, acknowledged to be a humane man and eminently a kind master. Would he who was always most considerate of the feelings and the well being of his slaves, treat them barbarously only when they happened to be his own children, and leave them to be sold in a distant market when he might have left them free—as you know he did several of his slaves, directing his executor to petition the Legislature of Virginia for leave for them to remain in the State after they were free—Some of them are here to this day.

It was his principle (I knew that of my own knowledge) 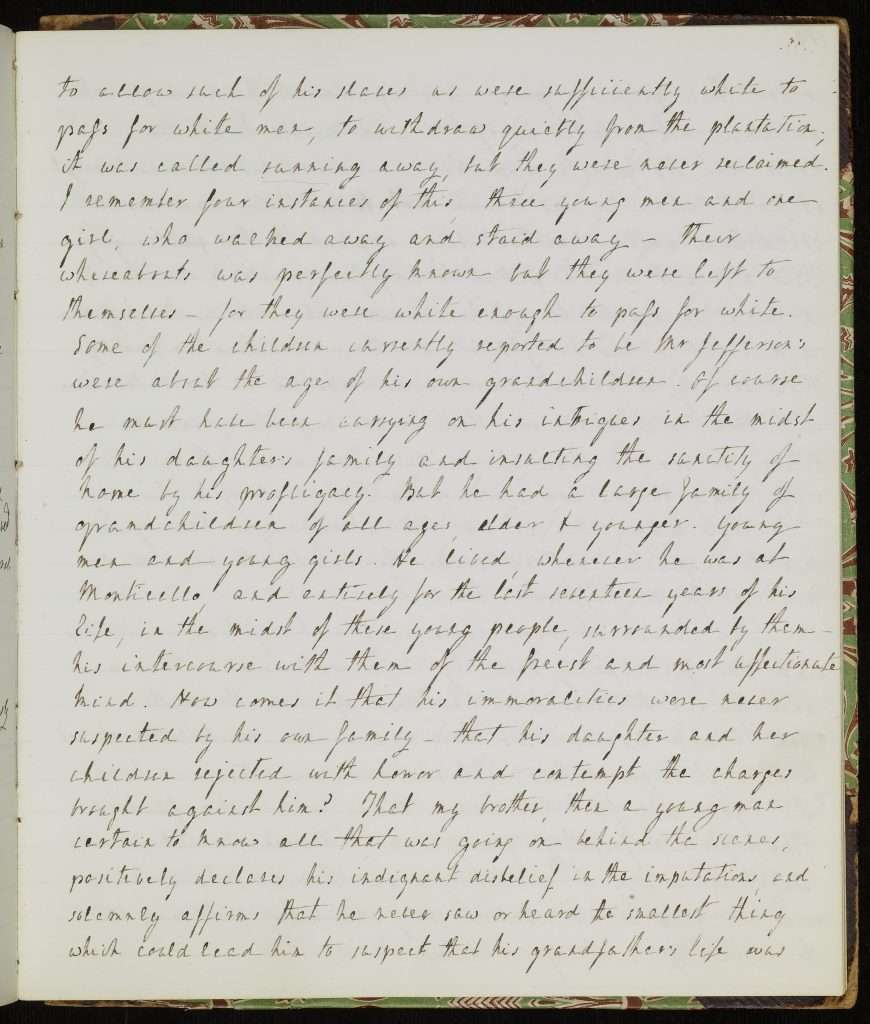 to allow such of his slaves as were sufficiently white to pass for white men, to withdraw quietly from the plantation; it was called running away, but they were never reclaimed. I remember four instances of this, three young men and one girl, who walked away and staid away—Their whereabouts was perfectly known but they were left to themselves—for they were white enough to pass for white. Some of the children currently reported to be Mr Jefferson’s were about the age of his own grandchildren. Of course he must have been carrying on his intrigues in the midst of his daughter’s family and insulting the sanctity of home by his prolifigacy. But he had a large family of grandchildren of all ages, older & younger. Young men and young girls. He lived, whenever he was at Monticello, and entirely for the last seventeen years of his life, in the midst of these young people, surrounded by them—his intercourse with them of the freest and most affectionate kind. How comes it that his immoralities were never suspected by his own family—that his daughter and her children rejected with horror and contempt the charges brought against him? That my brother, then a young man certain to know all that was going on behind the scenes, positively declares his indignant disbelief in the imputations and solemnly affirms that he never saw or heard the smallest thing which could lead him to suspect that his grandfather’s life was 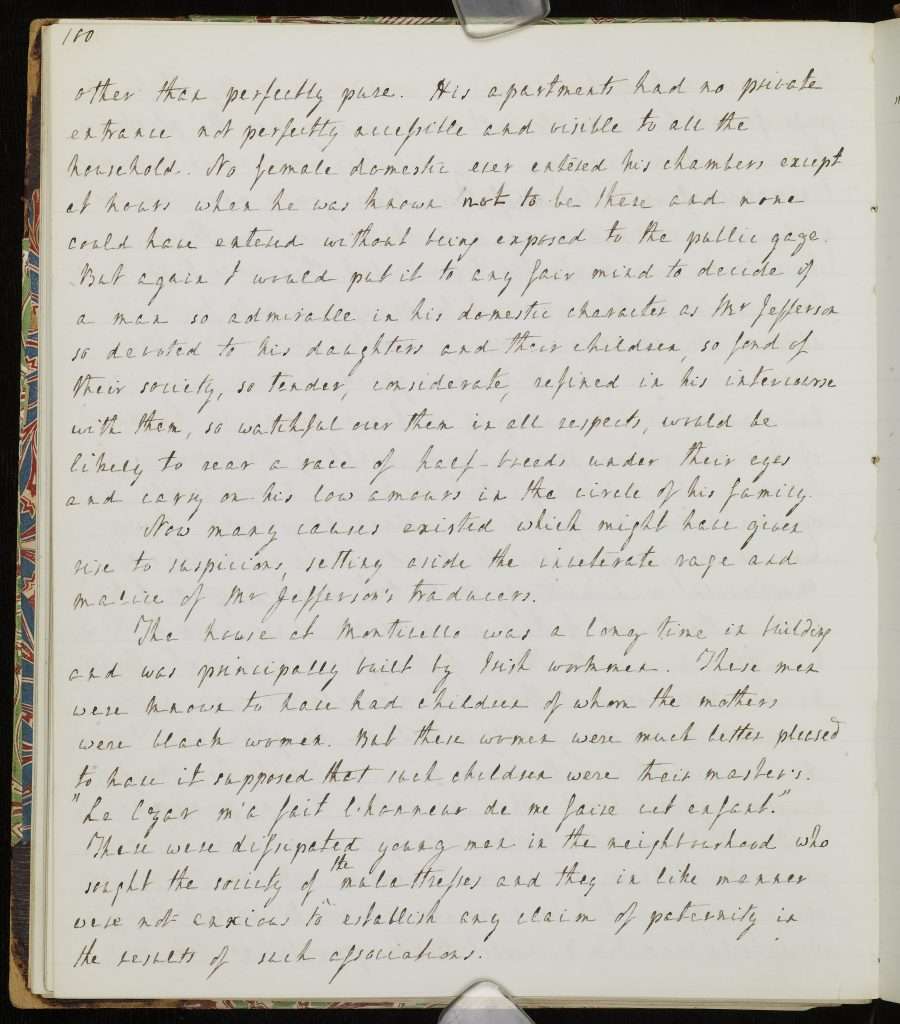 other than perfectly pure. His apartment had no private entrance not perfectly accessible and visible to all the household. No female domestic ever entered his chambers except at hours when he was known not to be there and none could have entered without being exposed to the public gaze. But again I would put it to any fair mind to decide if a man so admirable in his domestic character as Mr Jefferson so devoted to his daughters and their children, so fond of their society, so tender, considerate, refined in his intercourse with them, so watchful over them in all respects, would be likely to rear a race of half-breeds under their eyes and carry on his low amours in the circle of his family.

Now many causes existed which might have given rise to suspicions, setting aside the inveterate rage and malice of Mr Jefferson’s traducers.

The house at Monticello was a long time in building and was principally built by Irish workmen. These men were known to have had children of whom the mothers were black women. But these women were much better pleased to have it supposed that such children were their master’s. “Le Czar m’a fait l’honneur de me faire cet enfant.” There were dissipated young men in the neighborhood who sought the society of the mulatresses and they in like manner were not anxious to establish any claim of paternity in the results of such associations. 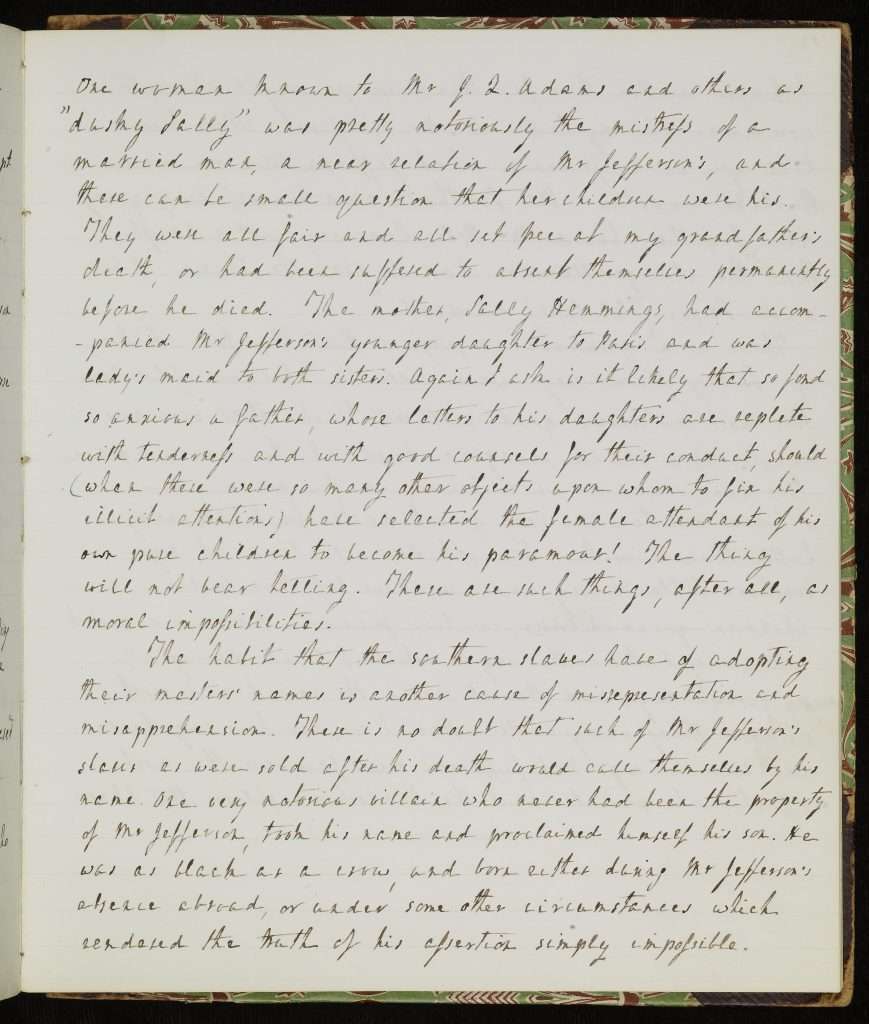 One woman known to Mr J. Q. Adams and others as “dusky Sally” was pretty notoriously the mistress of a married man, a near relation of Mr Jefferson’s, and there can be small question that her children were his. They were all fair and all set free at my grandfather’s death, or had been suffered to absent themselves permanently before he died. The mother, Sally Hemings, had accompanied Mr Jefferson’s younger daughter to Paris and was lady’s maid to both sisters. Again I ask is it likely that so fond so anxious a father, whose letters to his daughters are replete with tenderness and with good counsels for their conduct, should (when there were so many other objects upon whom to fix his illicit attentions) have selected the female attendant of his own pure children to become his paramour! The thing will not bear telling. There are such things, after all, as moral impossibilities.

The habit that the southern slaves have of adopting their masters’ names is another cause of misrepresentation and misapprehension. There is no doubt that such of Mr Jefferson’s slaves as were sold after his death would call themselves by his name. One very notorious villain who never had been the property of Mr Jefferson, took his name and proclaimed himself his son. He was as black as a crow, and born during Mr Jefferson’s absence abroad, or under some other circumstances which rendered the truth of his assertion simply impossible. 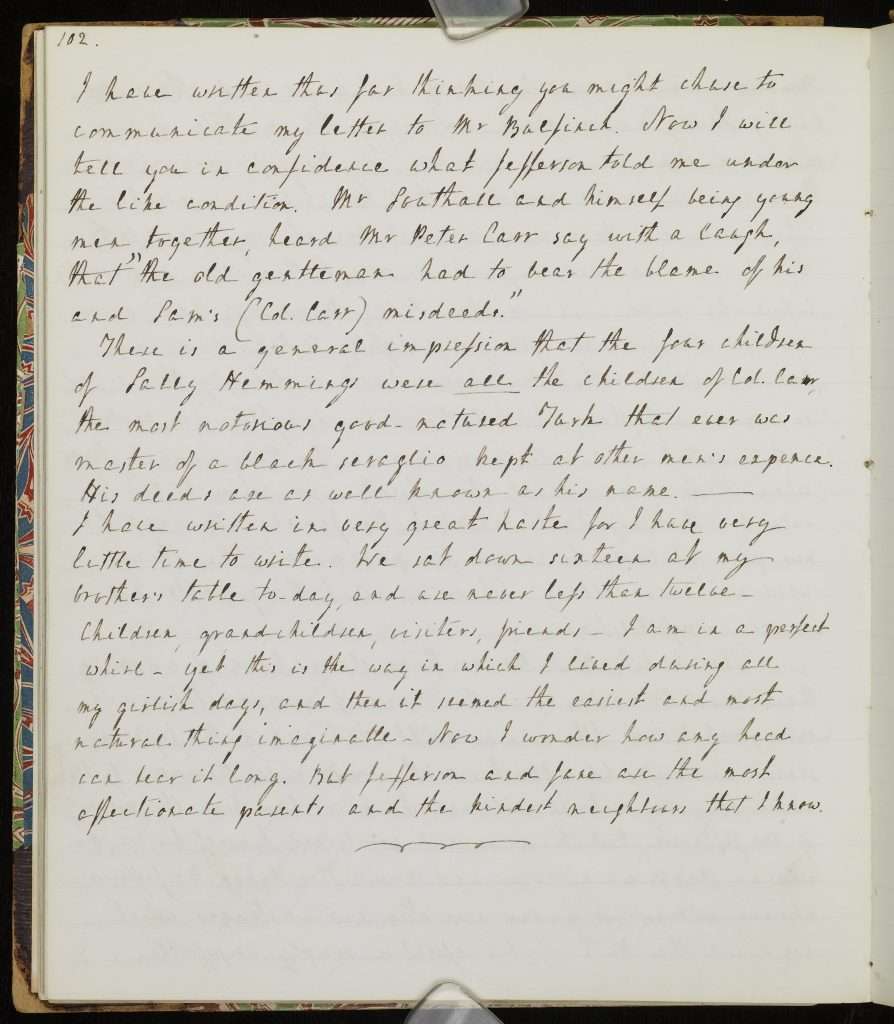 I have written thus far thinking you might chuse to communicate my letter to Mr Bulfinch. Now I will tell you in confidence what Jefferson told me under the like condition. Mr Southall and himself being young men together, heard Mr Peter Carr say with a laugh, that “the old gentleman had to bear the blame of his and Sam’s (Col. Carr) misdeeds.”

There is a general impression that the four children of Sally Hemmings were all the children of Col. Carr, the most notorious good-natured Turk that ever was master of a black seraglio kept at other men’s expence. His deeds are as well known as his name.—I have written in very great haste for I have very little time to write. We sat down sixteen at my brother’s table to-day, and are never less than twelve—Children, grandchildren, visitors, friends—I am in a perfect whirl—yet this is the way in which I lived during all my girlish days, and then it seemed the easiest and most natural thing imaginable—Now I wonder how my head can bear it long. But Jefferson and Jane are the most affectionate parents and the kindest neighbors that I know.

RELATED CONTENT
Categories:
Type:
MAP
TIMELINE
October 24, 1858
In a letter to her husband, Joseph Coolidge, Ellen Wayles Randolph Coolidge denies the possibility that her grandfather, Thomas Jefferson, could have fathered children by the slave Sally Hemings. She also reports on speculation that Jefferson's nephews, Peter and Samuel Carr, may have been responsible.
FURTHER READING