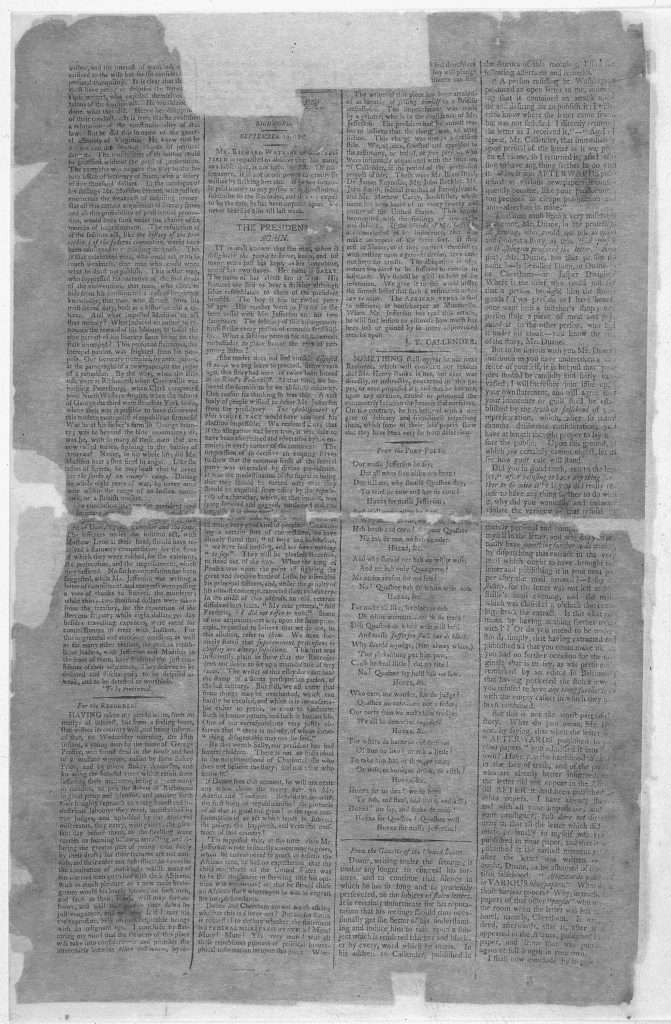 IT is well known that the man, whom it delighteth the people to honor, keeps, and for many years past has kept, as his concubine, one of his own slaves. Her name is Sally. The name of her eldest son is Tom. His features are said to bear a striking although sable resemblance to those of the president himself. The boy is ten or twelve years of age. His mother went to France in the same vessel with Mr. Jefferson and his two daughters. The delicacy of this arrangement must strike every person of common sensibility. What a sublime pattern for an American ambassador to place before the eyes of two young ladies!

If the reader does not feel himself disposed to pause we beg leave to proceed. Some years ago, this story had once or twice been hinted at in Rind’s Federalist. At that time, we believed the surmise to be an absolute calumny. One reason for thinking so was this. A vast body of people wished to debar Mr. Jefferson from the presidency. The establishment of this single fact would have rendered his election impossible. We reasoned thus; that if the allegation had been true, it was sure to have been ascertained and advertised by his enemies, in every corner of the continent. The suppression of so decisive an enquiry serves to shew that the common sense of the federal party was overruled by divine providence. It was the predestination of the supreme being that they should be turned out; that they should be expelled from office the popularity of a character, which, at that instant, was lying fettered and gagged, consumed and extinguished at their feet!

We do not wish to give wanton offence to many very good kind of people. Concerning a certain sort of connections, we have already stated that “of boys and batchelors, we have said nothing, and we have nothing to say.” They will be pleased, therefore, to stand out of the way. When the king of Prussia was upon the point of fighting the great and decisive battle of Lissa, he assembled his principal officers, and, under the penalty of his utmost contempt, exhorted them to bravery. In the midst of this address, an old veteran dissolved into tears. “My dear general,” said Frederic, “I did not refer to you.” Some of our acquaintances are, upon the same principle, requested to believe that we do not, in this allusion, refer to them. We have formerly stated that supereminent pretensions to chastity are always suspicious. This hint was sufficiently plain to shew that the Recorder does not desire to set up a manufacture of wry faces. The writer of this essay does not bear the stamp of a Scots presbyterian parson of the last century. But still, we all know that some things may be overlooked, which can hardly be excused, and which it is impracticable either to praise, or even to vindicate. Such is human nature, and such is human life. One of our correspondents very justly observes that “there is nobody, of whom something disagreeable may not be said.”

By this wench Sally, our president has had several children. There is not an individual in the neighbourhood of Charlottesville who does not believe the story; and not a few who know it.

If Duane sees this account, he will not prate any more about the treaty between Mr. Adams and Toussaint. Behold the favorite, the first born of republicanism! the pinnacle of all that is good and great! in the open consummation of an act which tends to subvert the policy, the happiness, and even the existence of this country!

‘Tis supposed that, at the time when Mr. Jefferson wrote so smartly concerning negroes, when he endeavoured so much to belittle the African race, he had no expectation that the chief magistrate of the United States was to be the ringleader in shewing that his opinion was erroneous; or, that he should chuse an African stock whereupon he was to engraft his own descendants.

Duane and Cheetham are not worth asking whether this is a lie or not? But censor Smith is requested to declare whether the statement is a federal misrepresentation? Mute! Mute! Mute! Yes very mute! Will all those republican printers of political biographical information be upon this point. Whether they stir, or not, they must feel themselves like a horse in a quick-sand. They will plunge deeper and deeper, until no assistance can save them.

The writer of this piece has been arraigned as capable of selling himself to a British ambassador. The impeachment was made by a printer, who is in the confidence of Mr. Jefferson. The president had the utmost reason to believe that the charge was an utter fiction. This charge was met in a decisive stile. We, at once, selected and appealed to the testimony, or belief, of five persons, who were intimately acquainted with the situation of Callender, at the period of the pretended project of sale. These were Mr. Israel Israel, Dr. James Reynolds, Mr. John Beckley, Mr. John Smith, federal marshal of Pennsylvania, and Mr. Mathew Carey, bookseller, whose name has been heard of in every county and corner of the United States. This appeal harmonised with the feelings of innocence and defiance. If the friends of Mr. Jefferson are convinced of his innocence, they will make an appeal of the same sort. If they rest in silence, or if they content themselves with resting upon a general denial, they can not hope for credit. The allegation is of a nature too black to be suffered to remain in suspence. We should be glad to hear of its refutation. We give it to the world under the firmest belief that such a refutation never can be made. The African venus is said to officiate, as housekeeper at Monticello. When Mr. Jefferson has read this article, he will find leisure to estimate how much has been lost or gained by so many unprovoked attacks upon