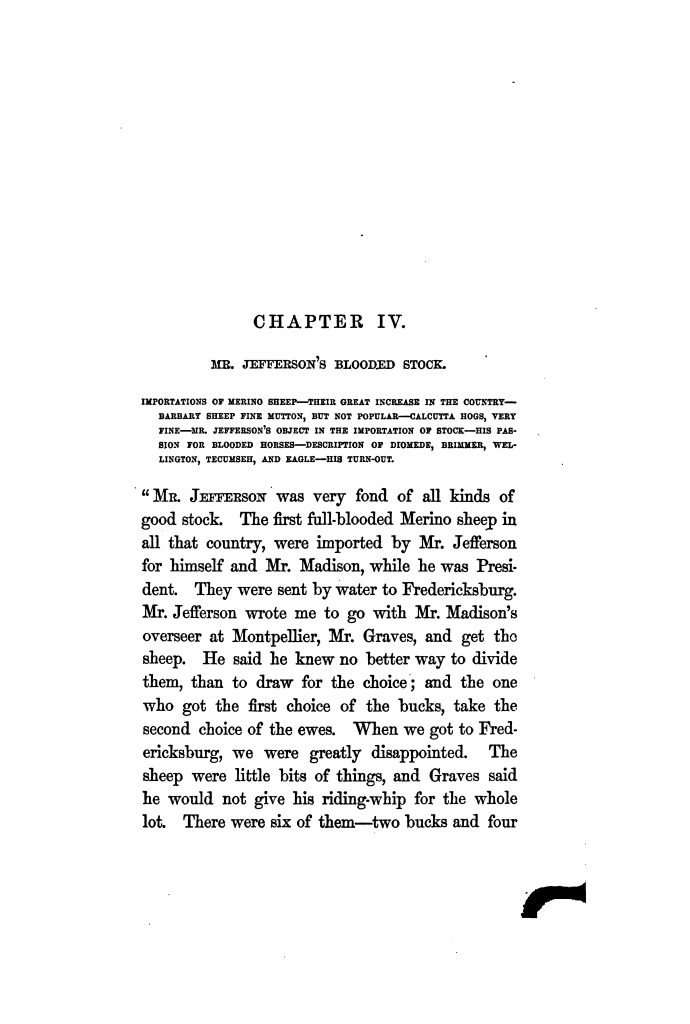 “Mr. Jefferson was very fond of all kinds of good stock. The first full-blooded Merino sheep in all that country, were imported by Mr. Jefferson for himself and Mr. Madison, while he was President. They were sent by water to Fredericksburg. Mr. Jefferson wrote me to go with Mr. Madison’s overseer at Montpellier, Mr. Graves, and get the sheep. He said he knew no better way to divide them, than to draw for the choice; and the one who got the first choice of the bucks, take the second choice of the ewes. When we got to Fredericksburg, we were greatly disappointed. The sheep were little bits of things, and Graves said he would not give his riding-whip for the whole lot. There were six of them—two bucks and four 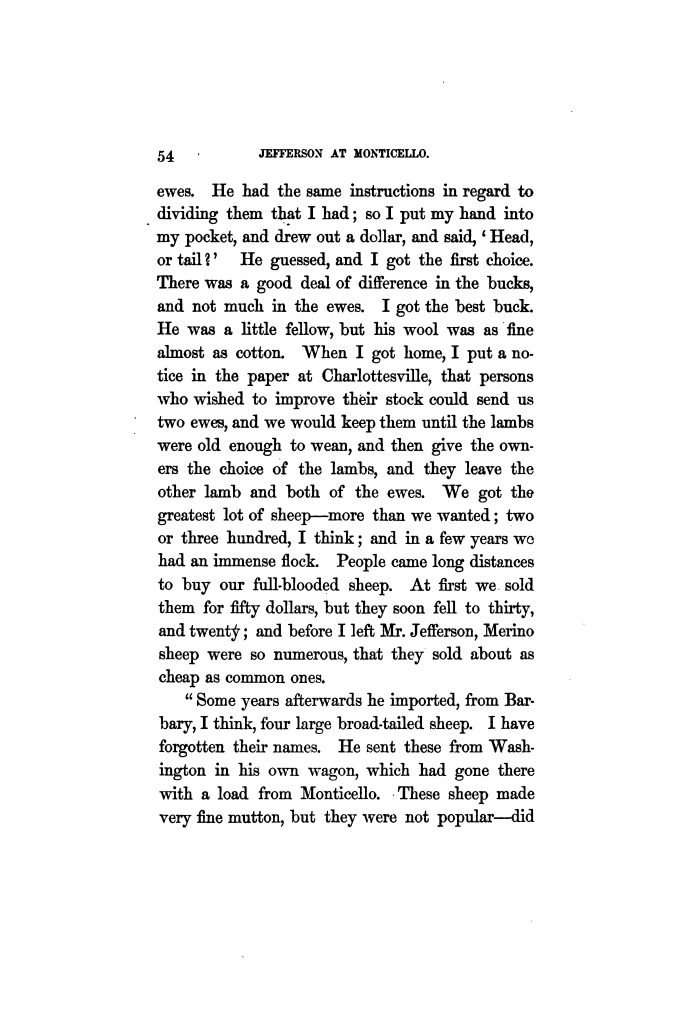 ewes. He had the same instructions in regard to dividing them that I had; so I put my hand into my pocket, and drew out a dollar, and said, ‘Head, or tail?’ He guessed, and I got the first choice. There was a good deal of difference in the bucks, and not much in the ewes. I got the best buck. He was a little fellow, but his wool was as fine almost as cotton. When I got home, I put a notice in the paper at Charlottesville, that persons who wished to improve their stock could send us two ewes, and we would keep them until the lambs were old enough to wean, and then give the owners the choice of the lambs, and they leave the other lamb and both of the ewes. We got the greatest lot of sheep—more than we wanted; two or three hundred, I think; and in a few years we had an immense flock. People came long distances to buy our full-blooded sheep. At first we sold them for fifty dollars, but they soon fell to thirty, and twenty; and before I left Mr. Jefferson, Merino sheep were so numerous, that they sold about as cheap as common ones.

“Some years afterwards he imported, from Barbary, I think, four large broad-tailed sheep. I have forgotten their names. He sent these from Washington in his own wagon, which had gone there with a load from Monticello. These sheep made very fine mutton, but they were not popular—did 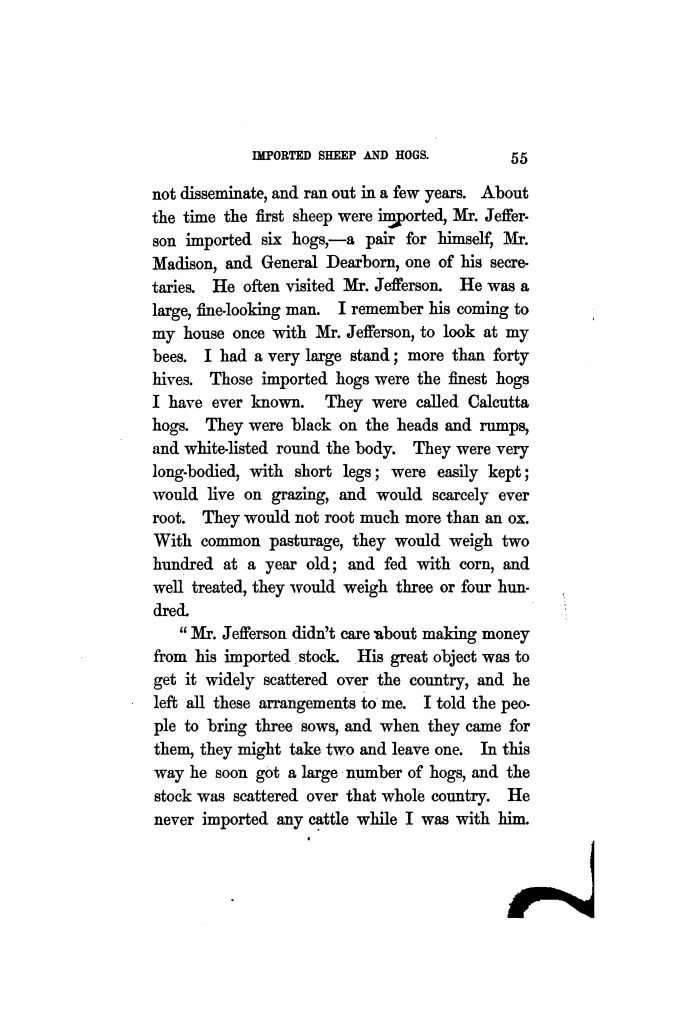 not disseminate, and ran out in a few years. About the time the first sheep were imported, Mr. Jefferson imported six hogs,—a pair for himself, Mr. Madison, and General Dearborn, one of his secretaries. He often visited Mr. Jefferson. He was a large, fine-looking man. I remember his coming to my house once with Mr. Jefferson, to look at my bees. I had a very large stand; more than forty hives. Those imported hogs were the finest hogs I have ever known. They were called Calcutta hogs. They were black on the heads and rumps, and white-listed round the body. They were very long-bodied, with short legs; were easily kept; would live on grazing, and would scarcely ever root. They would not root much more than an ox. With common pasturage, they would weigh two hundred at a year old; and fed with corn, and well treated, they would weigh three or four hundred.

“Mr. Jefferson didn’t care about making money from his imported stock. His great object was to get it widely scattered over the country, and he left all these arrangements to me. I told the people to bring three sows, and when they came for them, they might take two and leave one. In this way he soon got a large number of hogs, and the stock was scattered over that whole country. He never imported any cattle while I was with him. 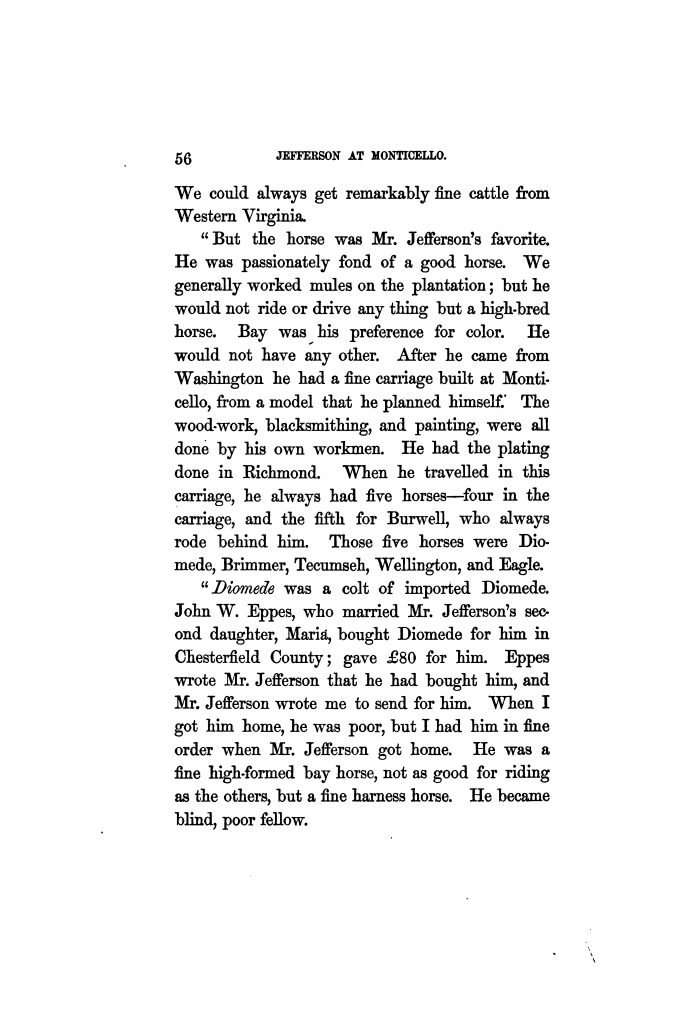 We could always get remarkably fine cattle from Western Virginia.

“But the horse was Mr. Jefferson’s favorite. He was passionately fond of a good horse. We generally worked mules on the plantation; but he would not ride or drive any thing but a high-bred horse. Bay was his preference for color. He would not have any other. After he came from Washington he had a fine carriage built at Monticello, from a model that he planned himself.’ The wood-work, blacksmithing, and painting, were all done by his own workmen. He had the plating done in Richmond. When he travelled in this carriage, he always had five horses—four in the carriage, and the fifth for Burwell, who always rode behind him. Those five horses were Diomede, Brimmer, Tecumseh, Wellington, and Eagle.

“Diomede  was a colt of imported Diomede. John W. Eppes, who married Mr. Jefferson’s second daughter, Maria, bought Diomede for him in Chesterfield County; gave £80 for him. Eppes wrote Mr. Jefferson that he had bought him, and Mr. Jefferson wrote me to send for him. When I got him home, he was poor, but I had him in fine order when Mr. Jefferson got home. He was a fine high-formed bay horse, not as good for riding as the others, but a fine harness horse. He became blind, poor fellow. 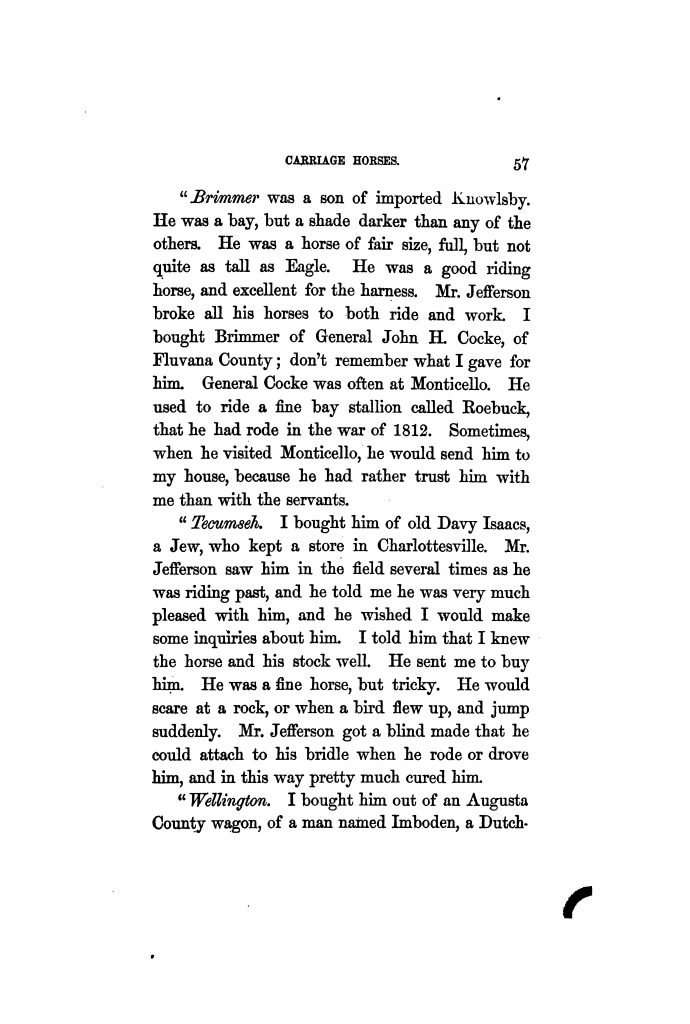 “Brimmer was a son of imported Knowlsby. He was a bay, but a shade darker than any of the others. He was a horse of fair size, full, but not quite as tall as Eagle. He was a good riding horse, and excellent for the harness. Mr. Jefferson broke all his horses to both ride and work. I bought Brimmer of General John H. Cocke, of Fluvana County; don’t remember what I gave for him. General Cocke was often at Monticello. He used to ride a fine bay stallion called Roebuck, that he had rode in the war of 1812. Sometimes, when he visited Monticello, he would send him to my house, because he had rather trust him with me than with the servants.

“Tecumseh. I bought him of old Davy Isaacs, a Jew, who kept a store in Charlottesville. Mr. Jefferson saw him in the field several times as he was riding past, and he told me he was very much pleased with him, and he wished I would make some inquiries about him. I told him that I knew the horse and his stock well. He sent me to buy him. He was a fine horse, but tricky. He would scare at a rock, or when a bird flew up, and jump suddenly. Mr. Jefferson got a blind made that he could attach to his bridle when he rode or drove him, and in this way pretty much cured him.

“Wellington. I bought him out of an Augusta County wagon, of a man named Imboden, a Dutch- 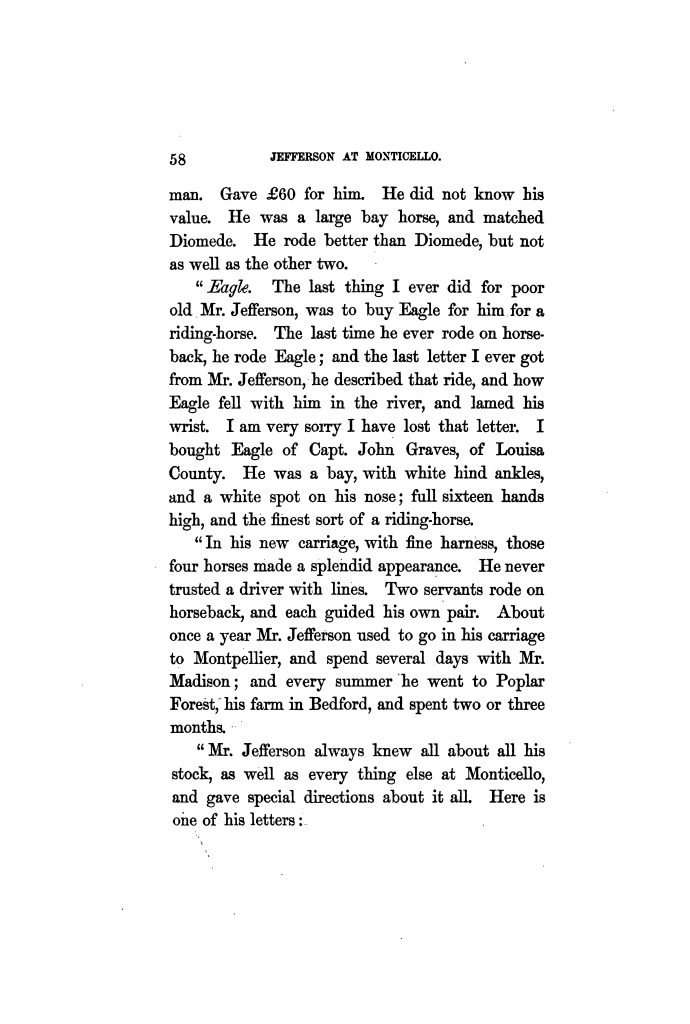 man. Gave £60 for him. He did not know his value. He was a large bay horse, and matched Diomede. He rode “better than Diomede, but not as well as the other two.

“Eagle. The last thing I ever did for poor old Mr. Jefferson, was to buy Eagle for him for a riding-horse. The last time he ever rode on horseback, he rode Eagle; and the last letter I ever got from Mr. Jefferson, he described that ride, and how Eagle fell with him in the river, and lamed his wrist. I am very sorry I have lost that letter. I bought Eagle of Capt. John Graves, of Louisa County. He was a bay, with white hind ankles, and a white spot on his nose; full sixteen hands high, and the finest sort of a riding-horse.

“In his new carriage, with fine harness, those four horses made a splendid appearance. He never trusted a driver with lines. Two servants rode on horseback, and each guided his own pair. About once a year Mr. Jefferson used to go in his carriage to Montpellier, and spend several days with Mr. Madison; and every summer he went to Poplar Forest, his farm in Bedford, and spent two or three months.

“Mr. Jefferson always knew all about all his stock, as well as every thing else at Monticello, and gave special directions about it all. Here is one of his letters: 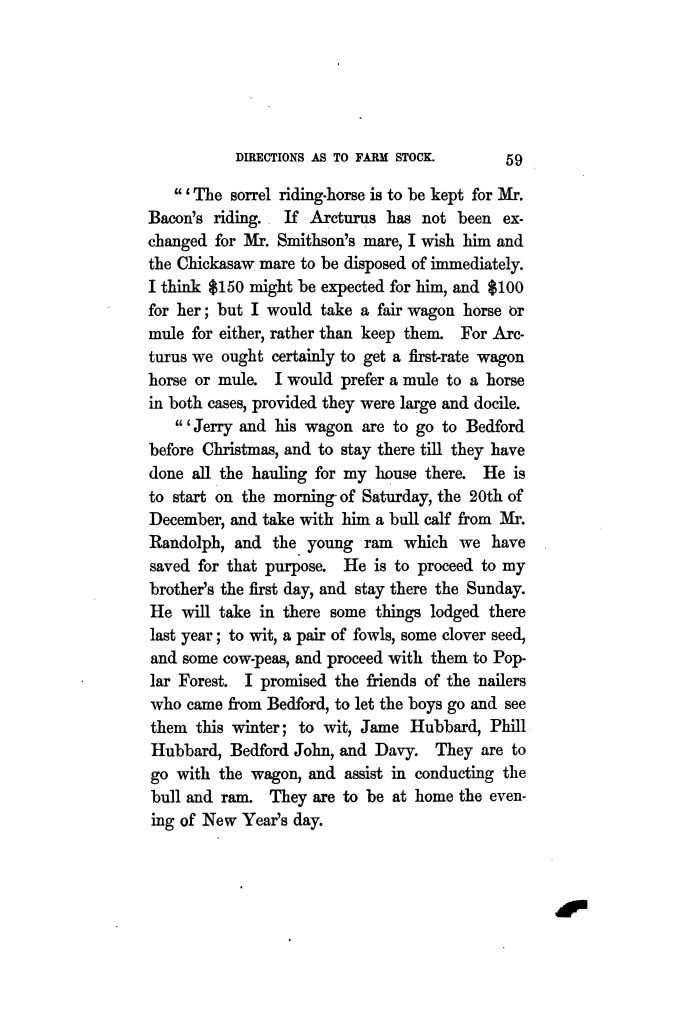 directions as to farm stock

“‘The sorrel riding-horse is to be kept for Mr. Bacon’s riding. If Arcturus has not been exchanged for Mr. Smithson’s mare, I wish him and the Chickasaw mare to be disposed of immediately. I think $150 might be expected for him, and $100 for her; but I would take a fair wagon horse or mule for either, rather than keep them. For Arcturus we ought certainly to get a first-rate wagon horse or mule. I would prefer a mule to a horse in both cases, provided they were large and docile.

“‘Jerry and his wagon are to go to Bedford before Christmas, and to stay there till they have done all the hauling for my house there. He is to start on the morning of Saturday, the 20th of December, and take with him a bull calf from Mr. Randolph, and the young ram which we have saved for that purpose. He is to proceed to my brother’s the first day, and stay there the Sunday. He will take in there some things lodged there last year; to wit, a pair of fowls, some clover seed, and some cow-peas, and proceed with them to Poplar Forest. I promised the friends of the nailers who came from Bedford, to let the boys go and see them this winter; to wit, Jame Hubbard, Phill Hubbard, Bedford John, and Davy. They are to go with the wagon, and assist in conducting the bull and ram. They are to be at home the evening of New Year’s day. 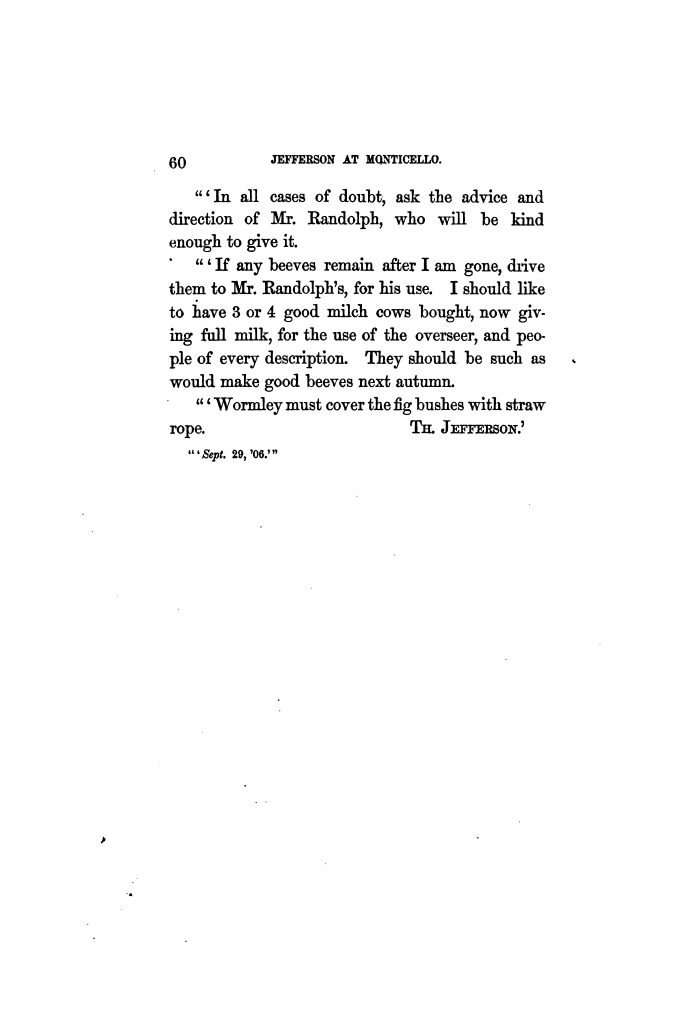 “‘In all cases of doubt, ask the advice and direction of Mr. Randolph, who will be kind enough to give it.

“‘If any beeves remain after I am gone, drive them to Mr. Randolph’s, for his use. I should like to have 3 or 4 good milch cows bought, now giving full milk, for the use of the overseer, and people of every description. They should be such as would make good beeves next autumn.

“‘Wormley must cover the fig bushes with straw rope.’