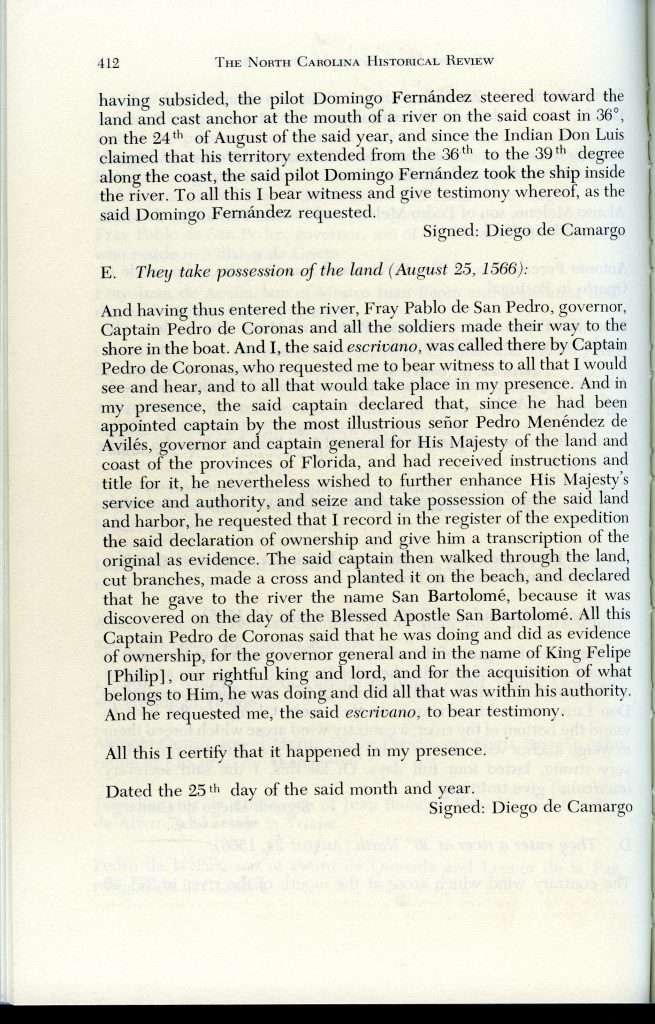 And having thus entered the river, Fray Pablo de San Pedro, governor, Captain Pedro de Coronas and all the soldiers made their way to the shore in the boat. And I, the said escrivano, was called there by Captain Pedro de Coronas, who requested me to bear witness to all that I would see and hear, and to all that would take place in my presence. And in my presence, the said captain declared that, since he had been appointed captain by the most illustrious señor Pedro Menéndez de Avilés, governor and captain general for His Majesty of the land and coast of the provinces of Florida, and had received instructions and title for it, he nevertheless wished to further enhance His Majesty’s service and authority, and seize and take possession of the said land and harbor, he requested that I record in the register of the expedition the said declaration of ownership and give him a transcription of the original as evidence. The said captain then walked through the land, cut branches, made a cross and planted it on the beach, and declared that he gave to the river the name San Bartolomé, because it was discovered on the day of the Blessed Apostle San Bartolomé. All this Captain Pedro de Coronas said that he was doing and did as evidence of ownership, for the governor general and in the name of King Felipe [Philip], our rightful king and lord, and for the acquisition of what belongs to Him, he was doing and did all that was within his authority. And he requested me, the said escrivano, to bear testimony.

All this I certify that happened in my presence.

Dated the 25th day of the said month and year.