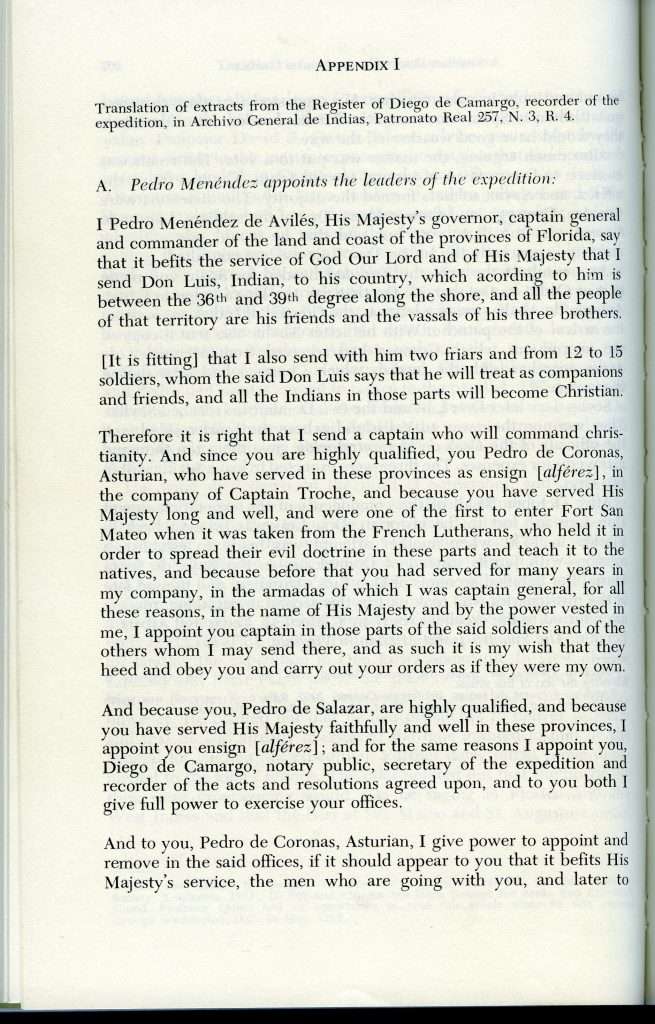 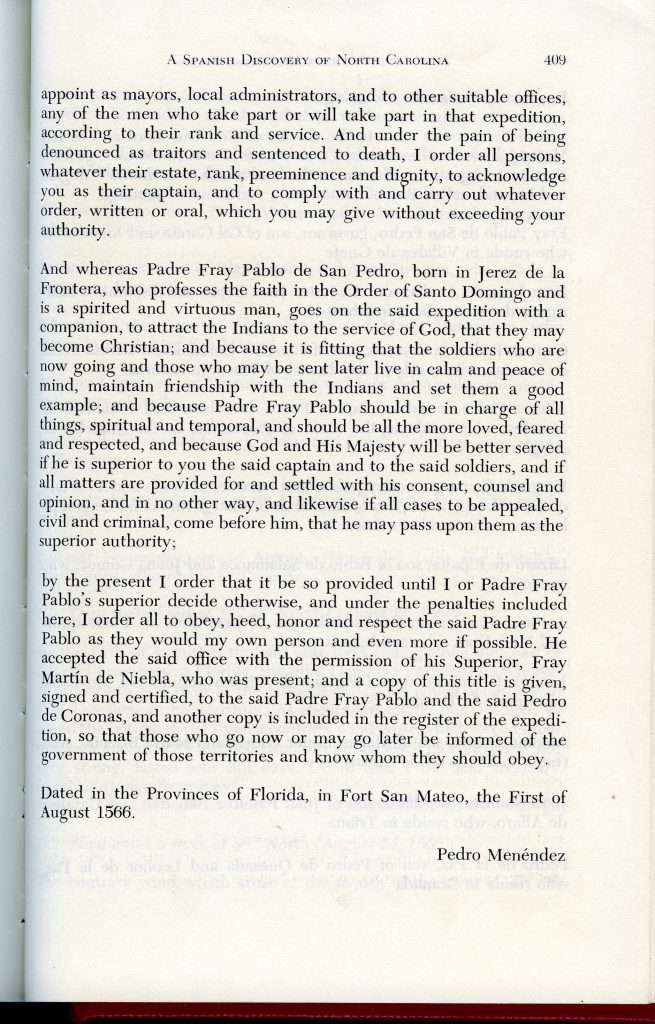 I Pedro Menéndez de Avilés, His Majesty’s governor, captain general and commander of the land and coast of the provinces of Florida, say that it befits the service of God Our Lord and of His Majesty that I send Don Luis, Indian, to his country, which according to him is between the 36th and 39th degree along the shore, and all the people of that territory are his friends and the vassals of his three brothers.

[It is fitting] that I also send with him two friars and from 12 to 15 soldiers, whom the said Don Luis says that he will treat as companions and friends, and all the Indians in those parts will become Christians.

Therefore it is right that I send a captain who will command Christianity. And since you are highly qualified, you Pedro de Coronas, Asturian, who have served in these provinces as ensign [alférez], in the company of Captain Troche, and because you have served His Majesty long and well, and were one of the first to enter Fort San Mateo when it was taken from the French Lutherans, who held it in order to spread their evil doctrine in these parts and teach it to the natives, and because before that you had served for many years in my company, in the armadas of which I was captain general, for all these reasons, in the name of His Majesty and by the power vested in me, I appoint you captain in those parts of the said soldiers and of the others whom I may send there, and as such it is my wish that they heed and obey you and carry out your orders as if they were my own.

And because you, Pedro de Salazar, are highly qualified, and because you have served His Majesty faithfully and well in these provinces, I appoint you ensign [alférez]; and for the same reasons I appoint you, Diego de Camargo, notary public, secretary of the expedition and recorder of the acts and resolutions agreed upon, and to you both I give full power to exercise your offices.

And to you, Pedro de Coronas, Asturian, I give power to appoint and remove in the said offices, if it should appear to you that it befits His Majesty’s service, the men who are going with you, and later to appoint as mayors, local administrators, and to other suitable offices, any of the men who take part or will take part in that expedition, according to their rank and service. And under the pain of being denounced as traitors and sentenced to death, I order all persons, whatever their estate, rank, preeminence and dignity, to acknowledge you as their captain, and to comply with and carry out whatever order, written or oral, which you may give without exceeding your authority.

And whereas Padre Fray Pablo de San Pedro, born in Jerez de la Frontera, who professes the faith in the Order of Santo Domingo and is a spirited and virtuous man, goes on the said expedition with a companion, to attract the Indians to the service of God, that they may become Christian; and because it is fitting that the soldiers who are now going and those who may be sent later live in calm and peace of mind, maintain friendship with the Indians and set them a good example; and because Padre Fray Pablo should be in charge of all things, spiritual and temporal, and should be all the more loved, feared and respected, and because God and His Majesty will be better served if he is superior to you the said captain and to the said soldiers, and if all matters are provided for and settled with his consent, counsel and opinion, and in no other way, and likewise if all cases to be appealed, civil and criminal, come before him, that he may pass upon them as the superior authority;

by the present I order that it be so provided until I or Padre Fray Pablo’s superior decide otherwise, and under the penalties included here, I order all to obey, heed, honor and respect the said Padre Fray Pablo as they would my own person and even more if possible. He accepted the said office with the permission of his Superior, Fray Martín de Niebla, who was present; and a copy of this title is given, signed and certified, to the said Padre Fray Pablo and the said Pedro de Coronas, and another copy is included in the register of the expedition, so that those who go now or may go later be informed of the government of those territories and know whom they should obey.

Dated in the Provinces of Florida, in Fort San Mateo, the First of August 1566.