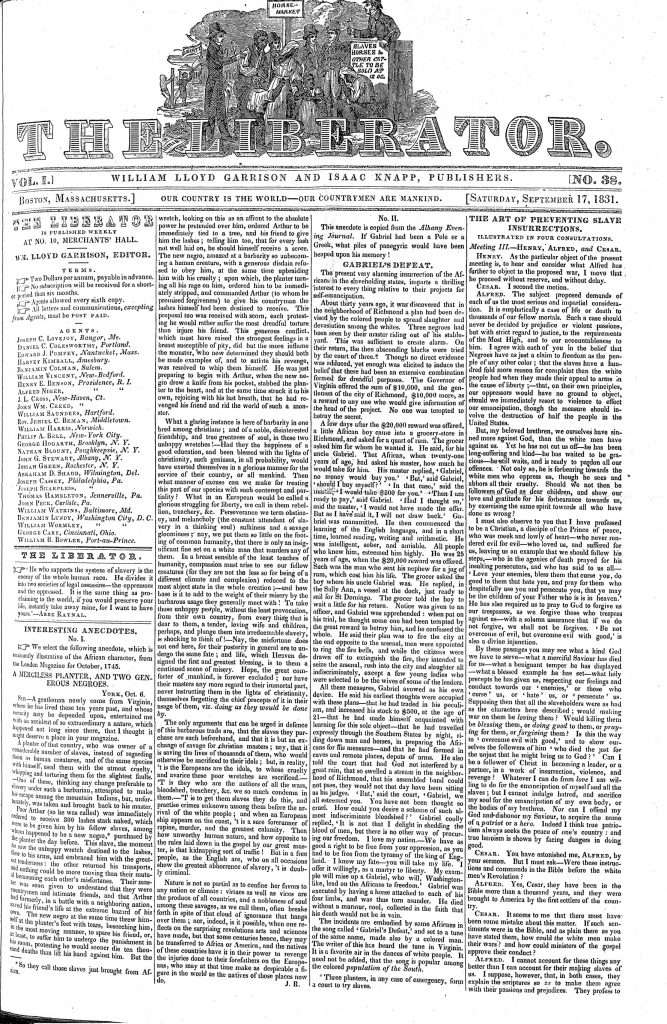 This anecdote is copied from the Albany Evening Journal. If Gabriel had been a Pole or a Greek, what piles of panegyric would have been heaped upon his memory!

The present very alarming insurrection of the Africans in the slaveholding states, imparts a thrilling interest to every thing relative to their projects for self-emancipation.

About thirty years ago, it was discovered that in the neighborhood of Richmond a plan had been devised by the colored people to spread slaughter and devastation among the whites. Three negroes had been seen by their master riding out of his stable-yard. This was sufficient to create alarm. On their return, the then absconding blacks were tried by the court of three.* Though no direct evidence was adduced, yet enough was elicited to induce the belief that there had been an extensive combination formed for dreadful purposes. The Governor of Virginia offered the sum of $10,000, and the gentlemen of the city of Richmond, $10,000 more, as a reward to any one who would give information of the head of the project. No one was tempted to betray the secret.

A few days after the $20,000 reward was offered, a little African boy came into a grocery-store in Richmond, and asked for a quart of rum. The grocer asked him for whom he wanted it. He said, for his uncle Gabriel. That African, when twenty-one years of age, had asked his master, how much he would take for him. His master replied, ‘Gabriel, no money would buy you.’ ‘But,’ said Gabriel, ‘should I buy myself?’ ‘In that case,’ said the master, ‘I would take $500 for you.’ ‘Then I am ready to pay,’ said Gabriel. ‘Had I thought so,’ said the master, ‘I would not have made the offer, but as I have said it, I will not draw back.’ Gabriel was manumitted. He then commenced the learning of the English language, and in a short time, learned reading, writing and arithmetic. He was intelligent, sober, and amiable. All people who knew him, esteemed him highly. He was 25 years of age, when the $20,000 reward was offered. Such was the man who sent his nephew for a jug of rum, which cost him his life. The grocer asked the boy where his uncle Gabriel was. He replied, in the Sally Ann, a vessel at the dock, just ready to sail for St Domingo. The grocer told the boy to wait a little for his return. Notice was given to an officer, and Gabriel was apprehended: when put on his trial, he thought some one had been tempted by the great reward to betray him, and he confessed the whole. He said their plan was to fire the city at the end opposite to the arsenal, men were appointed to ring the fire bells, and while the citizens were drawn off to extinguish the fire, they intended to seize the arsenal, rush into the city and slaughter all indiscriminately, except a few young ladies who were selected to be the wives of some of the leaders.

All these measures, Gabriel avowed as his own device. He said his earliest thoughts were occupied with these plans—that he had traded in his peculiam, and increased his stock to $500, at the age of 21—that he had made himself acquainted with learning for this sole object—that he had travelled expressly through the Southern States by night, riding down man and horses, in preparing the Africans for his measures—and that he had formed in caves and remote places, depots of arms. He also told the court that had God not interfered by a great rain, that so swelled a stream in the neighborhood of Richmond, that his assembled band could not pass, they would not that day have been sitting as his judges. ‘But,’ said the court, ‘Gabriel, we all esteemed you. You have not been thought so cruel. How could you desire a scheme of such almost indiscriminate bloodshed?’ Gabriel coolly replied, ‘It is not that I delight in shedding the blood of men, but there is no other way of procuring our freedom. I love my nation.—We have as good a right to be free from your oppression, as you had to be free from the tyranny of the king of England. I know my fate—you will take my life. I offer it willingly, as a martyr to liberty. My example will raise up a Gabriel, who will, Washington-like, lead on the Africans to freedom.’ Gabriel was executed by having a horse attached to each of his four limbs, and was thus torn asunder. He died without a murmur, cool, collected in the faith that his death would not be in vain.

The incidents are embodied by some Africans in the song called ‘Gabriel’s Defeat,’ and set to a tune of the same name, made also by a colored man. The writer of this has heard the tune in Virginia. It is a favorite air in the dances of white people. It need not be added, that the song is popular among the colored population of the South.

* Three planters, in any case of emergency, form a court to try slaves.

RELATED CONTENT
Categories:
Type:
MAP
TIMELINE
September 17, 1831
In "Gabriel's Defeat," the editors of The Liberator reprint a romanticized account of Gabriel's Conspiracy (1800) that first appeared in the Albany Evening Journal. The context of its publication is the more recent, more successful uprising led by Nat Turner in Southampton County earlier in the year.
FURTHER READING