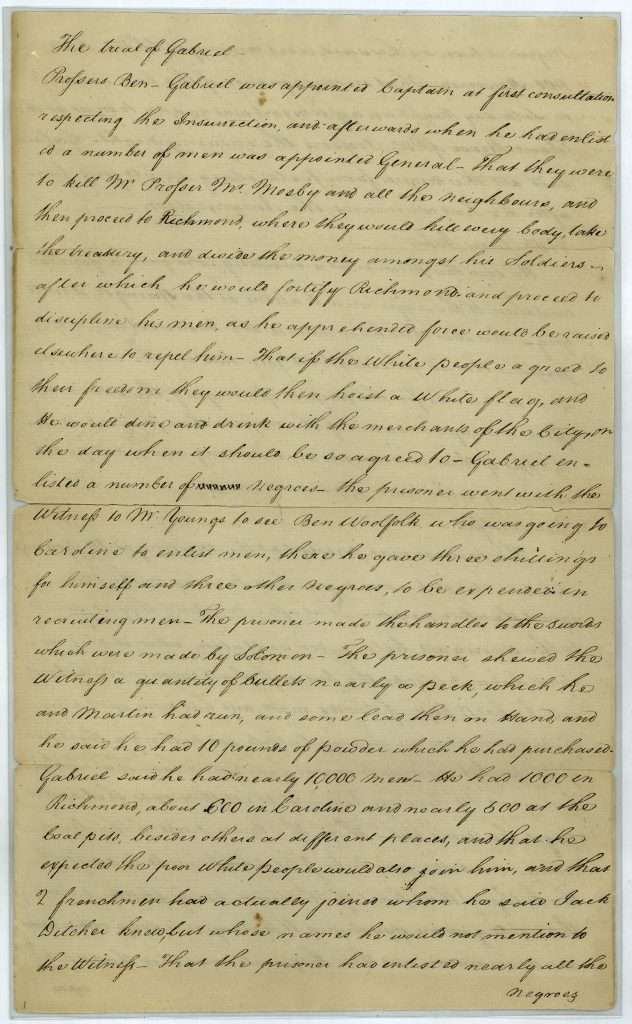 Testimony in the Trial of Gabriel, page 1

The trial of Gabriel

Prossers Ben- Gabriel was appointed Captain at first consultation respecting the Insurrection and afterwards when he had enlisted a number of men was appointed General- That they were to kill Mr Prosser Mr. Mosby and all the neighbours, and then proceed to Richmond, where they would kill every body, take the treasury, and divide the money amongst his Soldiers after which he would fortify Richmond, and proceed to discipline his men, as he apprehended force would be raised elsewhere to repel him- That if the White people agreed to their freedom they would then hoist a White flag, and He would dine and drink with the merchants of the City, on the day when it should be so agreed to- Gabriel enlisted a number of  Negroes- the prisoner went with the Witness to Mr: Youngs to see Ben Woolfolk who was going to Caroline to enlist men, there he gave three shillings for himself and three other Negroes, to be expended in recruiting men- The prisoner made the handles to the swords which were made by Solomon- The prisoner shewed the Witness a quantity of bullets nearly a peck, which he and Martin had run, and some lead then on Hand, and he said he had 10 pounds of powder which he had purchased. Gabriel said he had nearly 10,000 Men- He had 1000 in Richmond, about 600 in Caroline and nearly 500 at the Coal pits, besides others at different places, and that he expected the poor White people would also join him, and that 2 frenchmen had actually joined whom he said Jack Ditcher knew, but whose names he would not mention to the Witness- That the prisoner had enlisted nearly all the 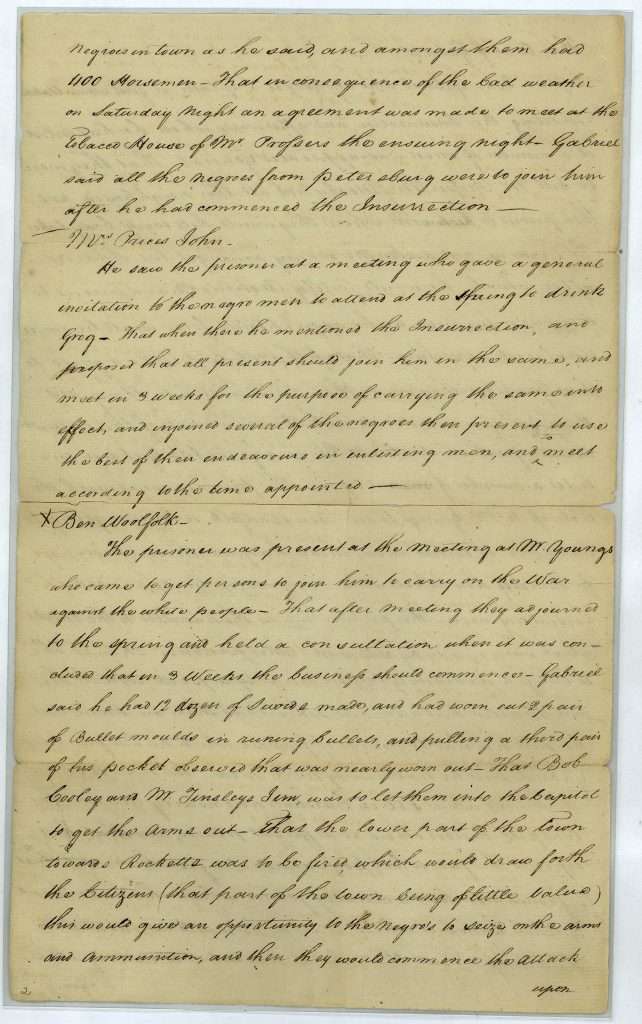 Testimony in the Trial of Gabriel, page 2

Negroes in town as he said, and amongst them had 400 Horsemen- That in consequence of the bad weather on Saturday night an agreement was made to meet at the Tobacco House of Mr Prossers the ensuing night- Gabriel said all the negroes from Petersburg were to join him after he had commenced the Insurrection-

He saw the prisoner at a meeting who gave a general invitation to the negro men to attend at the Spring to drink Grog- That when there he mentioned the Insurrection, and proposed that all present should join him in the same, and meet in 3 weeks for the purpose of carrying the same into effect, and injoined several of the negroes then present to use the best of their endeavours in enlisting men, and to meeting according to the time appointed-

The prisoner was present at the meeting at Mr Youngs who came to get persons to join him to carry on the War against the white people- That after meeting they adjourned to the spring and held a consultation when it was concluded that in 3 Weeks the business hsould commence- Gabriel said he had 12 dozen of swords made, and had worn out 2 pair of Bullet moulds in runing bullets, and pulling a third pair of his pocket observed that was nearly worn out- That Bob Cooley and Mr Tinsleys Jim was to let them into the Capitol to get the arms out- That the lower part of the town towards Rocketts was to be fired, which would draw forth the Citizens (that part of the town being of little value) this would give an opportunity to the negro’s to seize on the arms and ammunition, and then they would commence the attack 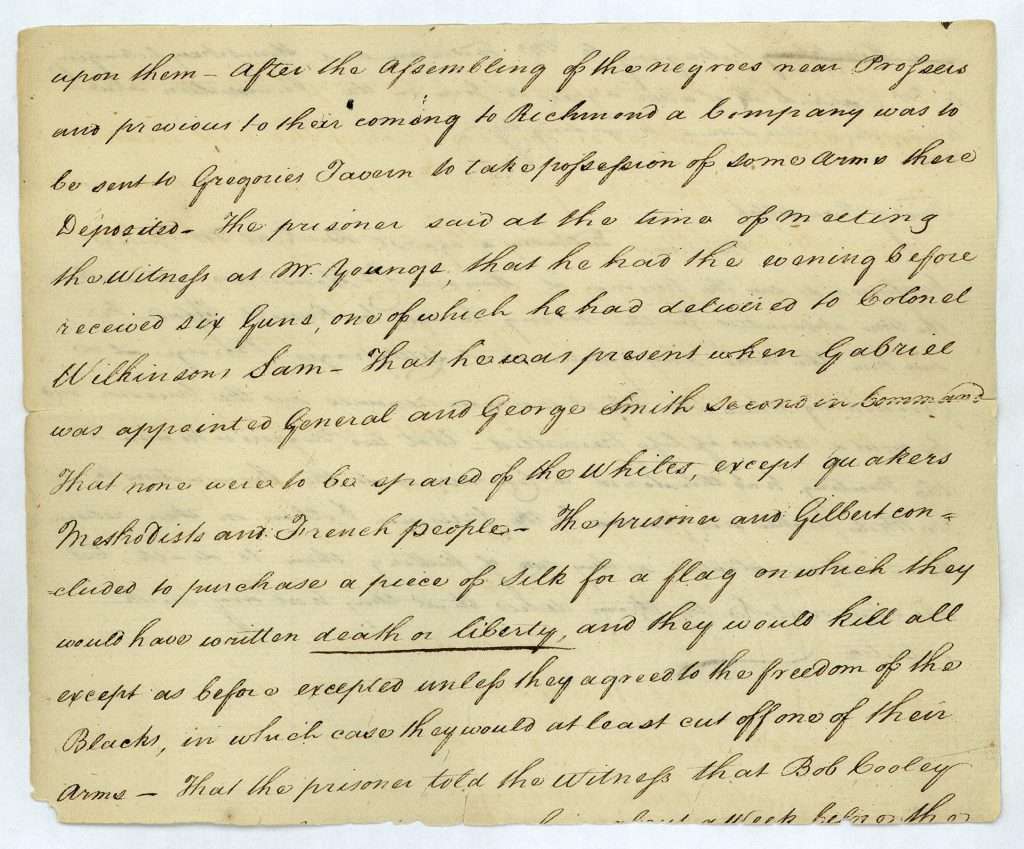 Testimony in the Trial of Gabriel, page 3

upon them- After the Assembling of the negroes near Prossers and previous to their coming to Richmond a Company was to be sent to Gregories Tavern to take possession of some arms there Deposited- The prisoner said at the time of meeting the witness at Mr. Youngs, that he had the evening before received six Guns, one of which he had delivered to Colonel Wilkinson’s Sam- That he was present when Gabriel was appointed General and George Smith second in Command That none were to be spared of the Whites, except quakers  Methodists and French people- The prisoner and Gilbert concluded to purchase a piece of Silk for a flag on which they would have written death or liberty, and they would kill all except as before excepted unless they agreed to the freedom of the Blacks, in which case they would at least cut off one of their Arms- That the prisoner told the Witness that Bob Cooley had told him if he would call on him about a week before the time of the Insurrection, he would untie the Key of the room in which the Arms and Ammunition were kept at the Capitol and give it to him or if he did not come, then on the night of the Insurrection being commenced he would hand him Arms out as fast as he could arm his men, and that he had on s sunday previous to this been shown by Cooley every room in the Capitol.

Ben Woolfolk- The Witness and others in company with the prisoner at Mr. Youngs communicates the insurrection they said they would join- On his way to Caroline he fell in with the prisoner at the bridge (called Littlepages)-He enquired about the business and how they were to get Arms which being mentioned he said he would certainly attend at the time and place appointed that he could and would be at the place of rendezvous by 12 OClock at Night-

Question by the prisoner. Who were present at the Bridge at the of the Conversation above mentioned? Answer. George, Scipio, Edmund, Thornton 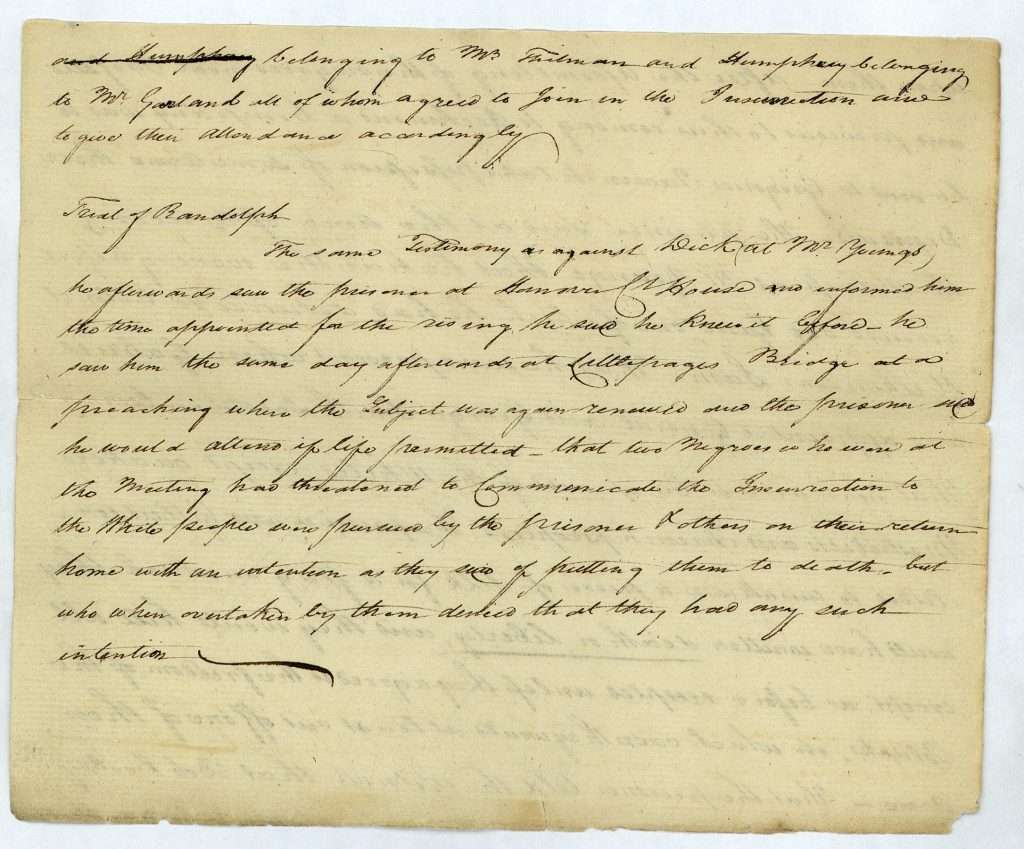 Testimony in the Trial of Gabriel, page 4

The same Testimony as against Dick at Mr Youngs, he afterwards saw the prisoner at Hanover Ct House and informed him the time appointed for the rising he said he knew it before- he saw him the same day afterwards to Littlepages Bridge at a preaching where the Subject was again renamed and the prisoner said he would attend if life permitted- that two Negroes who were at the Meeting had threatened to Communicate the Insurrection to the White people were pursued by the prisoner & others on their return home with an intention as they said of putting them to death- but who when overtaken by them denied that they had any such intention-

[on reverse] Commth v. Gabriel &at. Testimony Oct 6th 1800 No. 11 Record vs Gabriel enclosed within