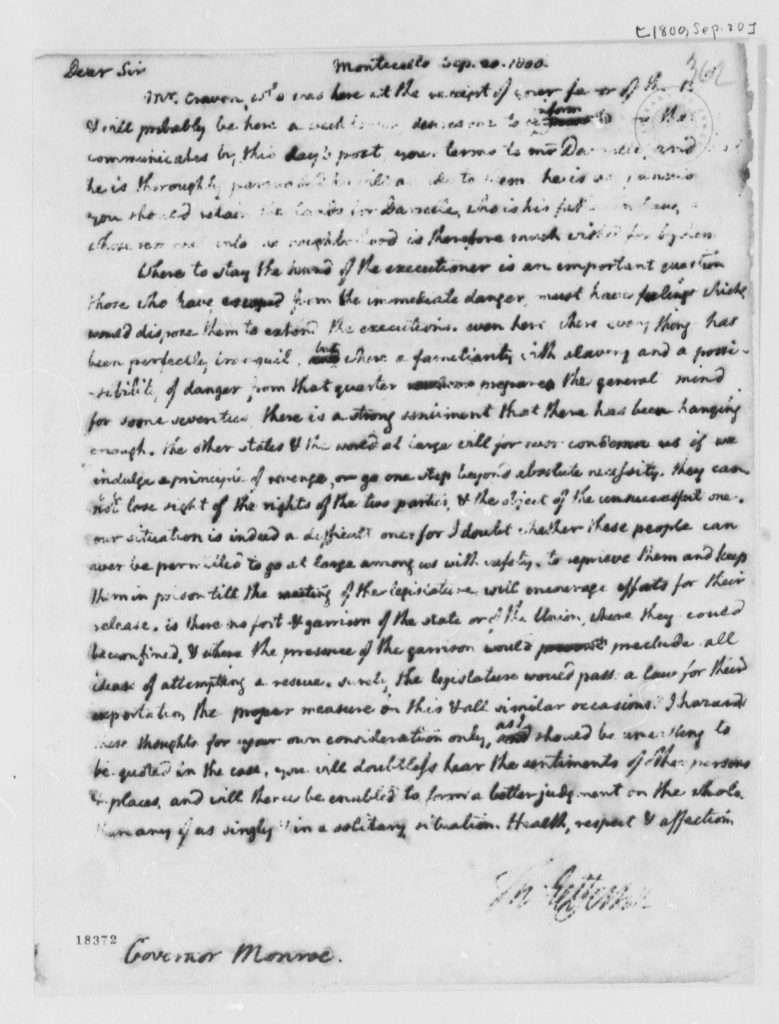 Mr. Craven, who was here at the receipt of your favor of the 15th. & will probably be here a week longer, desires me to inform you that he communicates by this day’s post, your terms to mr Darrelle, and that he is thoroughly persuaded he will accede to them. he is very anxious you should retain the lands for Darrelle, who is his father in law, and whose removal into the neighborhood is therefore much wished for by him.

Where to stay the hand of the executioner is an important question. those who have escaped from the immediate danger, must have feelings which would dispose them to extend the executions. even here, where every thing has been perfectly tranquil, but where a familiarity with slavery, and a possibility of danger from that quarter prepare the general mind for some severities, there is a strong sentiment that there has been hanging enough. the other states & the world at large will for ever condemn us if we indulge a principle of revenge, or go one step beyond absolute necessity. they cannot lose sight of the rights of the two parties, & the object of the unsuccessful one. our situation is indeed a difficult one: for I doubt whether these people can ever be permitted to go at large among us with safety. to reprieve them and keep them in prison till the meeting of the legislature will encourage efforts for their release. is there no fort & garrison of the state or of the Union, where they could be confined, & where the presence of the garrison would preclude all ideas of attempting a rescue. surely the legislature would pass a law for their exportation, the proper measure on this & all similar occasions? I hazard these thoughts for your own consideration only, as I should be unwilling to be quoted in the case; you will doubtless hear the sentiments of other persons & places, and will hence be enabled to form a better judgment on the whole than any of us singly & in a solitary situation. Health, respect & affection.