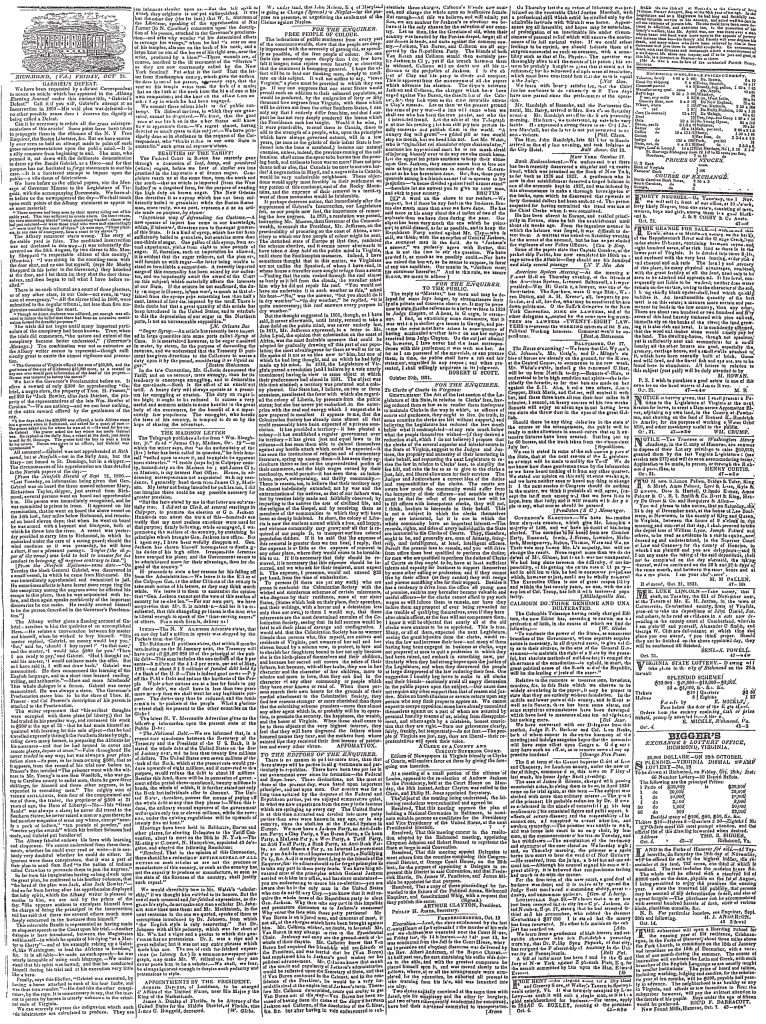 We have been requested by a distant Correspondent to notice an article which has appeared in the Albany Evening Journal under this curious title, “Gabriel’s Defeat.” Call it [what] you will, Gabriel’s attempt at an Insurrection in 1800—His wild plan was defeated—in no other possible sense does it deserve the dignity of being called a Defeat.

Can it be necessary to refute all the gross misrepresentations of this article? Some pains have been taken to propagate them in the columns of the N. Y. Free Enquirer, the Boston Liberator, &c. But we have scarcely ever seen so bold an attempt made to palm off such gross misrepresentations upon the public mind.—It is a silly romance from beginning to end. The man, who penned it, sat down with the deliberate determination to dress up the Bandit Gabriel, as a Hero—and for that purpose has not hesitated to forge statements to suit his case.—It is a barefaced attempt to impose upon the public—a vile tissue of fabrications.

We have before us the official papers, viz: the Message of Governor Monroe to the Legislature of Virginia, with the accompanying Documents. We have also before us the newspapers of the day—We shall touch upon such points of the Albany statement as appear to us most material:

“Three negroes had been seen by their master riding out of his stable yard. This was sufficient to create alarm. On their return, the then absconding blacks” (what absconding blacks?—those who had just returned—or were those tried who were still absconding?)—”were tried by the court of three.” (A note says, “Three planters, in any case of emergency, form a court to try slaves.”)

The Albany romancer starts wrong. The story of the stable yard is false. The meditated insurrection was not disclosed in this way—It was voluntarily discovered on the 30th August, by two slaves to Mr. Mosby Sheppard “a respectable citizen of this county,” (Henrico.) “I was sitting in the counting-room with the door shut, and no one but myself; (says Mr Mosby Sheppard in his letter to the Governor,) they knocked at the door, and I let them in; they shut the door themselves, and then began to tell what I have before recited.”

There is no such tribunal as a court of three planters, or of any other class, in our Code—not even, in “any case of emergency.”—All the slaves tried in 1800, were submitted to the regular tribunal, not less than five magistrates constituting the court.

“Though no direct evidence was adduced, yet enough was elicited to induce the belief that there had been an extensive combination formed for dreadful purposes.”

The trials did not begin until many important particulars of the conspiracy had been known. True; when the trials did commence, “the nature and extent of the conspiracy became better understood,” (Governor’s Message.) The combination was not so extensive as the Albany writer seems to represent—though sufficiently great to excite the utmost vigilance and precaution.

“The Governor of Virginia offered the sum of $10,000, and the gentlemen of the city of Richmond $10,000 more, as a reward to any one who would give information of the head of the project.—No one was tempted to betray the secret.”

We have the Governor’s Proclamation before us. It offers a reward of only $300 for apprehending “Gabriel, a negro slave, the property of Thos. H. Prosser,” and 300 for “Jack Bowler, alias Jack Ditcher, the property of the representatives of the late Wm. Bowler of Caroline.”—We see nothing—and we can hear nothing, of the extra reward offered by the gentlemen of the city.

“A few days after the $20,000 was offered, a little African came into a grocery store in Richmond, and asked for a quart of rum—The grocer asked him for whom he wanted it—He said for his uncle Gabriel. The grocer asked the boy where his uncle Gabriel was. He replied in the Sally Ann, a vessel at the dock, just ready to sail for St. Domingo. The grocer told the boy to wait a little for his return. Notice was given to an officer, and Gabriel was apprehended.”

All romance!—Gabriel was not apprehended at Richmond, but at Norfolk—not in the Sally Ann, but the Mary—not bound to St. Domingo, but in a skipper.—The circumstances of his apprehension are thus detailed in the Norfolk papers of the day:—

[From the Norfolk Herald of Sept. 21, 1800.—”Last Tuesday, on information being given that Gen. Gabriel was on board the three masted schooner Mary, Richardson Taylor, skipper, just arrived from Richmond, several persons went on board and apprehended him. His person was immediately recognised, and he was committed to prison in irons. It appeared on his examination, that he went on board the above vessel on the 14th inst., four miles below Richmond, and remained on board eleven days; that when he went on board he was armed with a bayonet and bludgeon, both of which he threw into the river. A vessel was yesterday provided to carry him to Richmond, in which he embarked under the care of a strong guard; should the wind continue as it was yesterday, he will have a short, if not a pleasant passage. Taylor (the skipper of the vessel) was held to bail to answer to his conduct in bringing off negroes contrary to law.”]

[From the Norfolk Epitome—same date.—”On Tuesday the black General Gabriel, was discovered in a small vessel, in which he came from Richmond. He was immediately apprehended and committed to jail. He sometimes affects to have learnt more respecting the late conspiracy among the negroes since he effected his escape to this place, than he was acquainted with before, and then again speaks confidently of the important discoveries he can make. He readily avowed himself to be the person described in the Governor’s Proclamation.”]

The Albany writer gives a flaming account of Gabriel—ascribes to him the qualities of an accomplished Hero.—He relates a conversation between his master and himself, when he wished to buy himself. “His master replied, ‘Gabriel, no money would buy you.’ ‘But,’ said he, ‘should I buy myself?’ ‘In that case,’ said the master, ‘I would take $500 for you.’ ‘Then I am ready to pay,’ said Gabriel. ‘Had I thought so,’ said his master, ‘I would not have made the offer. But as I have said it, I will not draw back.’ Gabriel was manumitted. He then commenced the learning of the English language, and in short time learned reading, writing, and arithmetic.”—More and more falsehoods! This whole dialogue is a fiction. Gabriel was never manumitted. He was always a slave. The Governor’s Proclamation states him to be the slave of Thos. H. Prosser—and Col. Prosser’s description of his person is attached to the Proclamation.

The writer represents that “his earliest thoughts were occupied with these plans (of liberty;) that he had traded in his peculiar way, and increased his stock to $500 at the age of 21—that he had made himself acquainted with learning for this sole object—that he had travelled expressly through the Southern States by night, riding down many horses, in preparing the Africans for his measures—and that he had formed in caves and remote places, depots of arms.”—False throughout! He never traded in any way; but was always a poor plantation slave—So poor, so far from owning $500, that as it appears, from the record of his trial now before us, Prosser’s Ben testified “The prisoner went with the witness to Mr. Young’s to see Ben Woodfolk, who was going to Caroline county to enlist men, there he gave three shillings, for himself and three other negroes, to be expended in recruiting men.” The mighty sum of three shillings, from four of the conspirators! and one of them, the trader, the proprietor of $500 at 21 years of age, the Hero of Liberty!—No—This “Great Bandit” was always a slave; he never did travel to the Southern States; he never raised a man or a gun there; he had no other magazine of arms any where, except “nearly a peck of bullets, “ten pounds of powder,” and “twelve scythe swords” which his brother Solomon had made, and Gabriel put handles to!

The Albany fabulist endows his hero with learning and eloquence. We cannot understand from these documents, whether he could ever read or write—it is certainly very doubtful whether he could do either. So ignorant were these conspirators, that it was a part of their plan to send Sam Bird “to the nation of Indians called Catawbas to persuade them to join the negroes.”

So far from his imagination having so long dwelt upon the great plan, he confessed to his brother Solomon, that “the head of the plan was Jack, alias Jack Bowler.”—And so far from having after his apprehension displayed that lofty spirit, which the Albany writer is pleased to ascribe to him, we are told by the prints of the day: “He appears anxious to exculpate himself from the charge of being the principal in the insurrection; and has said that there are several others much more deeply concerned in the business than himself.”

The miserable Bandit is represented as having made an eloquent speech to the Court upon his trial.—Another dialogue is here introduced, between the Magistrates and himself—in which he speaks of his dying “as a Martyr to liberty”—and of his example raising up a Gabriel, like Washington, to lead the Africans to freedom,” &c. It is all fable—he made no such speech—he was utterly incapable of using such language.—We understand that his spirit was bowed; and that he conducted himself during his trial and at his execution very little like a hero.

Finally, says this libeller, “Gabriel was executed, by having a horse attached to each of his four limbs, and was thus torn asunder.”—He died like the other conspirators, by the rope. It is unnecessary to say, that the tearing to pieces by horses is utterly unknown to the criminal code of Virginia.

We can scarcely repress the indignation which such vile fabrications are calculated to produce. They are an infamous slander upon us.—But the fell spirit in which they originate is not yet extinguished. It was but the other day (the 1st inst.) that W. L. Garrison of the Liberator, speaking of the apprehension of Nat Turner (in N. Carolina!) comments upon the description of his person, attached to the Governor’s proclamation—and asks why wonder “at his determined efforts to revenge his wrongs,” when he had “a scar on one of his temples, also one on the back of his neck, and a large knot on one of the bones of his right arm, near the wrist, produced by a blow?”—These wounds are, of course, ascribed to the ill treatment of the “Slavists” as they are now courteously called by the New York Sentinel! But what is the fact? That the letter from Southampton county, which gave the authentic description of his person, expressly says, that the scar on his temple came from the kick of a mule; that on the back of the neck from the bite of one of his own companions; and the knot on the elbow from an other fray in which he had been engaged.

We commit these odious libels to the public contempt. The illiberal motives, in which they are generated cannot be disguised.—We trust, that the good sense of our brethren in the other States will know how to appreciate them.—We regret almost, having devoted so much space to this subject.—We have principally done so in obedience to the request of the Correspondent, who “thinks it due to our State to contradict” such gross misrepresentations.

RELATED CONTENT
Categories:
Type:
MAP
TIMELINE
October 21, 1831
In "Gabriel's Defeat," the editors of the Richmond Enquirer seek to correct the facts in an article of the same title published in the Albany Evening Journal. The subject is Gabriel's Conspiracy, an attempted slave uprising in 1800.
FURTHER READING