Jabez Lamar Monroe Curry was born on June 5, 1825, in Lincoln County, Georgia. He was the son of William Curry, a merchant and member of the state legislature, and his first wife, Susan Winn Curry. As a young man he changed his middle name from Lafayette to Lamar. His mother died in 1827, and two years later his father married a widow with one son. Curry was educated in the local schools and for one year at Willington Academy, a school in Abbeville County, South Carolina, established by the noted educator Moses Waddel. In 1838 Curry’s family moved to Talladega County, Alabama. 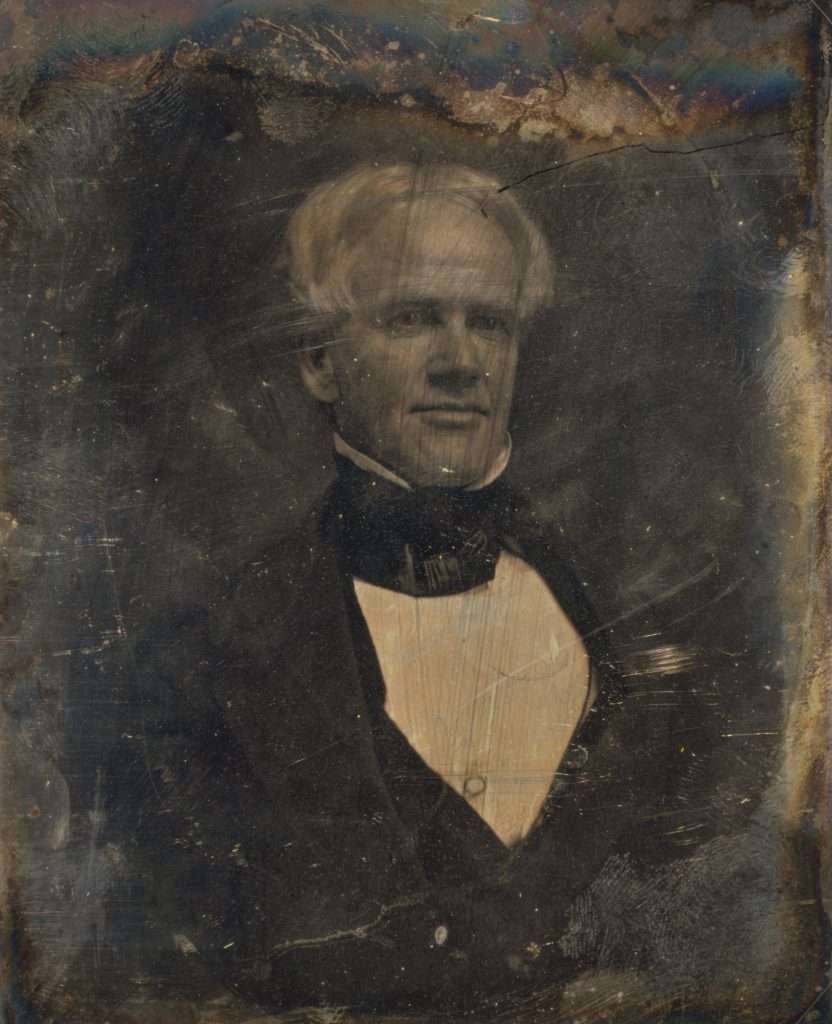 The following year Curry entered Franklin College (later the University of Georgia), where he excelled in debating and was elected orator during his junior and senior years. He graduated in 1843 and later that year entered the law school of Harvard University, where he studied with Simon Greenleaf and Joseph Story, the latter an associate justice of the Supreme Court of the United States. Curry’s classmates included Rutherford B. Hayes, and while in Massachusetts he heard speeches by the radical abolitionist William Lloyd Garrison, the common-school reformer Horace Mann, and the Unitarian minister Theodore Parker. After receiving a law degree in 1845, Curry continued his legal studies in Alabama. He served briefly as a private in a Texas company during the war with Mexico, but he returned home to attend to an ill compatriot before he saw any action. In 1846 Curry was admitted to the Talladega County bar and during the next few years settled into the life of a southern gentleman. He practiced law and operated a plantation, worked at the time of the Civil War by about fifty slaves.

Curry married Ann Alexander Bowie on March 4, 1847. Of their four children, one son and one daughter survived childhood. Dissatisfied with farming and the law and fired by sectional controversies, Curry entered politics as a member of the states’ rights wing of the Alabama Democratic Party. Elected to represent Talladega County in the Alabama House of Representatives for biennial terms in 1847, 1853, and 1855, he favored aid to railroads and advocated the establishment of state-supported common schools. Curry was a presidential elector for James Buchanan in 1856 and won election the following year from Alabama’s Seventh Congressional District to the U.S. House of Representatives. He quickly developed a reputation for oratory and as an able defender of southern interests. During his two terms Curry delivered several addresses that asserted slavery’s central importance to the national, and not just the southern, economy, blasted northern Republicans for their attempts to bar the spread of slavery, and predicted that abolition would result in a decline of character and productivity among southern blacks. 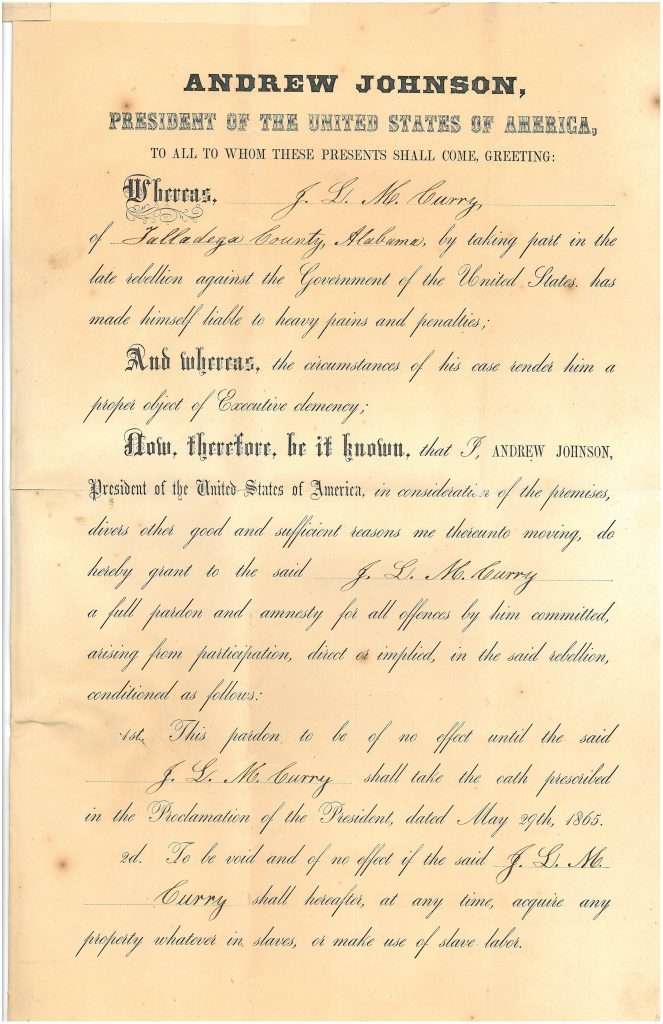 After the election of Abraham Lincoln intensified the sectional crisis, Alabama named Curry its commissioner to Maryland to urge that state’s governor and legislature to side with other slaveholding states. When Alabama seceded from the Union in January 1861, Curry resigned from the U.S. Congress and was elected a deputy to the Provisional Confederate Congress, which met in Montgomery, Alabama. He won election to the First Confederate Congress, which assembled in Richmond in February 1862. Curry became Speaker pro tempore of the House of Representatives in 1863 and in that capacity has been credited with authorship of the Address of Congress to the People of the Confederate States, in which the Confederate Congress reviewed the causes of the Civil War, its goals in the struggle, and the North’s stubborn refusal to negotiate a peace. In August 1863 Curry lost his bid for reelection, and later that year he failed in his attempt to be elected to the Confederate States Senate. After his term in Congress ended he prosecuted home-front disloyalty as a habeas corpus commissioner. He served as special aide to General Joseph Eggleston Johnston and to Major General Joseph Wheeler and finished the war as a lieutenant colonel commanding the 5th Alabama Cavalry. Curry was paroled in Alabama on May 13, 1865. Almost simultaneously with the defeat of the Confederacy, his wife died on April 8, 1865.

Immediately after the Civil War, the Baptist Church provided the venue for most of Curry’s professional activities. He had joined the denomination in 1847 and been active in local Alabama Baptist associations. Curry was elected president of the Alabama State Baptist Convention in 1865 and also became president of Howard College (later Samford University), a Baptist-affiliated institution in Marion, Alabama. Ordained a Baptist minister in January 1866, he regularly preached in various pulpits and was twice reelected president of the state convention.

On June 25, 1867, Curry married Mary Wortham Thomas, daughter of a prosperous Richmond merchant. They had no children. The next year he left Howard College to join the faculty of Richmond College (later the University of Richmond), where he taught English, moral philosophy, and constitutional and international law. Curry was a popular professor and remained a dynamic Baptist leader and Sunday school organizer, both locally and nationally. He served as president of the Baptist General Association of Virginia for five years during the 1870s, as president of the National Baptist Sunday School Convention, and as president of the Foreign Mission Board from 1871 to 1872 and again from 1874 to 1885. 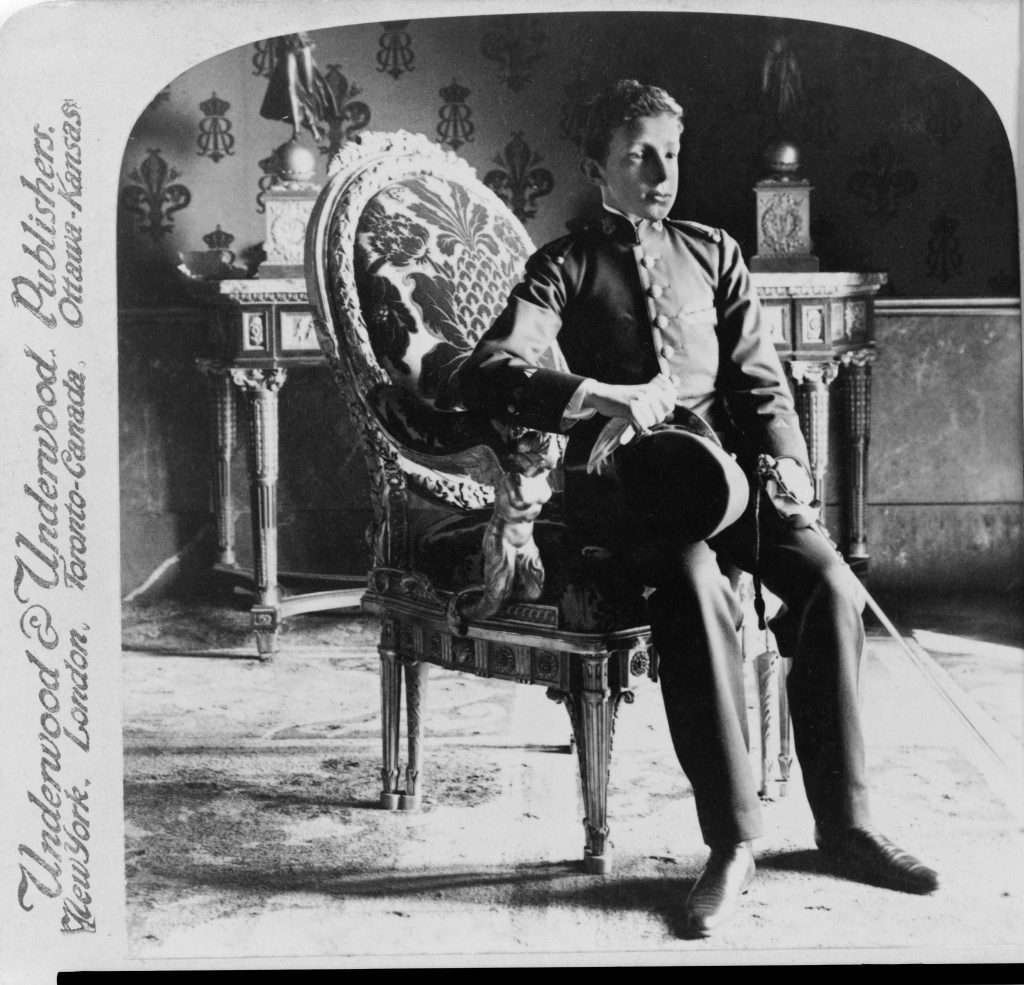 Although not particularly active in Virginia politics, Curry sided with the Funders in their struggle with the Readjusters in the debate about public finance and repayment of the state debt late in the 1870s. Disenchanted after Readjusters swept to power in 1879, Curry continued to look for opportunities for public service and in October 1885 accepted an appointment by President Grover Cleveland as American minister to Spain. Curry served in Madrid until July 5, 1888, and in May 1902 President Theodore Roosevelt named him the American special envoy for ceremonies marking King Alfonso XIII’s coming of age as the Spanish monarch.

Curry’s most notable accomplishments were in the field of public education. In 1881 he resigned from the Richmond College faculty to become general agent of the Peabody Education Fund (named for its founder, the Massachusetts financier and philanthropist George Peabody), which sought to stimulate the expansion of common schools in the South largely through improving the training of teachers and establishing state-funded normal schools. In November 1890 Curry accepted an offer from the John F. Slater Fund for the Education of Freedmen to chair its education committee. In effect the fund’s general agent, he assumed his new duties the following year.

Established in 1882, the Slater Fund was then the most important southern philanthropy dedicated to African American education. Under Curry’s leadership the fund focused its resources on a small number of institutions that emphasized industrial schooling, a blend of manual training and moral improvement that in the last decades of the nineteenth century achieved popularity at such institutions as Hampton Normal and Agricultural Institute (later Hampton University) and Tuskegee Normal and Industrial Institute (later Tuskegee University). Throughout the 1890s he often visited southern schools supported by the Peabody and Slater Funds and made numerous public addresses about educational improvement.

As efforts at school improvement expanded across the South, Curry developed contacts with other incipient reformers throughout the region. Eventually, a full-scale crusade emerged in 1898 with the first of several Conferences for Education in the South, held at Capon Springs in Hampshire County, West Virginia. Although not present at the conference’s first meeting, Curry was chosen vice president. The following year he was elected president and delivered a keynote address proposing a transformation of southern white public education. Curry believed that education of African Americans was important but declared that a greater need existed for improvements in schools for white students. As he stated, “The white people are to be the leaders, to take the initiative, to have the directive control in all matters pertaining to civilization and the highest interests of our beloved land.”

When the conference met in Winston-Salem, North Carolina, in April 1901, Curry served on the Committee on Platform and Resolutions, which outlined the establishment of what became the Southern Education Board, a coordinating council of educational reformers that represented southern whites and northern philanthropists. He subsequently helped to establish the General Education Board, which, with the support of John D. Rockefeller, soon became the best-financed and most professionally managed northern philanthropy involved in southern social policy.

By 1900 Curry had become the nation’s best-known advocate of southern education. He had participated early in the 1880s in the unsuccessful campaign for congressional passage of a bill to provide money to states with high rates of illiteracy. His credentials among white southerners were unassailable, and he worked effectively with post-Reconstruction Redeemer regimes. At the same time, though he did not favor integrated or equal schools for white and black children, he supported basic justice for African Americans. Curry vigorously opposed efforts to fund racially segregated public schools based on the actual tax contributions of the members of each race, a breakdown that would have drastically reduced tax support for black schools. His main weapon in the educational campaign remained his oratory, which he used with great effectiveness. In the decades after the Civil War he addressed all of the state legislatures of the South, some of them multiple times.

As Curry’s speaking ability became legendary, he also wrote prolifically. Along with numerous addresses that appeared in pamphlet form or as articles in educational journals, he published widely on government and history topics. His most significant works include Constitutional Government in Spain (1889), William Ewart Gladstone (1891), The Southern States of the American Union Considered in Their Relations to the Constitution of the United States and to the Resulting Union (1894), and Civil History of the Government of the Confederate States with Some Personal Reminiscences (1901).

During the time Curry lived in Richmond, he served as an officer of the Virginia Historical Society and as a visitor of the Medical College of Virginia. After he resigned from the faculty of Richmond College he became a member of its governing board and served until his death. In 1902 the College of William and Mary chapter elected him a member of Phi Beta Kappa. 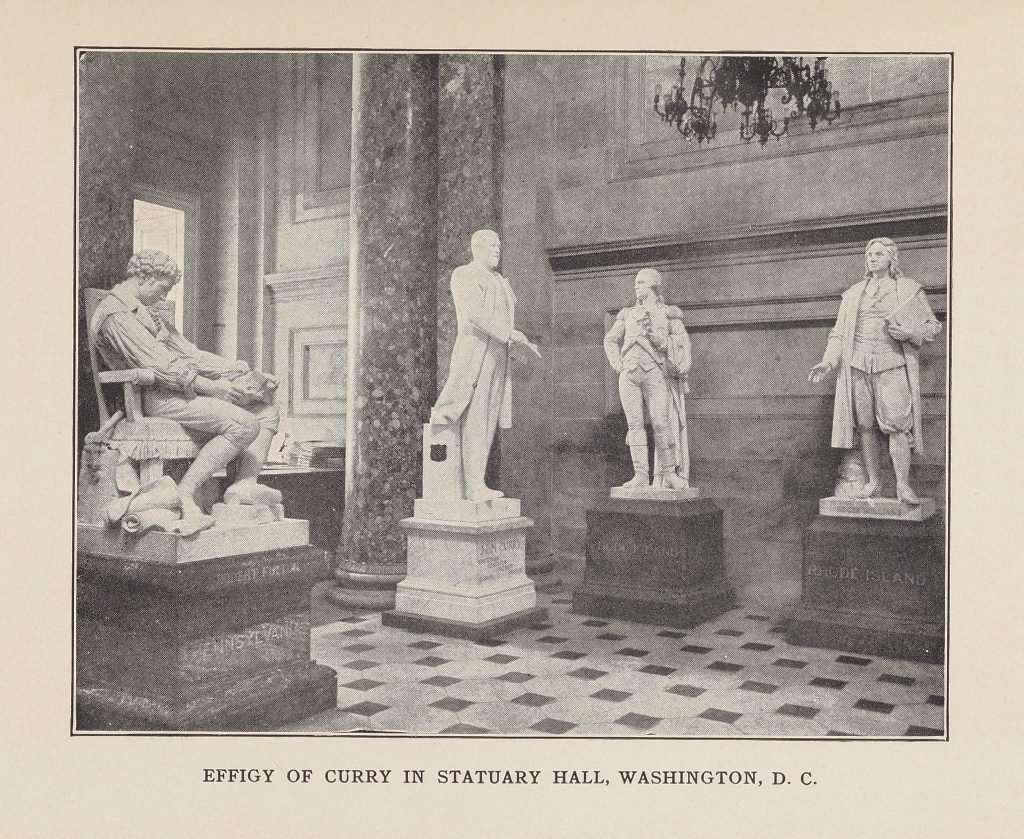 By the mid-1890s Curry had moved to Washington, D.C. After a long struggle with Bright’s disease, he died on February 12, 1903, at the home of his brother-in-law near Asheville, North Carolina. Following a funeral in the chapel of Richmond College, he was buried in the city’s Hollywood Cemetery. The school of education at the University of Virginia is named in his honor.