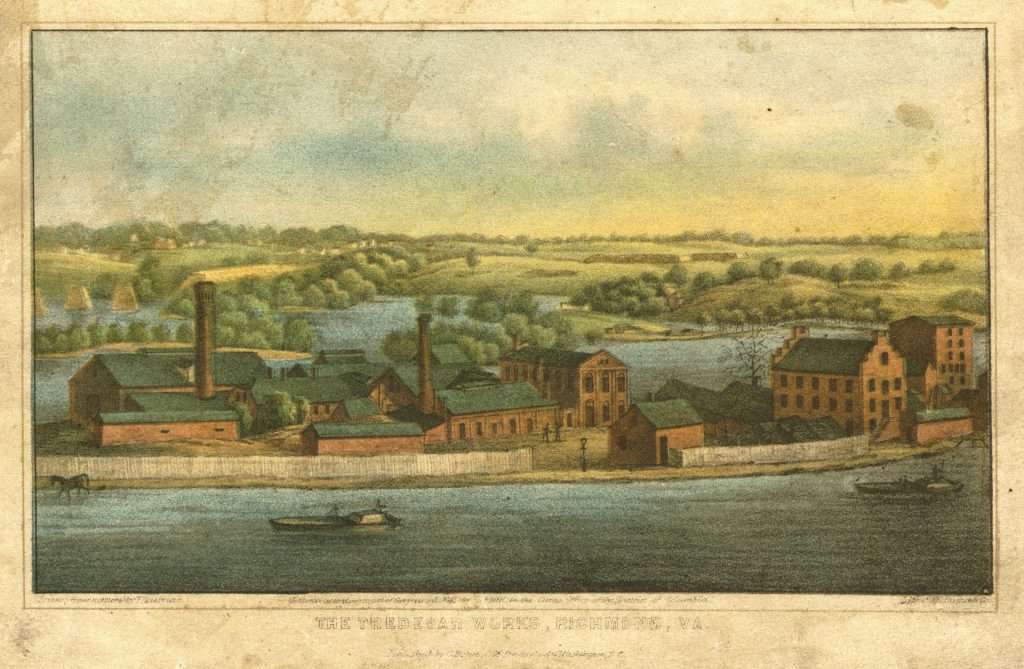 Cox was born in the mid-1830s in Powhatan County. He may have been the son of a free black named Joseph Cox. His mother’s name is not known for certain, but she may have been Lizza Smith, a free woman of color who late in 1836 married a Joe Cox in Powhatan County. It is likely that Cox was closely related to Henry Cox, a Powhatan native a few years older than he who served four terms in the House of Delegates beginning in 1869. The details of Cox’s early life are not known. By 1850 he had most likely moved to Richmond with his father, who was a laborer in the city. Cox worked for a time in a tobacco factory and for nine years in the rolling mills on Belle Isle and at the Tredegar ironworks. Like many other free blacks in Richmond, he held a variety of odd jobs. Later recollections reported that he had at one time been a bartender, a day laborer, and a huckster. The 1860 census listed Cox as a blacksmith. By June of that year he had married a woman named Eliza, whose maiden name is not known and who worked as a washer. They had at least one daughter.

After the Civil War, Cox took advantage of his relative prosperity and assumed a leadership role in Richmond’s African American community. Buoyed by Emancipation but hampered by a devastated economy, discriminatory policies, and white hostility, Richmond blacks created a network of secret societies that provided relief aid and offered a platform for addressing grievances. Cox emerged as president of one of the largest such organizations, the Lincoln Union Aid Society. He may also have headed up a mounted militia unit, three of whose members attempted to integrate a Richmond streetcar in April 1867. Cox’s leadership within the black community did not escape the notice of federal authorities. After Congress passed the First Reconstruction Act in March 1867, an officer of the Bureau of Refugees, Freedmen, and Abandoned Lands identified Cox as a local leader who could take the ironclad oath and therefore serve in government. In the spring of 1867 he sat on the petit jury called to hear the case against former Confederate president Jefferson Davis on charges of treason.

Cox helped organize the Union Republican Party in Virginia. Despite efforts of more-conservative Unionists to promote a Republican Party that might prove more appealing to native Virginia whites, radical activists, particularly those in Richmond, succeeded in forging an organization that pushed for a decisive break from the past. Aligning himself with the more-radical faction, Cox in April 1867 was a Richmond delegate to the party’s state convention, which adopted an egalitarian platform. During that summer he bolstered his position within the party’s Richmond organization, perhaps by marginalizing centrist black leaders, such as Fields Cook and John Oliver. He also canvassed outlying rural areas to strengthen the party there. A meeting of Republicans in Richmond’s Madison Ward in September 1867 named Cox to a committee created to coordinate party-building with committees from other city wards. He was also elected vice president of the Republican organization in Monroe and Fifth wards. Grounding his radical policy goals with an inclusive political sensibility, he cooperated with centrists when appropriate and sought the participation of prominent white Unionists.

Cox’s hard work was rewarded on October 14, 1867, when a convention of city Republicans nominated him and four other candidates (one black, three white) as delegates to a statewide convention called to write a new constitution for Virginia. Richmond’s African American population mobilized and by a margin of 404 votes elected the Radical Republican slate, which also received 48 votes from whites. The defeated Conservative candidates alleged fraud but failed to overturn the results. Meeting from December 3, 1867 to April 17, 1868, the convention developed a constitution that granted universal manhood suffrage, instituted a public school system, reorganized the state’s system of local government, and proposed disfranchising Confederate loyalists.

Cox sat on the Committees on the Legislative Department and on County and Corporation Courts and County Organizations, as well as on the Committee on Finance, which had a largely organizational function within the convention. Taking great interest in issues associated with the franchise, Cox introduced four resolutions that supported Radical measures on suffrage. Other than a few procedural statements, however, he was silent on other issues. He consistently supported the Radical majority in every major vote without becoming a lightning rod for the Conservative opposition. On April 17, 1868, Cox joined other Republican delegates in approving the new constitution, which voters ratified without the disfranchising provisions in July 1869. 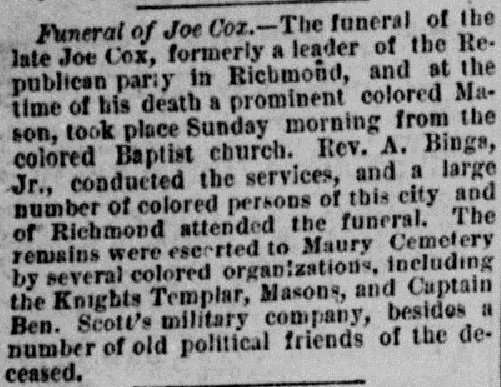 After the convention Cox chaired local meetings of Republicans and African American groups and also officiated at public celebrations. The power of grassroots activists in the Republican Party was declining, however. As white centrists consolidated control over the party and as Conservatives reasserted their power in Richmond, Cox seems to have refocused most of his efforts on nonpartisan movements devoted to improving the economic and political standing of blacks. In April 1870 he became a vice president of the Richmond chapter of the Colored National Labor Union. Cox numbered among the approximately 100 African American delegates from across the state who met in Richmond in August 1875 to address the lack of jobs and to advance the interests of Virginia blacks. He received a patronage appointment as janitor of the customs house, a position he held throughout much of the decade. Cox died of consumption (probably tuberculosis) on April 16, 1880, at the Manchester home of his sister. A reported 3,000 people turned out to pay their respects two days later when he was buried at Mount Olivet Cemetery, in the section of Chesterfield County that in 1914 became part of the city of Richmond.

RELATED CONTENT
Categories:
Type:
MAP
TIMELINE
Mid-1830s
Joseph Cox is born in Powhatan County. He may be the son of a free black named Joseph Cox. His mother's name is not known for certain, but she may be Lizza Smith, a free woman of color.
1850
By this year Joseph Cox mostly likely has moved to Richmond with his father, who is a laborer in the city.
1860
The census lists Joseph Cox as a blacksmith in Richmond.
June 1860
By this time Joseph Cox has married a woman named Eliza, whose maiden name is unknown and who works as a washer. They will have at least one daughter.
Spring 1867
Joseph Cox sits on a petit jury called to hear the case against the former Confederate president Jefferson Davis on charges of treason. The trial is never held.
April 1867
Three members of a mounted black militia unit, possibly commanded by Joseph Cox, attempt to integrate a Richmond streetcar.
April 1867
Joseph Cox is a Richmond delegate to the Republican Party state convention.
September 1867
A meeting of Republicans in Richmond's Madison Ward names Joseph Cox to a committee created to coordinate party-building with committees from other city wards. He is also elected vice president of the Republican organization in Monroe and Fifth wards.
October 14, 1867
A convention of Richmond Republicans nominates John C. Underwood, James W. Hunnicutt, Lewis Lindsey, James Morrissey, and Joseph Cox as delegates to a statewide convention called to write a new constitution for Virginia.
December 3, 1867—April 17, 1868
Joseph Cox, a representative from Richmond to the constitutional convention, serves on the Committees on the Legislative Department and on County and Corporation Courts and County Organizations, as well as on the Committee on Finance, which has a largely organizational function within the convention.
April 17, 1868
Joseph Cox joins other Republican delegates in approving the new state constitution.
July 6, 1869
Voters ratify a new state constitution without the provisions to disfranchise Confederate veterans.
April 1870
Joseph Cox becomes a vice president of the Richmond chapter of the Colored National Labor Union.
August 1875
Joseph Cox numbers among the approximately 100 African American delegates from across Virginia who meet in Richmond to address the lack of jobs and to advance the interests of the state's blacks.
April 16, 1880
Joseph Cox dies of consumption (probably tuberculosis) at the Manchester home of his sister.
April 18, 1880
Joseph Cox is buried at Mount Olivet Cemetery in Chesterfield County (later Richmond). A reported 3,000 people turn out to pay their respects.
FURTHER READING
CITE THIS ENTRY