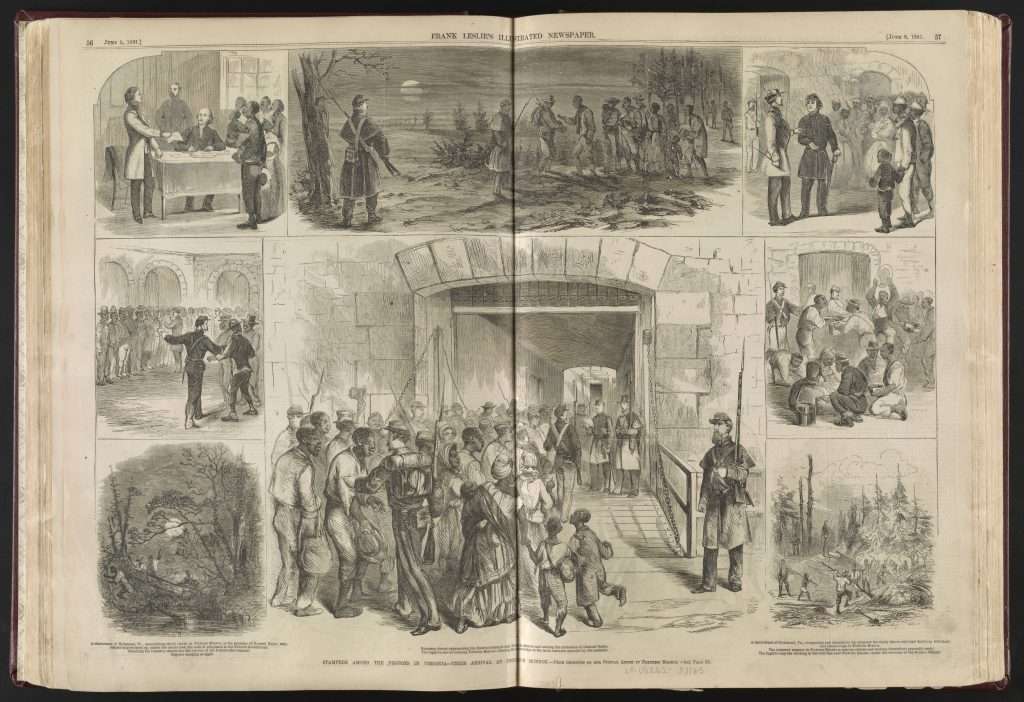 Thousands of enslaved people in effect freed themselves during the Civil War by escaping into areas where the Union army permitted them to live as if free. That began soon after the start of the war, when people living near Hampton sought refuge in the army camp at Fort Monroe. As more and more men, women, and children entered the camps, the army eventually adopted policies that protected the liberty of people who escaped from slavery. Other sites in Virginia became safe places for people seeking freedom, including the grounds of Robert E. Lee‘s mansion, Arlington, across the Potomac River from Washington, D.C. It is likely that more men than women or children found or made opportunities to free themselves during the war. Tabulations of the numbers of enslaved men subject to being forced to labor for the Confederacy suggest that a significant number of them escaped or failed to return home and that they gained their freedom even as Confederate authorities relied on them to support the Confederate military effort. 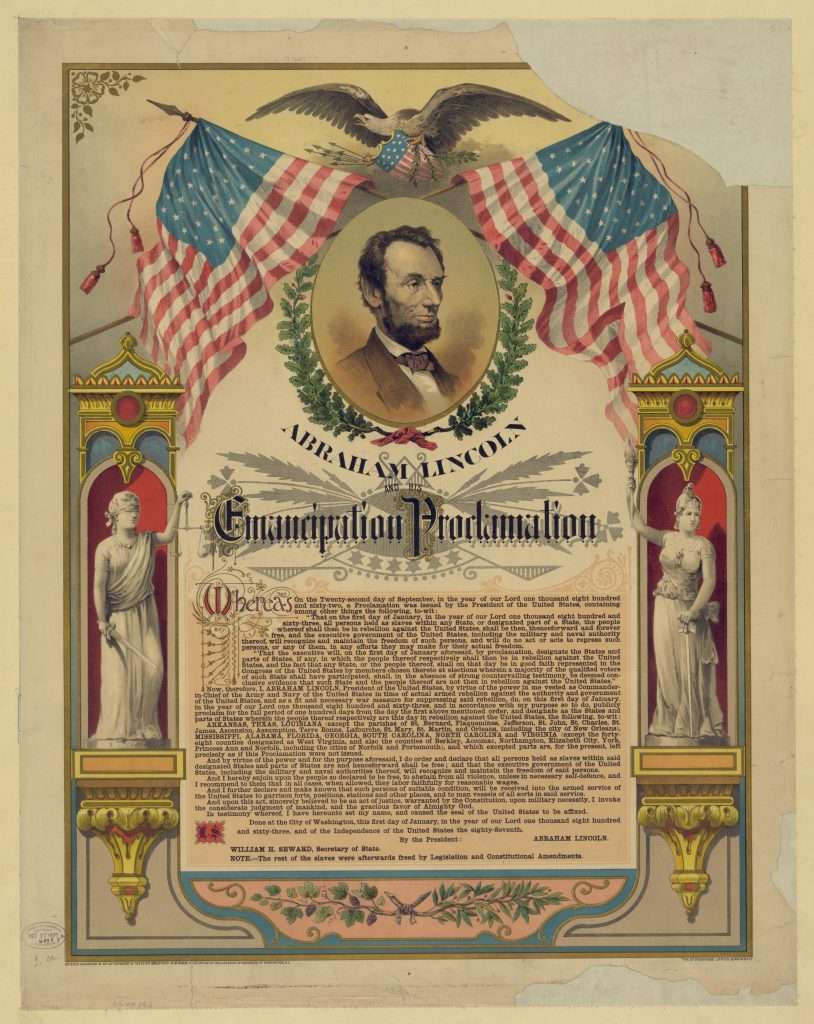 Abraham Lincoln and His Emancipation Proclamation

The Emancipation Proclamation that President Abraham Lincoln issued on January 1, 1863, declared free the enslaved people who resided in the states that were “in rebellion against the United States.” In reality, the proclamation freed only the enslaved people where the Union army could enforce the proclamation. It also exempted several parishes in Louisiana, the Virginia counties that were soon to become the state of West Virginia, and a small number of other Virginia counties.

By the time Lincoln issued the proclamation it was clear that the western portion of Virginia would soon be a separate state with a new name. Before admitting West Virginia to the Union as of June 20, 1863, Congress required that its proposed constitution be amended to abolish slavery. The gradual emancipation provision added to the West Virginia Constitution specified that every person born after July 4 of that year would be born free, that enslaved children younger than ten on that date would become free at age twenty-one, and that enslaved people between the ages of ten and twenty-one on that date would become free at age twenty-five. The West Virginia Constitution of 1863 left in lifetime slavery all of the enslaved people in western Virginia who were then older than twenty-five. But when the West Virginia legislature ratified the Thirteenth Amendment on February 3, 1865, it also passed a bill immediately abolishing slavery in the state.

The exemptions in the Emancipation Proclamation allowed slavery to continue under the laws of Virginia in the upper Potomac River Valley county of Berkeley (which with Jefferson County later voted to join West Virginia), in the two Eastern Shore counties of Accomack and Northampton, and in the Hampton Roads counties of Elizabeth City, Norfolk, Princess Anne, and York, and in the cities of Norfolk and Portsmouth. In those areas the established presence of the Union army had already allowed people who ran away from slavery to live in virtual freedom. In the remainder of Virginia, the Union army when it was present, or perhaps in a few instances the United States Navy, attempted to enforce the terms of the Emancipation Proclamation, which freed an un-tabulated number of enslaved Virginians.

The Emancipation Proclamation directly influenced how slavery ended in Virginia but not by freeing all of the state’s slaves. Instead, it created unusual legal problems for one of the two governments of the Commonwealth of Virginia. Some Virginians who remained loyal to the United States had created a new state government in the summer of 1861 and restored part of Virginia to the Union. During the Civil War there were two states of Virginia, each with its own government. One state was part of the Confederate States of America and had its capital in Richmond . The other remained part of the United States of America and had its capital in Wheeling until June 1863 and thereafter in Alexandria. Senators and representatives from Virginia served in the U.S. Congress during the first years of the Civil War.

Admission of West Virginia to the Union confined the effective jurisdiction of the Restored government of Virginia to the eastern areas of the state where the Union army and navy were in control of the countryside: on the Eastern Shore, in the Hampton Roads area, and in several counties bordering the Potomac River. The governor and General Assembly of the Restored government continued to function under the Virginia Constitution of 1851 that prohibited them from doing anything significant about slavery. That placed the state government and the army in potential conflict with respect to enslaved people who were within the state’s jurisdiction and also in areas where the army was in control. In December 1863, Governor Francis H. Pierpont asked the General Assembly to provide for a constitutional convention to abolish slavery. On March 10, 1864, members of the Constitutional Convention that met in Alexandria voted 15 to 1 in favor of abolishing slavery. Article IV, Section 19, of the Virginia Constitution of 1864 proclaimed that “Slavery and involuntary servitude (except for crime) is hereby abolished and prohibited in the State forever.” Article IV, Section 20, permitted courts to apprentice African American children on the same conditions that courts imposed for apprenticing white children. Article IV, Section 21, stated, “the General Assembly shall make no law establishing slavery or recognizing property in human beings.”

The provision of the new Virginia constitution that prohibited slavery could be enforced only in the relatively small portion of the whole state. As a result, it almost certainly did not free all of the enslaved people or end slavery even in the counties and cities represented in the convention or in the General Assembly of the Restored government. In the rest of what remained Virginia, the Emancipation Proclamation could be enforced only where the United States Army could make it stick. In most of Virginia a majority of the men, women, and children who had lived in slavery when the Civil War began continued to live in slavery until the war ended in April 1865. At that time, the army began to enforce the Emancipation Proclamation throughout Virginia. 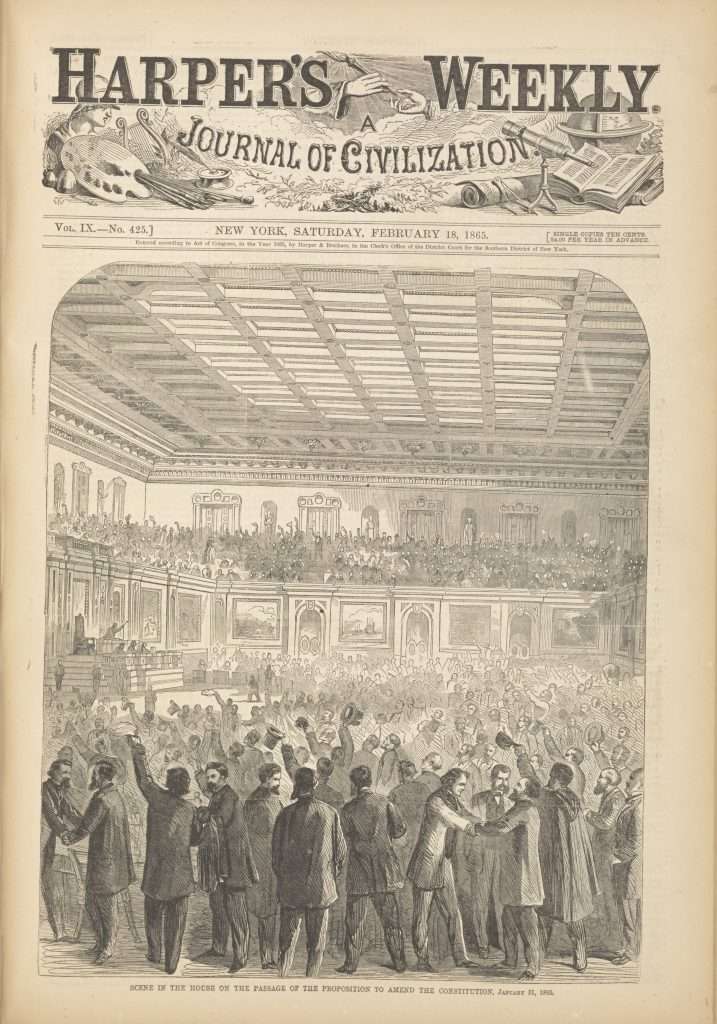 Scene in the House on the Passage of the Proposition to Amend the Constitution, January 31, 1865.

The government of the Confederate state of Virginia ceased to function, and with that the Constitution of 1851 expired because no government enforced it and no people obeyed it. The Restored government operating under the Constitution of 1864 became the only government of Virginia. Slavery legally ended in Virginia then because that constitution prohibited it, and together with the ability of the army to enforce the Emancipation Proclamation, that led very speedily to the freeing of all enslaved Virginians. In the meantime, on February 8 and 9, 1865, the two houses of the General Assembly of the Restored government had ratified the Thirteenth Amendment to the U.S. Constitution. When proclaimed in effect with Virginia’s ratification counted as the twelfth of the required twenty-seven state legislatures, it abolished and permanently prohibited slavery everywhere in the United States.