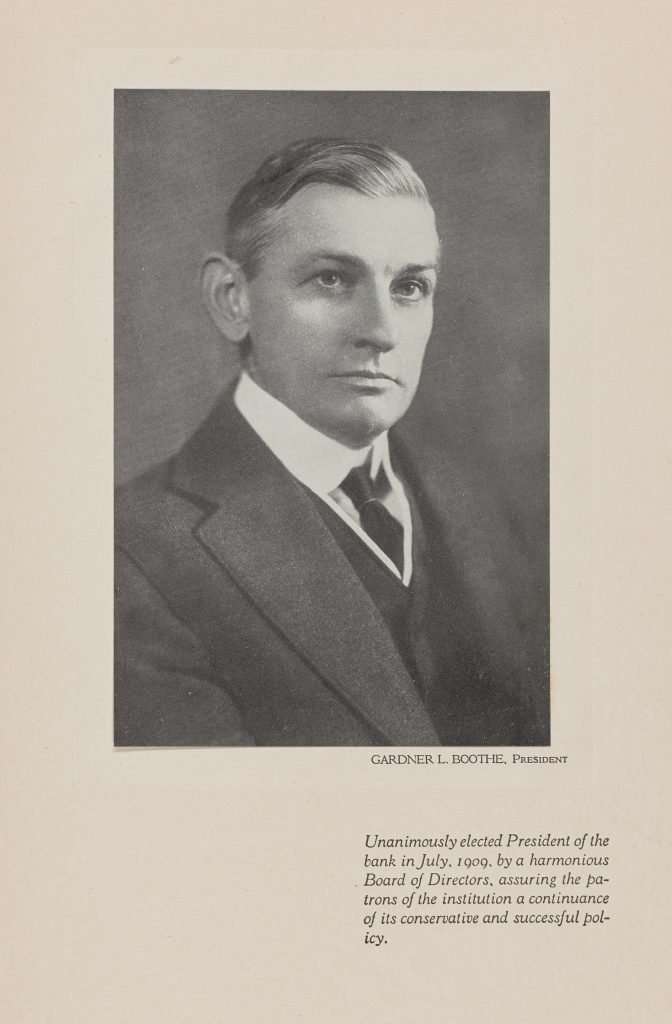 Armistead Lloyd Boothe was born on September 23, 1907, in Alexandria, the son of Gardner Lloyd Boothe, a Democratic Party leader, and Eleanor Harrison Carr Boothe. After receiving his primary education in the Alexandria public schools he graduated with honors from that city’s Episcopal High School in 1924. Boothe enrolled in the University of Virginia in a program that combined a three-year undergraduate course with two years of legal instruction. Graduating as a Phi Beta Kappa in 1928, he was selected as a Rhodes Scholar and spent two years studying law at Oxford University. On June 30, 1934, in Washington, D.C., Boothe married Elizabeth Ravenel Peelle. They had three daughters.

In 1931 Boothe entered his father’s law firm. He became a member of the Alexandria Democratic Committee in 1935 and in 1936 worked as an attorney in the United States Department of Justice. Boothe served from 1939 to 1942 as Alexandria city attorney but left that post for service as a naval air combat intelligence officer in the Pacific Theater during World War II (1939–1945). While aboard the USS Hornet, Boothe had a conversation with a visiting naval officer, Harry F. Byrd Jr., that in view of the rest of his political career was ironic and fateful. Byrd’s father, a governor and longtime U.S. senator, headed the dominant faction of the state’s Democratic Party. Byrd suggested that Boothe seek state office after the war. 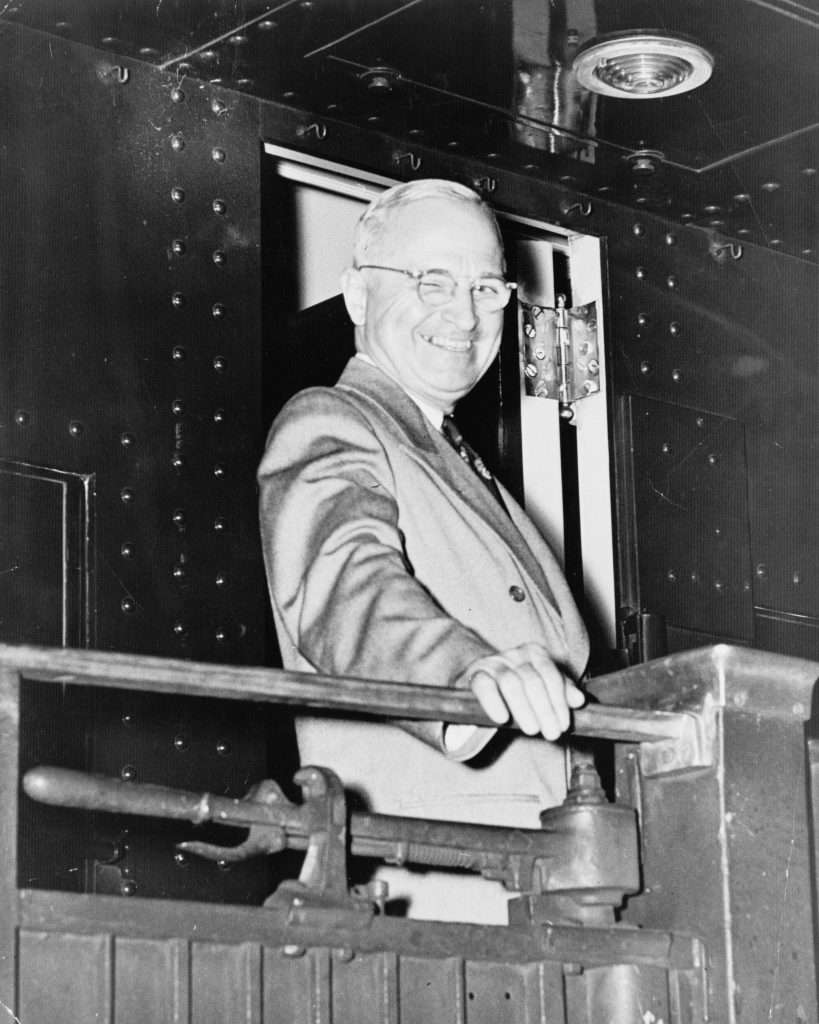 Boothe followed the suggestion and in 1947 won election to represent Alexandria in the House of Delegates. He began his legislative career in the 1948 General Assembly session. For four terms he served on the Committees on Counties, Cities, and Towns, on Currency and Commerce, on Executive Expenditures, and on General Laws. Although affiliated with the Byrd Organization, Boothe showed his independence. Persuaded to cosponsor a bill that would have kept President Harry S. Truman’s name off the 1948 presidential ballot in Virginia, he thought he had been tricked and helped weaken the bill so much that even though it passed it did not have the intended effect. Leaders of the party, including Boothe’s father, had endorsed the bill. Boothe soon took positions favoring a more generous provision of state services and a more liberal policy on race relations than the conservative General Assembly leadership found acceptable.

By early in the 1950s Boothe and Stuart B. Carter, of Fincastle, were leading a group of legislators called the Young Turks. Many of them were World War II veterans elected by the state’s growing urban and suburban areas. They formed, in effect, an embryonic progressive wing in the Byrd Organization. Most of the measures that they advocated did not pass, but their occasional successes included forcing a legislative reapportionment, securing greater funds for education, and, in a symbolic gesture, gaining Virginia’s assent to the Nineteenth Amendment in 1952. In one of their most significant victories, the Young Turks in 1954 deadlocked the General Assembly for hours past its scheduled adjournment and won a compromise by which a portion of the state’s surplus revenue was devoted to increased funding of services rather than being returned in its entirety as a tax refund. 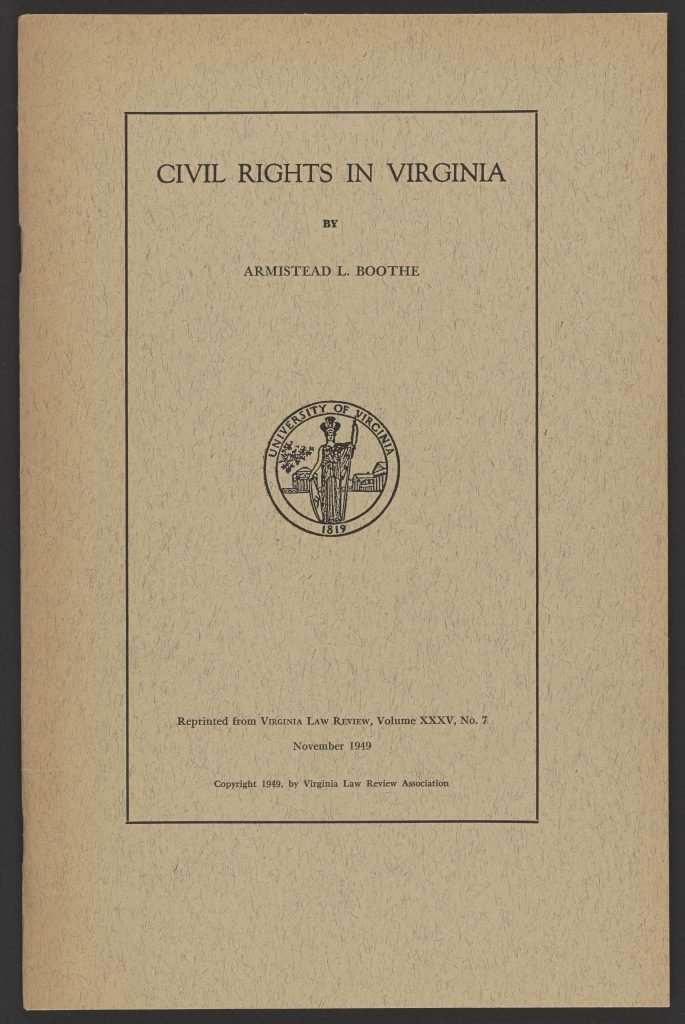 Boothe made his definitive break with the Democratic Party organization over the issue of racial segregation. In a 1949 article in the Virginia Law Review, he argued that enforcing Virginia’s racial segregation statutes was expensive and demeaning. In a prescient passage citing a trend in recent U.S. Supreme Court cases, he predicted that the Court would soon declare public school segregation unconstitutional. Boothe recommended that Virginia gradually dismantle the state’s legal code of segregation. In the 1950 and 1952 assembly sessions he introduced bills to abolish segregation on common carriers and to establish an interracial study group on race relations, but conservatives blocked both proposals.

Early in 1954 Boothe advised the state even more forcefully that school segregation would soon be declared illegal and urged it to prepare for the inevitable transition rather than let change be imposed by the federal government. Legislative leaders again ignored his warnings and sidetracked his bill to establish a race relations study group. After the Supreme Court did declare racially segregated public schools unconstitutional, Boothe acted swiftly. Within a month he sent out a questionnaire surveying the opinions of his legislative colleagues, and by October he had offered his own desegregation plan. Boothe centered his approach on a pupil assignment system designed to limit desegregation to a few students in regions where breaking the color line might be acceptable to the white majority. After his election in 1955 to represent Alexandria in the Senate of Virginia, Boothe joined with Republican Theodore Roosevelt Dalton in proposing a pupil assignment plan permitting limited desegregation. By then Senator Harry F. Byrd Sr. had issued his call for Massive Resistance to block all desegregation. A strong supporter of public education, Boothe rejected state tuition grants to parents who enrolled their children in segregated private schools, and he led the opposition to these grants in a referendum on January 9, 1956, on the subject. 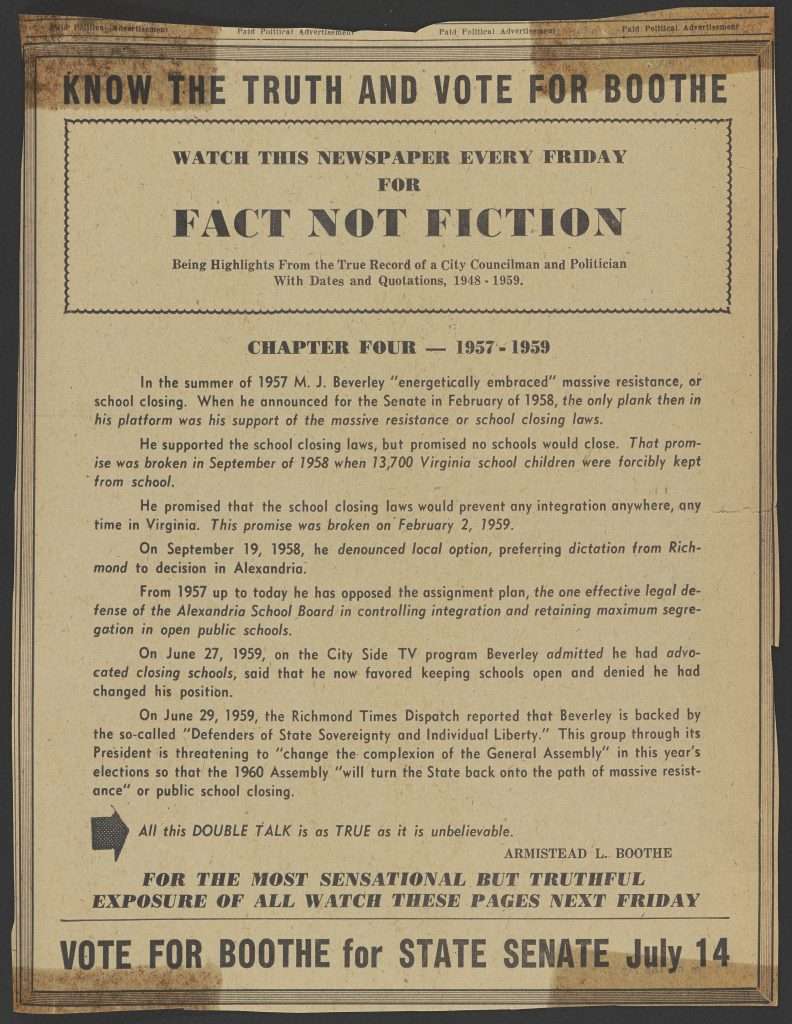 Know the Truth and Vote for Boothe

In January 1959 both state and federal courts declared unconstitutional a central tactic of the Massive Resistance strategy, closing schools that were under court orders to desegregate. Boothe again advanced his assignment plan as an alternative. In the April 1959 legislative special session he voted for the package of measures that Governor J. Lindsay Almond proposed. This retreat from Massive Resistance cleared the legislature by only one vote. A professed supporter of segregation even as he opposed Massive Resistance as a threat to the public schools, Boothe became a target for organized segregationists, who strongly backed his conservative opponent in the July 1959 Democratic primary. Despite their efforts, Boothe easily won reelection to the Senate of Virginia. During his two four-year Senate terms he served on the Committees to Examine the Bonds of Public Officers, on Federal Relations, on Insurance and Banking, and on Welfare.

Boothe also sat on the Virginia Code Commission during his service in both houses of the assembly. In 1961 he ran for lieutenant governor. School desegregation and many of the earlier concerns of the Young Turks were major issues. Attacking his Democratic primary opponent, Mills E. Godwin Jr., as a Massive Resister and a threat to public education, Boothe advocated increased spending for the schools. Although he received a larger vote than either of his running mates, Boothe lost to Godwin (who had Byrd’s support) by a margin of 46 percent to 54 percent.

Armistead Boothe’s 1966 Primary Campaign
In 1963 Boothe decided against seeking a third term in the state senate, but in 1966 he ran in the Democratic primary against Harry F. Byrd Jr. for the nomination to fill the United States Senate seat from which Byrd’s father had retired. Campaigning on such issues as “one man, one vote” and diplomatic recognition for China and against Byrd’s ultraconservative state record, Boothe received the support of more than 49 percent of the electorate, losing by a mere 8,225 votes. That was his last campaign for elective office, but he remained active politically.

Armistead L. Boothe Favors Lowering the Voting Age
After he survived major heart surgery in 1969, Boothe decided to devote the remainder of his career to church work, and he accordingly gave up his law practice at the firm of Boothe, Dudley, Koontz, Blankenship, and Stump. An active Episcopal layman throughout his life, he served six years as director of development at the Protestant Episcopal Theological Seminary (or Virginia Theological Seminary) in Alexandria and four years more as assistant to the seminary’s dean. In 1976 Boothe’s work for the seminary led him to endorse Byrd, his former opponent, who was successfully seeking reelection to the United States Senate. Although they still disagreed on social matters, Byrd had supported Boothe’s position that contributions to colleges should remain tax deductible.

Without bitterness at the frustrations in his political career, Boothe retained a lively interest in public affairs until his final illness, a long struggle with Alzheimer’s disease. Boothe died in an Episcopal retirement center in Falls Church on February 14, 1990, and was buried in the cemetery at Virginia Theological Seminary in Alexandria.