Trist was born in Charlottesville on June 2, 1800, and was the son of Hore Browse Trist and Mary Louisa Brown Trist. The family had a long and close relationship with Thomas Jefferson, beginning when Jefferson served as a member of the Continental Congress and lodged in the Philadelphia boarding house of Trist’s great-grandmother. During this period he established a lifelong friendship with Trist’s grandmother, Elizabeth House Trist. After Trist’s grandfather, Nicholas Trist, died in 1784, Jefferson, then serving as minister plenipotentiary in France, helped her secure an inheritance for their son, Hore Browse Trist. As president, Jefferson named him collector of taxes for the District of Mississippi and late in 1803 for New Orleans, where he died of yellow fever in August 1804.

Trist’s mother later married Philip Livingston Jones and after his death in 1810 Trist added Jones’s first name to his own. She then married wealthy planter Eteinne St. Julien de Tournillon, who managed his inherited plantations while he attended Orleans College. Late in the summer of 1817 Trist made his first trip to Thomas Jefferson’s Albemarle County home, Monticello, while his grandmother was making one of her long visits to Virginia. Trist spent several weeks with Jefferson’s family and fell in love with Jefferson’s granddaughter Virginia Jefferson Randolph. Persuaded to postpone marriage until after Trist completed his education and began a career, he attended the U.S. Military Academy at West Point from 1818 through 1821 but did not graduate. Returning to Louisiana, he studied law and managed the family plantations while keeping up a correspondence with Virginia Randolph and other members of her family. Trist and Randolph married at Monticello on September 10, 1824. They had one daughter and two sons.

Trist remained at Monticello to study law under Jefferson and occasionally serve as his clerk. Trist was present in the last hours before Jefferson’s death on July 4, 1826, and was one of three administrators of the financially troubled estate. For the next two years Trist was secretary to the University of Virginia’s board of visitors and was co-owner and co-editor of a Charlottesville newspaper, the Virginia Advocate. His relationship with Jefferson and the support of Jefferson family friends helped him to secure a clerkship in the Department of State in 1828. Trist developed a close friendship with President Andrew Jackson, vigorously supported his policies, and served briefly as Jackson’s private secretary in 1831. In April 1833 Secretary of State Edward Livingston appointed Trist consul at Havana, Cuba, and the president later nominated and the Senate confirmed him to that post early the following year.

Trist was intelligent, well-read, spoke both Spanish and French fluently, and possessed a highly developed sense of honor and duty. He could also be high-handed, arrogant, and overly sensitive. Those traits got him in trouble while he was consul. In 1839 several American merchants and ships’ captains called for his removal and waged a newspaper war against him, accusing him of neglecting his consular duties, of corruption and abuse of power, and of working in support of the slave trade. The principal issues were Trist’s interference with shipboard discipline and authority structures, the legality of the ownership of some of the vessels that passed through the port of Havana, and whether such ships rightfully sailed under the American flag. Trist returned to Washington in March 1840 and turned over a trunk of consular records and correspondence for congressional review. The House of Representatives concluded that there was no cause for further action against him. Nevertheless, Trist was recalled after the election of Whig Party candidates William Henry Harrison and John Tyler in 1841. 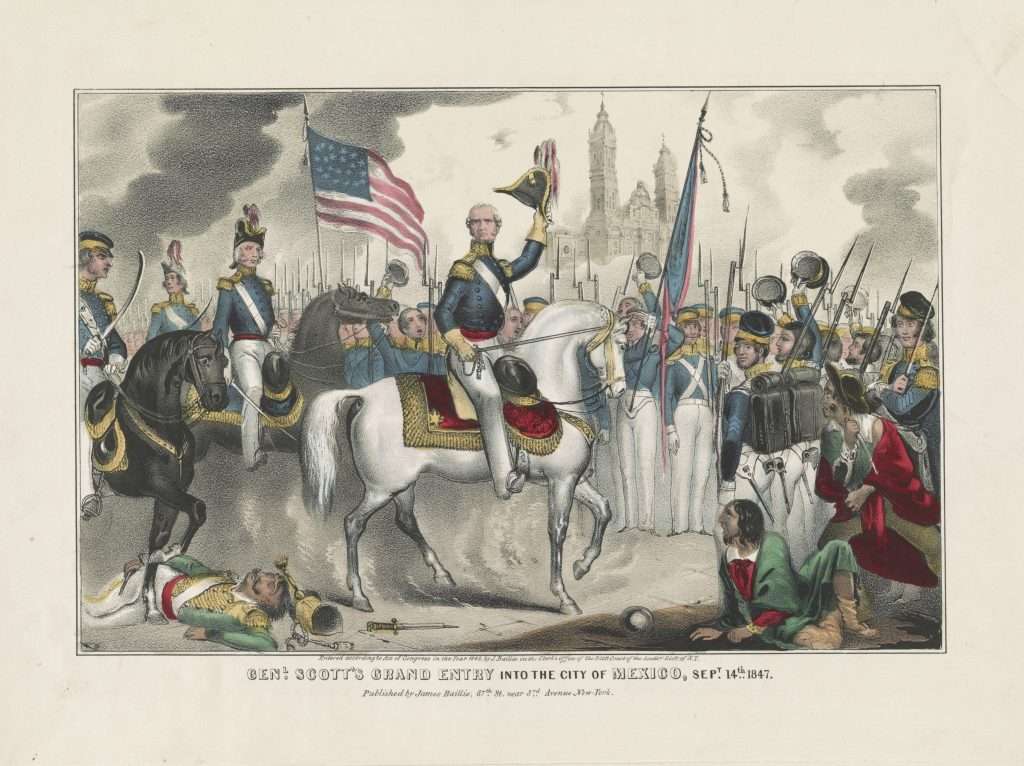 Trist resided on a farm outside Havana until 1845 when President James K. Polk appointed him chief clerk of the Department of State. In April 1847 Polk sent him to Mexico, clothed him with full diplomatic powers, and instructed him discreetly to negotiate an end to the war between the two countries. When Trist arrived in Vera Cruz, General Winfield Scott misunderstood the purpose of his mission, and Trist did little to explain it, creating a conflict of personalities and egos that nearly caused the failure of Trist’s mission. After months of open hostility, the two men reconciled and worked together militarily and diplomatically to achieve peace on the terms Polk sought. At the end of August, when Trist presented Polk’s draft treaty to Mexican commissioners, they objected to the proposed new boundary between the nations and suggested alternatives. Frustrated but hopeful, Trist ignored letters of recall he received from the impatient Polk and engaged in a months-long process of negotiation that concluded in February 1848 with the Treaty of Guadalupe Hidalgo, which added more than 500,000 square miles to the United States. Although the treaty achieved Polk’s objectives and the Senate ratified it, Polk reprimanded Trist and ordered him home, denying him his salary and compensation for his expenses. 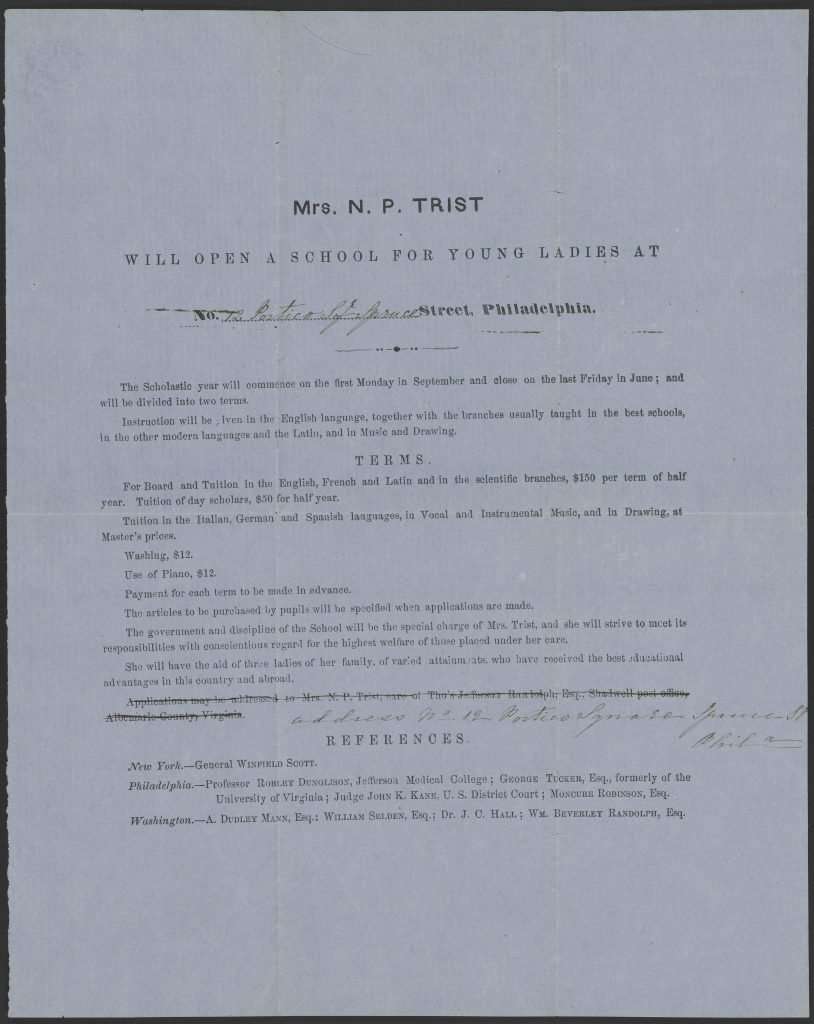 Trist’s career in government was effectively ended. He practiced law in New York while his wife operated a boarding school for girls in Philadelphia. In New York, Trist met Henry S. Randall and provided him with countless anecdotes, transcripts, and original manuscripts for his three-volume biography of Thomas Jefferson. Unable to make a success of his law career, Trist briefly considered going to California to prospect for gold or to Texas to farm. He unsuccessfully tried to reunite with his grandfather’s relations in England, contemplated investing in a coal mine in what is now West Virginia, and finally took a position as clerk and cashier for the Philadelphia, Wilmington, and Baltimore Railroad Company. Though a former slaveholder, Trist opposed the spread of slavery into the West. He voted for Abraham Lincoln in 1860 and was against secession for fear it would lead to a “war of the most terrifically bloody kind.”

Trist and his wife lived near their daughter and son-in-law in Alexandria after the Civil War. President Ulysses S. Grant appointed him postmaster of the city in 1870, and the following year Senator Charles Sumner succeeded in pushing a bill through Congress to compensate Trist for the salary he never received for his services and expenses as negotiator of the Treaty of Guadalupe Hidalgo. The whole amount was $14,559.90. Trist died at his Alexandria home on February 11, 1874, and was buried with other members of the Trist family in Ivy Hill Cemetery in Alexandria.