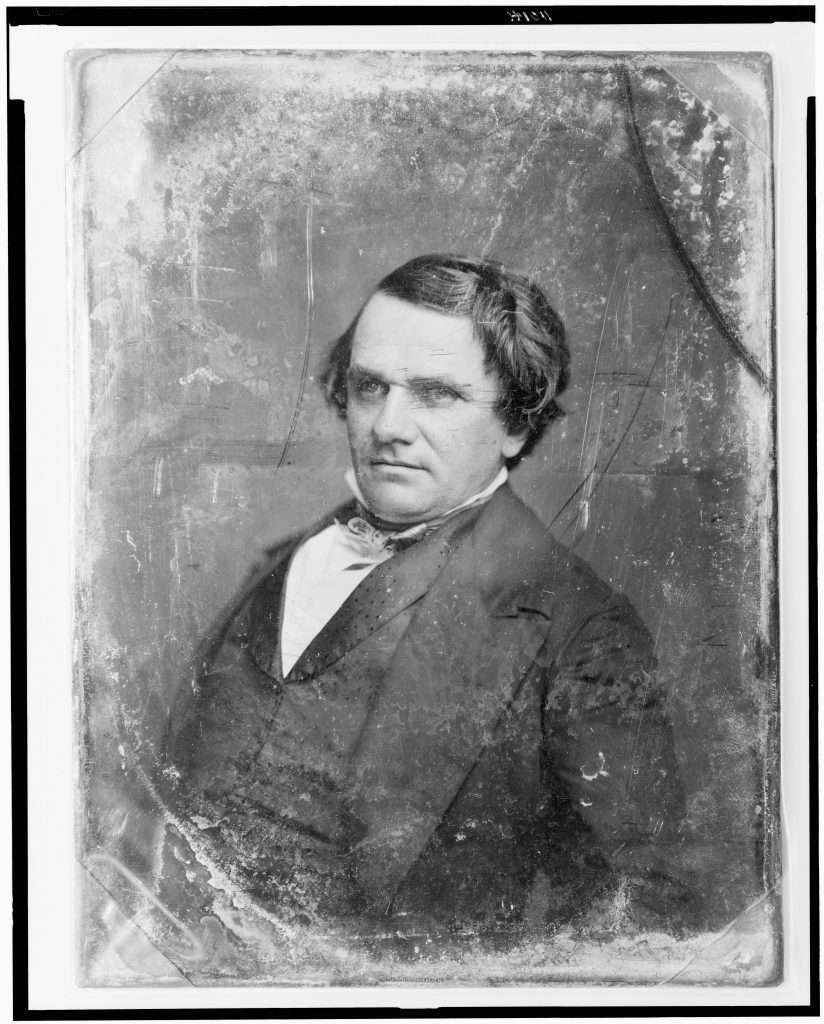 The Democratic Party began its convention in Charleston, South Carolina, on April 23, 1860. The incumbent president, James Buchanan, was a Democrat from Pennsylvania who had Southern sympathies but opposed secession. Due to a largely disastrous administration, he had no interest in reelection; still, the Democrats, and Stephen A. Douglas in particular, were favored to win the election. Douglas was a moderate who advocated “popular sovereignty,” or the right of territories and newly admitted states to decide for themselves the question of slavery. His challenge at the convention was to placate the so-called fire-eaters of the party’s Deep South wing—who pressed for a strong proslavery platform and threatened secession if they did not get it—while avoiding the appearance that these radicals held him hostage, which would have hurt his support among Northerners. Despite fractious debate, Douglas’s supporters had nearly passed their platform by the third day.

But events turned sharply. William Lowndes Yancey, a staunch secessionist from Alabama, addressed the convention and invoked the specter of John Brown in a passionate rejection of “Northern violence.” Yancey, along with Edmund Ruffin of Virginia and Robert Barnwell Rhett of South Carolina, forcefully argued that John Brown’s Raid in October 1859 had revealed the North’s true intention to dominate the South and forcibly emancipate enslaved African Americans. Southern radicals called for a federal slave code that would guarantee slaveholders’ rights, and for protections for slavery in western territories. The Douglas wing of the party realized that such provocative tactics would alienate moderate Northern voters and drive them to the Republicans. Douglas’s supporters rejected the proposal. Fifty Southern delegates left the convention in protest. 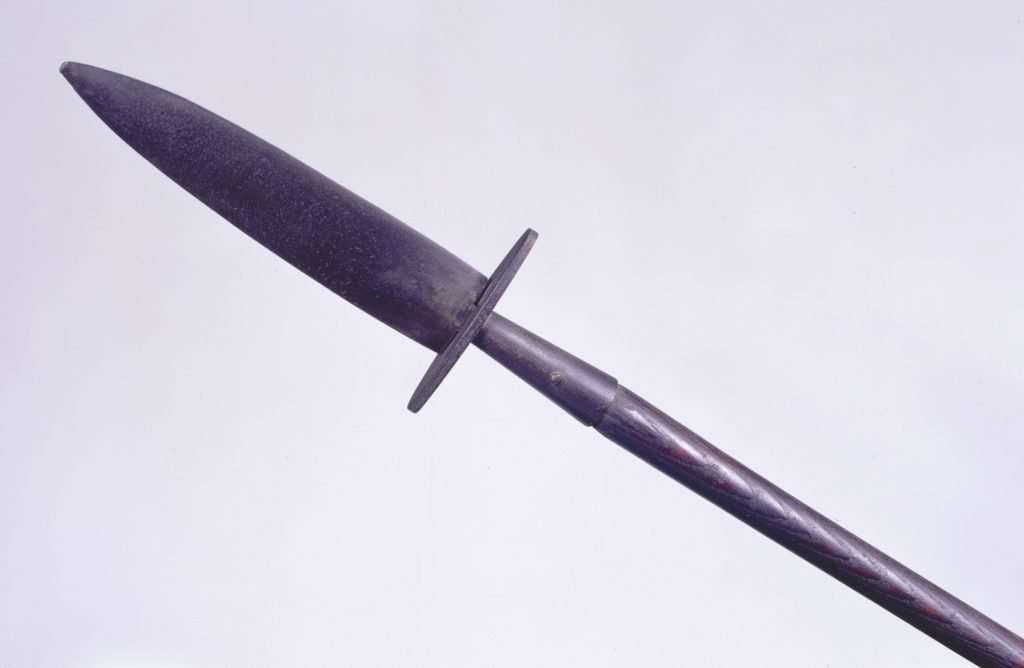 A Pike Made for John Brown

Virginia’s Democratic delegation, while sympathizing with the fire-eaters, still largely opposed the secessionists’ tactics. The exception was former governor Henry A. Wise, who vehemently pushed for a more radical stance while jockeying with his rival, state senator Robert M. T. Hunter, for a shot at the nomination. With Virginians edging toward more strident ground, members of the Deep South wing of the party undoubtedly felt more comfortable walking out of the convention, and indeed, most of the Virginia delegation followed them. The remaining Virginians hoped for compromise; however, the damage was done. After fifty-seven ballots, Douglas remained fifty votes short of the two-thirds majority needed for nomination, and on May 3 the convention adjourned.

“Perhaps even now, the pen of the historian is nibbed to write the story of a new revolution,” Yancey told a crowd of his supporters during a nighttime rally in Charleston’s courthouse square.

The Democrats reconvened in Baltimore, Maryland, on June 18, 1860, and again the fire-eaters—this time numbering 110 delegates—walked out, allowing the convention eventually to nominate Douglas. The radicals, bolstered by a cohort of Upper South delegates, formed their own convention, also in Baltimore. This so-called Seceder’s Convention nominated the U.S. vice president, John C. Breckinridge of Kentucky. The Virginia delegation, like the party itself, split between the Northern and Southern factions. 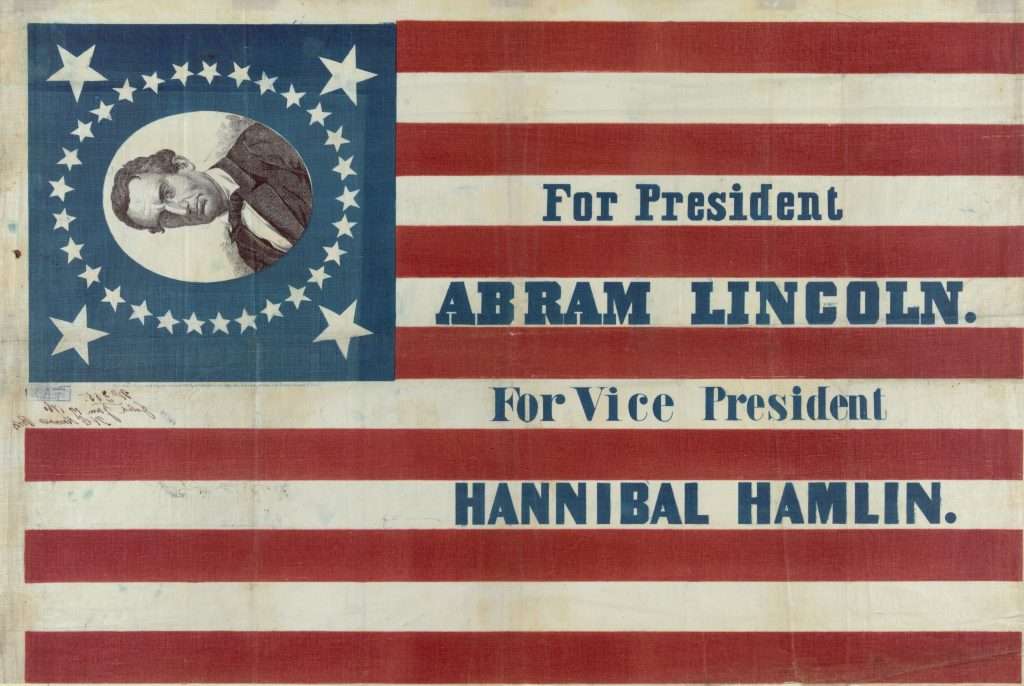 The Republican Party entered its Chicago, Illinois, convention as a decided underdog. Having fielded only one previous presidential candidate, John C. Frémont in 1856, the party sought to corral an unwieldy collection of former Whigs, Free Soilers—those who accepted slavery where it already existed while opposing its expansion—and outright abolitionists. Most Republicans were resigned to the reality of the South’s “peculiar institution”; nevertheless, they faced a barrage of accusations from Democrats that their antislavery views fomented violence. Douglas blamed Republicans for incidents like John Brown’s raid on Harpers Ferry. Fire-eaters like Ruffin called for retaliation against abolitionists before they attacked the South again, and the magazine editor James D. B. DeBow wrote that the North “has sanctioned and applauded theft, murder, treason, and at the hands of our Northern Brethren, has shed Southern Blood on Southern soil! There is—there can be no peace!” 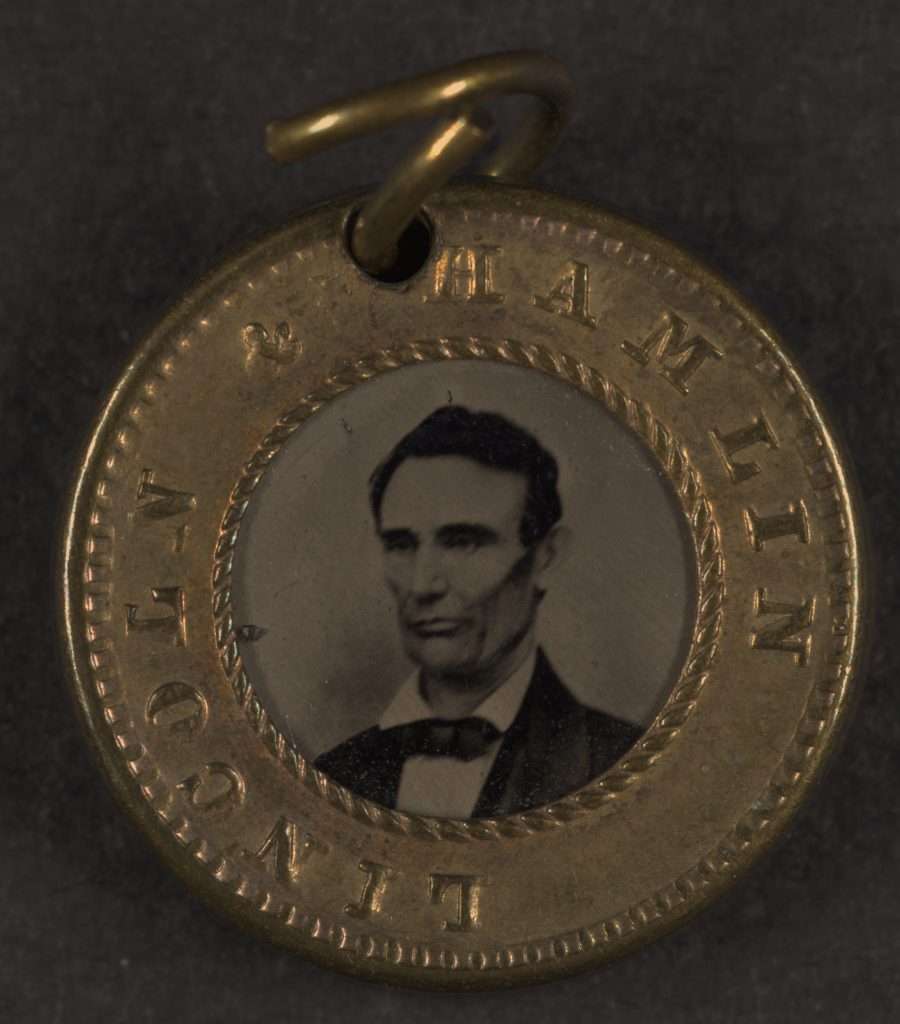 Under the circumstances, it hardly mattered that the Republicans and their early front-runner, U.S. senator William H. Seward of New York, had repudiated Brown and Harpers Ferry. In the lead-up to the convention, Seward found himself weakened by corruption scandals and a reputation for being too radical on the question of slavery. (The radicals, meanwhile, were unimpressed by his move to the center.) In an October 1858 speech in Rochester, New York, he had famously called this political battle “an irrepressible conflict between opposing and enduring forces, and it means that the United States must and will sooner or later become either entirely a slave-holding nation or entirely a free-labor nation.” Lower North moderates heard talk of war in those words and looked for an alternative. They found it in Abraham Lincoln of Illinois, an articulate moderate who might also bring the West with him in an election. On May 16, 1860, he was nominated on the third ballot.

In Virginia, Republicans enjoyed only miniscule support, largely in the western portion of the state; indeed, Virginia’s “Black Republicans” found themselves ostracized and relentlessly attacked. The lonely but outspoken cadre held its convention at Wheeling, Virginia (now West Virginia), in the far northwestern corner of the state, early in May. Delegates railed against the political domination by the “slave capitalists” of the Tidewater region. They also pointed to the disparity wrought by tax laws that favored wealthy, slave-owning planters over middling farmers, artisans, and urban laborers, but nonetheless stopped short of advocating abolition. The party’s devotion to unionism, however, was resolute. 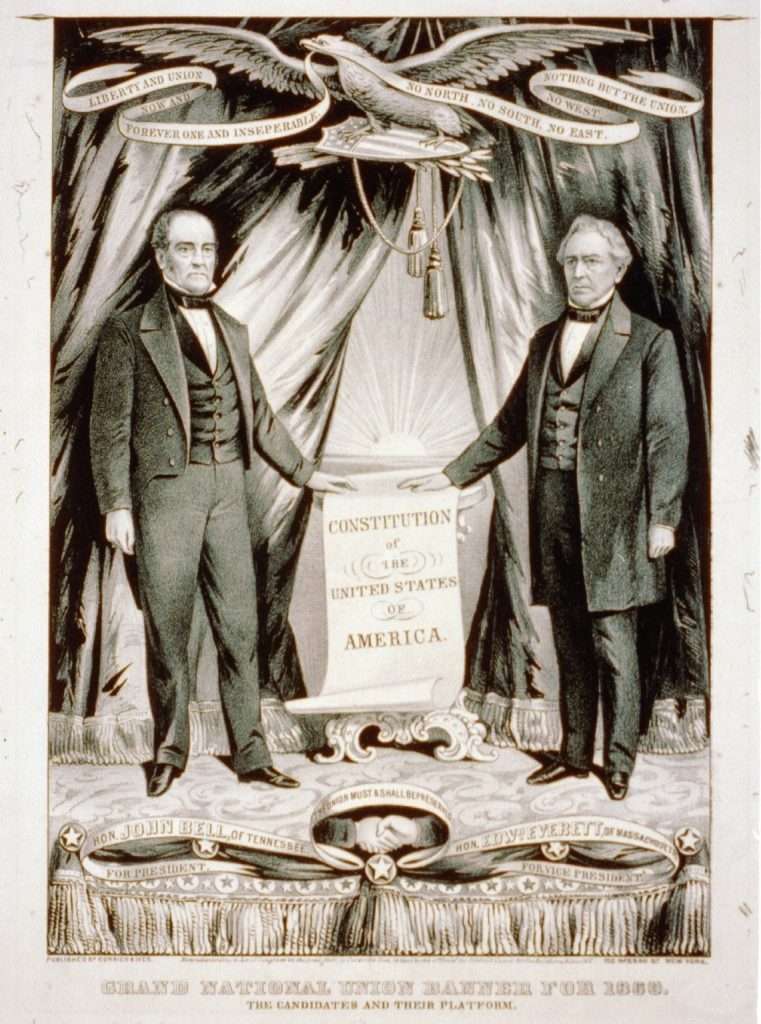 With the Democrats deeply divided, and the Republicans struggling to shore up their credentials as a responsible choice in difficult times, a third party joined the fray. The Constitutional Unionists’ primary concern, as their name suggests, was the preservation of the Union. This new, conservative party counted several prominent Virginians among its ranks, including Alexander H. H. Stuart, John Minor Botts, and William C. Rives. Constitutional Unionists convened at Baltimore, on May 9, 1860, and wrote a platform only two paragraphs long. Ignoring the slavery question altogether, it instead emphasized “the Constitution, the Union, and the Laws.” The convention nominated John Bell, the well-respected former U.S. senator from Tennessee who benefited from significant support in the Border States. Still, the Constitutional Unionists faced little chance of success. 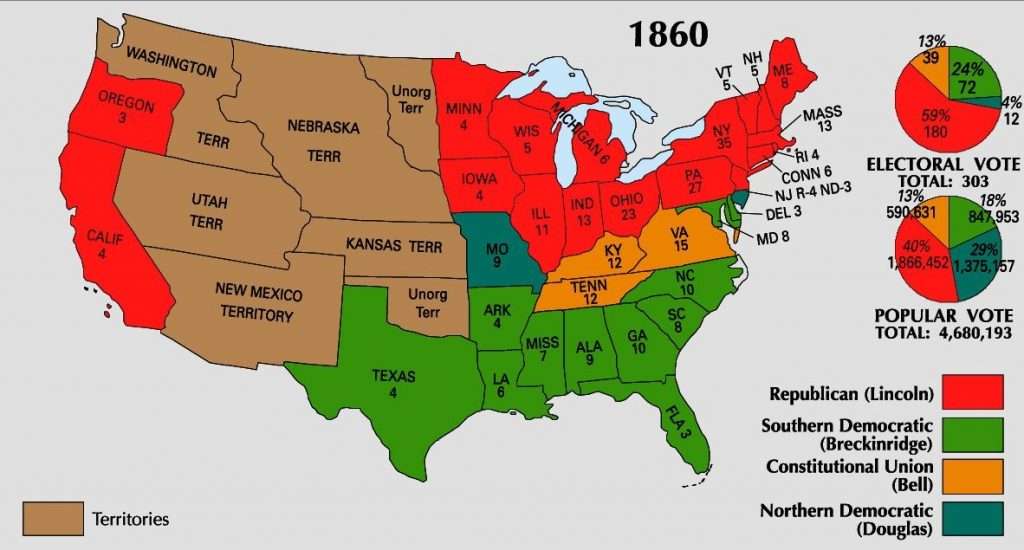 As the four candidates vied for votes, the campaign became a bitter one. Throughout the year, tensions rose as many observers increasingly recognized the potential for civil war should the Republicans prevail. Lincoln, for his part, attempted to assure voters that he had no intention of interfering with Southern slavery, even embracing colonization for freed blacks. The Republican platform explicitly rejected “any lawless invasion … of any state or territory.” Despite Lincoln’s arguments, however, the Democratic press successfully painted him as a wild-eyed fanatic bent on Southern domination, calling to mind the potent image of John Brown. The charges stuck; Lincoln did not carry a single Southern state. He was not even on the ballot in Alabama, Arkansas, Florida, Georgia, Louisiana, Mississippi, North Carolina, Tennessee, and Texas.

In Virginia, a majority of voters supported solidly Unionist candidates, despite the best efforts of Edmund Ruffin and Henry Wise. These two men lobbied hard for the stridently proslavery Breckinridge, and severely attacked each of the other candidates. Democratic governor John Letcher, meanwhile, remained a Douglas supporter. Letcher, who took office in January 1860, believed both that the senator was the legitimate Democratic candidate and that he held the party’s only chance for success. The secessionists realized that the Democrats’ split doomed them to failure. In fact, many in their ranks hoped that the subsequent Republican victory would force the slave states to move toward secession. Especially in the Border States of Maryland, Virginia, and Kentucky, where geography and large populations made them critical players in the politics of disunion, the 1860 election heightened tensions. As fears continued to rise that a Lincoln victory would indeed bring about a civil war, even Letcher followed the example of his predecessor, Henry Wise, in stockpiling weapons and matériel for the Virginia militia. 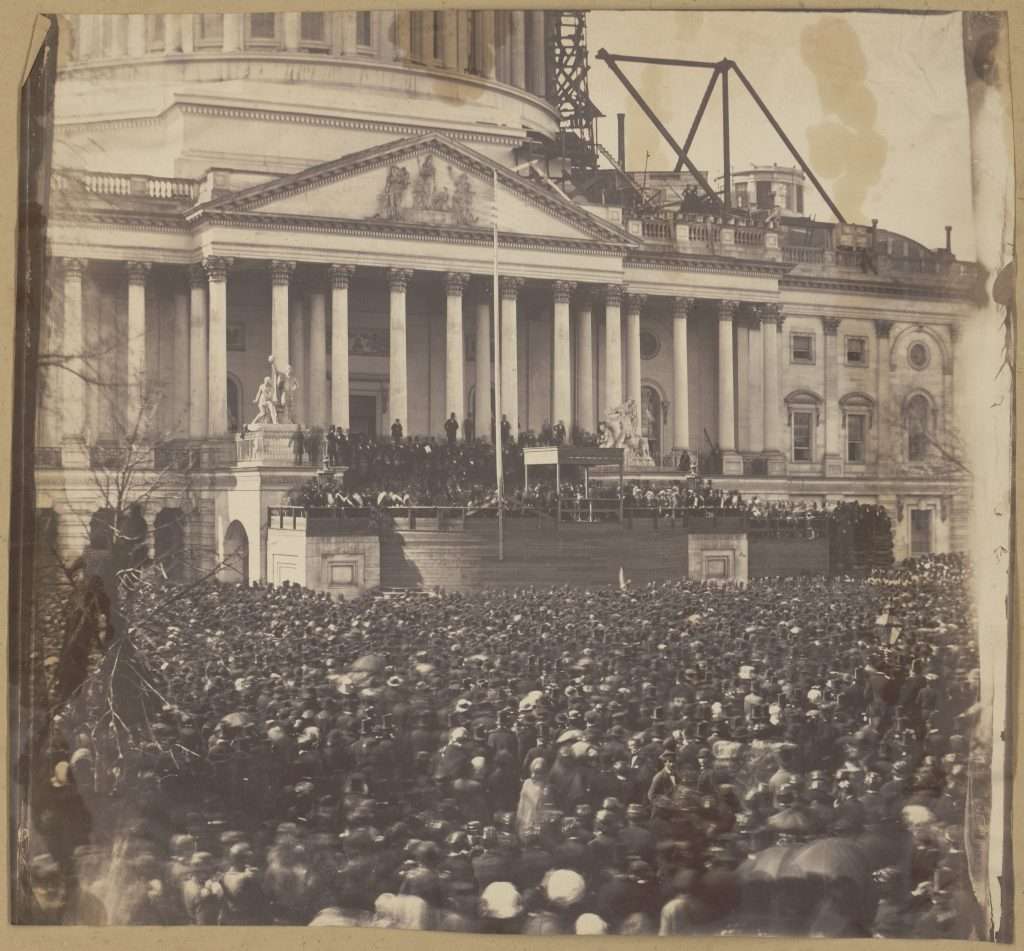 Against this tense backdrop, Virginians narrowly supported Constitutional Unionist John Bell with forty-four percent of the vote. Bell received 74,481 votes, in comparison to 74,325 for Breckinridge and 16,198 for Douglas. Lincoln won fewer than 2,000 votes. Lincoln’s national victory provoked the secession crisis, just as many radical Southerners had hoped, and moderate Virginians feared. Breckinridge’s close second proved to be a harbinger of future events. Virginia seceded a few days after Confederate forces fired on Fort Sumter in Charleston Harbor, South Carolina, and after Lincoln called for 75,000 volunteers.

RELATED CONTENT
Categories:
Related SOLs:
MAP
TIMELINE
October 16—18, 1859
John Brown and twenty-one raiders attack Harpers Ferry and capture the U.S. Arsenal there in an attempt to start a slave rebellion. Five men are killed (four white and one black). Ninety United States Marines, under the command of Colonel Robert E. Lee, capture Brown, who is
December 2, 1859
After a gripping trial held in Charles Town in which John Brown is found guilty of conspiracy, of inciting servile insurrection, and of treason against the state, he is hanged.
April 23, 1860
The Democratic Party's national convention meets in Charleston, South Carolina. When moderates supporting U.S. senator Stephen A. Douglas of Illinois clash with the party's radical Deep South wing, the latter group walks out.
May 3, 1860
At the Democratic Party's national convention in Charleston, South Carolina, moderate supporters of U.S. senator Stephen A. Douglas are unable to muster the necessary two-thirds majority for his nomination, even after fifty Deep South delegates walk out. The convention adjourns.
May 9, 1860
The Constitutional Union Party, composed largely of former Whigs and Unionist Democrats, convenes its national convention in Baltimore, Maryland. The new party nominates John Bell of Tennessee to run for U.S. president.
May 16, 1860
The Republican Party's national convention meets in Chicago, Illinois. Though U.S. senator William H. Seward of New York is the front-runner going into the convention, the delegates select the moderate Abraham Lincoln of Illinois.
June 18, 1860
After Deep South delegates walk out of the Democratic Party's national convention in Charleston, South Carolina, the party reconvenes in Baltimore, Maryland. The so-called fire-eaters walk out again, splitting the party in two.
November 6, 1860
Abraham Lincoln, a Republican from Illinois, is elected U.S. president. He wins 1 percent of the vote in Virginia. While John Bell of the Constitutional Union Party wins the state overall, the Southern Democrat John C. Breckinridge wins the trans-Allegheny counties of western Virginia.
FURTHER READING
CITE THIS ENTRY