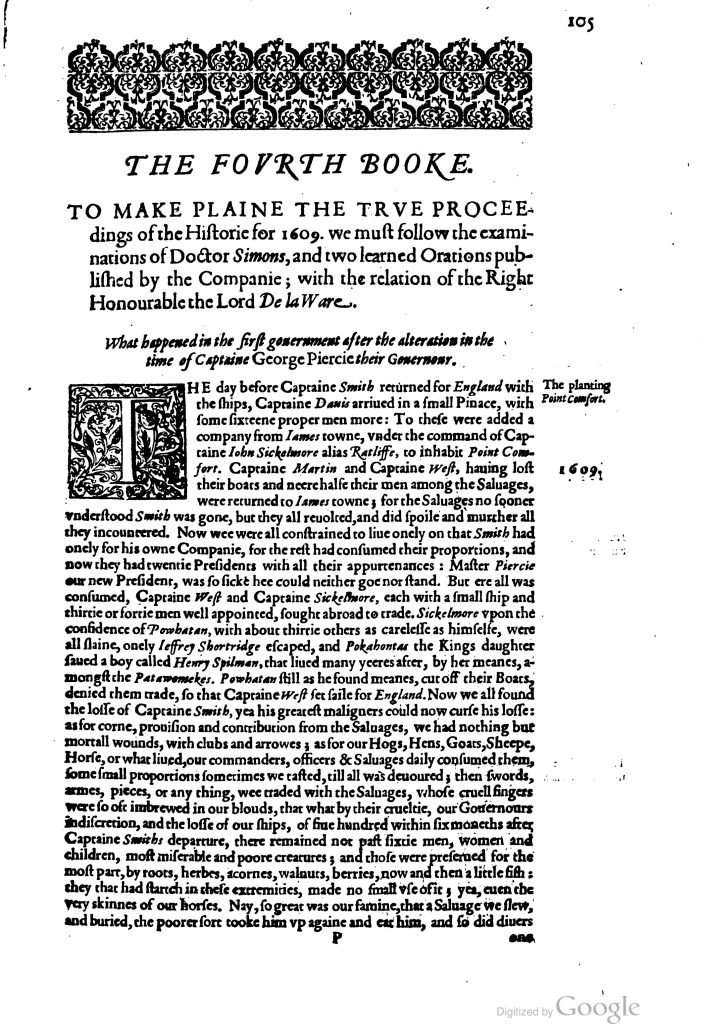 The Generall Historie of Virginia, New-England, and the Summer Isles (1632), Page 105

The day before Captaine Smith returned for England with the ships, Captaine Dauis arriued in a small Pinace, with some sixteene proper men more: To these were added a company from Iames towne, under the command of Captaine Iohn Sicklemore alias Ratliffe, to inhabit Point Comfort. Captaine Martin and Captaine West, hauing lost their boats and neere halfe their men among the Saluages, were returned to Iames towne; for the Saluages no sooner vnderstood Smith was gone, but they all reuolted, and did spoile and murther all they incountered. Now wee were all constrained to liue onely on that Smith had onely for his owne Companie, for the rest had consumed their proportions, and now they had twentie Presidents with all their appurtenances: Master Piercie our new President, was so sicke hee could neither goe nor stand. But ere all was consumed, Captaine West and Captaine Sickelmore, each with a small ship and thirtie or fortie men well appointed, sought abroad to trade. Sickelmore upon the confidence of Powhatan, with about thirtie others as carelesse as himselfe, were all slaine, onlely Ieffrey Shortridge escaped, and Pokahontas the Kings daughter saued a boy called Henry Spilman, that liued many yeeres after, by her meanes, amongst the Patawomekes. Powhatan still as he found meanes, cut off their Boats, denied them trade, so that Captaine West set saile for England. Now we all found the losse of Captaine Smith, yea his greatest maligners could now curse his losse: as for corne, prouision and contribution from the Saluages, we had nothing but mortall wounds, with clubs and arrowes; as for our Hogs, Hens, Goats, Sheepe, Horse, or what liued, our commanders, officers & Saluages daily consumed them, so small proportions sometimes we tasted, till all was deuoured; then swords, armes, pieces, or any thing, wee traded with the Saluages, whose cruell fingers were so oft imbrewed in our blouds, that what by their crueltie, our Gouernours indiscretion, and the losse of our ships, of fiue hundred within six moneths after Captaine Smiths departure, there remained not past sixtie men, women and children, most miserable and poore creatures; and those were preserued for the most part, by roots, herbes, acorns, walnuts, berries, now and then a little fish: they that had startch in these extremities, made no small vse of it; yea, euen the very skinnes of our horses. Nay, so great was our famine, that a Saluage we slew, and buried, the poorer sort tooke him vp againe and eat him, and so did diuers 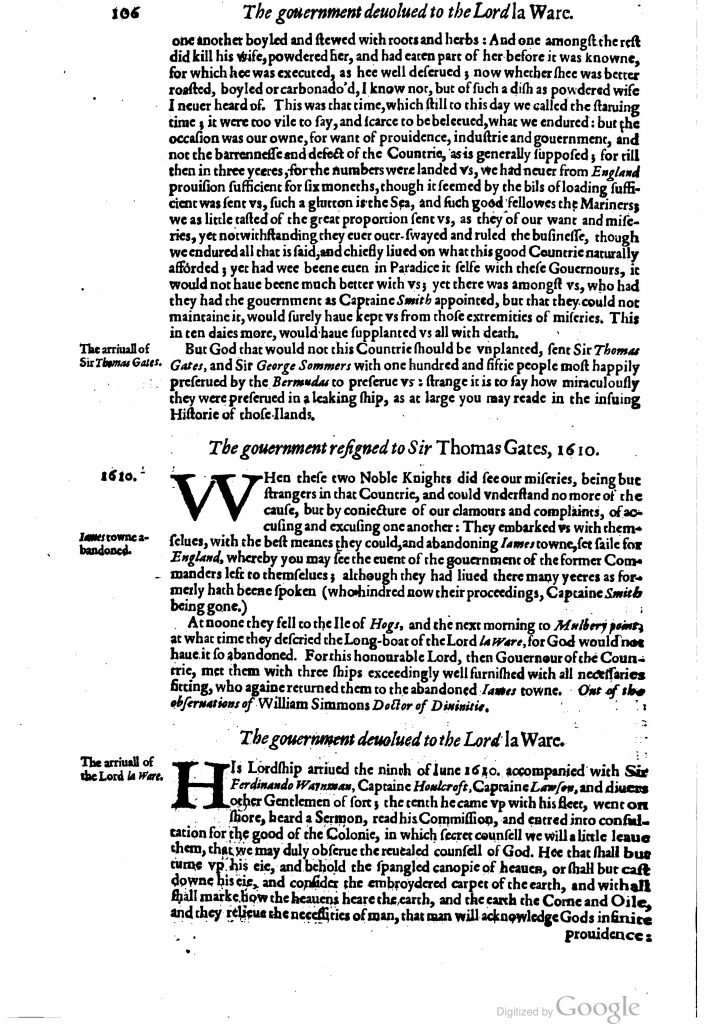 The Generall Historie of Virginia, New-England, and the Summer Isles (1632), Page 106

one another boyled and stewed with roots and herbs: And one amongst the rest did kill his wife, powdered her, and had eaten part of her before it was knowne, for which hee was executed, as hee well deserued; now whether shee was better roasted, boyled or carbonado'd, I know not, but of such a dish as powdered wife I neuer heard of. This was that time, which still to this day we called the staruing time; it was too vile to say, and scarce to be beleeued, what we endured: but the occasion was our owne, for want of prouidence, industrie and gouernment, and not the barrennesse and defect of the Countrie, as is generally supposed; for till then in three yeeres, for the numbers were landed vs, we had neuer from England prouision sufficient for six moneths, though it seemed by the bils of loading sufficient was sent vs, such a glutton is the Sea, and such good fellowes the Mariners; we as little tasted of the great proportion sent vs, as they of our want and miseries, yet notwithstanding they euer ouer-swayed and ruled the businesse, though we endured all that is said, and chiefly liued on what this good Countrie naturally afforded; yet had wee beene euen in Paradice it selfe with these Gouernours, it would not haue beene much better with vs; yet there was amongst vs, who had they had the gouernment as Captaine Smith appointed, but that they could not maintaine it, would surely haue kept vs from those extremities of miseries. This in ten daies more, would haue supplanted vs all with death.

But God that would not this Countrie should be vnplanted, sent Sir Thomas Gates, and Sir George Sommers with one hundred and fiftie people most happily preserued by the Bermudas to preserue vs: strange it is to say how miraculously they were preserued in a leaking ship, as at large you may reade in the insuing Historie of those Ilands.

RELATED CONTENT
Categories:
Type:
MAP
TIMELINE
1624
John Smith's The Generall Historie of Virginia, New-England, and the Summer Isles, which emphasizes treacherous natives, a heroic Smith, and the one "good" Indian, "Princess Pocahontas," is published. Historians have since questioned its reliability. It includes Smith's map Virginia: Discovered and Discribed.
FURTHER READING