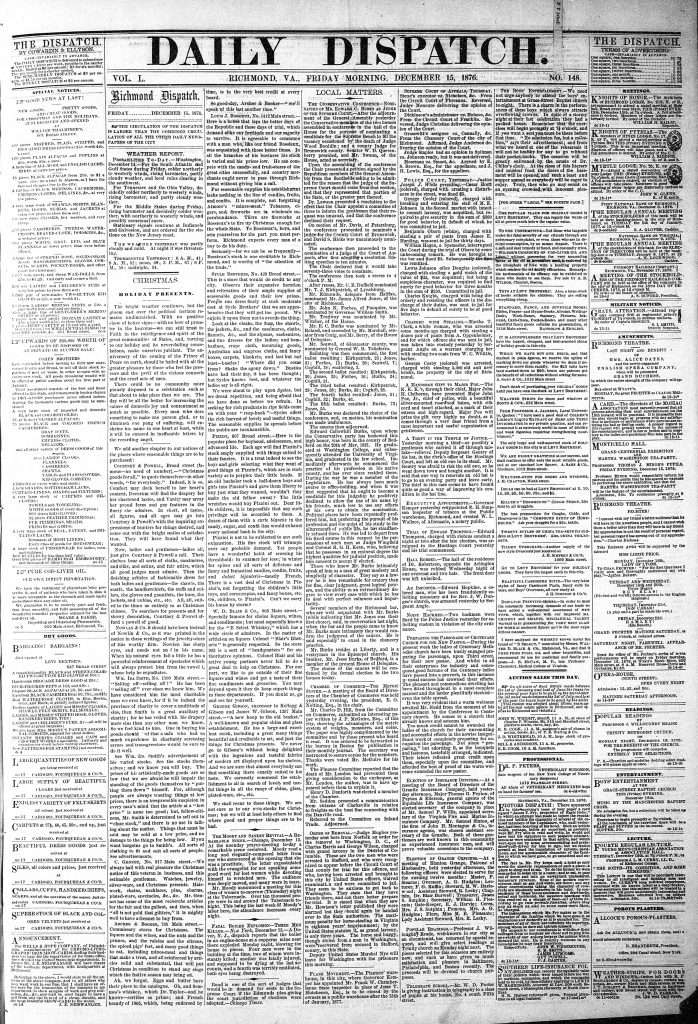 Editors Dispatch: There appeared in this morning’s issue of your paper a card signed “James T. Fry, proprietor of Eagle Hotel,” in which an attempt was made to injure the reputation and belittle the character of several of the colored members of the Legislature, who, until yesterday, had been boarding at his hotel. Such an article would, perhaps, better go unnoticed, as probably, were Mr. Fry able to read and write, he would not have lent his signature to such palpable misstatements as were contained in that article, and which were spun out by some accommodating and prejudiced quill-driver for him to sign; but we cannot permit at least the imputation of extreme parsimony, and the questionable character of the families to which we have gone, to go unnoticed and undenied.

The fact is, Mr. Fry keeps such a hotel as only meets the absolute requirements of such a place—a place to sleep and to eat. To do the former we were compelled to lodge six in a room; and to eat, to pass out of doors and into an unwarmed, unplastered, temporary structure. None of the modern conveniences, such as gas and water, are there; and any other conveniences taking the character of comforts are absolutely unknown in his hotel. In consequence of these inconveniences and drawbacks, actual and incidental, the members boarding with him resolved on a change of base—all of them deciding to go into private families, where they pay as much as, and in some cases more than, he charged.

The insinuations which Mr. Fry makes as to the character of the families where we have gone is as ungracious and dastardly as it is uncalled for. The members of all of them are infinitely his superiors, among whom he dare not intrude himself.

His appeals to our constituents to withdraw their suffrages from us because we chose not to pay him one-sixth of our salary betrays the animus which dictated the card. He is entirely welcome to any consolation he may draw therefrom.