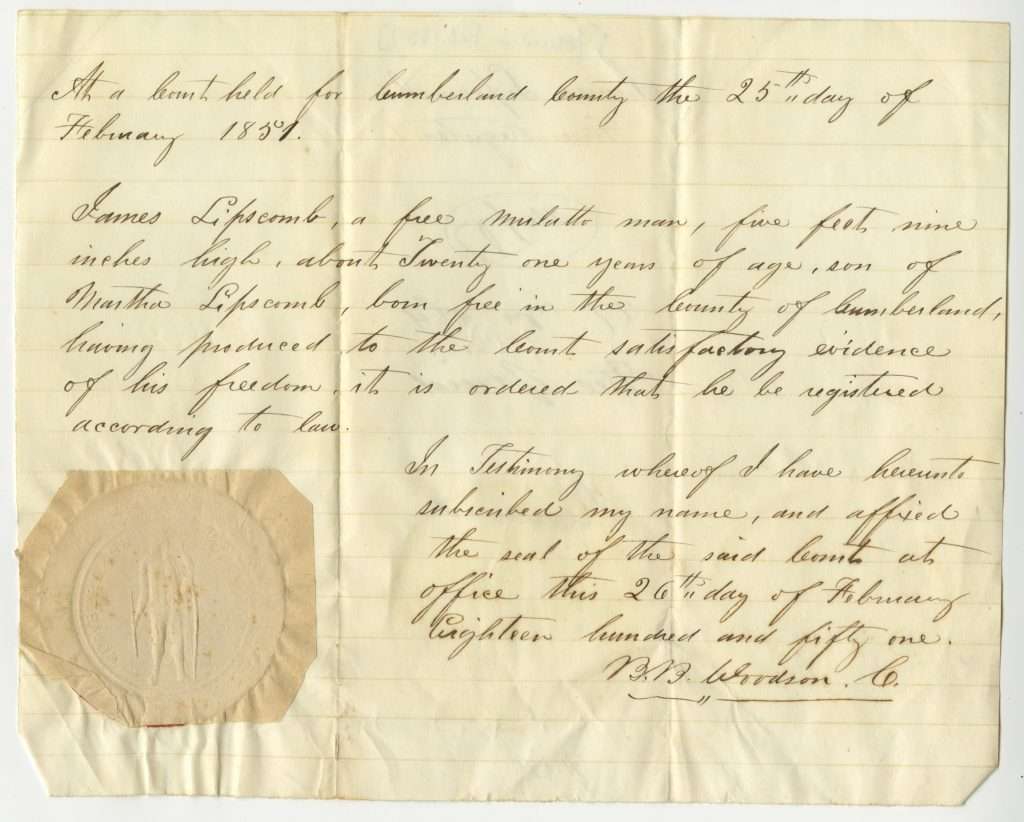 Lipscomb was born free on December 4, 1830, in Cumberland County and was the son of Martha Lipscomb, a free seamstress who owned her own land; the name of his father is not recorded. A dozen or more households of free African Americans named Lipscomb lived in Cumberland and Powhatan counties, and both males and females in each county owned land. He was probably closely related to John Robinson, known early in life as John Lipscomb, who represented Cumberland County in the Convention of 1867–1868 and served four years in the Senate of Virginia.

In 1850 Lipscomb and three other free African American laborers, one of them his younger brother, William, resided in Cumberland County with white farmers Hezekiah Ford and Elizabeth Ford. Late in the decade Lipscomb left the county and by the summer of 1860 was living in Richmond with the household of Robert Edmond, a prosperous white merchant for whom he was the carriage driver. His wife, Judith Lipscomb, resided with him there; her maiden name and the date of their marriage are not known.

It is likely that Lipscomb remained in Richmond during the Civil War, but he moved back to Cumberland County soon afterward. In May 1870 he bought forty-five acres of land in the county for $400, and he purchased two other tracts in September 1871 and April 1873. Together with four additional purchases during the next two decades, he acquired more than 500 acres. In 1892, he paid taxes on about 390 acres of land worth more than $2,500. He was probably one of the most prosperous African Americans in the county. In 1870 the census enumerator listed two teenage boys and two teenage girls living with him and his wife, but it is not certain whether all the children were theirs or whether they had children born earlier or later than any of those four.

On July 6, 1869, in the second election in which African Americans voted in Virginia, Lipscomb won election to a two-year term in the House of Delegates representing Cumberland County. Voters that same day ratified a new state constitution, and the votes tallied by race in the referendum closely matched his margin of victory over a white candidate of the Conservative Party, 1,133 to 615. These numbers indicate that all or nearly all of the black voters in the county but few or none of the white men voted for Lipscomb. Lipscomb easily won reelection in 1871, 1873, and 1875, served for eight consecutive years, and was a member of the relatively inconsequential Committee on Executive Expenditures. Newspaper reports of election returns from the county uniformly identified him as a radical, indicating his affiliation early in his career with the radical wing of the state’s Republican Party.

During Lipscomb’s first term, the assembly created the first statewide system of public schools. He voted to ratify the Fourteenth and Fifteenth amendments to the U.S. Constitution, which Congress required before it would admit senators and representatives from former Confederate states; ratification ended Congressional Reconstruction in the state. Lipscomb voted in March 1871 for the Funding Act, which the assembly passed to pay the antebellum public debt. The law that led to more than a decade of political turmoil.

Lipscomb regularly attended local, district, and state conventions of the Republican Party, but in 1872 the county’s Republican Party convention objected to his pending appointment as an assistant assessor of federal taxes in the county. The convention declared that the incumbent assessor had done a good job and should not be replaced. In August 1875, Lipscomb was among the approximately 100 delegates who attended a convention in Richmond that had been called by African American legislators. Delegates discussed the numerous problems faced by African Americans across the state, including the lack of jobs and poor schools. The convention organized a short-lived Laboring Men’s Mechanics’ Union Association to promote their economic and political interests.

In 1877, when Lipscomb ran for a fifth term in the House of Delegates, he lost to a white candidate by a narrow margin, concluding his career in electoral politics. Three years later Lipscomb was recorded in the census as farmer who was then living with a daughter, his wife having evidently died on an unrecorded date after 1870. In addition to his farm, Lipscomb operated a general store out of his residence, which was one of the largest of any African American in that part of the county. He operated the store until his death, at which time his descendants took it over and ran it for several generations. Early in the twentieth century they moved it into a nearby building, and it remained a center of community life until it closed in 1971. The state government recognized the importance of Lipscomb and his store in 1994 when it erected a historic marker at the site of the general store. Lipscomb died, probably at his residence in Cumberland County, on August 10, 1893, and was likely buried on his property there.