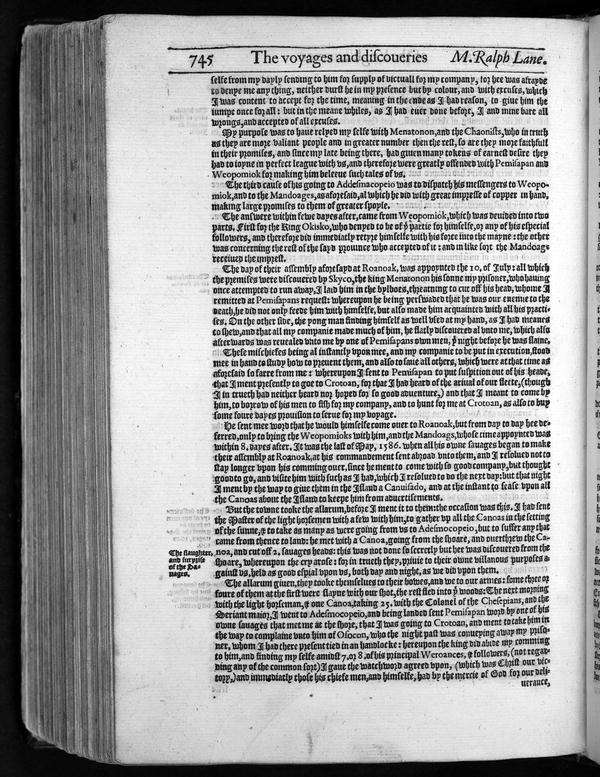 But the towne tooke the allarum, before I ment it to them: the occasion was this. I had sent the Master of the light horsemen with a few with him, to gather up all the Canoas in the setting of the sunne, & to take as many as were going from us to Adesmocopeio, but to suffer any that came from thence to land: he met with a Canoa, going from the shoare, and overthrew the Canoa, and cut off 2. savages heads: this was not done so secretly but hee was discovered from the shoare, whereupon the cry arose: for in trueth they, privie to their owne villanous purposes against us, held as good espial upon us, both day and night, as we did upon them.

The allarum given, they tooke themselves to their bowes, and we to our armes: some three or foure of them at the first were slayne with our shot, the rest fled into the woods: The next morning with the light horseman, & one Canoa, taking 25. with the Colonel of the Chesepians, and the Serjeant major, I went to Adesmocopeio, and being landed sent Pemisapan word by one of his owne savages that met me at the shore, that I was going to Croatoan, and ment to take him in the way to complaine unto him of Osocon, who the night past was conveying away my prisoner, whom I had there present tied in an handlocke: hereupon the king did abide my comming to him, and finding my selfe amidst 7. or 8. of his principal Weroances, & followers, (not regarding any of the common sort) I gave the watchword agreed upon, (which was Christ our victory,) and immediately those his chiefe men, and himselfe, had by the mercie of God for our deli- 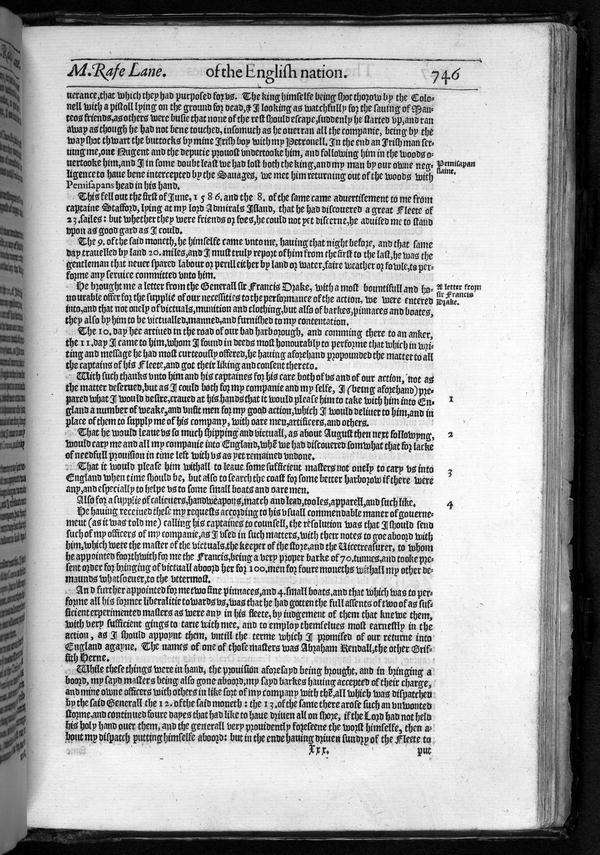 verance, that which they had purposed for us. The king himselfe being shot thorow by the Colonell with a pistoll lying on the ground for dead, & I looking as watchfully for the saving of Manteos friends, as others were busie that none of the rest should escape, suddenly he started up, and ran away as though he had not bene touched, insomuch as he overran all the companie, being by the way shot thwart the buttocks by mine Irish boy with my Petronell. In the end an Irish man serving me, one Nugent and the deputie provost undertook him, and following him in the woods overtook him, and I in some doubt least we had lost both the king, and my man by our owne negligence to have bene intercepted by the Savages, we met him returning out of the woods with Pemisapans head in his hand.

Meeting Granganimeo; an excerpt from “The first voyage made to the coasts of America” by Arthur Barlowe (1589) Thomas Harriot on the Indians of Ossomocomuck; an excerpt from A briefe and true report of the new found land of Virginia (1588)