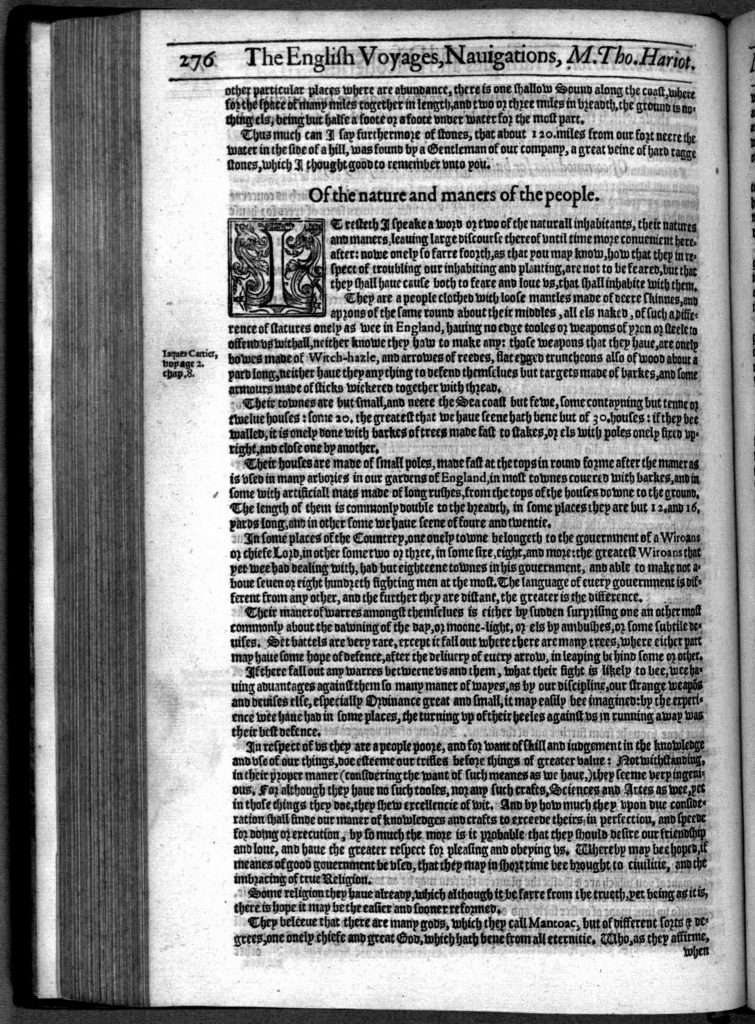 The Indians of Ossomocomuck; an excerpt from A briefe and true report of the new found land of Virginia by Thomas Hariot (1588), Page 276

They are a people clothed with loose mantles made of deere skinnes, and aprons of the same round about their middles, all els naked, of such a difference of statures onely as wee in England, having no edge tooles or weapons of yron or steele to offend us withall, neither knowe they how to make any: those weapons that they have, are onely bowes made of Witch-hazle, and arrowes of reedes, flat edged truncheons also of wood about a yard long, neither have they any thing to defend themselves but targets made of barkes, and some armours made of sticks wickered together with thread.

Their townes are but small, and neere the Sea coast but fewe, some contayning but tenne or twelve houses: some 20. the greatest that we have seene hath bene but of 30. houses: if they bee walled, it is onely done with barkes of trees made fast to stakes, or els with poles onely fixed upright, and close one by another.

Their houses are made of small poles, made fast at the tops in round forme after the maner as is used in many arbories in our gardens of England, in most townes covered with barkes, and in some with artificiall mats made of long rushes, from the tops of the houses downe to the ground. The length of them is commonly double to the breadth, in some places they are but 12. and 16. yards long, and in other some we have seene of foure and twentie.

In some places of the Countrey one onely towne belongeth to the government of a Wiroans or chiefe Lord, in other some two or three, in some sixe, eight, and more: the greatest Wiroans that yet wee had dealing with, had but eighteene townes in his government, and able to make not above seven or eight hundreth fighting men at the most. The language of every government is different from any other, and the further they are distant, the greater is the difference.

Their maner of warres amongst themselves is either by sudden surprising one an other most commonly about the dawning of the day, or moone-light, or els by ambushes, or some subtile devises. Set battels are very rare, except it fall out where there are many trees, where either part may have some hope of defence, after the delivery of every arrow, in leaping behind some or other.

If there fall out any warres betweene us and them, what their fight is likely to bee, wee having advantages against them so many maner of wayes, as by our discipline, our strange weapons and devises else, especially Ordinance great and small, it may easily bee imagined: by the experience we have had in some places, the turning up of their heeles against us in running away was their best defence.

In respect of us they are a people poore, and for want of skill and judgement in the knowledge and use of our things, doe esteeme our trifles before things of greater value: Notwithstanding, in their proper maner (considering the want of such meanes as we have,) they seeme very ingenious. For although they have no such tooles, nor any such crafts, Sciences and Artes as wee, yet in those things they doe, they shew excellencie of wit. And by how much they upon due consideration shall finde our maner of knowledges and crafts to exceede theirs in perfection, and speede for doing or execution, by so much the more is it probable that they should desire our friendship and love, and have the greater respect for pleasing and obeying us. Whereby may bee hoped, if meanes of good government be used, that they may in short time bee brought to civilitie, and the imbracing of true Religion.

The Killing of Pemisapan; an excerpt from “An account of the particularities of the imployments of the English men left in Virginia” by Ralph Lane (1589) Diseases that Ravaged Indian Towns; an excerpt from A briefe and true report of the new found land of Virginia by Thomas Hariot (1588) (1588)