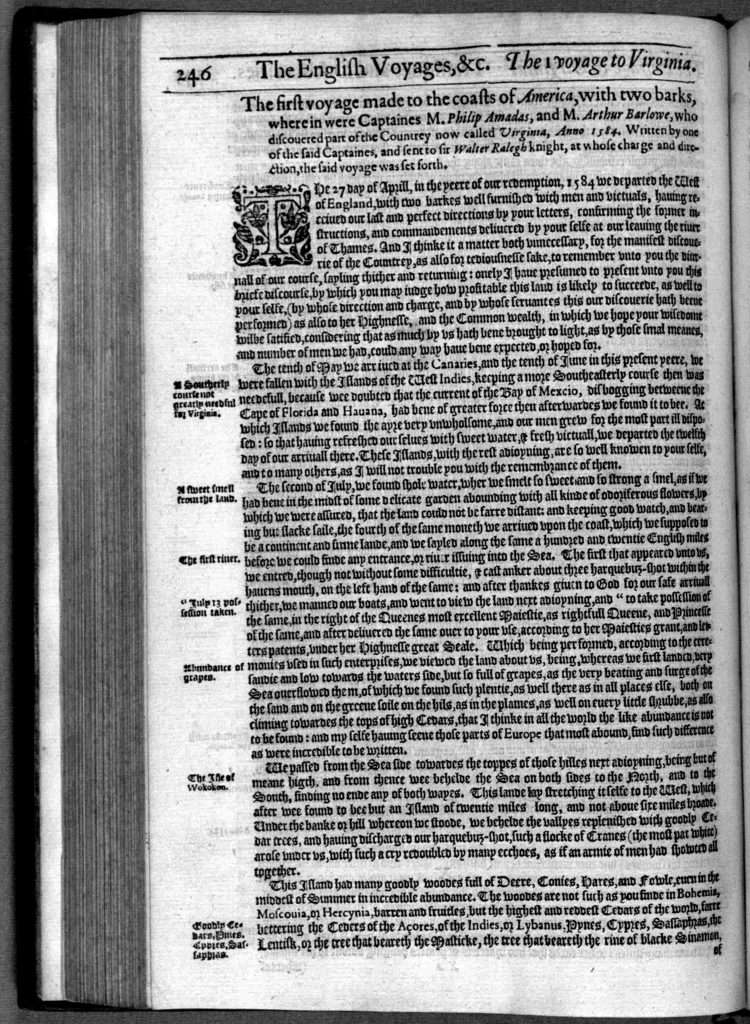 Meeting Granganimeo; an excerpt from “The first voyage made to the coasts of America” by Arthur Barlowe (1589), Page 246

This Island had many goodly woodes, full of Deere, Conies, Hares, and Fowle, even in the middest of Summer, in incredible abundance. The woodes are not such as you finde on Bohemia, Moscovia, or Hercynia, barren and fruitles, but the highest and reddest Ceders of the world, farre bettering the Cedars of the Açores, of the Indies, or of Lybanus, Pynes, Cypres, Sassaphras, the Lentisk, or the tree that beareth the Masticke, the tree that beareth the rine of blacke Sinamon, 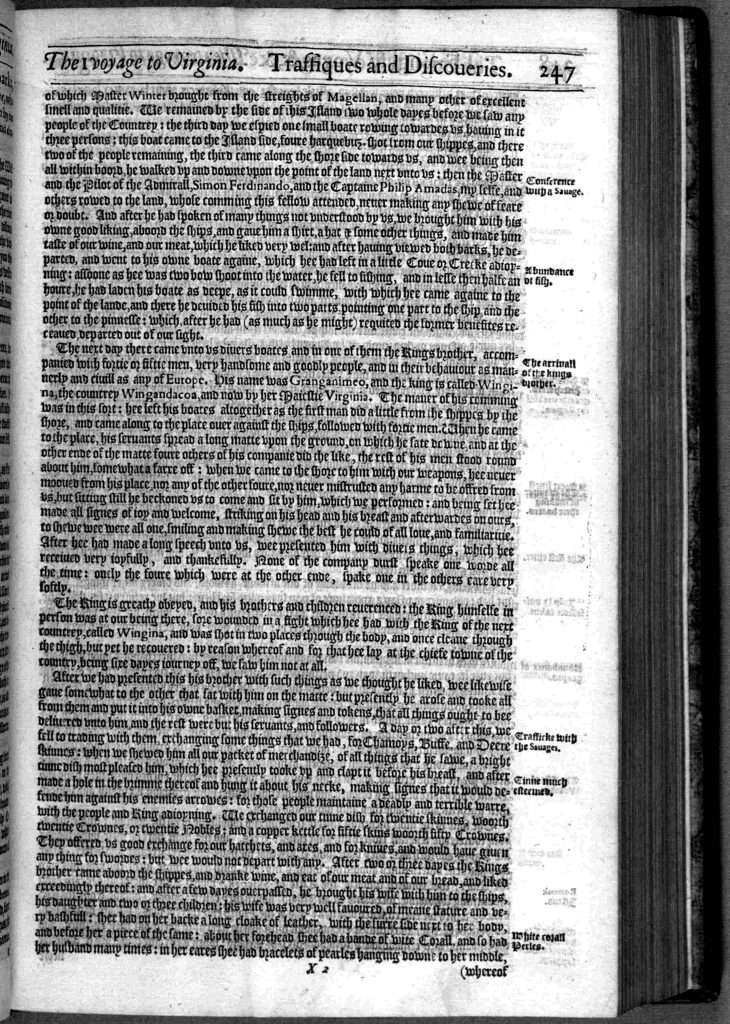 Meeting Granganimeo; an excerpt from “The first voyage made to the coasts of America” by Arthur Barlowe (1589), Page 247

of which Master Winter brought from the streights of Magellan, and many other of excellent smell and qualitie. We remained by the side of this Island two whole dayes before we saw any people of the Countrey: the third day we espied one small boate rowing towardes us having in it three persons: this boat came to the Island side, foure harquebus-shot from our shippes, and there two of the people remaining, the thirde came along the shore side towards us, and wee being then all within boord, he walked up and downe upon the point of the land next unto us: then the Master and the Pilot of the Admirall, Simon Ferdinando, and the Captaine Philip Amadas, my selfe, and others rowed to the land, whose comming this fellow attended, never making any shewe of feare or doubt. And after he had spoken of many things not understood by us, we brought him with his owne good liking, aboord the ships, and gave him a shirt, a hat & some other things, and made him taste of our wine, and our meat, which he liked very wel: and after having viewed both barks, he departed, and went to his owne boate againe, which hee had left in a little Cove or Creeke adjoyning: assoone as hee was two bow shoot into the water, hee fell to fishing, and in lesse then halfe an houre, he has laden his boate as deepe, as it could swimme, with which hee came againe to the point of the lande, and there he devided his fishe into two parts, pointing one part to the ship, and the other to the pinnesse: which, after he had (as much as he might) requited the former benefites receaved, departed out of our sight.

The next day there came unto us divers boates, and in one of them the Kings brother, accompanied with fortie or fiftie men, very handsome and goodly people, and in their behaviour as mannerly and civill as any of Europe. His name was Granganimeo, and the king is called Wingina, the countrey Wingandacoa, and now by her Majestie Virginia. The maner of his comming was in this sort: hee left his boates altogether as the first man did a little from the shippes by the shore, and came along to the place over against the ships, followed with fortie men. When hee came to the place, his servants spread a long matte uppon the ground, on which he sate downe, and at the other ende of the matte foure others of the companie did the like, the rest of his men stood round about him, somewhat a farre off: when we came to the shore to him with our weapons, hee never mooved from his place, nor any of the other foure, nor never mistrusted any harme to be offered from us, but sitting still he beckoned us to come and sit by him, which we perfourmed: and being set hee makes all signes of joy and welcome, striking on his head and his breast and afterwardes on ours, to shewe wee were all one, smiling and making shewe the best he could of all love, and familiaritie. After hee had made a long speech unto us, wee presented him with divers things, which hee received very joyfully, and thankefully. None of the company durst to speake one worde all the time: onely the foure which were at the other ende, spake one in the others eare very softly.

RELATED CONTENT
Categories:
Type:
MAP
TIMELINE
1589
Arthur Barlowe's report of an English reconnaissance voyage to America is published in Richard Hakluyt's Principall Navigations with the title "The first voyage made to the coasts of America, with two barks, where in were Captaines M. Philip Amadas, and M. Arthur Barlowe, who discovered part of the Countrey now called Virginia, Anno 1584."
CITE THIS ENTRY