Omohundro was born on December 11, 1807, in Albemarle County, to Richard Omohundro, a farmer, and Edith Seay Omohundro. He was the third of nine children and grew up at Gale Hill, the home built by his father in Fluvanna County. Little is known of Omohundro’s early life or education. By his mid-twenties, he worked as an agent for the Alexandria-based slave-trading firm Franklin & Armfield, buying and selling enslaved people at a commission of $10 per purchase. By 1846 Omohundro had moved to Richmond, and in August of that year he applied for a license to operate a “private house of entertainment.” His property, at the corner of Seventeenth and Grace streets in the city’s slave-trading district, included a slave jail, boardinghouse, and private residence. 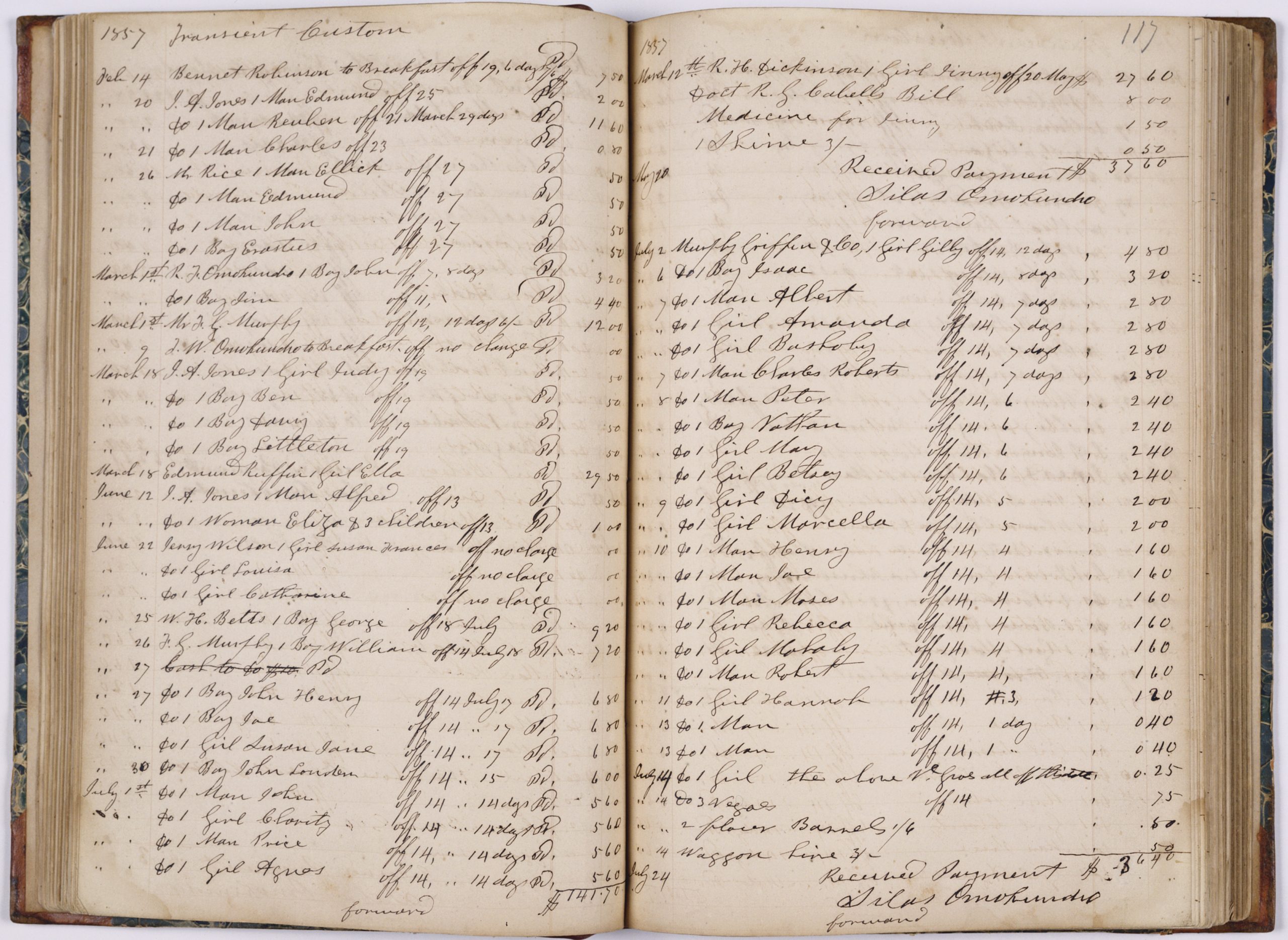 The jail confined enslaved men, women, and children, most of whom were awaiting sale, although on occasion, it also housed enslaved people as a form of punishment. From 1851 to 1861, Omohundro recorded in his account book the incarceration of at least 1,900 people at a profit of $6,250.57. Jail fees were typically 30 to 40 cents per individual per night. During those same years, the boardinghouse, which served slaveholders in town for auctions, garnered $1,934.40, with Omohundro increasing his profits by selling necessities such as utensils, buckets, and cups to men leaving for slave markets in the Deep South. Omohundro also bought and sold individuals himself, working with his brother, Richard F. Omohundro, and in partnership with other prominent Richmond traders, including Henry N. Templeman and Hector Davis. 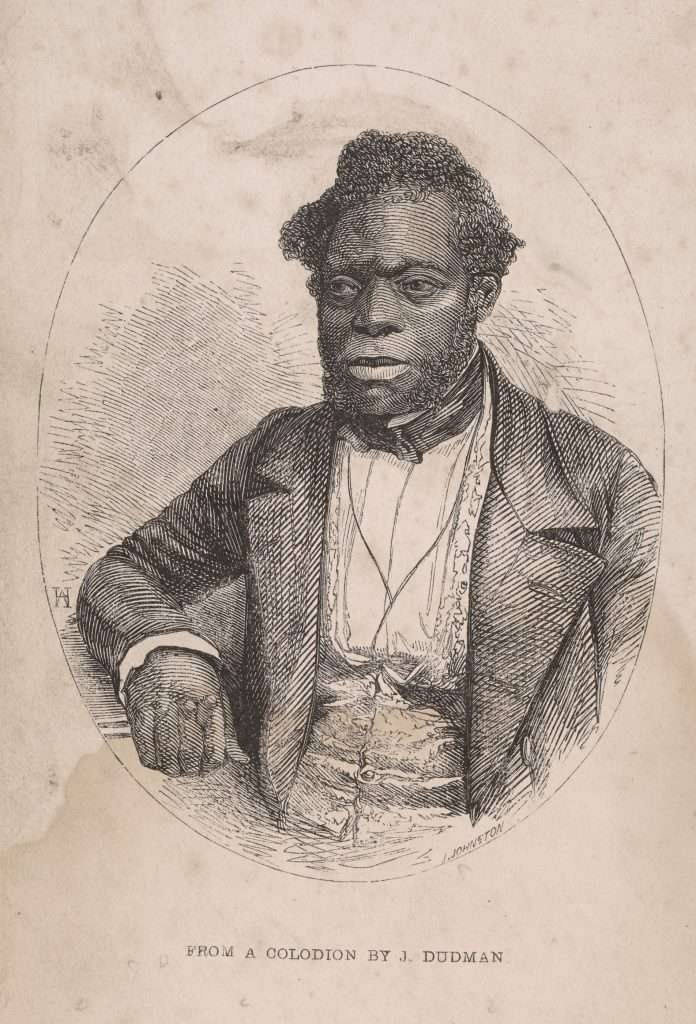 In his account books Omohundro labeled several women as “fancy,” indicating that they were to be sold for sexual purposes. Such women tended to be young and light-complexioned, and they demanded high prices. In April 1859, for instance, Omohundro sold an enslaved woman, named Willy Ann and marked “Fancy,” to G. W. Apperson for $1,400. John Brown, who escaped slavery in Georgia, noted in his 1855 autobiography that “the slave-pen is only another name for a brothel.”

Like many if not most antebellum slave traders, Omohundro chose personal concubines from among the enslaved women he owned, and this may have been how he came into contact with the mothers of his children. Omohundro never legally married, but he had children with at least three different women, two of whom were enslaved. His first child, Julia A. Omohundro, was born in 1834 to an unknown mother.

At some point in the 1830s, Omohundro purchased two young enslaved women named Martha Tandy and Louisa Tandy and had children with one or both of them. The first child, Littleton J. Omohundro, was born in 1838, when Louisa Tandy was sixteen or seventeen years old. A few years later, Omohundro moved Louisa Tandy and Littleton Omohundro to Cincinnati, Ohio, where he visited them annually. Tandy gave birth to four more children between 1841 and 1852 of 1853, including three daughters and a son.

Before the birth of Tandy’s last child with Omohundro, he also had a child with Corinna Hinton, a thirteen-year-old enslaved woman. Silas Omohundro Jr. was born on June 15, 1849, after which Hinton gave birth to six more children by her master, one daughter and five sons. Five of them lived to adulthood. Omohundro sent his eldest two children with Hinton first to Lancaster, Pennsylvania, and then to Philadelphia, where he paid for their educations. On at least two occasions, Omohundro and Hinton visited them in Pennsylvania, where Omohundro had also purchased real estate. Their neighbors later recalled that Omohundro introduced Hinton as his wife, and they therefore took her to be his white, legal spouse. Given her status as an enslaved woman, it is likely that her relationship with Omohundro, her master, was not consensual. However, no direct testimony from Hinton exists, and historians have differing interpretations. She sometimes signed her name “Mrs. Corinna Omohundro,” although the examples of this are from court records in which she was attempting to claim title as Omohundro’s legal wife in order to avoid an inheritance tax.

Hinton raised their remaining children in Richmond next to Omohundro’s slave jail, and Omohundro paid for a tutor for them and their mother. In addition to performing significant household labor, Omohundro’s records indicate that Hinton also played a substantial and direct role in his businesses, helping to clothe enslaved men, women, and children—including the so-called fancy girls—preparing for auction.

Omohundro died in Richmond sometime before July 8, 1864, when his will was executed. Family histories as well as cemetery records indicate that he purchased a plot and was likely buried in that city’s Hollywood Cemetery, although no headstone exists to mark his grave. By the time of his death he had accumulated property in Richmond, a farm in Henrico County, and more than $33,000 worth of real estate in Pennsylvania. The appraisers of his estate, fellow slave traders N. M. Lee, Robert Lumpkin, and N. B. Hill, valued his Richmond property at $84,060. This sum included the price of his house and jail, the people he enslaved, and his household furniture. To this the appraisers added $60,650 worth of real estate and farm equipment in Henrico County and, later, $26,000 from the sale of Omohundro’s two homes in Pennsylvania, which he had purchased for his children.

In his will, witnessed by Richmond mayor Richard Mayo, Omohundro took the unusual step, at least among many slave traders in similar situations, and acknowledged his children with Hinton. He did not mention his children with Louisa Tandy, referring to Hinton as “my woman” and “a kind, faithful, and dutiful woman to me and an affectionate mother.” He freed Hinton and the children, and left Hinton her choice of property in either Richmond or Philadelphia, with the remainder of his estate to be sold and invested for the benefit of his children. The collapse of the Confederate banking system, along with disputed debts and alleged misdeeds by the executor, Richard Cooper, all delayed the estate’s final settlement until the 1880s.
RELATED CONTENT
Categories:
Type:
MAP
TIMELINE
December 11, 1807
Silas Omohundro is born in Albemarle County.
March 1834
Julia A. Omohundro, the daughter of the slave-trader Silas Omohundro and an unknown mother, is born.
December 1838
Littleton J. Omohundro, the son of the slave-trader Silas Omohundro, is born. His mother is either Louisa Tandy or Martha Tandy, both of whom are enslaved.
August 1846
Silas Omohundro applies for a license to operate a "private house of entertainment" in Richmond.
June 15, 1849
Silas Omohundro Jr. is born in Richmond, the son of the slave-trader Silas Omohundro and his enslaved concubine Corinna Hinton.
1856—1864
Silas Omohundro pays his enslaved concubine Corinna Hinton once or twice a year for sewing clothing for slaves about to be sold.
ca. 1857
Silas Omohundro sends his eldest two children to Pennsylvania to be educated.
July 8, 1864
The will of Silas Omohundro is executed in Richmond, freeing his enslaved concubine, Corinna Hinton, and their seven children.
FURTHER READING

Rothman, Joshua D. Notorious in the Neighborhood: Sex and Families Across the Color Line in Virginia, 1787–1861. Chapel Hill: University of North Carolina Press, 2003.

Stevenson, Brenda E. “What’s Love Got to Do With It? Concubinage and Enslaved Women and Girls in the Antebellum South.” The Journal of African American History 98, no. 1 (winter 2013): 99–125.