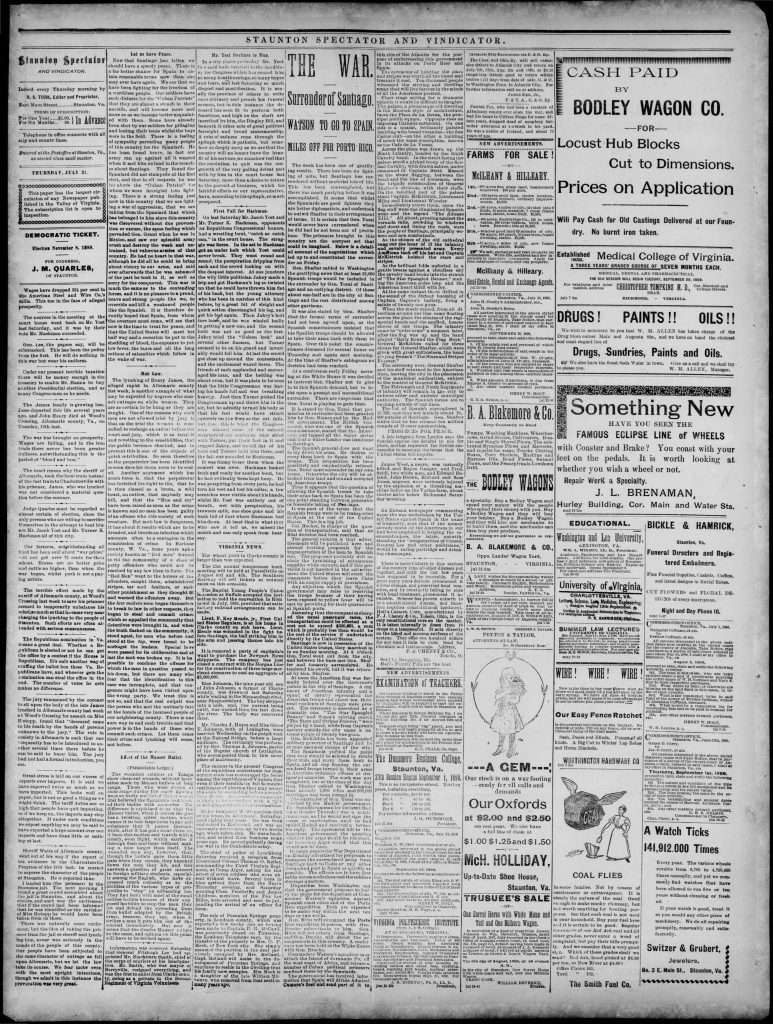 The lynching of Henry James, the alleged rapist in Albemarle county last week, is another example of what may be expected by negroes who commit outrages on white women. They are as certain to be hung as they are caught. One of the reasons why such men are not allowed trial by jury is that on the trail the woman is compelled to undergo an ordeal before the court and jury, which is so terrible and revolting to the sensibilities, that the public becomes shocked, and to prevent this is one of the objects of quick retribution. So soon therefore as the perpetrator has been identified so soon does his doom seem to be sealed. Another argument which as much force is, that the perpetrator has forfeited his right to life, that he is then classed as a brute, a wild beast, an outlow, that anybody may kill, and that the “Hue and cry” have been raised as soon as the crime is known and no man has been guilty of an offense who rids society of such a creature. But mob law is dangerous, it has about it results which are to be dreaded, and breeds an infection which amounts often to a contagion in the commission of crime. In Barbour county, W. Va., some years ago a society known as “Red Men” went to the houses of the offenders, caught them, administered stripes, tar and feathers, or such other punishment as they thought fit ad warned the offenders away. But the law makers soon began themselves to break to law in other respects, they began to steal and commit crimes which so appalled the community that detectives were brought in, and when the truth flashed on the community that detectives were brought in, it stood agast, for men who before had stood at the top, were found to be amongst the leaders. Special laws were passed for its obliteration and at last the mob was broken up. It is impossible to condone the offense for which the man in question passed to his doom, but there are many who fear that the identification in this case was incomplete, and that vengeance might have been visited upon the wrong party. We trust this is not so, and that the real culprit was the person who met the untimely fate at the hands of incensed people of our neighboring county. There is one sure way to end such trouble and that power is in the hands of those who commit such crimes. Let them cease their crime and lynching will cease not before.