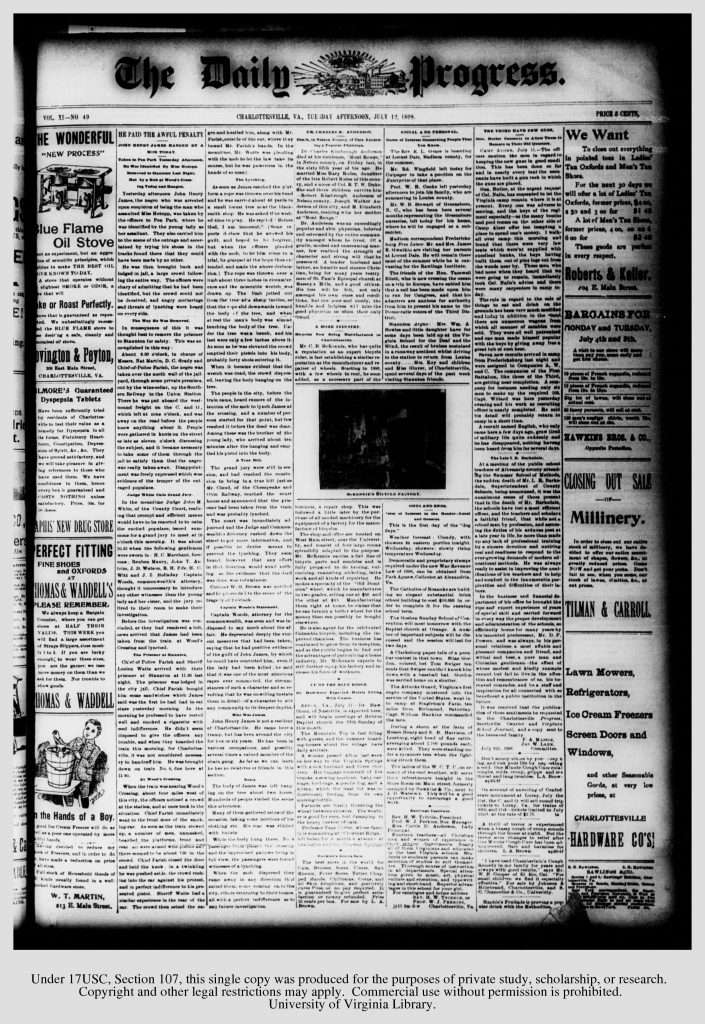 HE PAID THE AWFUL PENALTY

He Was Identified By Miss Hotopp.

Met by a Mob at Wood’s Crossing Today and Hanged.

Yesterday afternoon John Henry James, the negro who was arrested upon suspicion of being the man who assaulted Miss Hotopp, was taken by the officers to Pen Park, where he was identified by the young lady as her assailant. They also carried him to the scene of the outrage and ascertained by trying his shoes in the tracks found there that they could have been made by no other.

He was then brought back and lodged in jail, a large crowd following the entire way. The officers were chary of admitting that he had been identified but the crowd could not be deceived, and angry utterings and threats of lynching were heard on every side.

The Way He Was Removed.

In consequence of this it was thought best to remove the prisoner to Staunton for safety. This was accomplished in this way:

About 8.30 o’clock, in charge of Messrs. Nat Martin, D. C. Grady and Chief-of-Police Farish, the negro was taken over the north wall of the jailyard, through some private premises out by the wine-cellar, up the Southern Railway to the Union Station. There he was put aboard the westbound freight on the C. and O. which left at nine o’clock, and was away on the road before the people knew anything about it. People were gathered in knots on the street as late as eleven o’clock discussing the subject, and it became necessary to take some of them through the jail to satisfy them that the negro was really taken away. Disappointment was freely expressed which was evidence of the temper of the outraged populace.

In the meantime Judge John M. White, of the County Court, realizing that prompt and efficient means would have to be resorted to to calm the excited populace, issued summons for a grand jury to meet at 10 o’clock this morning. It was about 10.45 when the following gentlemen were sworn in: H. C. Marchant, foreman; Reuben Maury, John T. Antrim, J. D. Watson, R. H. Fife, H. C. Witt and J. Z. Holladay. Captain Woods, commonwealth’s attorney, thought it unnecessary to introduce any other witnesses than the young lady and her sister, and the jury retired to their room to make their investigation.

Before the investigation was concluded, or they had rendered a bill, news arrived that James had been taken from the train at Wood’s Crossing and lynched.

The Prisoner at Staunton.

Chief of Police Farish and Sheriff Lucien Watts arrived with their prisoner at Staunton at 11.30 last night. The prisoner was lodged in the city jail. Chief Farish bought him some sandwiches which James said was the first he had had to eat since yesterday morning. In the morning he professed to have rested well and smoked a cigarette with cool indifference. He didn’t seem disposed to give the officers any trouble, and when they boarded the train this morning, for Charlottesville, it was not considered necessary to handcuff him. He was brought down on train No. 8, due here at 11.40.

When the train was nearing Wood’s Crossing, about four miles west of this city, the officers noticed a crowd at the station, and at once took in the situation, and at once took in the situation. Chief Farish immediately went to the front door of the smoking car. As soon as the train slowed up, a number of men, unmasked boarded the platforms, front and rear, all were armed with pistols and there seemed to be about 150 in the crowd. Chief Farish closed the door and held the knob; in a twinkling he was pushed aside, the crowd rushing into the car against his protest, and in perfect indifference to his presented pistol. Sheriff Watts had a similar experience in the rear of the car. The crowd then seized the negro and hustled him, along with Mr. Farish, outside of the car, where they bound Mr. Farish’s hands. In the meantime, Mr. Watts was pleading with the mob to let the law take its course, but he was powerless in the hands of so many.

As soon as James reached the platform a rope was thrown over his head and he was carried about 40 yards to a small locust tree near the blacksmith shop. He was asked if he wished time to pray. He replied “Before God, I am innocent.” [Some reports declare that he avowed his guilt, and hoped to be forgiven, but when the officers pleaded with the mob, to let him come to a trial, he grasped at the hope thus extended, and made the above declaration.] The rope was thrown over a limb about three inches in circumference and the miserable wretch was drawn up. The limb jutted out from the tree at a sharp incline, so that the rope slid downwards toward the body of the tree, and when at rest the man’s body was almost touching the body of the tree. Under the tree was a bench, and his feet were only a few inches above it. As soon as he was elevated the crowd emptied their pistols into his body, probably forty shots entering it.

When it became evident that the wretch was dead, the crowd dispersed, leaving the body hanging on the tree.

The people in the city, before the train came, heard rumors of the intention of the mob to lynch James at the crossing, and a number of persons started for that point, but few reached it before the deed was done. Among these was the brother of the young lady, who arrived about ten minutes after the hanging and emptied his pistol into the body.

The grand jury were still in session, and had reached the conclusion to bring to a true bill just as Mr. Cloud, of the Chesapeake and Ohio Railway, reached the courthouse and announced that the prisoner had been taken from the train and was probably lynched.

The court was immediately adjourned and the Judge and Commonwealth’s Attorney rushed down the street to get more information, and if possible to devise means to prevent the lynching. They soon found, however that any effort in that direction would avail nothing, as the evidence that the deed was done was voluminous.

Coroner W. G. Brown was notified and he proceeded to the scene of the tragedy at 2 o’clock.

Captain Woods, attorney for the commonwealth, was seen and was indisposed to say much about the affair. He deprecated deeply the violent measures that had been taken, saying that he had positive evidence of the guilt of John James, by which he could have convicted him, even if the lady had been killed; he said that it was one of the most atrocious rapes ever committed, the circumstances of such a character and so revolting that he was unwilling to state them in detail—of a character to stir any community to its deepest depths.

John Henry James is not a resident of Charlottesville. He came here a tramp, but has been around the city for five or six years. He has been in various occupations, and possibly several times a valued member of the chain-gang. As far as we can learn he has no relatives or friends in this section.

The body of James was left hanging on the tree about two hours. Hundreds of people visited the scene this afternoon.

Many of them gathered relics of the occasion, taking some portions of his clothing etc. He coat was riddled with bullets.

While the body hung there, [obscured] the crossing and the improvised gallows being in full view, the passengers were forced witnesses of a lynching.

When the mob dispersed they came away in any direction that suited them, some coming on to the city, others returning to their homes all with a perfect indifference as to any future investigation.