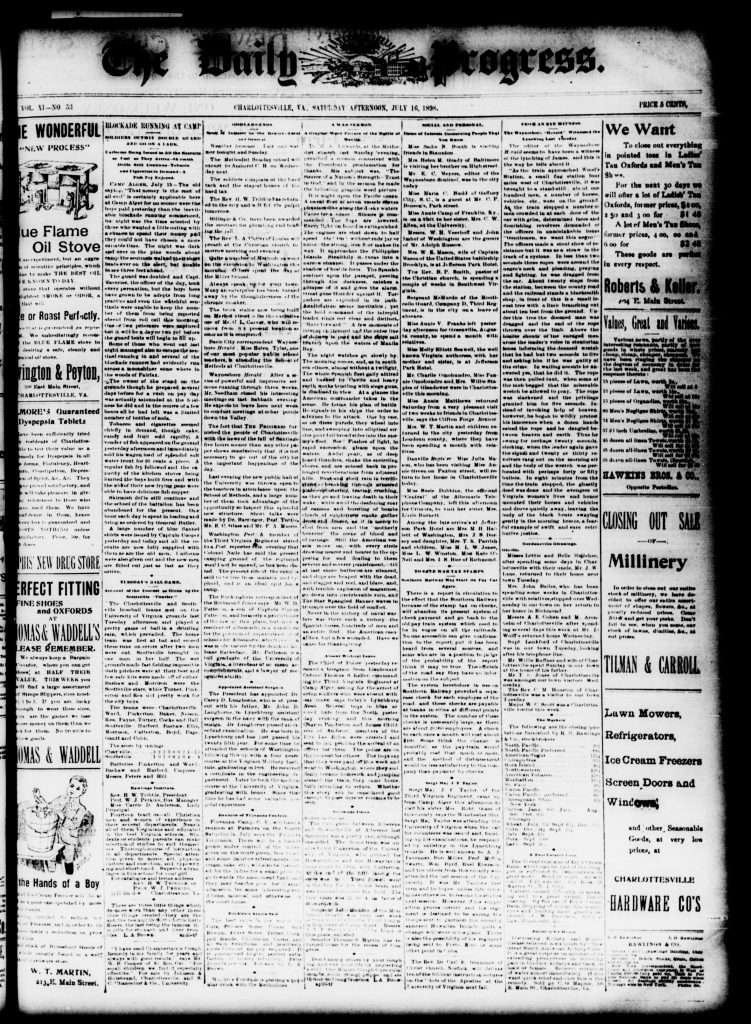 FROM AN EYE WITNESS

The editor of the Waynesboro Herald seems to have been a witness of the lynching of James and this is the way he tells about it.

“As the train approached Wood’s Station, a small flag station four miles west of Charlottesville, it was brought to a stand-still about one hundred men, a number of horses, vehicles, etc, were on the ground. As the train stopped a number of men crowded in at each door of the car with grim, determined faces and flourishing revolvers demanded of the officers in unmistakable tones “Gentlemen, we want this negro.'”

The officers made a stout show of the resistance but it was as a straw in the track of a cyclone. In less than two seconds three ropes were around the negro’s neck and pleading, praying and fighting, he was dragged from the car. About twenty steps from the station, between the county road and the railroad stands a blacksmith shop; in front of this is a small locust tree with a limb branching out about ten feet from the ground. Under this tree the doomed man was dragged and the end of the rope thrown over the limb. Above the hoarse shouts of the enraged men across the leader’s voice in stentorian tones informing the doomed wretch that he had but two seconds to live and asking him if he was guilty of the crime. In wailing accents he answered yes, that he did it. The rope was then pulled taut, when some of the mob begged that the miserable wretch be allowed to pray. The rope was slackened and the privilege granted him for five seconds. Instead of invoking help of heaven, however, he began to wildly protest his innocence when a dozen hands seized the rope and he dangled between heaven and earth. Thus he swung for perhaps twenty seconds, choking, when the leader again gave the signal and twenty or thirty revolvers rang out on the morning air and the body of the wretch was perforated with perhaps forty or fifty bullets. In eight minutes from the time the train stopped, the ghastly deed was done and the avengers of Virginia women’s lives and honor mounted their horses and vehicles and drove quietly away, leaving the body of the black brute swaying gently in the morning breeze, a fearful example of swift and sure retributive justice.