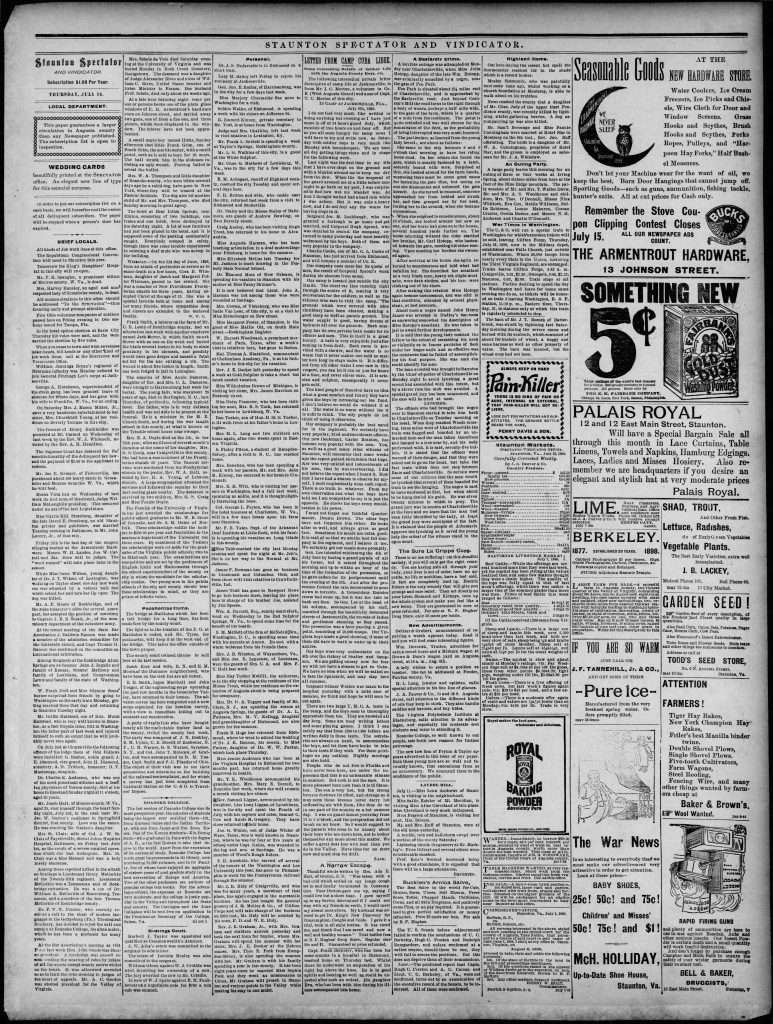 A terrible outrage was attempted on Monday near Charlottesville, when Miss Julia Hotopp, daughter of the late Wm. Hotopp, was criminally assaulted by a negro, near the gate of Pen Park.

Pen Park is situated about 2 ½ miles east of Charlottesville, and is approached by the Earlysville road. Just beyond Cochran’s Mill the road turns to the right through a body of woods, perhaps a half mile wide, to the gate of the farm, which is a quarter of a mile from the residence. The point is quite secluded and was well chosen for the commission of the deed, as the probability of being interrupted was very much lessened.

The particulars, as learned form the young lady herself, are about as follows:

She came to the city between 8 and 9 o’clock that morning to have her riding horse shod. On her return she found the date, which is usually fastened by a latch, securely bound with wire. Surprised at this, she looked around for the farm hands, supposing there must be some good cause for fastening the gate thus, but seeing no one she dismounted and unloosed the gate herself. As she turned to remount, someone approached her from behind and struck her, and then grasped her by her neck, forcing her to the ground, when she became unconscious.

When she returned to consciousness, about 10 o’clock, she looked around but saw no one, and her horse had gone on to the house, several hundred yards further on. The horse returning without the rider startled her brother, Mr. Carl Hotopp, who hastened towards the gate, meeting his sister coming. Upon meeting her brother she swooned again.

Again arriving at the house she again returned to consciousness and told what had befallen her. She described her assailant as a very black man, heavy-set, slight mustache, work dark clothes, and his toe; were sticking out of his shoes.

After making this relation Miss Hotopp again became unconscious, and was still in that condition, attended by several physicians at last accounts.

About noon a negro named John Henry James was arrested in Dudley’s bar-room as answering somewhat the description of Miss Hotopp’s assailant. He was taken to jail to await further developments.

It is said that the young lady resisted the fellow to the extent of scratching his neck so violently as to leaves particles of flesh under her finger-nails and so effective was the resistance that he failed of accomplishing his foul purpose. She was sure she could identify the man.

The man arrested was brought to Staunton by the Chief-of-police of Charlottesville on Monday night to avoid lynching a great crowd had assembled with this intent, but by a clever ruse the mob was avoided. A special grand jury has been summoned, and the case will be tried at once.

The officers who had brought the negro over to Staunton started to take him back to Charlottesville on Tuesday morning on the local. When they reached Woods crossing, three miles west of Charlottesville the train was flagged and boarded by an unmasked mob and the man taken therefrom and hanged to a tree nearby, and his body perforated with, it is said, seventy-five bullets. It is stated that the officers were warned of their danger, and that they were asked not to go on the local, but take the fast train which does not stop between Basic and Charlottesville. So certain were some of our citizens that the man would be lynched that several of them boarded the train to see the hanging. The negro is said to have confessed at first, but when about to be hung denied his guilt. He was given twenty minutes in which to pray. The grand jury was in session at Charlottesville at the time and we learn that the man had been fully identified by the lady, at least the grand jury were convinced of the fact. It is claimed that the people of Albemarle approve the lynching as it saved the young lady the ordeal of the witness stand in the open court.