The Waterhouse narrative is accompanied by a text written by mathematician Henry Briggs, a compilation of Virginia Company investors, and a list of the equipment and supplies needed by prospective colonists. But Waterhouse’s description of the Indian attack, released in August 1622, is what historians have found most useful. Although another eyewitness report of the attack, Morninge Virginia, was published in July of that year, no copies are known to have survived. Captain John Smith, whose Generall Historie of Virginia, New-England, and the Summer Isles was published in 1624, made use of Waterhouse’s account but amplified it with additional details. Captain Anthony Chester, who was in Virginia at the time of the attack, described how the Jamestown settlers hastily prepared to defend themselves. Waterhouse’s “Declaration,” however, was the first document to provide detailed background information on the attack, a list of the slain, and justification for retaliation.

The attack followed eight years of peace between the English colonists, who had settled at Jamestown in 1607, and the Indians of Tsenacomoco, a paramount chiefdom of twenty-eight to thirty-two Algonquian-speaking groups centered around the James, Mattaponi, and Pamunkey (York) rivers. The end of the First Anglo-Powhatan War (1609–1614), prompted in part by the marriage of Pocahontas, coincided with the introduction into the colony of a saleable, West Indies–grade of tobacco by Pocahontas’s new husband, John Rolfe. With revenue from tobacco exports, colonists could more easily fend for themselves in Virginia. Gone were the days when settlers either obtained corn from Indians or starved. Tobacco farming required additional colonists, however, and many were lured to Virginia by the headright system, instituted in 1618, which awarded 50 acres of land for each person who paid his or her own or any other person’s passage into Virginia. Laborers poured into the colony and built plantations on the James River and Eastern Shore—out of Jamestown, in other words, and farther into Indian lands.

Powhatan, the mamanatowick, or paramount chief, of Tsenacomoco until his death in 1618, had variously attempted to absorb the English into his empire or starve them into fleeing. The colonists, meanwhile, arrived at Jamestown with instructions from the Virginia Company to treat the Indians better than the Spanish had treated their native subjects in Mexico and Peru. Following the advice of Richard Hakluyt (the younger), they perceived their mission to include absorbing the Indians into their empire-to-be by civilizing them through Christianity. The peace that lasted from 1614 until 1622 lulled the English into thinking that this plan had merit. Instead, Powhatan’s younger brother, Opechancanough, was planning for war.

Waterhouse gathered the facts for his narrative from letters sent to the Virginia Company by colonial authorities and from a handful of eyewitnesses who sailed back to England on the Sea-flower and other ships to report their experiences. His text is a catalog of often-gruesome details mixed with self-righteous outrage that frequently devolves into a racially demeaning diatribe against the “treacherous,” “divellish,” “perfidious and inhumane” Indians. Beginning with mention of a November 1621 treaty, “solemnly ratified and sworne” and “stamped in Brasse” to one of Powhatan’s most notable oak trees, Waterhouse suggests that “the peace concluded [was] so firme, as the Skie should sooner fall then it dissolve.” It allowed the English planters to grow their tobacco and the Indians to enjoy greater access to English ways, “seeming to open a faire gate for their conversion to Christianitie.”

According to Waterhouse, the colonists were so sure of their safety that they ventured out unarmed, except while hunting, and opened their homes to the Indians and received them hospitably. The Indians, in turn, willingly served as guides and brought to the settlers game, fish, and fowl that they exchanged for manufactured goods. Such an environment never provoked the English to question the fact that “the Plantations of particular Adventurers and Planters were placed scatteringly and straglingly as a choice veyne of rich ground invited them, and the further from neighbors held the better.” That the English largely did not settle in more easily defended towns became a crucial part of Opechancanough’s strategy. Waterhouse accuses the Indians of preying on the colonists’ trust. Early on March 22, 1622, small bands of Opechancanough’s men “came unarmed into our houses, without Bowes or arrowes, or other weapons, with Deere, Turkies, Fish, Furres, and other provisions.” Some even sat down for breakfast, only to “basely and barbarously” murder the colonists with their own tools, “not sparing eyther the age or sexe, man, woman or childe.” The Indians were not “content with taking away life alone,” Waterhouse writes; “they fell after againe upon the dead, making as well as they could, a fresh murder, defacing, dragging, and mangling the dead carcasses into many pieces, and carrying some parts away in derision, with base and bruitish triumph.” In all, at least a quarter of Virginia’s English population was killed. (Waterhouse, presumably in an attempt to minimize the damage, puts the ratio at one-twelfth.) Numbering the dead at 347, the document lists them by name and includes John Waterhouse, who may have been a kinsman of Edward Waterhouse.

The Indians, according to Waterhouse, were “beasts,” “without remorse or pitty,” a “Viperous brood” of “hell-hounds” and “wicked Infidels” who “despised Gods great mercies.” They were “more fell [foul] then Lyons and Dragons,” which at least have been known to gratefully acknowledge the kind deeds of their masters. By way of stark contrast, Waterhouse tells the story of “[t]hat worthy religious Gentleman, Master George Thorpe Esquire,” a member of the governor’s Council and an original investor in the Berkeley Hundred plantation. Thorpe hoped to “truly and earnestly affect their [the Indians’] conversion” to Christianity, and “was so tender over them” that “[h]e thought nothing too deare for them.” When they complained about the colonists’ large and fierce dogs, he “caused some of them [the dogs] to be killed in their presence, to the great displeasure of their owners.” 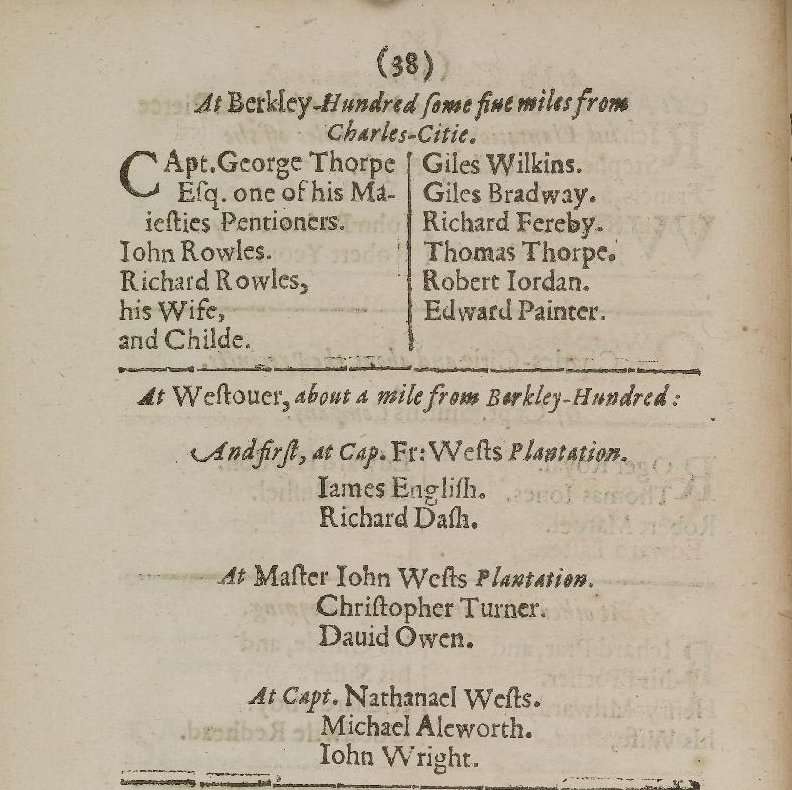 Victims of the 1622 Indian Attacks

Thorpe was especially “kinde and beneficiall” to Opechancanough, whom he presented with a lock and key for the new “fayre house” that Thorpe had built for him “according to the English fashion.” Thorpe also talked to Opechancanough about religion, and according to Waterhouse, the chief “confessed, moved by naturall Principles, that our God was a good God, and better much then theirs.” So much the worse, then, that Thorpe was killed during the attack, the Indians perpetrating “so many barbarous despights and foule scornes after to his dead corpes, as are unbefitting to be heard by any civill eare.” From Waterhouse’s perspective, Thorpe’s death, especially, forfeited the Indians’ right to expect “Gods great mercies so freely offered to them.” In fact, their rejection of the English god might be seen as the cause of their violence. Protestant Christians, by definition, are good, while “pagans” and “infidels” must be conquered and controlled. Waterhouse notes that it was “a converted Indian” (perhaps a man named Chauco) who alerted English authorities to the attack in time to save lives at Jamestown proper.

Waterhouse’s preoccupation with religion in his report may not have reflected the actual priorities of the Virginia Company, at least at the time of the attack. Although conversion had been a primary goal of English colonization dating back to the works of Richard Hakluyt (the younger), the introduction of tobacco as a money crop and the flood of new colonists had created priorities more focused on Virginia’s economic possibilities. In order to lay the groundwork for retaliation, Waterhouse may have felt it necessary to emphasize the colonists’ altruistic intentions toward the Indians.

Waterhouse’s “Declaration” marks a turning point in relations between the Jamestown colonists and the Indians of Tsenacomoco. No longer dependent on the Indians to survive, rebuffed in their attempts to Christianize them, and in constant need of more land, the English now felt justified in attempting to destroy them completely. Because of the attack, Waterhouse argues, the English “may now by right of Warre, and the law of Nations, invade the [Indians’] Country, and destroy them who sought to destroy us … Now their cleared grounds in all their villages (which are situate in the fruitfullest places of the land) shall be inhabited by us …” Removing the Indians will also increase the deer, wild turkey, and fowl populations and put a halt to the Indians’ poaching of English livestock. In the end, Waterhouse writes, “conquering them is much more easie then of civilizing them by faire meanes, for they are a rude, barbarous, and naked people …” Better to take them “by force, by surprize, by famine in burning their Corne, by destroying and burning their Boats, Canoes, and Houses, by breaking their fishing Weares, by assailing them in their huntings, whereby they get the greatest part of their sustenance in Winter, by pursuing and chasing them with our horses, and blood-Hounds to draw after them, and Mastives [mastiffs] to teare them …”

Waterhouse’s vision did not come to pass immediately. Panicked colonists, waiting for Opechancanough to follow up on his initial assaults, suffered from severe food shortages during the winter of 1622–1623; Opechancanough, meanwhile, likely hoped that they would just abandon Virginia. Waterhouse insists that the attack was part of a strategy of “utter extirpation,” but some scholars believe that the Indians intended their attack and its consequences as a kind of warning. If so, the warning did not work. Instead, it initiated the long and sometimes bloody Second Anglo-Powhatan War (1622–1632), which by the winter of 1623–1624 saw the Indians, rather than the English, going hungry.

Waterhouse concludes, without irony, that what “produced this bloody act” (i.e., the March 22 attack) was “the dayly feare that possest them [the Indians], that in time we by our growing continually upon them, would dispossesse them of this Country, as they had beene formerly of the West Indies by the Spaniard.” This likely was true, and by the end of the Third Anglo-Powhatan War (1644–1646), punctuated by the capture and death of Opechancanough, this largely is what happened.

RELATED CONTENT
Categories:
Related SOLs:
MAP
TIMELINE
March 21, 1622
Chauco is one of several Virginia Indians who saves the lives of some English colonists by warning of Opechancanough's plans to attack their settlements the next day.
March 22, 1622
Indians under Opechancanough unleash a series of attacks that start the Second Anglo-Powhatan War. The assault was originally planned for the fall of 1621, to coincide with the redisposition of Powhatan's bones, suggesting that the attack was to be part of the final mortuary celebration for the former chief.
July 1622
Morninge Virginia, an eyewitness report of the attack by Virginia Indians on colonists that occurred on March 22, is published in England. No copies are known to have survived.
August 1622
A Declaration of the state of the Colonie and Affaires in Virginia … is published by the Virginia Company of London and contains a narrative, by Edward Waterhouse, describing the attack by Virginia Indians on colonists that occurred on March 22.
September 1622
After their major assaults in March, Opechancanough and his forces resume guerrilla attacks on the English colonists.
FURTHER READING
CITE THIS ENTRY