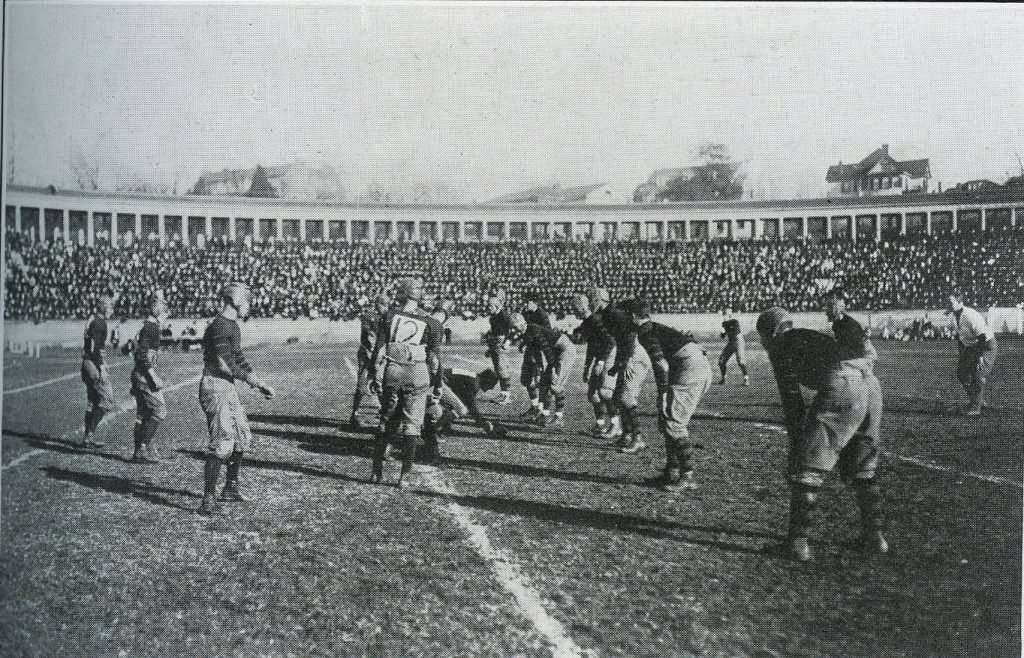 Charles Rogers Fenwick was the son of Edward Taylor Fenwick, a patent attorney, and Clara Louise Gulager Fenwick. He was born on August 11, 1900, in East Falls Church, in Alexandria County (after 1920 Arlington County). After attending public schools in Washington, D.C., he served in the University of Virginia’s Student Army Training Corps tank corps during the autumn of 1918, at the end of World War I (1914–1918), and then matriculated at the university in January 1919. He began his studies in the engineering school but transferred to the academic school in 1921 and then began studying law during the 1922–1923 academic year. Fenwick excelled in athletics, was named to several regional all-star football teams as a tackle, and fought as a heavyweight on the boxing team. He continued to display his enthusiasm for sports later in life by serving as a line coach at the University of Virginia and at the University of Maryland in the 1920s, as a member of the State Wrestling and Boxing Commission (later the State Athletic Commission) from 1934 until his death, and as president of the Washington Touchdown Club. He also served as president of the University of Virginia Alumni Association.

Fenwick passed the Virginia bar examination in 1924. Having undertaken additional studies at the George Washington University, he received an LLB from the University of Virginia in 1927. Fenwick specialized in patent and trademark law and became a senior partner of Mason, Fenwick, and Lawrence, one of the nation’s oldest patent law firms and one that his grandfather had helped found. On December 10, 1929, he married Eleanor Russell Eastman. They had no children.

Fenwick became involved in politics in the 1930s as a leader of the local chapter of Young Democrats. During that decade he chaired the Arlington County Democratic Committee and the congressional district committee and also sat on the Democratic State Central Committee. Fenwick generally supported the Democratic Party organization of Harry F. Byrd Sr. and in 1939 won election to the House of Delegates from Arlington County. In three consecutive two-year terms he served on the Committees for Courts of Justice, Federal Relations and Resolutions, Finance, Interstate Cooperation, Militia and Police, and Rules. During World War II he attained the rank of lieutenant colonel while serving as chief of the Royalty Adjustment Branch at an Army Air Forces base in Ohio.

While still in uniform in 1945, Fenwick sought the Democratic Party nomination for lieutenant governor against Lewis P. Collins, of Marion, another Byrd Organization supporter, and Leonard G. Muse, of Roanoke, an opponent of the organization. Byrd chose not to endorse either of his political allies, which split the organization vote. Fenwick won a close primary by a margin of 572 votes out of more than 135,000 cast, with Muse finishing a distant third. Some unusual voting patterns suggested that the friends of each candidate, not knowing what Byrd had wanted, went out of their ways to ensure victory. Fenwick won Wise County with a vote of 3,307 to 122, and Collins won Appomattox County with an equally suspicious total of 1,610 to 25. When Collins challenged the Wise County returns, investigators found that twenty-five of the twenty-seven poll books had disappeared. Judge Julien Gunn, of Richmond, in whose court Collins filed his challenge, threw out all the Wise County returns and declared Collins the victor. Fenwick, who had raised issues of irregularities in several other counties, magnanimously accepted the decision.

In the Senate of Virginia

Two years after relinquishing his seat in the House of Delegates to run for lieutenant governor (the attempt was unusuccessful), Fenwick won the seat representing Arlington County in the Senate of Virginia and served until his death. He became the dependable representative from Northern Virginia who brought recognition and rewards to that often-neglected area. But reflecting the region’s distinctiveness, he also developed a reputation for independence and progressivism that precluded his winning Byrd’s support for higher office. In 1953 Fenwick challenged Byrd’s favored candidate, Thomas B. Stanley, in the gubernatorial primary but lost after a lackluster campaign.

During his career in the Senate of Virginia, Fenwick served on the committees for Courts of Justice; County, City and Town Organizations (later Counties, Cities and Towns); Finance; Roads and Internal Navigation (which he chaired in 1966 and 1968); Moral, Social and Child Welfare (later Welfare, which he chaired in 1962 and 1964). He sat on several legislative councils and commissions, including the Virginia Advisory Legislative Council from 1942 to 1946 and again from 1958 until his death. Fenwick became known for his advocacy of health and education legislation, improvements in mental hospitals and clinics, and annual rather than biennial legislative sessions.

Following the Supreme Court’s 1954 ruling in Brown v. Board of Education that mandatory racial segregation in public schools was unconstitutional, Fenwick served on the two State Commissions on Public Education, one formed in 1954 (known as the Gray Commission) and the other in 1959 (known as the Perrow Commission), that called for a relatively moderate response. He opposed the school-closing bills that the General Assembly passed as part of its Massive Resistance program in 1956 and that the governor employed in 1958 to close schools in several cities and counties when federal courts ordered them to desegregate. In 1956 Fenwick helped draft legislation passed at an extra session that was designed to impede the work of attorneys for the National Association for the Advancement of Colored People (NAACP) in challenging Virginia’s segregation laws. During the extra assembly session in April 1959, he voted with the narrow majority requiring the State Board of Education to adopt a pupil placement plan. 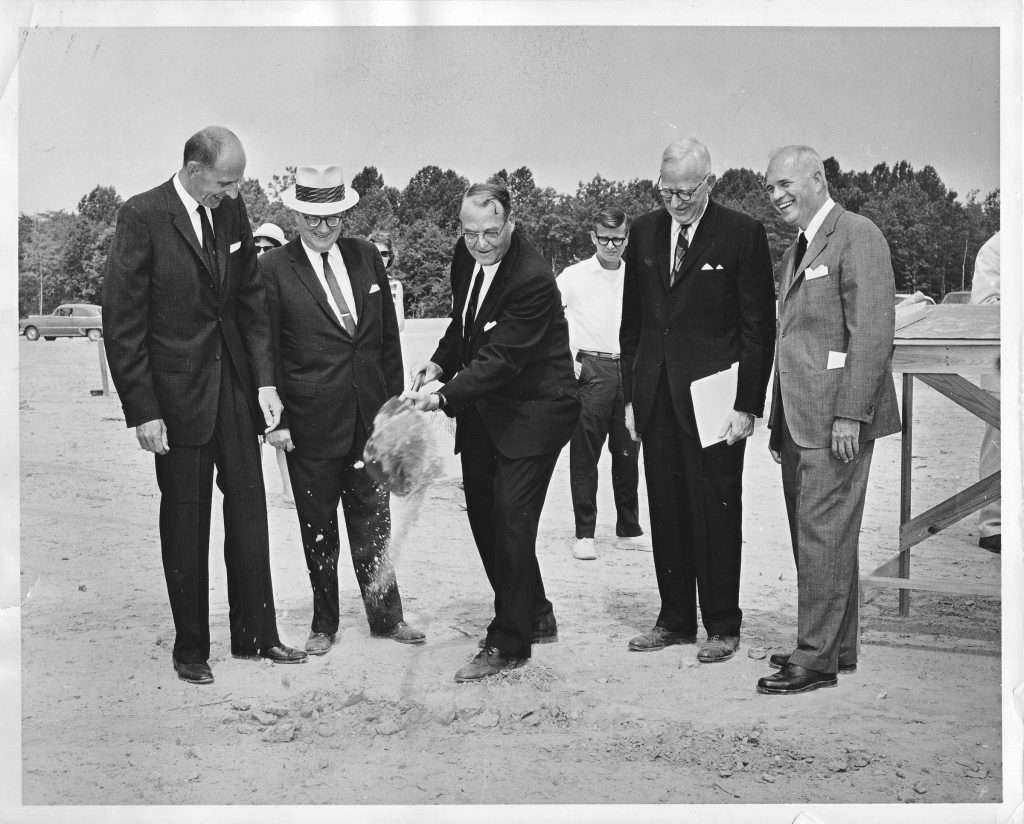 Ground-breaking Ceremony for the George Mason College Campus in Fairfax

Fenwick helped found and from 1961 to 1962 chaired the Washington Metropolitan Regional Conference (later the Metropolitan Washington Council of Governments), which tackled issues of land use, sanitation and water supply, and transportation in the District of Columbia, Maryland, and Virginia. Concerned with mounting traffic problems facing his constituents, he represented Virginia on the regional Joint Transportation Commission, established in 1954. He helped negotiate the interstate compact that in 1960 created the Washington Metropolitan Transit Commission to regulate the region’s public transportation. Building on this success, Fenwick and others developed a second agency to construct and operate a regional subway system, and in 1966 he oversaw passage in the General Assembly of an act creating the Washington Metropolitan Area Transit Authority (WMATA). As chair of Virginia’s Airport Facilities Study Commission in 1956 and 1957, Fenwick recommended establishing an authority to build and operate airports in the state. He chaired the Virginia Airports Authority from its creation in 1958 and in 1968 joined the Dulles International Airport Development Commission.

Fenwick died in an Arlington hospital on February 22, 1969, of complications after surgery for diverticulitis and was buried at Oakwood Cemetery, in Falls Church. In 1983 the WMATA named its Potomac River bridge at Fourteenth Street for him.