Harry Branham Davis was born on July 24, 1893, in Princess Anne County and was the son of Samuel J. Davis and Ida V. Fisk Davis. He grew up on the family farm that his grandfather had purchased before the American Civil War (1861–1865). After graduating from Norfolk Academy in 1910, Davis entered Hampden-Sydney College but withdrew during his freshman year because his father’s illness required that he return to the farm. Later he became associated with the Truckers’ Ice and Cold Storage Corporation, of Norfolk, of which he ultimately became president. Davis married Rosa Lee Woodhouse in Princess Anne County on July 26, 1917. The childless couple legally separated in 1931 but never divorced. 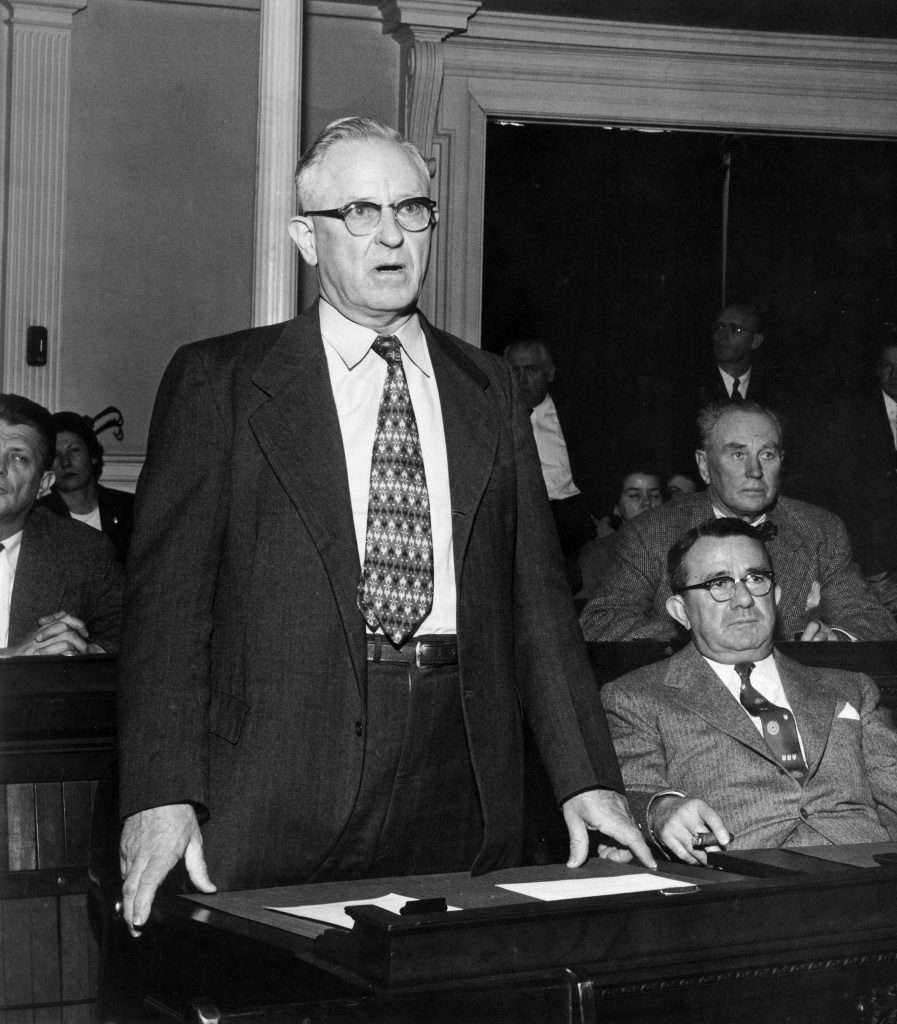 Harry B. Davis in the General Assembly

Following the U.S. Supreme Court’s 1954 ruling in Brown v. Board of Education that mandatory racial segregation in public schools was unconstitutional, the governor appointed Davis to the Commission on Public Education, which was charged with studying the effects of the court’s decision and making suitable recommendations. At their first meeting, the commission members chose Davis as vice chair. After a long study, the Gray Commission (which the press so named for its chair, state senator Garland Gray) issued a report proposing that pupil assignment be left to local school boards and recommending a program of tuition grants from public funds for any student who wished to attend a private, segregated school.

Harry F. Byrd Sr. and other leaders of the state Democratic organization rejected the local option approach in favor of a plan of Massive Resistance to all desegregation orders. The General Assembly accordingly created a new state agency, the Pupil Placement Board, to rule on all students’ applications to transfer and required the governor to close any public school under court order to desegregate. If a county or city chose to reopen a closed school, it could not use state money for its support. Davis opposed Massive Resistance despite pressure from Sidney Kellam, a Princess Anne County political leader who was a confidant of Byrd. Davis declared that he believed “in trying to preserve the public school system by minimizing integration,” but “conditions vary so in Virginia that localities should be free to meet their individual problems. Virginians have a choice of closing the public schools or having a few Negroes here and there in the white schools.”

After state and federal courts ruled the Massive Resistance laws unconstitutional, the governor created a new Commission on Public Education with state senator Mosby Garland Perrow as chair and Davis as vice chair. Like the Gray Commission, the Perrow Commission endorsed a local assignment approach, for which Davis provided the tiebreaking vote when his House Committee on Education approved it in April 1959.

Davis also demonstrated his independence from the Kellam Organization on other matters, including judicial appointments, and paid a high price. After county party officials assured him early in 1959 that he would have no opposition in the Democratic primary, Pressley Byrnes White, a Kellam loyalist and chair of the county electoral board, challenged Davis for nomination to his seat in the House of Delegates. Loss of the Kellam Organization’s support doomed Davis’s campaign. Despite his long and distinguished service in the General Assembly, Davis lost to White by a vote of 5,789 to 4,383. Davis attributed his defeat to the personal intervention of Byrd; the sudden switch by county officeholders who had signed Davis’s petitions of candidacy suggests that Kellam and Byrd were responsible. In his private correspondence Davis also complained about a whispering campaign against his long romantic relationship with Lucile Brown, who lived with the Davis family and provided health care for his widowed mother. Organization leaders had probably known about the relationship before Davis opposed Massive Resistance but exploited it to punish him for his disloyalty.

Returning to private life, Davis remained interested in the affairs of the new city of Virginia Beach after its merger with Princess Anne County in 1963. He and his sister sold land to the city for a park in 1986 and provided part of the cost themselves. Davis died in Norfolk on July 18, 1987, and was buried at Riverside Memorial Park.