After the mid-seventeenth century, enslaved people in Virginia and throughout the South were not permitted to enter legal marriages. Although slaves regularly entered non-sanctioned marriages, slaveholders also regularly disregarded those relationships and separated families at will. The Cohabitation Act of 1866 had its origins in 1864, when a constitutional convention met in Alexandria and prepared and put into effect a new constitution for what was known at the time as the Restored government, the government of the portion of Virginia that remained one of the United States during the Civil War. The Constitution of 1864 abolished slavery.

On December 6, 1864, in his first annual address to the General Assembly after the adoption of the new constitution, Governor Francis H. Pierpont made several recommendations for changing state laws as a consequence of the legal end of slavery in the part of Virginia over which his government had jurisdiction. “A perplexing question to the minds of many arises out of the marital relations which now exist among these freed people,” he informed the legislators. “The code of slavery disregarded the marital rights of slaves, yet they formed their matrimonial relations. Many of them have been separated by the arbitrary power of the master by selling husband or wife who were carried to distant parts.”

The governor recommended that the assembly pass a law recognizing as legal the marriages that enslaved men and women had entered into “according to the usages existing among them while in a state of slavery,” that such married couples as had been permanently separated by their masters be regarded as legally divorced, and that their acknowledged children be declared legally legitimate. The assembly did nothing on that subject during that session.

Slavery was effectively abolished in Virginia when the Confederate government collapsed at the end of the Civil War, the U.S. Army enforced the Emancipation Proclamation, and the Constitution of 1864 extended the Restored government’s authority throughout the state. Pierpont moved the capital of the Restored government to Richmond in the spring of 1865, and the assembly authorized election of a new assembly in October that consisted of representatives of all the counties and cities of Virginia. When the new assembly first met on December 4, 1865, the governor renewed his recommendations that the laws be changed for the benefit of the freed people and again asked the legislators to legalize marriages begun in slavery times and to make their acknowledged children legitimate.

“A law should be passed,” Pierpont urged, “requiring the clerk of each county or corporation court to keep a book, in which, at the joint request of a negro man and woman, who have heretofore been living as man and wife, he shall register their names and the date of their marriage … This registry should be considered a lawful marriage and legitimate the children of the parties, and impose on them all the obligations of husband and wife and of parents. A license should be required to be obtained by those desiring to marry, as in the case of white persons; but a separate register should be kept of all such licenses granted. I would recommend that a law be passed authorizing the courts to grant permission to colored ministers of the gospel to celebrate the rites of matrimony.” 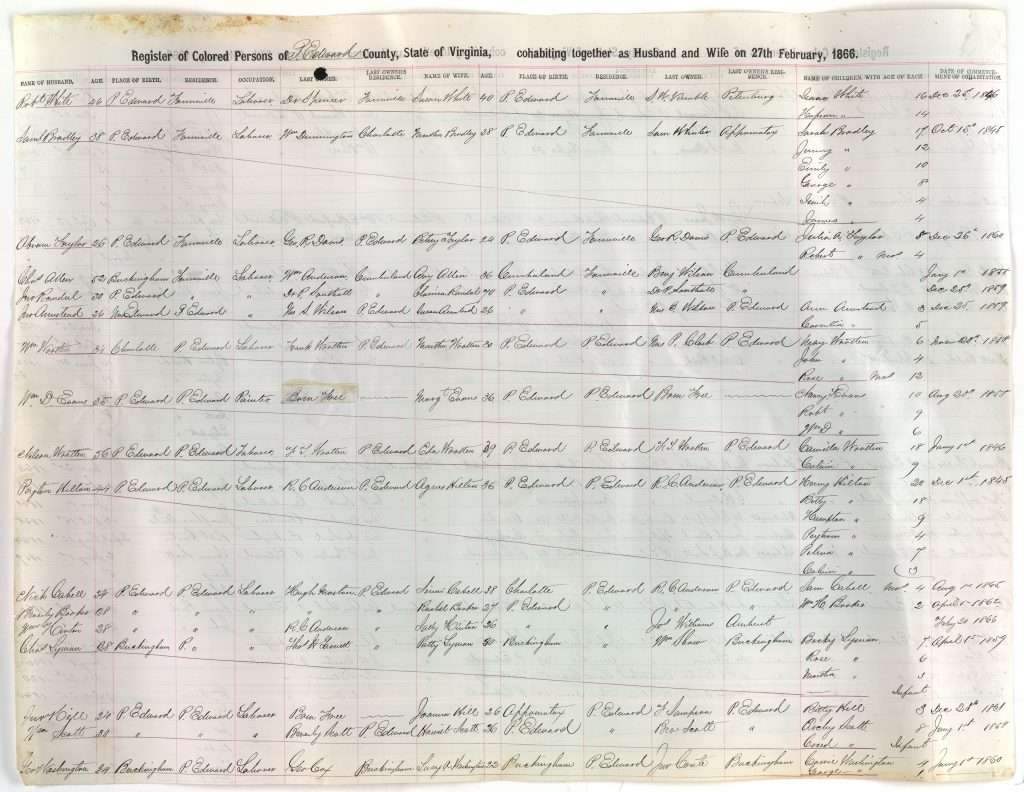 On February 27, 1866, the General Assembly passed “An Act to Amend and Re-Enact the 14th Section of Chapter 108 of the Code of Virginia for 1860, in Regard to Registers of Marriage; and to Legalize the Marriages of Colored Persons now Cohabiting as Husband and Wife.” The bill passed both houses in voice votes, and newspapers reported nothing about the legislative debates, so it is not known whether or how many members may have opposed it. The new law legalized marriages between “colored people” and declared that marriages that people entered into when one or both were enslaved were legal marriages and that the acknowledged children of the parents were legitimate.

It is very likely that all or almost all of the city and county clerks in Virginia compiled registers of marriages during the following weeks and months, although all of them do not survive. The legalization of tens of thousands of Virginians’ marriages and the legitimation of children was of extreme importance to the freed people and their families. For the first time, they had legal protection for their marriages and families. Widows and widowers for the first time could inherit property from their spouses and children could inherit property from their parents in the absence of a will. Marriage registries also allow descendants, genealogists, and historians a wealth of personal information to compile social and regional portraits of freed people and their families.