West Virginia’s impending statehood on June 20, 1863, forced Governor Francis Harrison Pierpont to move the seat of the Unionist government from Wheeling to Alexandria effective August 26, 1863. When the General Assembly convened on December 7, Pierpont requested that it call a constitutional convention to meet two compelling needs. First, because several of the prescribed judiciary districts now lay in West Virginia, the Virginia Supreme Court of Appeals could not organize and meet until a constitutional convention altered the district boundaries. Second, Pierpont believed that the state must abolish slavery. Because the Emancipation Proclamation had freed the slaves in all but a few Virginia counties, the Unionist counties in northern Virginia, on the Eastern Shore, and around Norfolk were in an anomalous position. As long as slavery remained legal, Pierpont warned that he would have to enforce warrants seeking the return of runaways, which he knew the Union army would resist. The General Assembly immediately passed enabling legislation on December 18, 1863, calling for the election of convention delegates to take place on January 21, 1864.

Members of the Convention

At the convention, seventeen delegates represented the counties of Accomack, Alexandria (later Arlington), Charles City, Elizabeth City, Fairfax, James City, Loudoun, New Kent, Norfolk, Northampton, Princess Anne, Warwick, and York, and the cities of Alexandria, Norfolk, Portsmouth, and Williamsburg. None of the members had sat in the constitutional convention of 1850–1851 or in the secession convention, and only five had previous legislative service. At least four delegates owned or had at one time owned slaves, three of them as late as 1860.

The delegates convened in Alexandria on February 13, 1864, in the U.S. District Court Room, where they met through April 11. One of their first acts was to deny access to the convention to newspaper reporters who had refused to take an oath of loyalty to the Restored government. There is only limited knowledge of what went on at the convention. A fifty-two-page journal recording the convention business and roll-call votes was published, but no formal record of the debates and proceedings was published. The editor of the Virginia State Journal, W. J. Cowing, also served as secretary of the convention and published accounts of some of the debates in his own newspaper; but very few issues of the paper survive, and only one for the time when the convention met.

The delegates debated whether the abolition of slavery should be gradual or immediate, and whether it should be compensated in any way. On March 10 they voted on the unanimous adoption of the committee report abolishing slavery, which became Article IV, sections 19 through 21 of the new constitution. The final vote was 15 to 1, with William Moore, a Northampton County farmer, casting the lone negative vote and John Stone, a Princess Anne County farmer, not recording a vote at all. The four delegates who are known to have held slaves before 1860 all voted to abolish the institution. The New York Times reported that 100 guns fired in the city and that bells rang throughout Alexandria in honor of the event. 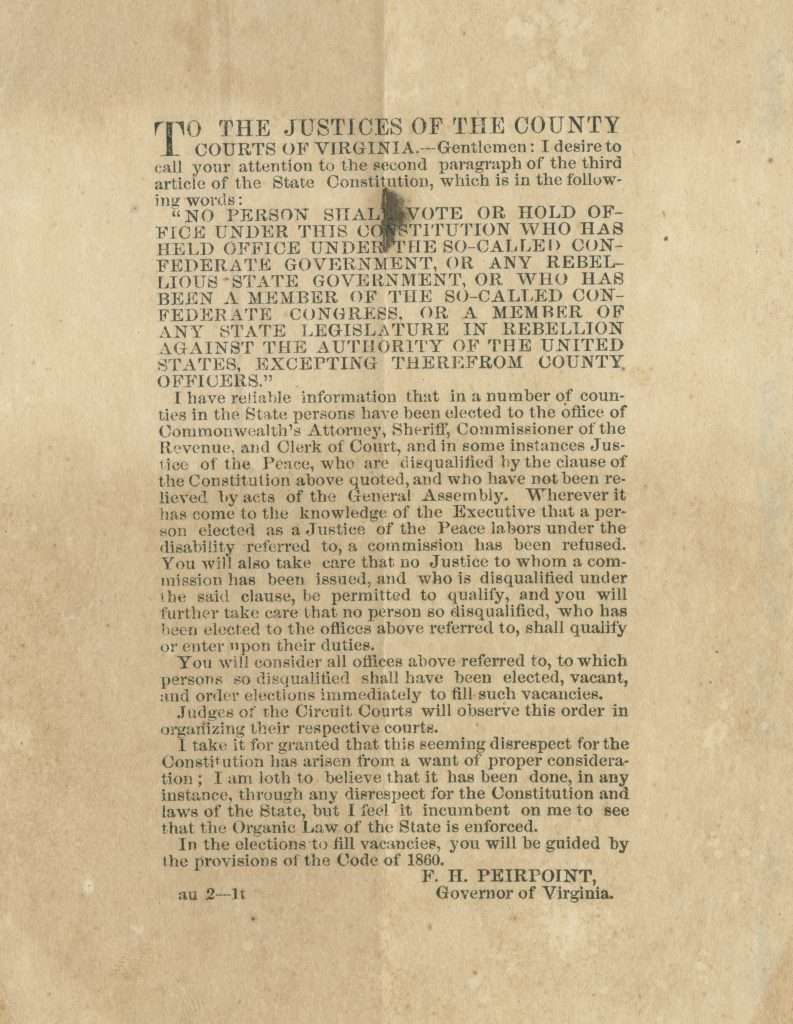 To the Justices of the County Courts of Virginia.

After some contentious debate, the convention agreed by a vote of 16 to 1 to modify the voting qualifications established in the Constitution of 1851. Under what became Article III of the new constitution, all adult white men age twenty-one or older who had resided in Virginia for one year (reduced from three years in the 1851 constitution) and in their county, city, or town for six months were eligible to vote if they had not held civilian office or served in the pro-Confederate state legislature meeting in Richmond or in the Confederate Congress.

Another issue of serious contention was the method of bringing the new constitution into effect. The Constitutions of 1830 and 1851 and the Ordinance of Secession had all been submitted to the electorate for approval. On April 4 the convention delegates on a vote of 7 to 10 rejected a resolution to submit the constitution to the voters for ratification and instead chose to proclaim it in force. In this case the vote split along regional lines. All three Eastern Shore delegates and four of the six northern Virginia delegates preferred ratification, while the eight Norfolk-area delegates voted solidly for proclamation.

On April 7 the convention voted 13 to 4 to adopt the new constitution and consequently put it in force. All four delegates who voted against the final document (two from the Eastern Shore and two from northern Virginia) had supported submitting it to the voters for ratification, and one of them (William Moore, of Northampton County), had also been the sole negative vote on abolishing slavery. Twelve of the seventeen delegates signed the constitution the next day. The convention concluded on April 11 with a unanimously adopted resolution asking the General Assembly to pass a homestead exemption and another one endorsing Lincoln for president in that autumn’s election.

The new constitution recognized the creation of West Virginia as a separate state both directly (by authorizing the General Assembly to agree with West Virginia on how to pay off the shared antebellum public debt) and indirectly (in establishing House and Senate districts that did not include the West Virginia counties, except for Berkeley and Jefferson counties, which had not yet joined West Virginia). It also instituted a change reformers had long sought in requiring voting by paper ballot for state officers and members of the General Assembly. It did not set up a public school system, but it did provide a method of funding primary and free schools through a poll tax. It reduced from five to three the number of judges on the Supreme Court of Appeals.

Although the constitution did abolish slavery, it did not address the status or rights of African Americans, so Governor Pierpont requested several actions from the first General Assembly that met after the constitution went into effect. Because labor and business transactions would require blacks and whites to enter into contracts with one another, Pierpont instructed the assembly to pass laws allowing blacks to testify in contract cases and at trials for injury of person or property. He further suggested that all laws prohibiting testimony by black witnesses needed to be abolished; otherwise he feared that military courts would claim exclusive jurisdiction in a large class of criminal cases. Pierpont also suggested that previously unrecognized slave marriages ought to be considered legal and binding under the common law. 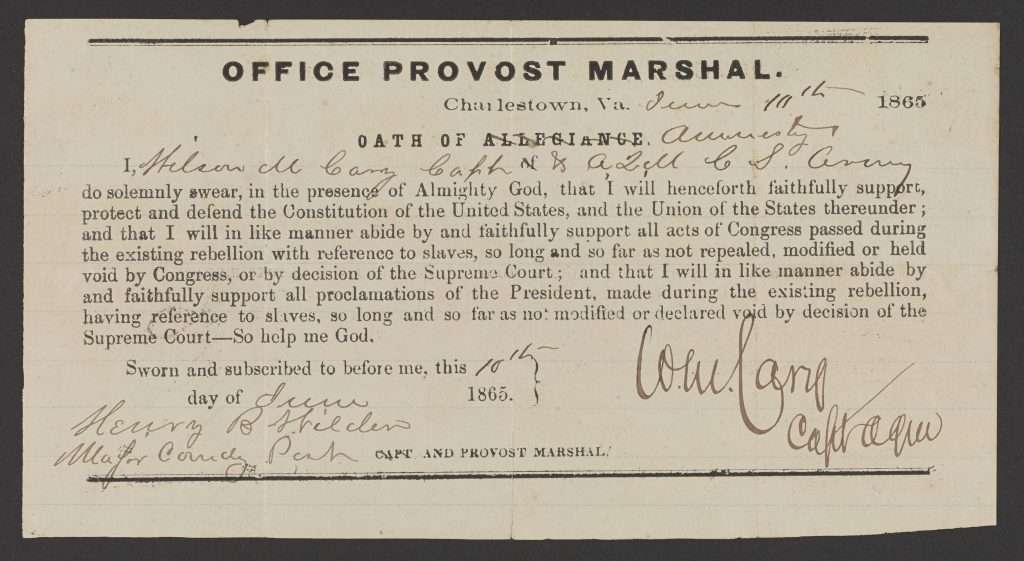 Initially only the areas of the state then under Union control recognized the authority of the Constitution of 1864, but after the defeat of the Confederacy in May 1865 it became effective for all of Virginia. A five-day extra session of the General Assembly met in Richmond in June 1865 and, at Pierpont’s urging, restored voting rights to most supporters of the Confederacy, provided they took the amnesty oath or received special pardon from the president. The Constitution of 1864 remained in effect until July 6, 1869, when voters ratified the so-called Underwood Constitution of 1869 and rejected separate provisions that would have disfranchised men who had held civil or military office under the Confederacy.