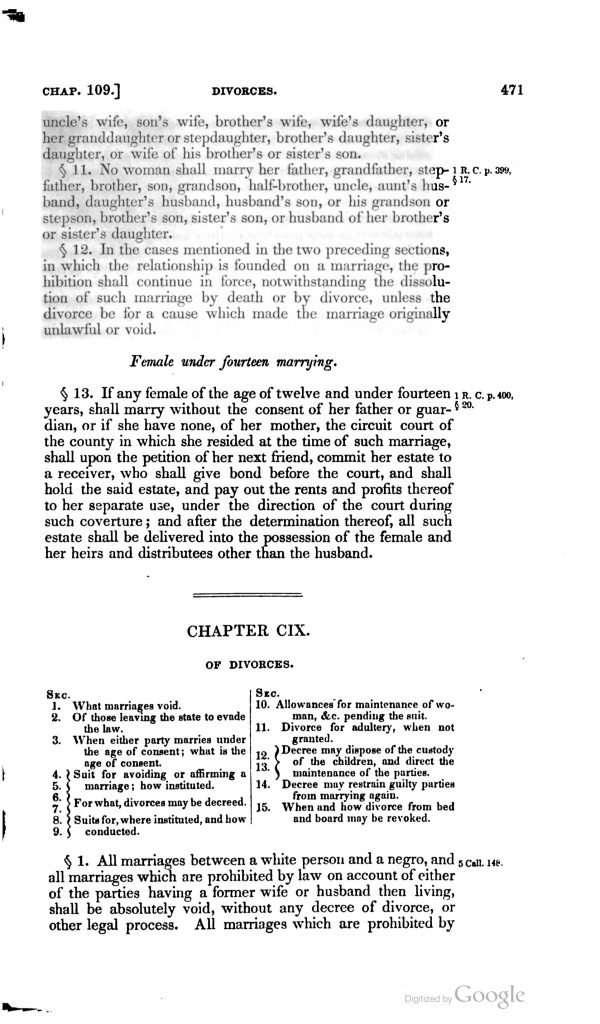 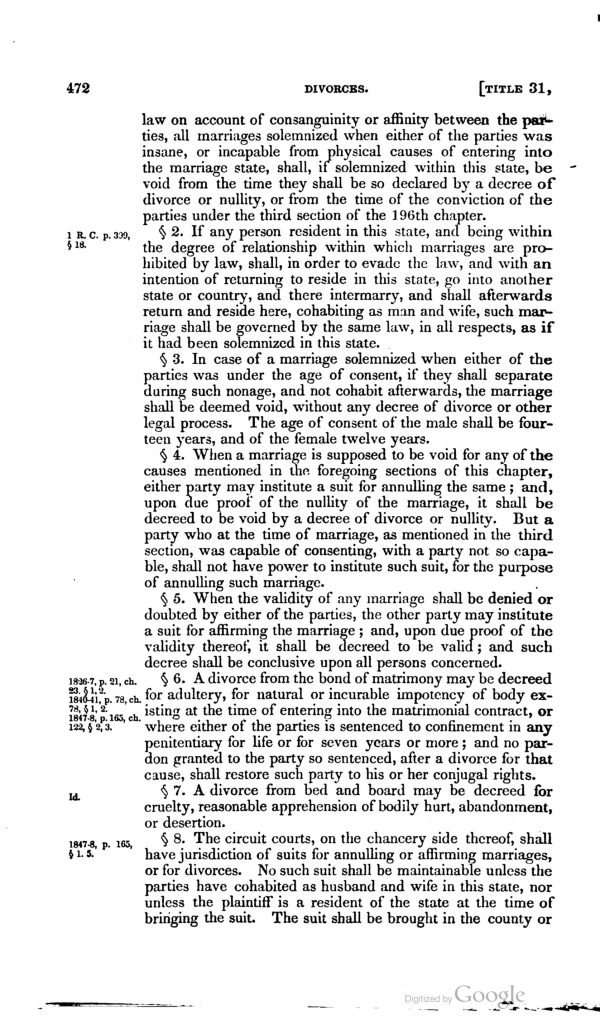 by law on account of consanguinity or affinity between the parties, all marriages solemnized when either of the parties was insane, or incapable from physical causes of entering into the marriage state, shall, if solemnized within this state, be void from the time they shall be so declared by a decree of divorce or nullity, or from the time of the conviction of the parties under the third section of the 196th chapter.

§ 2. If any person resident in this state, and being within the degree of relationship within which marriages are prohibited by law, shall, in order to evade the law, and with an intention of returning to reside in this state, go into another state or country, and there intermarry, and shall afterwards return and reside here, cohabiting as man and wife, such marriage shall be governed by the same law, in all respects, as if it had been solemnized in this state.

§ 3. In case of a marriage solemnized when either of the parties was under the age of consent, if they shall separate during such nonage, and not cohabit afterwards, the marriage shall be deemed void, without any decree of divorce or other legal process. The age of consent of the male shall be fourteen years, and of the female twelve years.

§ 4. When a marriage is supposed to be void for any of the causes mentioned in the foregoing sections of this chapter, either party may institute a suit for annulling the same; and, upon due proof of the nullity of the marriage, it shall be decreed to be void by a decree of divorce or nullity. But a party who at the time of marriage, as mentioned in the third section, was capable of consenting, with a party not so capable, shall not have power to institute such suit, for the purpose of annulling such marriage.

§ 5. When the validity of any marriage shall be denied or doubted by either of the parties, the other party may institute a suit for affirming the marriage; and, upon due proof of the validity thereof, it shall be decreed to be valid; and such decree shall be conclusive upon all persons concerned.

§ 6. A divorce from the bond of matrimony may be decreed for adultery, for natural or incurable impotency of body existing at the time of entering into the matrimonial contract, or where either of the parties is sentenced to confinement in any penitentiary for life or for seven years or more; and no pardon granted to the party so sentenced, after a divorce for that cause, shall restore such party to his or her conjugal rights.

§ 7. A divorce from bed and board may be decreed for cruelty, reasonable apprehension of bodily hurt, abandonment, or desertion.

§ 8. The circuit courts, on the chancery side thereof, shall have jurisdiction of suits for annulling or affirming marriages, or for divorces. No such suit shall be maintainable unless the parties have cohabited as husband and wife in this state, nor unless the plaintiff is a resident of the state at the time of bringing the suit. The suit shall be brought in the county or 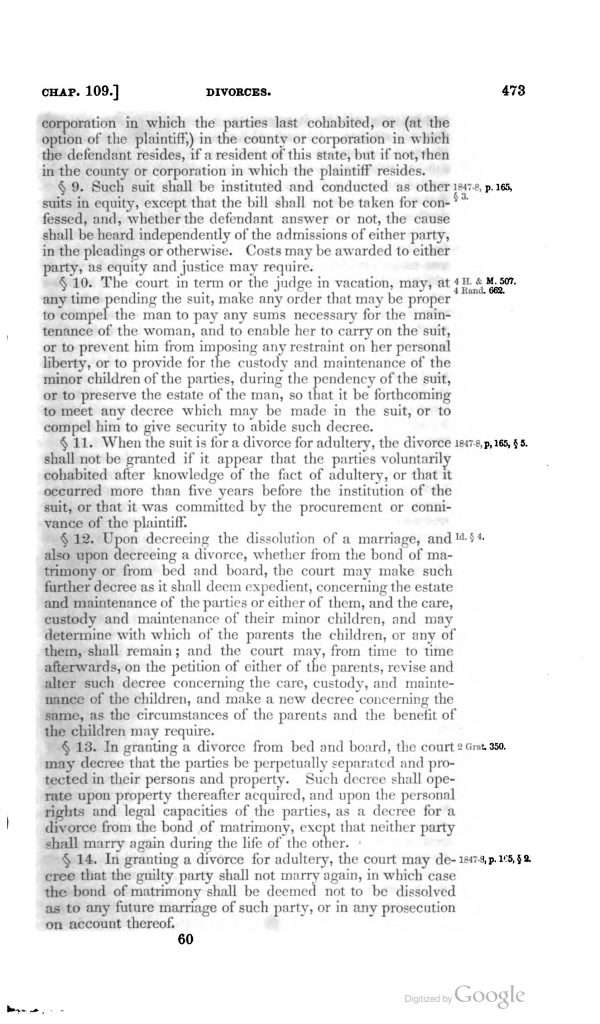 § 9. Such suit shall be instituted and conducted as other suits in equity, except that the bill shall not be taken for confessed, and, whether the defendant answer or not, the cause shall be heard independently of the admissions of either party, in the pleadings or otherwise. Costs may be awarded to either party, as equity and justice may require.

§ 10. The court in term or the judge in vacation, may, at any time pending the suit, make any order that may be proper to compel the man to pay any sums necessary for the maintenance of the woman, and to enable her to carry on the suit, or to prevent him from imposing any restraint on her personal liberty, or to provide for the custody and maintenance of the minor children of the parties, during the pendency of the suit, or to preserve the estate of the man, so that it be forthcoming to meet any decree which may be made in the suit, or to compel him to give security to abide such decree.

§ 11. When the suit is for a divorce for adultery, the divorce shall not be granted if it appear that the parties voluntarily cohabited after knowledge of the fact of adultery, or that it occurred more than five years before the institution of the suit, or that it. was committed by the procurement or connivance of the plaintiff.

§ 13. In granting a divorce from bed and board, the court may decree that the parties be perpetually separated and protected in their persons and property. Such decree shall operate upon property thereafter acquired, and upon the personal rights and legal capacities of the parties, as a decree for a divorce from the bond of matrimony, excpt that neither party shall marry again during the life of the other. 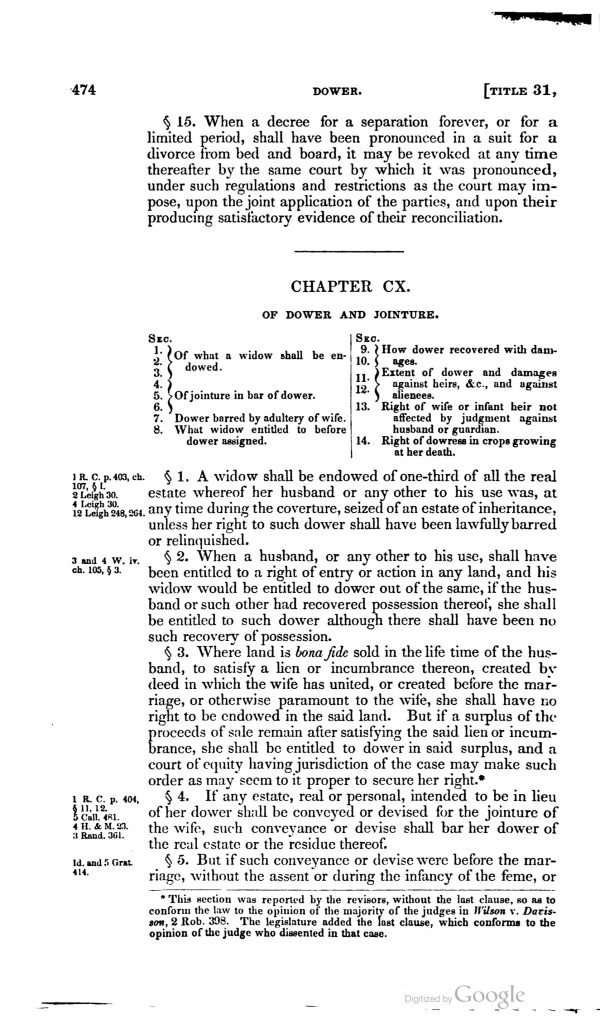 § 14. In granting a divorce for adultery, the court may decree that the guilty party shall not marry again, in which case the bond of matrimony shall be deemed not to be dissolved as to any future marriage of such party, or in any prosecution on account thereof.

§ 15. When a decree for a separation forever, or for a limited period, shall have been pronounced in a suit for a divorce from bed and board, it may be revoked at any time thereafter by the same court by which it was pronounced, under such regulations and restrictions as the court may impose, upon the joint application of the parties, and upon their producing satisfactory evidence of their reconciliation.