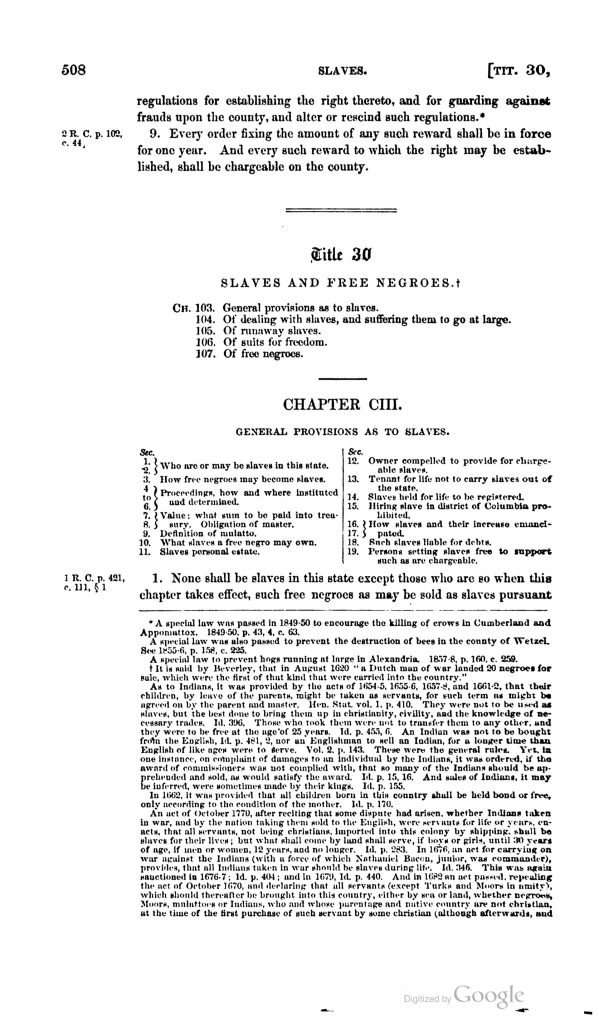 General Provisions as to Slaves.

1. None shall be slaves in this state except those who are so when this chapter takes effect, such free negroes as may be sold as slaves pursuant 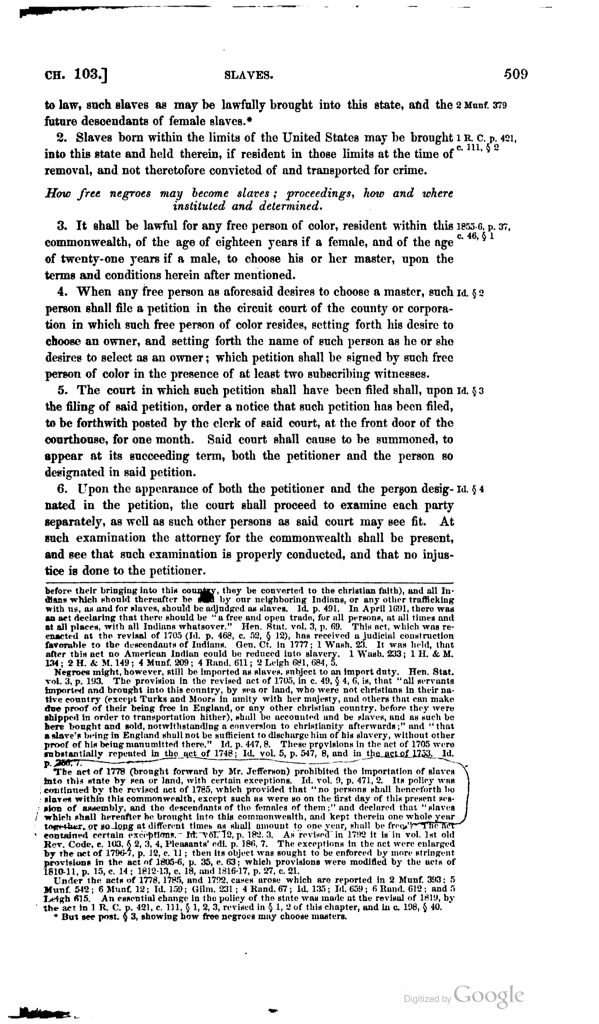 to law, such slaves as may be lawfully brought into this state, and the future descendants of female slaves.*

2. Slaves born within the limits of the United States may be brought into this state and held therein, if resident in those limits at the time of removal, and not theretofore convicted of and transported for crime.

How free negroes may become slaves; proceedings, how and where instituted and determined.

3. It shall be lawful for any free person of color, resident within this commonwealth, of the age of eighteen years if a female, and of the age of twenty-one years if a male, to choose his or her master, upon the terms and conditions herein after mentioned.

4. When any free person as aforesaid desires to choose a master, such person shall file a petition in the circuit court of the county or corporation in which such free person of color resides, setting forth his desire to choose an owner, and setting forth the name of such person as he or she desires to select as an owner; which petition shall be signed by such free person of color in the presence of at least two subscribing witnesses.

5. The court in which such petition shall have been filed shall, upon the filing of said petition, order a notice that such petition has been filed, to be forthwith posted by the clerk of said court, at the front door of the courthouse, for one month. Said court shall cause to be summoned, to appear at its succeeding term, both the petitioner and the person so designated in said petition.

6. Upon the appearance of both the petitioner and the person designated in the petition, the court shall proceed to examine each party separately, as well as such other persons as said court may see fit. At such examination the attorney for the commonwealth shall be present, and see that such examination is properly conducted, and that no injustice is done to the petitioner.

* But see post. § 3, showing how free negroes may choose masters. 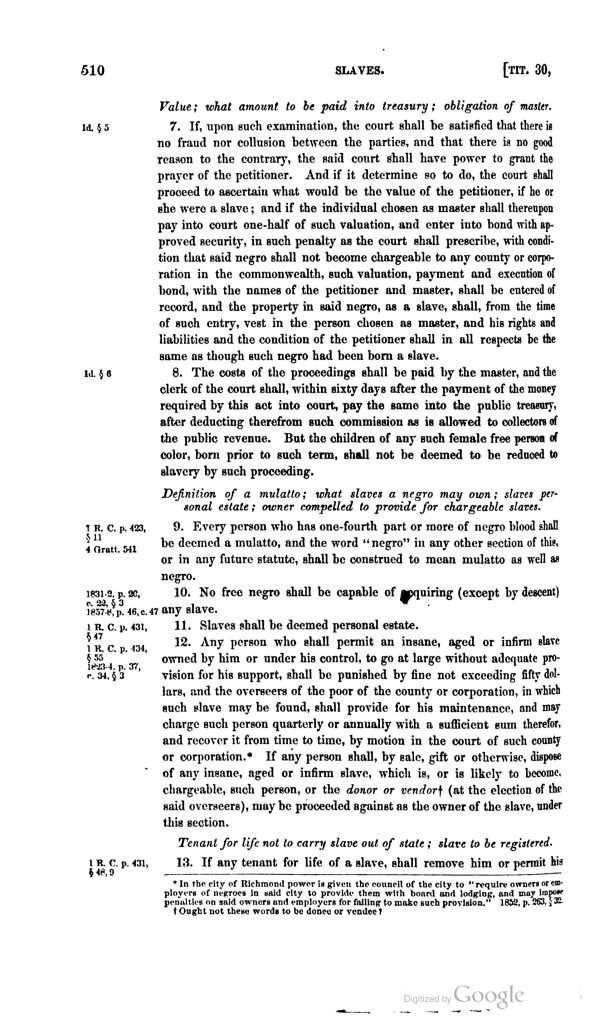 Value; what amount to be paid into treasury; obligation of master.

7. If, upon such examination, the court shall be satisfied that there is no fraud nor collusion between the parties, and that there is no good reason to the contrary, the said court shall have power to grant the prayer of the petitioner. And if it determine so to do, the court shall proceed to ascertain what would be the value of the petitioner, if he or she were a slave; and if the individual chosen as master shall thereupon pay into court one-half of such valuation, and enter into bond with approved security, in such penalty as the court shall prescribe, with condition that said negro shall not become chargeable to any county or corporation in the commonwealth, such valuation, payment and execution of bond, with the names of the petitioner and master, shall be entered of record, and the property in said negro, as a slave, shall, from the time of such entry, vest in the person chosen as master, and his rights and liabilities and the condition of the petitioner shall in all respects be the same as though such negro had been born a slave.

8. The costs of the proceedings shall be paid by the master, and the clerk of the court shall, within sixty days after the payment of the money required by this act into court, pay the same into the public treasury, after deducting therefrom such commission as is allowed to collectors of the public revenue. But the children of any such female free person of color, born prior to such term, shall not be deemed to be reduced to slavery by such proceeding.

Definition of a mulatto; what slaves a negro may own; slaves personal estate; owner compelled to provide for chargeable slaves.

9. Every person who has one-fourth part or more of negro blood shall be deemed a mulatto, and the word “negro” in any other section of this or in any future statute, shall be construed to mean mulatto as well as negro.

10. No free negro shall be capable of acquiring (except by descent) any slave.

11. Slaves shall be deemed personal estate.

12. Any person who shall permit an insane, aged, or infirm slave owned by him or under his control, to go at large without adequate provision for his support, shall be punished by fine not exceeding fifty dollars, and the overseers of the poor of the county or corporation, in which such slave may be found, shall provide for his maintenance, and may charge such person quarterly or annually with a sufficient sum therefor, and recover it from time to time, by motion in the court of such county or corporation.* If any person shall, by sale, gift or otherwise, dispose of any insane, aged or infirm slave, which is, or is likely to become chargeable, such person, or the donor or vendor† (at the election of the said overseers), may be proceeded against as the owner of the slave, under this section.

Tenant for life not to carry slave out of state; slave to be registered.

13. If any tenant for life of a slave, shall remove him or permit his

* In the city of Richmond power is given the council of the city to “require owners or employers of negroes in said city to provide them with board and lodging, and may impose penalties on said owners and employers for failing to make such provision.” 1852, p. 263 § 32.

† Ought not these words to be donor or vendee? 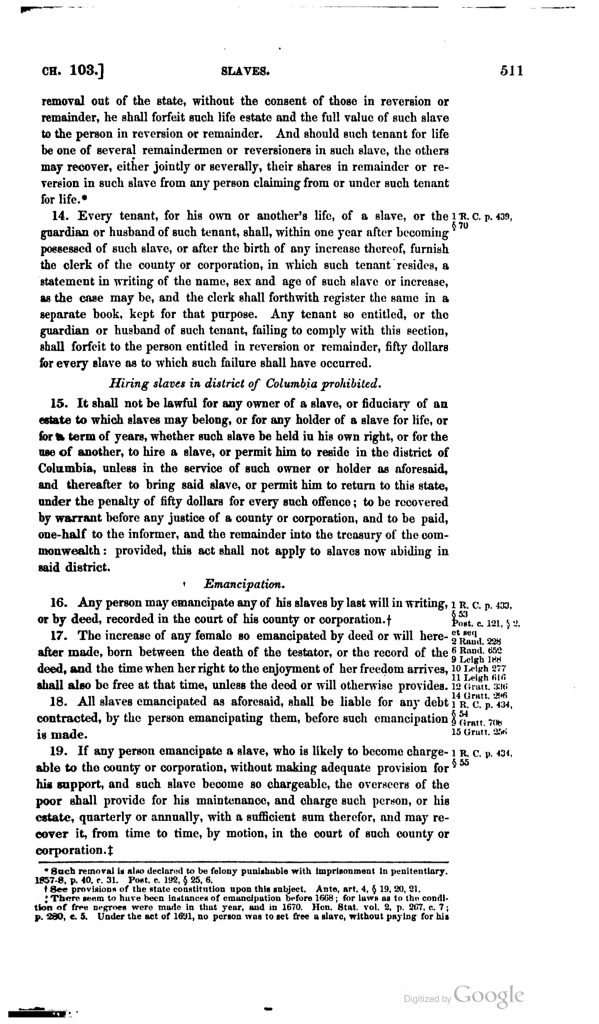 14. Every tenant, for his own or another’s life, of a slave, or the guardian or husband of such tenant, shall, within one year after becoming 70 possessed of such slave, or after the birth of any increase thereof, furnish the clerk of the county or corporation, in which such tenant resides, a statement in writing of the name, sex and age of such slave or increase, as the case may be, and the clerk shall forthwith register the same in a separate book, kept for that purpose. Any tenant so entitled, or the guardian or husband of such tenant, failing to comply with this section, shall forfeit to the person entitled in reversion or remainder, fifty dollars for every slave as to which such failure shall have occurred.

15. It shall not be lawful for any owner of a slave, or fiduciary of an estate to which slaves may belong, or for any holder of a slave for life, or for & term of years, whether such slave be held in his own right, or for the use of another, to hire a slave, or permit him to reside in the district of Columbia, unless in the service of such owner or holder as aforesaid, and thereafter to bring said slave, or permit him to return to this state, under the penalty of fifty dollars for every such offence; to be recovered by warrant before any justice of a county or corporation, and to be paid, one-half to the informer, and the remainder into the treasury of the commonwealth: provided, this act shall not apply to slaves now abiding in said district.

16. Any person may emancipate any of his slaves by last will in writing, or by deed, recorded in the court of his county or corporation.†

17. The increase of any female so emancipated by deed or will hereafter made, born between the death of the testator, or the record of the deed, and the time when her right to the enjoyment of her freedom arrives, shall also be free at that time, unless the deed or will otherwise provides.

18. All slaves emancipated as aforesaid, shall be liable for any debt contracted, by the person emancipating them, before such emancipation is made.

19. If any person emancipate a slave, who is likely to become chargeable to the county or corporation, without making adequate provision for his support, and such slave become so chargeable, the overseers of the poor shall provide for his maintenance, and charge such person, or his estate, quarterly or annually, with a sufficient sum therefor, and may recover it, from time to time, by motion, in the court of such county or corporation.‡ 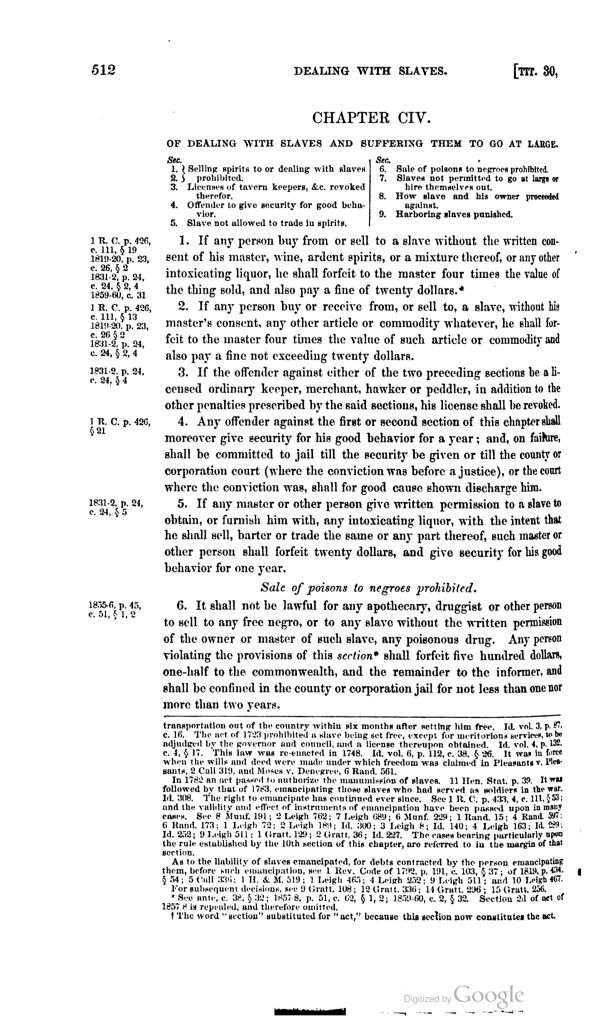