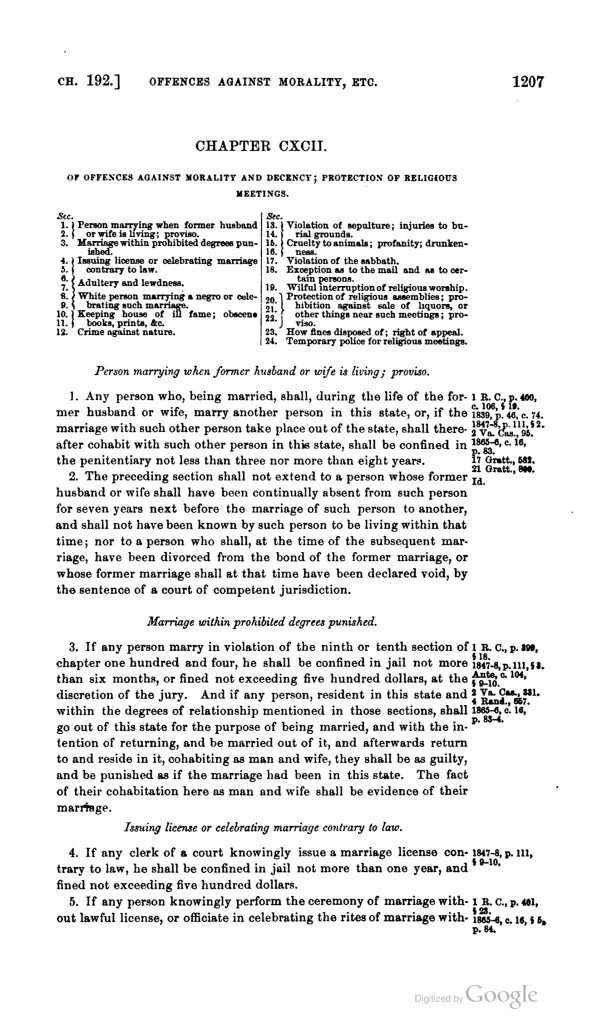 CHAPTER CXCII
Of Offences Against Morality and Decency; Protection of Religious Meetings.

Person marrying when former husband or wife is living; proviso.

3. If any person marry in violation of the ninth or tenth section of chapter one hundred and four, he shall be confined to jail not more than six months, or fined not exceeding five hundred dollars, at the discretion of the jury. And if any person, resident in this state and within the degrees of relationship mentioned in those sections, shall go out of this state for the purpose of being married, and with the intention of returning, and be married out of it, and afterwards return to and reside in it, cohabiting as man and wife, they shall be as guilty, and be punished as if the marriage had been in this state. The fact of their cohabitation here as man and wife shall be evidence of their marriage.

4. If any clerk of a court knowingly issue a marriage license contrary to law, he shall be confined in jail not more than one year, and fined not exceeding five hundred dollars. 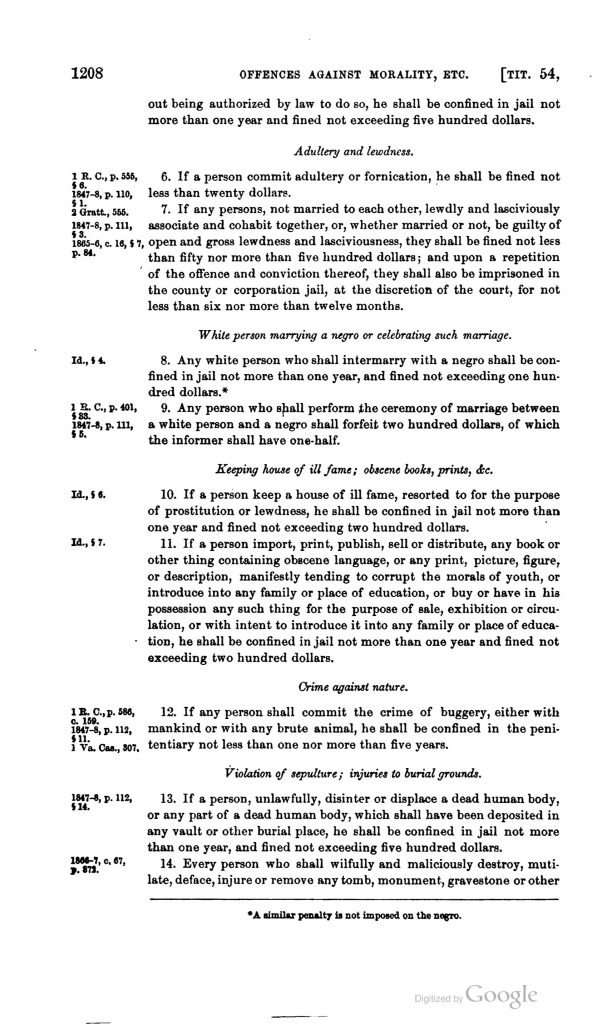 out being authorized by law to do so, he shall be confined in jail no more than one year and fined not exceeding five hundred dollars.

6. If a person commit adultery or fornication, he shall be fined not less than twenty dollars.

7. If any persons, not married to each other, lewdly and lasciviously associate and cohabit together, or, whether married or not, be guilty of open and gross lewdness and lasciviousness, they shall be fined not less than fifty nor more than five hundred dollars; and upon a repetition of the offence and conviction thereof, they shall also be imprisoned in the county or corporation jail, at the discretion of the court, for not less than six nor more than twelve months.

White person marrying a negro or celebrating such a marriage.

8. Any white person who shall intermarry with a negro shall be confined in jail not more than one year, and fined not exceeding one hundred dollars.*

9. Any person who shall perform the ceremony of marriage between a white person and a negro shall forfeit two hundred dollars, of which the informer shall have one-half.

10. If a person keep a house of ill fame, resorted to for the purpose of prostitution or lewdness, he shall be confined in jail not more than one year and fined not exceeding two hundred dollars.

11. If a person import, print, publish, sell or distribute, any book or other thing containing obscene language, or any print, picture, figure, or description, manifestly tending to corrupt the morals of youth, or introduce into any family or place of education, or buy or have in his possession any such thing for the purpose of sale, exhibition or circulation, or with intent to introduce it into any family or place of education, he shall be confined in jail not more than one year and fined not exceeding two hundred dollars.

12. If any person shall commit the crime of buggery, either with mankind or with any brute animal, he shall be confined in the penitentiary not less than one nor more than five years.

13. If a person, unlawfully, disinter or displace a dead human body, or any part of a dead human body, which shall have been deposited in any vault or other burial place, he shall be confined in jail not more than one year, and fined not exceeding five hundred dollars.

14. Every person who shall wilfully and maliciously destroy, mutilate, deface, injure or remove any tomb, monument, gravestone or other

* A similar penalty is not imposed on the negro. 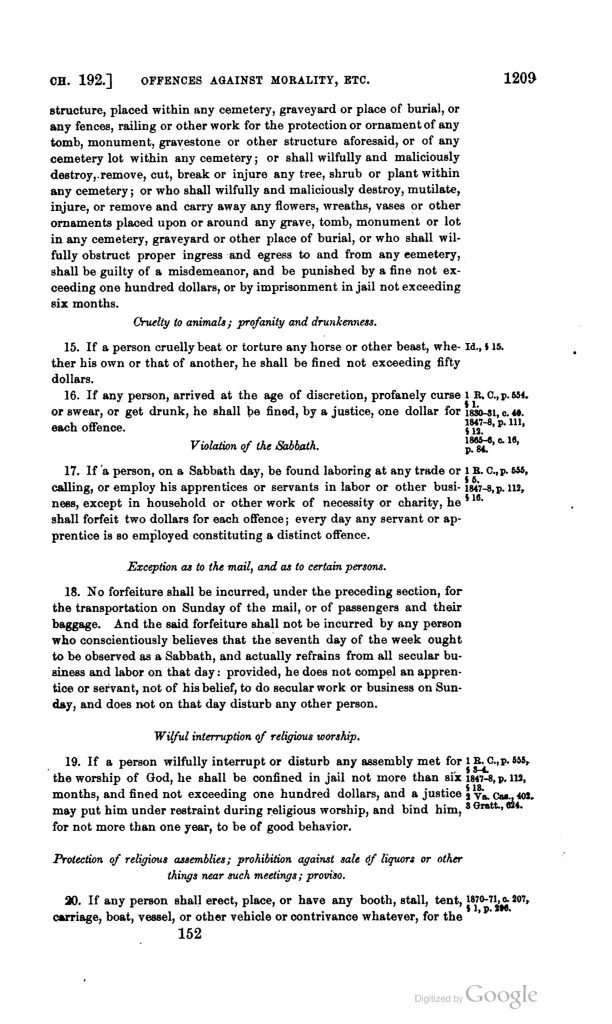 Cruelty to animals; profanity and drunkenness.

15. If a person cruelly beat or torture any horse or other beast, whether his own or that of another, he shall be fined not exceeding fifty dollars.

16. If any person arrived at the age of discretion, profanely curse of swear, or get drunk, he shall be fined, by a justice, one dollar for each offence.

Violation of the Sabbath.

17. If a person, on a Sabbath day, be found laboring at any trade or calling, or employ his apprentices or servants in labor or other business, except in household or other work of necessity or charity, he shall forfeit two dollars for each offence; every day any servant or apprentice is so employed constituting a distinct offence.

Exception as to the mail, and as to certain persons.

18. No forfeiture shall be incurred, under the preceding section, for the transportation on Sunday of the mail, or of passengers and their baggage. And the said forfeiture shall not be incurred by any person who conscientiously believes that the seventh day of the week ought to be observed as a Sabbath, and actually refrains from all secular business and labor on that day: provided, he does not compel an apprentice or servant, not of his belief, to do secular work or business on Sunday, and does not on that day disturb any other person.

19. If a person wilfully interrupt or disturb any assembly met for the worship of God, he shall be confined in jail not more than six months, and fined not exceeding one hundred dollars, and a justice may put him under restraint during religious worship, and bind him, for not more than one year, to be of good behavior.

Protection of religious assemblies; prohibition against sale of liquors or other things near such meetings; proviso.

20. If any person shall erect, place, or have any booth, stall, tent, carriage, boat, vessel, or other vehicle or contrivance whatever, for the 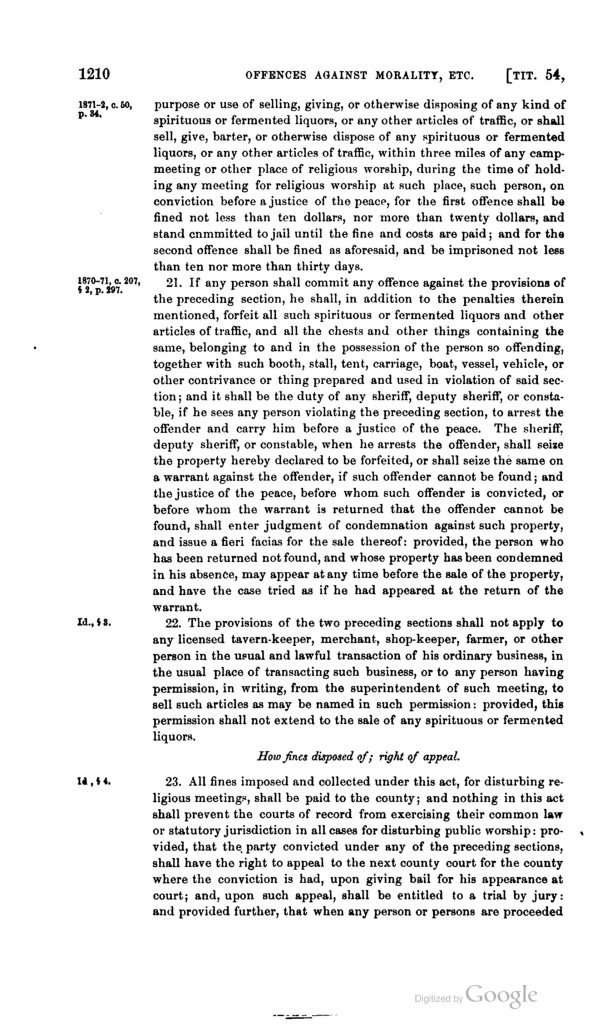 purpose or use of selling, giving, or otherwise disposing of any kind of spirituous or fermented liquors, or any other articles of traffic, or shall sell, give, barter, or otherwise dispose of any spirituous or fermented liquors, or any other articles of traffic, within three miles of any camp-meeting or other place of religious worship, during the time of holding any meeting for religious worship at such place, such person, on conviction before a justice of the peace, for the first offence shall be fined not less than ten dollars, nor more than twenty dollars, and stand committed to jail until the fine and costs are paid; and for the second offence shall be fined as aforesaid, and be imprisoned not less than ten nor more than thirty days.

21. If any person shall commit any offence against the provisions of the preceding section, he shall, in addition to the penalties therein mentioned, forfeit all such spirituous or fermented liquors and other articles of traffic, and all the chests and other things containing the same, belonging to and in the possession of the person so offending, together with such booth, stall, tent, carriage, boat, vessel, vehicle, or other contrivance or thing prepared and used in violation of said section; and it shall be the duty of any sheriff, deputy sheriff, or constable, if he sees any person violating the preceding section, to arrest the offender and carry him before a justice of the peace. The sheriff, deputy sheriff, or constable, when he arrests the offender, shall seize the property hereby declared to be forfeited, or shall seize the same on a warrant against the offender, if such offender cannot be found; and the justice of the peace, before whom such offender is convicted, or before whom the warrant is returned that the offender cannot be found, shall enter judgment of condemnation against such property, and issue a fieri facias for the sale thereof: provided, the person who has been returned not found, and whose property has been condemned in his absence, may appear at any time before the sale of the property, and have the case tried as if he had appeared at the return of the warrant.

22. The provisions of the two preceding sections shall not apply to any licensed tavern-keeper, merchant, shop-keeper, farmer, or other person in the usual and lawful transaction of his ordinary business, in the usual place of transacting such business, or to any person having permission, in writing, from the superintendent of such meeting, to sell such articles as may be named in such permission: provided, this permission shall not extend to the sale of any spirituous or fermented liquors.

How fines disposed of; right of appeal.

23. All fines imposed and collected under this act, for disturbing religious meetings, shall be paid to the county; and nothing in this act shall prevent the courts of record from exercising their common law or statutory jurisdiction in all cases for disturbing public worship: provided, that the party convicted under any of the preceding sections, shall have the right to appeal to the next county court for the county where the conviction is had, upon giving bail for his appearance at court; and, upon such appeal, shall be entitled to a trial by jury: and provided further, that when any person or persons are proceeded 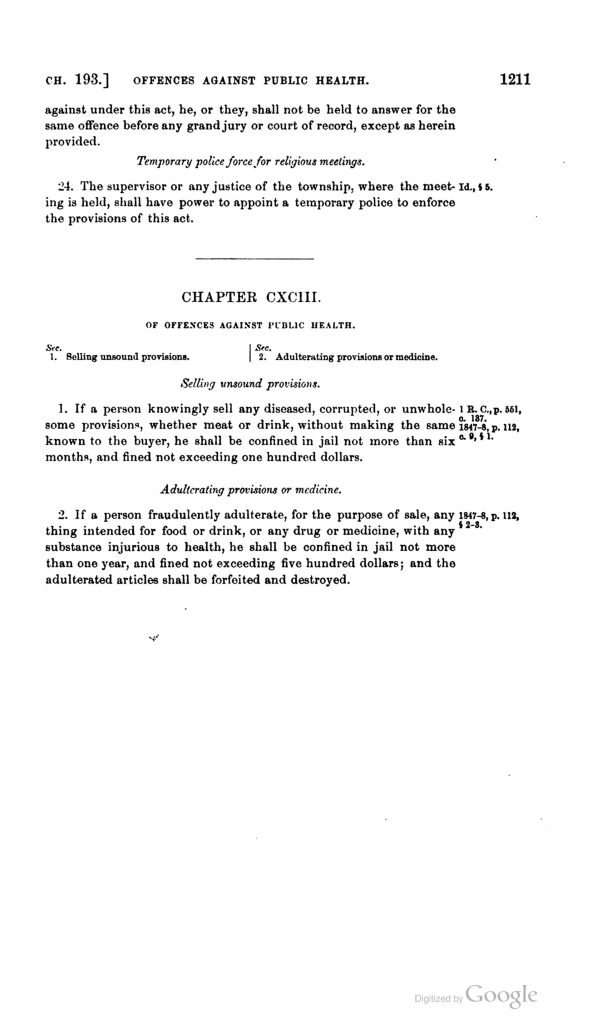 against under this act, he, or they, shall not be held to answer for the same offence before any grand jury or court of record, except as herein provided.

24. The supervisor or any justice of the township, where the meeting is held, shall have power to appoint a temporary police to enforce the provisions of this act.