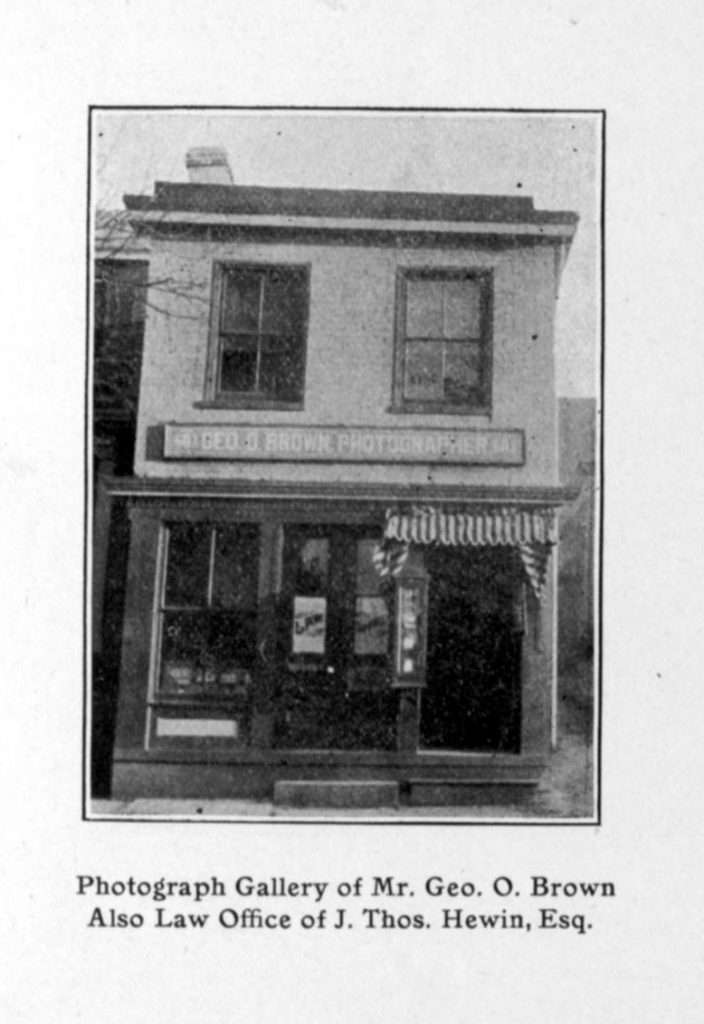 Brown was born in August 1852 in Orange County, the son of Willis Brown and Winnie Brown. According to family tradition the family was enslaved and may have changed its surname after emancipation. Sometime after the American Civil War (1861–1865) the family moved to Richmond. He was probably the George Brown who was baptized and joined Ebenezer Baptist Church on May 7, 1871. Brown opened an account at the local bank of the Freedmen’s Savings and Trust Company on March 23, 1872. The bank records identify him as working in a photographic gallery. Most likely Brown learned photography on the job at one of Richmond’s busy studios. By 1879 he was working at the photographic gallery of George W. Davis.

On July 21, 1881, Brown married Bettie G. Mason, a teacher at Navy Hill School in Richmond. They had two sons and two daughters, but two children did not survive infancy. About 1888 they moved into a house near Ebenezer Baptist Church in Jackson Ward, the center of black residential, commercial, and cultural life in Richmond. In 1895 Brown signed a three-year partnership agreement with Rebecca P. Farley to operate the Jefferson Fine Art Gallery. Farley’s husband James Conway Farley had also worked as a photographer for G. W. Davis, and he joined forces with Brown in operating the new studio. Brown had been the head photographic printer at Davis’s gallery and continued that specialty with his new partner. By 1899 Brown had opened his own studio, the Old Dominion Gallery, on East Broad Street, and in 1905 he moved his enterprise to 603 North Second Street in the heart of Jackson Ward.

Gallery of Photographs by The Browns Studio

Brown’s two children who reached adulthood, Bessie Gwendola Brown and George Willis Brown, joined the family business. The Browns, whose slogan was “Makers of Portraits That Please,” became the most important visual chroniclers of Richmond’s African American population, producing thousands of studio portraits and documenting community life at schools, sporting events, and fraternal meetings. The studio produced pictures for schools and institutions throughout the state, including Virginia Union University, Virginia Normal and Industrial Institute (later Virginia State University), Hampton Normal and Agricultural Institute (later Hampton University), Saint Paul’s Industrial School (later Saint Paul’s College) in Lawrenceville, and the Virginia Industrial School for Girls. The Richmond Planet and its successor, the Richmond Afro-American, frequently ran images by the Browns. The quality of Brown’s work brought into his studio such notable Virginians as the banker and entrepreneur Maggie Lena Mitchell Walker and the dancer and film star Bill “Bojangles” Robinson, but for the most part his images documented the everyday experience of African Americans, capturing weddings, funerals, country church congregations, and other typical scenes. The photographs are readily identifiable by the studio mark “The Browns.” In 1907 Brown won a silver medal for his photographs at the Jamestown Ter-Centennial Exposition, and the studio depicted the award in its advertisements.

George O. Brown died in Richmond on May 17, 1910. He owned a plot in Union Sycamore Cemetery, one of the Barton Heights cemeteries, and was most likely buried there. The family business that Brown founded continued to thrive for almost sixty years after his death. George Willis Brown died on May 10, 1946, but Bessie Gwendola Brown, who lived with her brother’s widow, operated the studio until 1969. Bessie Gwendola Brown died on December 28, 1977. George Willis Brown Jr. worked for a short time with his father and aunt but left after disagreements about the operation of the firm. One of his two sons, Albert Wilder Brown, worked as a photographer from 1982 until his death in 2009.

George O. Brown’s legacy and his pioneering role as a photographer are reflected in recent interest in his work. Exhibitions on African American photographers at the Smithsonian Institution and at Chicago’s DuSable Museum of African-American History have featured his photographs. Richmond’s Valentine Museum (later Valentine Richmond History Center) has also exhibited photographs and equipment from the Brown studio and owns several collections of photographs that include numerous examples of the studio’s work both before and after his death.