Samuel Ferguson Beach was born in Trumbull, Connecticut, on January 27, 1828. He was the son of John B. Beach, a Methodist minister, and Emaline Hawley Beach. He received a BA in 1846 from Wesleyan University, in Middletown, Connecticut, and was valedictorian of his class. He taught at an academy in Massachusetts before earning an MA from Wesleyan in 1849. After moving south, he taught in Prince George’s County, Maryland, and at a classical academy in Alexandria, Virginia. He soon began to study law and opened a practice in the city in 1852. Active in the local Whig Party, Beach twice won a seat on Alexandria’s common council during the 1850s, but lost a race for commonwealth’s attorney of Alexandria (later Arlington) County in 1860. On June 16, 1855, he married Elizabeth Morgan, of Alexandria. They had at least two daughters and one son.

Beach owned one adult woman and one young boy (probably her son), in 1860. His ownership of slaves did not lead him to support Virginia’s secession, however, and he remained loyal to the United States after the Civil War began. In July 1861 President Abraham Lincoln appointed him to be surveyor of customs for the Alexandria district. On October 2, Beach joined the Alexandria Union Association that had been founded late in August and after taking an oath of allegiance to the United States on that day he addressed the members “in true Union style.” He spoke to the members again on October 16, and the following week the association nominated him for the House of Representatives in the special election that the governor of the Restored government of Virginia had called for later in the month. The district consisted of the city of Alexandria and the counties of Alexandria, Culpeper, Fairfax, Fauquier, King George, Orange, Prince William, Rappahannock, Spotsylvania, and Stafford. Voters in Alexandria were the only ones in the district who voted, and they gave Beach a majority. When he petitioned to take his seat after the new Congress convened in December, the House of Representatives deemed the election invalid and refused to seat him because the governor had issued the proclamation for the election under authority of the Restored government’s convention that had met in Wheeling and not under the authority of the state’s legislature, as the U.S. Constitution required. For different reasons, the House of Representatives also did not seat Charles H. Upton, who had been elected to the seat in May 1861. 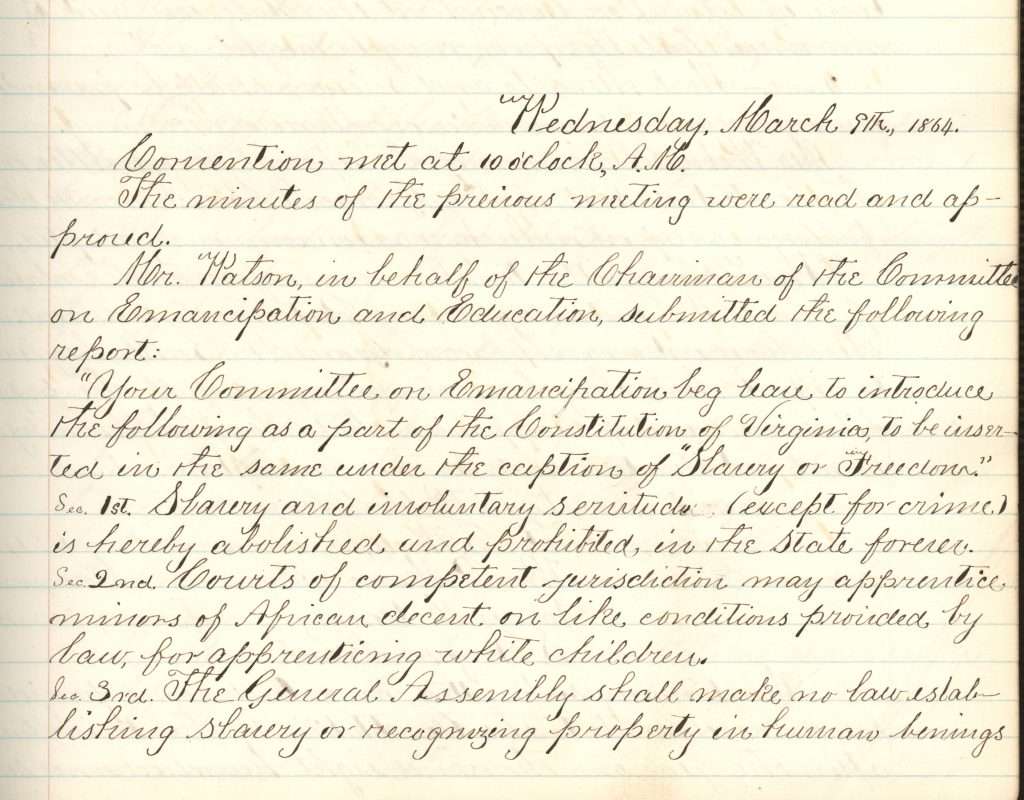 Minutes from the Constitutional Convention of 1864

In March 1863 Beach was elected to Alexandria’s board of aldermen and as the city’s corporation attorney. Two months later the Union Party nominated him for attorney general for the Restored government, but he declined to run. On January 21, 1864, Beach won election to the convention that the assembly of the Restored government called to revise the Constitution of Virginia. He was the only attorney in the seventeen-member convention and chaired the Committee on the Executive Department and the Judiciary, which proposed minimal changes to the provisions on the executive and judiciary in the Constitution of 1851. One change of consequence that the convention made was to remove from the voters, and to restore to the General Assembly, the authority to elect appellate court judges at all levels. In the convention’s most important action, Beach voted on March 10, 1864, in favor of a provision to abolish slavery in Virginia. On April 7, he voted in favor of the new constitution, but he opposed the convention’s decision to proclaim the constitution in effect without a ratification referendum. Probably for that reason, Beach did not sign the new constitution, which went into effect in the counties and cities of the Restored government on April 11, 1864. 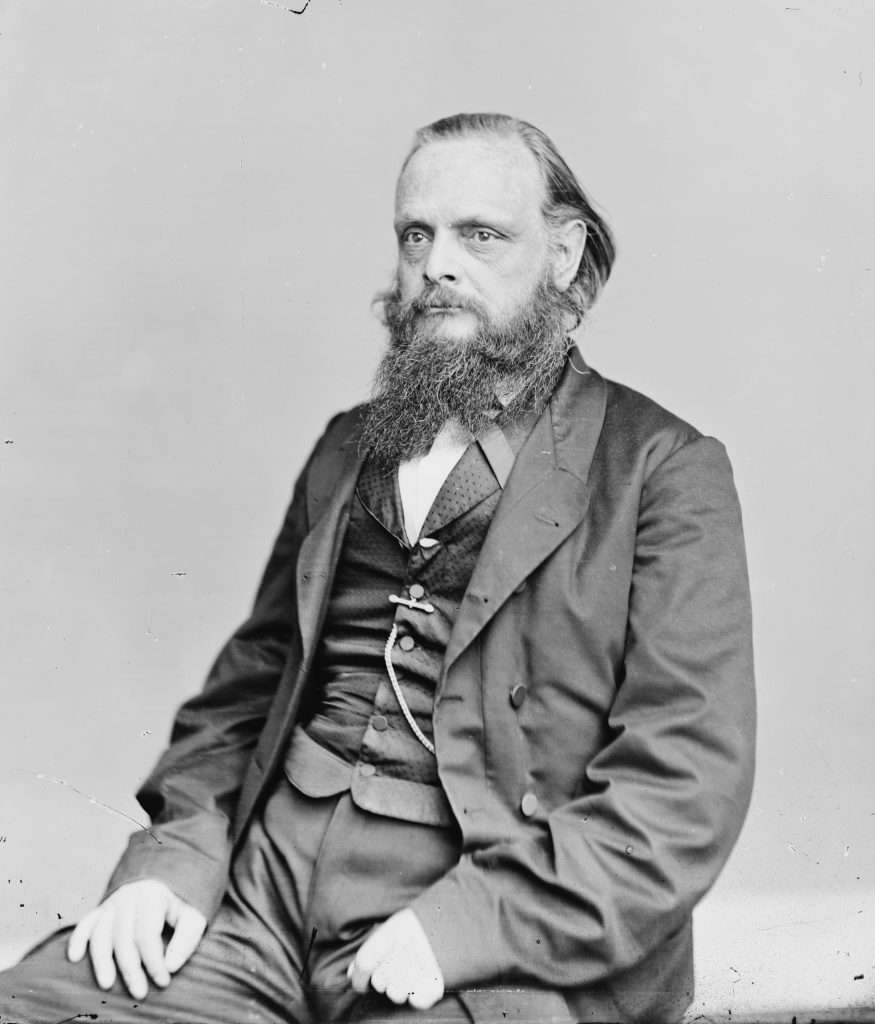 Later in 1864, Beach defended a man in a trial in the Alexandria County Court that briefly attracted widespread attention because it raised an important question about the rights of African Americans. In Israel Graff v. Richard Howard, Beach objected to the admission of testimony against his white client by an African American man from Massachusetts because, under an old Virginia law still in force in spite of slavery’s abolition in that part of the state, no African American could testify against a white man. The attorney for the other side argued that because the law of Massachusetts allowed such testimony, the denial of the man’s testimony in Virginia was a violation of his rights under the U.S. Constitution. Beach won his point on the matter of law, but the opposing counsel appealed to federal judge John C. Underwood. He refused to reverse the ruling but issued a long and impassioned opinion declaring that African Americans should have equal rights with white Americans in court. In December 1864 Beach was one of the nominees for the U.S. Senate, but the General Assembly of the Restored government elected Underwood, although he was never seated.

It is likely that Virginia’s law notwithstanding, Beach agreed with Underwood, who emerged as one of the most radical Republicans in Virginia, about the rights that freedpeople should have. In June 1865 Beach played a leading role in a meeting of the Virginia Union Association when it publicly resolved to “secure the elective franchise to our colored population, as soon as it can be safely done” in order to provide a government of Virginia by people who were and had been loyal to the United States. They and other white Virginia Unionists, most of whom like Beach became Republicans, clearly understood that without the votes of African Americans, the state’s Republicans would have few chances to win elections. In 1866 Beach also joined Henry Horatio Wells, a radical Republican native of New York then residing in Virginia, in preparing a legal memorandum denying that Congress possessed constitutional authority in 1846 to return to Virginia the city of Alexandria, which since the 1790s had been part of the District of Columbia.

Potential Jurors for the Treason Trial of Jefferson Davis

In July 1866 and again in January 1867, President Andrew Johnson reappointed Beach surveyor of customs. Johnson named him U.S. attorney for the district of Virginia in the summer of 1868. That would have made Beach the prosecutor of record for the treason trial of Jefferson Davis had the administration and the judges not decided to dismiss the case early in 1869. In that prosecution, the government had hired Wells to assist. Beach remained in office until the spring of 1870, when he resigned, and the president appointed Wells to succeed him.

Despite his association with Unionist and Republican causes, Beach aided former Confederates whose property had been seized and auctioned during the Civil War. He either served as sole counsel or as a member of the legal team in several notable cases in which the U.S. Supreme Court overturned an 1862 federal law that had required Confederates to pay taxes on their property within sixty days. He won two cases, Bennett v. Hunter (1870) and Tacey v. Irwin (1873), by arguing that proxies for the landowners had attempted to pay the taxes but that tax collectors unlawfully refused their payments. The decisions created important precedents for United States v. Lee, in which the Supreme Court ruled in 1882 that the seizure of the Lee family property at Arlington House had occurred without due process. The following year, the federal government purchased the property, the site of Arlington National Cemetery and Freedman’s Village, from George Washington Custis Lee for $150,000.

Beach maintained his active and varied law practice until 1891. He appeared in both federal and state courts, including the U.S. Supreme Court and the Virginia Supreme Court of Appeals. During the 1870s he again served a term on Alexandria’s board of alderman and was a member of the city’s school board. In addition, he was president of the First National Bank of Alexandria for more than fifteen years beginning in 1874, an active member of the American Bar Association (serving as vice president for Virginia and chair of the national Committee on Grievances in 1888–1889), and in 1890 a founding member of the Virginia State Bar Association. Beach’s wife died on January 20, 1878. Following a long illness, Beach died under medical care near Baltimore on September 15, 1893, and was buried in Ivy Hill Cemetery, in Alexandria.

Sources consulted by the Dictionary of Virginia Biography: