Wells was born on September 17, 1823, in Rochester, New York, and grew up there and in Detroit, Michigan. Available contemporary records do not clearly identify his parents. Wells graduated from an academy in Michigan, studied law, and began his practice about 1846. He married Detroit native Millicent Hunt in 1848, and they had one son and one daughter before her death on January 21, 1852. Their daughter died a few days later. By 1854 Wells had married Phoebe Elizabeth Higby and they had one daughter. He joined the new Republican Party and won election in 1854 to a term in the Michigan House of Representatives, where he allied himself with advocates of temperance, free public schools, abolition of slavery, and extending some civil and political rights to African Americans. 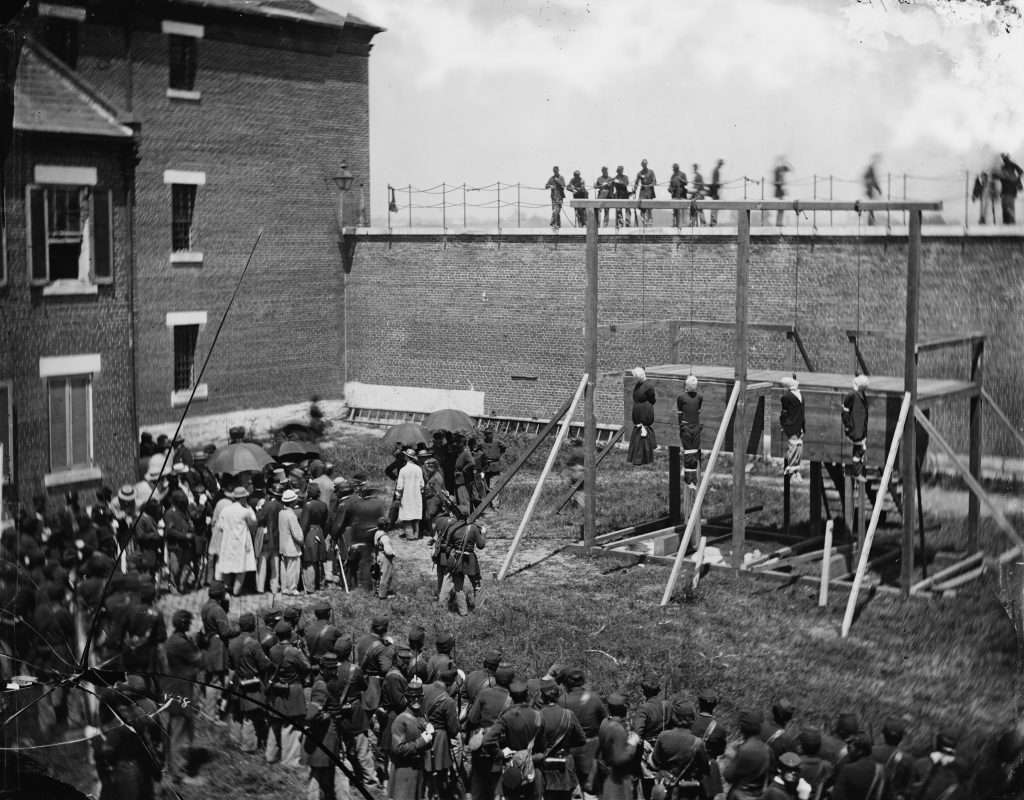 Execution of the Conspirators in Abraham Lincoln’s Assassination

During the Civil War, Wells was commissioned major in the 26th Michigan Infantry Regiment on October 4, 1862, promoted to lieutenant colonel effective five days later, and became a full colonel as of March 30, 1864. He was stationed in northern Virginia and spent most of his time in Alexandria as provost marshal. In that capacity he played an important role in the investigation of the assassination of Abraham Lincoln.

Discharged with the rank of brevet brigadier general on September 21, 1865, Wells remained in Alexandria where he and two other men leased the canal and aqueduct of the Alexandria Canal Company in 1866. They formed the Alexandria Canal, Railroad and Bridge Company and constructed a new bridge across the Potomac River into Georgetown. Wells resumed practicing law and formed professional and personal friendships with several radical Republicans in the city, most notably the attorney S. Ferguson Beach and the federal judge John C. Underwood. They advocated suffrage and full civil rights for African Americans, both as a measure of justice and as a means to increase the number of Republican voters.

Wells also adopted radical views early in Reconstruction. He published a letter to Beach in June 1865 advocating the military rule of Virginia until such time as former Confederates demonstrated by their deeds, not merely by taking oaths of allegiance, that they were loyal to the United States. In the letter Wells declared that African American men had earned the right to vote. “He has fought,” Wells wrote, “let him enjoy the fruits of victory which he helped to win; and in extending the elective franchise to him, it is done, not because he is a negro, but because he is a free native-born citizen of the United States.”

Wells became well known among the state’s Republicans and had a reputation as a moderate in spite of his spirited public advocacy of African American rights. Members of the Republican Party who served in the constitutional convention that met from December 3, 1867, to April 17, 1868, over which Underwood presided, preferred Wells to more radical Republicans such as James W. Hunnicutt in the gubernatorial election to be held under the new state constitution. With that understanding, the commanding general of the First Military District, John M. Schofield, appointed Wells provisional governor of Virginia on April 4, 1868, to succeed Francis Harrison Pierpont. Because the army supervised the state government and because the General Assembly did not meet while Wells was governor, he had limited opportunities to make changes in Virginia. He openly sided with radical members of the Republican Party, however, and ensured the appointment of George Rye, one of the Virginia party’s abolitionist founders, as state treasurer. Wells addressed the constitutional convention on April 8, 1868, and advocated full civil and voting rights for African American men, free public schools, and reforms in tax policy to shift part of the tax burden from poor Virginians to wealthier people who owned more property.

At the party’s state convention on May 6 and 7, 1868, Wells won the nomination for governor on a ticket with James H. Clements for lieutenant governor and the incumbent Unionist Republican Thomas R. Bowden for attorney general. The provisions of the state constitution disfranchising men who had taken part in the Confederacy so offended Schofield that he prevented the scheduled June 2, 1868, ratification referendum. As a result, there was no statewide election in which Wells could run for governor that year, though he remained in office under his original military appointment. 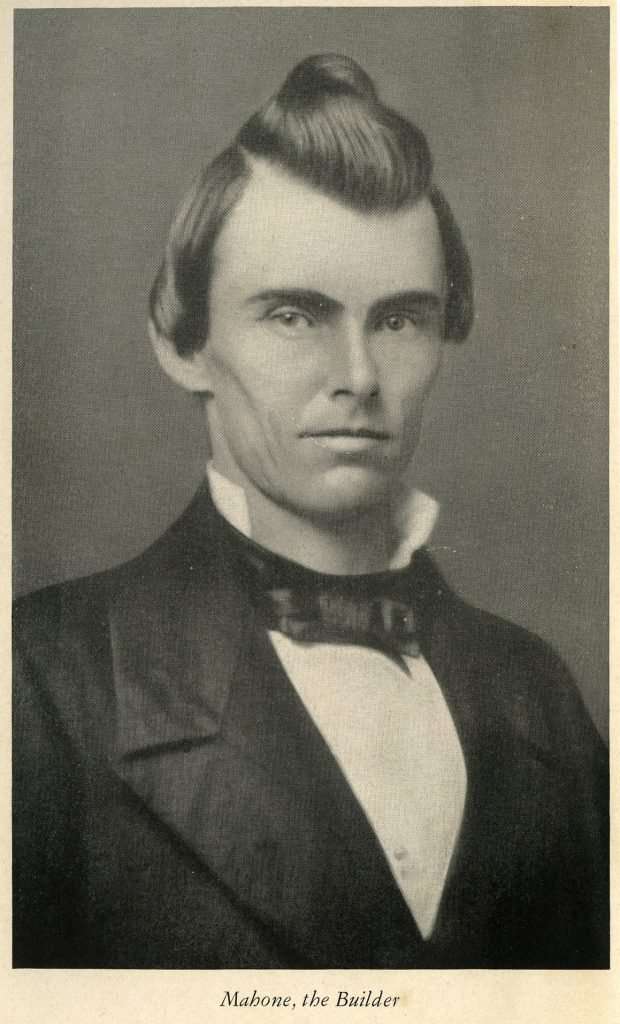 Wells alternately alienated radical and moderate Republicans by vacillating between supporting radical and moderate proposals. He adopted radical policies, but his supporters contrived to force Hunnicutt, one of the party’s most radical leaders, to cease publishing the party’s newspaper, the New Nation. As an ex officio member of the Board of Public Works, Wells antagonized some influential political leaders when he initially favored former Confederate general William Mahone‘s proposal to consolidate the three railroads that linked Norfolk, Petersburg, Lynchburg, and Tennessee lines at Goodson (later the city of Bristol) on the state border; he then antagonized Mahone and some of his powerful allies when he changed his mind. Wells also drew bad publicity by representing defendants in a whisky fraud case while he was governor.

In March 1869, when it appeared likely that voters would be able to ratify the new state constitution in July, Wells again won the Republican Party nomination for governor. The convention nominated Joseph D. Harris for lieutenant governor. An African American physician, Harris enjoyed enthusiastic support from the party’s African American members, but Wells probably realized that the presence of Harris on the ticket would unite moderate Republicans and Conservatives in opposition to his ticket. Indeed, it is possible that Republican opponents of Wells helped nominate Harris for that very purpose. In the general election on July 6, Wells and his ticket lost to a moderate Republican ticket running with Conservative support, and Gilbert C. Walker defeated Wells 119,535 to 101,204.

The commanding general in Virginia appointed Walker governor to serve until sworn in under the new constitution on January 1, 1870. Wells relinquished the office on September 21, 1869, and sought recommendations for appointment as judge of a federal circuit court, but he did not receive the appointment. As one of the attorneys in the April 1870 trial to determine whether George Chahoon or Henry K. Ellyson was the legal mayor of Richmond, Wells was badly injured when the overcrowded courtroom in the Capitol collapsed on April 27, killing about sixty people and injuring many more. Wells’s breast-bone and several ribs were broken, and for a time it was unclear whether he would recover. Shortly thereafter the president named him U.S. attorney for Virginia, and the Senate confirmed the appointment on May 28, 1870. Wells served until 1872 (after 1871 as attorney for the eastern district of Virginia), when he moved to Washington, D.C., where he resumed his law practice and served as U.S. attorney for the District of Columbia from September 1875 until January 1880. Wells continued to practice law until 1895, part of the time in partnership with his son, Henry Hunt Wells, who had been his deputy U.S. attorney for part of the time in Virginia and in Washington. The younger Wells died early in 1894.

Wells was a founding member of the American Bar Association in 1878 and its first vice president for the District of Columbia. Wells prospered and regularly vacationed in Saratoga and other fashionable resorts. He made at least one trip to the Sandwich Islands (Hawaii), perhaps at the time he accompanied a friend on a round-the-world trip. Wells’s wife died on July 20, 1893. Two years later his health failed, and he moved into the home of his daughter in Palmyra, New York. Wells died there on February 12, 1900, and was buried beside his wife in Rock Creek Cemetery in Washington, D.C.