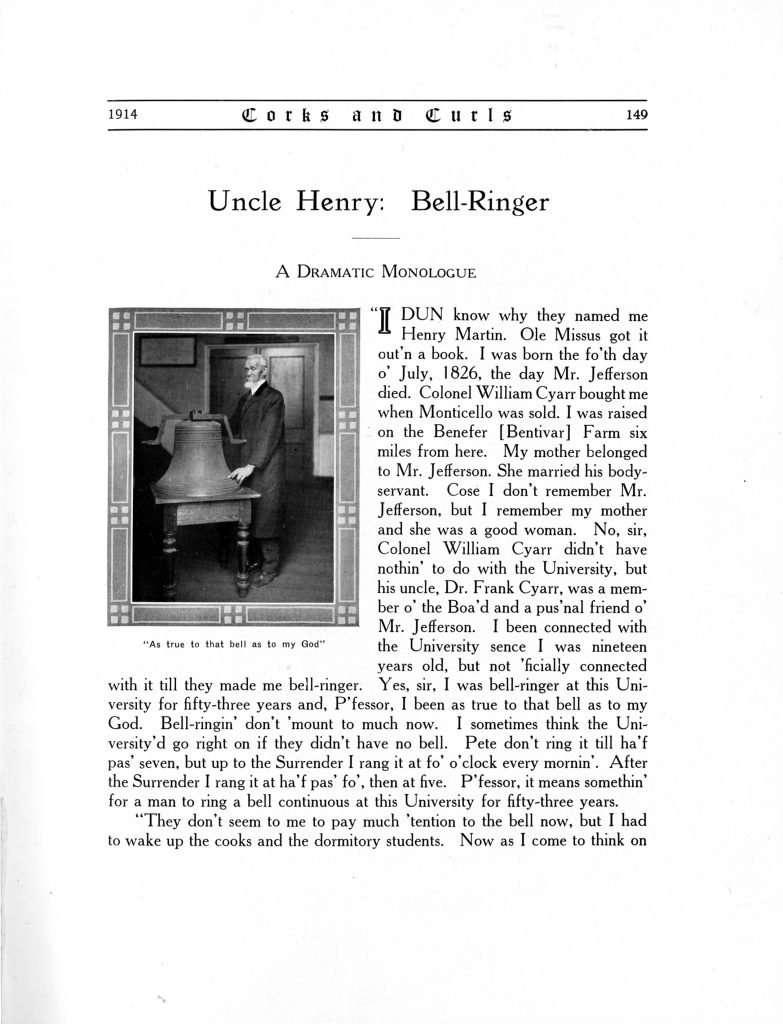 “I DUN know why they named me Henry Martin. Ole Missus got it out’n a book. I was born the fo’th day o’ July, 1826, the day Mr. Jefferson died. Colonel William Cyarr bought me when Monticello was sold. I was raised on the Benefer [Bentivar] Farm six miles from here. My mother belonged to Mr. Jefferson. She married his bodyservant. Cose I don’t remember Mr. Jefferson, but I remember my mother and she was a good woman. No, sir, Colonel William Cyarr didn’t have nothin’ to do with the University, but his uncle, Dr. Frank Cyarr, was a member o’ the Boa’d and a pus’nal friend o’ Mr. Jefferson. I been connected with the University sence I was nineteen years old, but not ‘ficially connected with it till they made me bell-ringer. Yes, sir, I was bell-ringer at this University for fifty-three years and, P’fessor, I been as true to that bell as to my God. Bell-ringin’ don’t ‘mount to much now. I sometimes think the University’d go right on if they didn’t have no bell. Pete don’t ring it till ha’f pas’ seven, but up to the Surrender I rang it at fo’ o’clock every mornin’. After the Surrender I rang it at ha’f pas’ fo’, then at five. P’fessor, it means somethin’ for a man to ring a bell continuous at this University for fifty-three years.

“They don’t seem to me to pay much ‘tention to the bell now, but I had to wake up the cooks and the dormitory students. Now as I come to think on 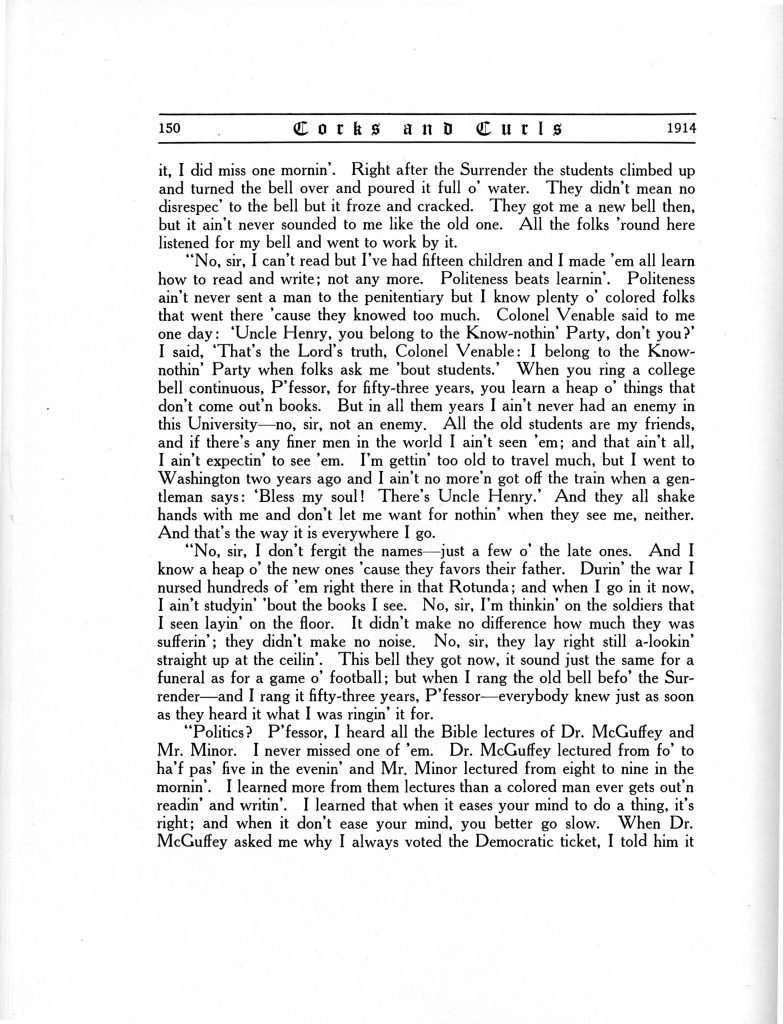 it, I did miss one mornin’. Right after the Surrender the students climbed up and turned the bell over and poured it full o’ water. They didn’t mean no disrespec’ to the bell but it froze and cracked. They got me a new bell then, but it ain’t never sounded to me like the old one. All the folks ’round here listened for my bell and went to work by it.

“No, sir, I can’t read but I’ve had fifteen children and I made ’em all learn how to read and write; not any more. Politeness beats learnin’. Politeness ain’t never sent a man to the penitentiary but I know plenty o’ colored folks that went there ’cause they knowed too much. Colonel Venable said to me one day: ‘Uncle Henry, you belong to the Know-nothin’ Party, don’t you?’ I said, ‘That’s the Lord’s truth, Colonel Venable: I belong to the Know-nothin’ Party when folks ask me ’bout students.’ When you ring a college bell continuous, P’fessor, for fifty-three years, you learn a heap o’things that don’t come out’n books. But in all them years I ain’t never had an enemy in this University–no, sir, not an enemy. All the old students are my friends, and if there’s any finer men in the world I ain’t seen ’em; and that ain’t all, I ain’t expectin’ to see ’em. I’m gettin’ too old to travel much, but I went to Washington two years ago and I ain’t no more’n got off the train when a gentleman says: ‘Bless my soul! There’s Uncle Henry.’ And they all shake hands with me and don’t let me want for nothin’ when they see me, neither. And that’s the way it is everywhere I go.

“No, sir, I don’t fergit the names–just a few o’ the late ones. And I know a heap o’ the new ones ’cause they favors their father. Durin’ the war I nursed hundreds of ’em right there in that Rotunda; and when I go in it now, I ain’t studyin’ ’bout the books I see. No, sir, I’m thinkin’ on the soldiers that I seen layin’ on the floor. It didn’t make no difference how much they was sufferin’; they didn’t make no noise. No, sir, they lay right still a-lookin’ straight up at the ceilin.’ This bell they got now, it sound just the same for a funeral as for a game o’ football; but when I rang the old bell befo’ the Surrender–and I rang it fifty-three years, P’fessor–everybody knew just as soon as they heard it what I was ringin’ it for.

“Politics? P’fessor, I heard all the Bible lectures of Dr. McGuffey and Mr. Minor. I never missed one of ’em. Dr. McGuffey lectured from fo’ to ha’f pas’ five in the evenin’ and Mr. Minor lectured from eight to nine in the mornin’. I learned more from them lectures than a colored man ever gets out’n readin’ and writin’. I learned that when it eases your mind to do a thing, it’s right; and when it don’t ease your mind, you better go slow. When Dr. McGuffey asked me why I always voted the Democratic ticket, I told him it 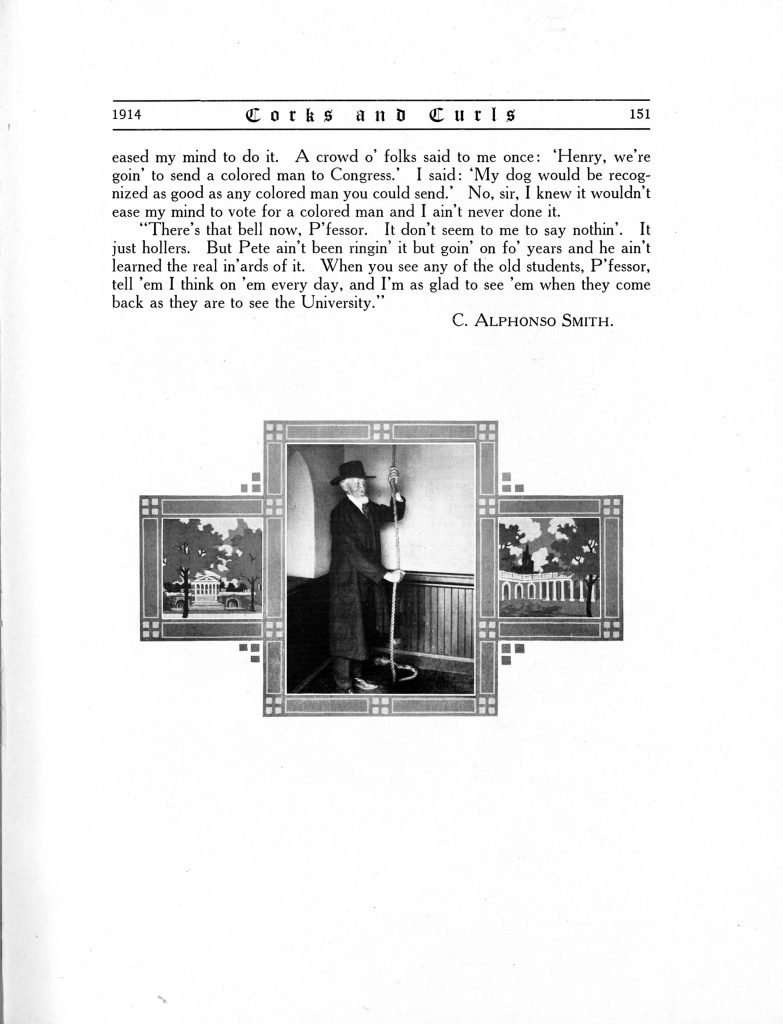 eased my mind to do it. A crowd o’ folks said to me once: ‘Henry, we’re goin’ to send a colored man to Congress.’ I said: ‘My dog would be recognized as good as any colored man you could send.’ No, sir, I knew it wouldn’t wase my mind to vote for a colored man and I ain’t never done it.

“There’s that bell now, P’fessor. It don’t seem to me to say nothin’. It just hollers. But Pete ain’t been ringin’ it but goin’ on fo’ years and he ain’t learned the real in’ards of it. When you see any of the old students, P’fessor, tell ’em I think on ’em every day, and I’m glad to see ’em when they come back as they are to see the University.”