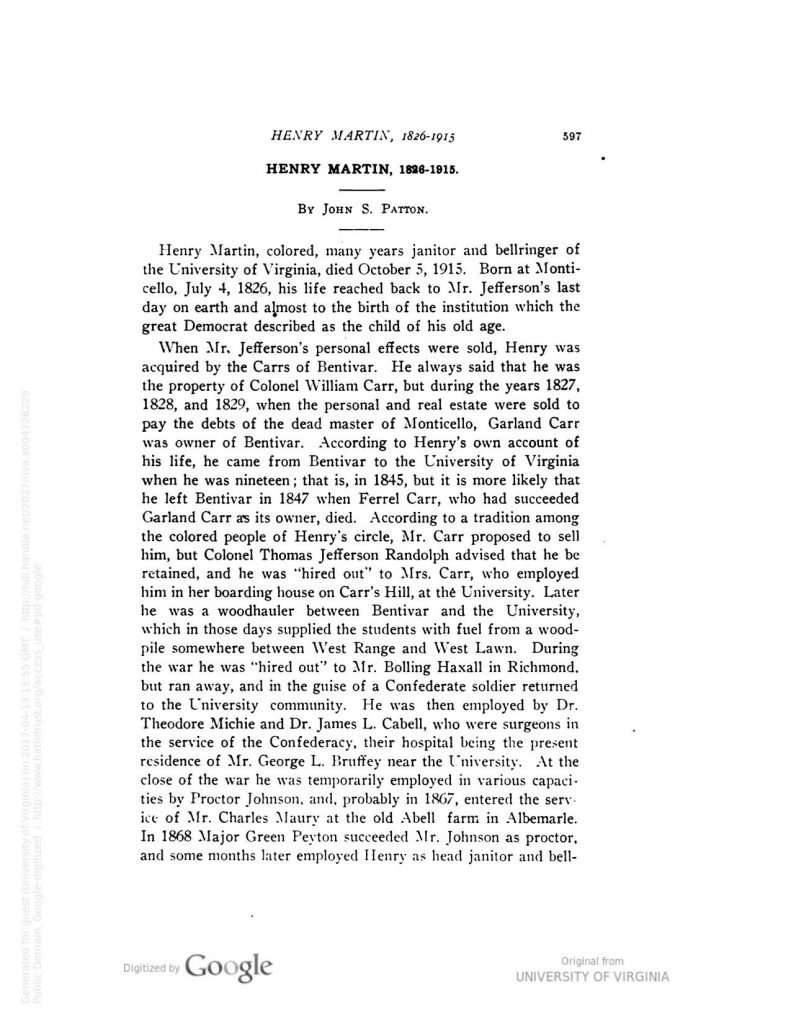 Henry Martin, colored, many years janitor and bellringer of the University of Virginia, died October 5, 1915. Born at Monticello, July 4, 1826, his life reached back to Mr. Jefferson’s last day on earth and almost to the birth of the institution which the great Democrat described as the child of his old age.

When Mr. Jefferson’s personal effects were sold, Henry was acquired by the Carrs of Bentivar. He always said that he was the property of Colonel William Carr, but during the years 1827, 1828, and 1829, when the personal and real estate were sold to pay the debts of the dead master of Monticello, Garland Carr was owner of Bentivar. According to Henry’s own account of his life, he came from Bentivar to the University of Virginia when he was nineteen; that is, in 1845, but it is more likely that he left Bentivar in 1847 when Ferrel Carr, who had succeeded Garland Carr as its owner, died. According to a tradition among the colored people of Henry’s circle, Mr. Carr proposed to sell him, but Colonel Thomas Jefferson Randolph advised that he be retained, and he was “hired out”‘ to Mrs. Carr, who employed him in her boarding house on Carr’s Hill, at the University. Later he was a woodhauler between Bentivar and the University, which in those days supplied the students with fuel from a wood pile somewhere between West Range and West Lawn. During the war he was “hired out”‘ to Mr. Bolling Haxall in Richmond, but ran away, and in the guise of a Confederate soldier returned to the University community. He was then employed by Dr. Theodore Michie and Dr. James L. Cabell, who were surgeons in the service of the Confederacy, their hospital being the present residence of Mr. George L. Bruffey near the University. At the close of the war he was temporarily employed in various capacities by Proctor Johnson, and, probably in 1867, entered the service of Mr. Charles Maury at the old Abell farm in Albemarle. In 1868 Major Green Peyton succeeded Mr. Johnson as proctor, and some months later employed Henry as head janitor and bell 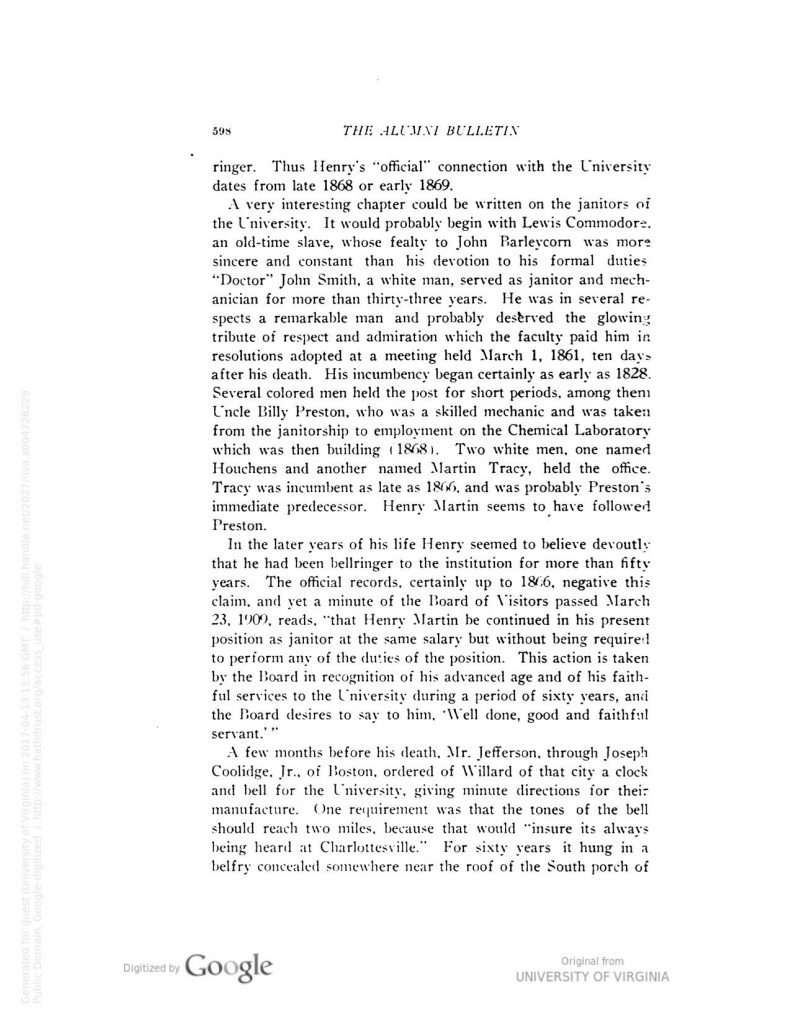 ringer. Thus Henry’s “official” connection with the University dates from late 1868 or early 1869.

A very interesting chapter could be written on the janitors of the University. It would probably begin with Lewis Commodore, an old-time slave, whose fealty to John Barleycorn was more sincere and constant than his devotion to his formal duties. “Doctor” John Smith, a white man, served as janitor and mechanician for more than thirty-three years. He was in several respects a remarkable man and probably deserved the glowing tribute of respect and admiration which the faculty paid him in resolutions adopted at a meeting held March 1, 1861, ten days after his death. His incumbency began certainly as early as 1828. Several colored men held the post for short periods, among them Uncle Billy Preston, who was a skilled mechanic and was taken from the janitorship to employment on the Chemical Laboratory which was then building (1868). Two white men, one named Houchens and another named Martin Tracy, held the office. Tracy was incumbent as late as 1866, and was probably Preston’s immediate predecessor. Henry Martin seems to have followed Preston.

In the later years of his life Henry seemed to believe devoutly that he had been bellringer to the institution for more than fifty years. The official records, certainly up to 1866, negative this claim, and yet a minute of the Board of Visitors passed March 23, 1909, reads, “that Henry Martin be continued in his present position as janitor at the same salary but without being required to perform any of the duties of the position. This action is taken by the Board in recognition of his advanced age and of his faithful services to the University during a period of sixty years, and the Board desires to say to him, “Well done, good and faithful servant.'”

A few months before his death, Mr. Jefferson, through Joseph Coolidge, Jr., of Boston, ordered of Willard of that city a clock and bell for the University, giving minute directions for their manufacture. One requirement was that the tones of the bell should reach two miles, because that would “insure its always being heard at Charlottesville.” For sixty years it hung in a belfry concealed somewhere near the roof of the South porch of 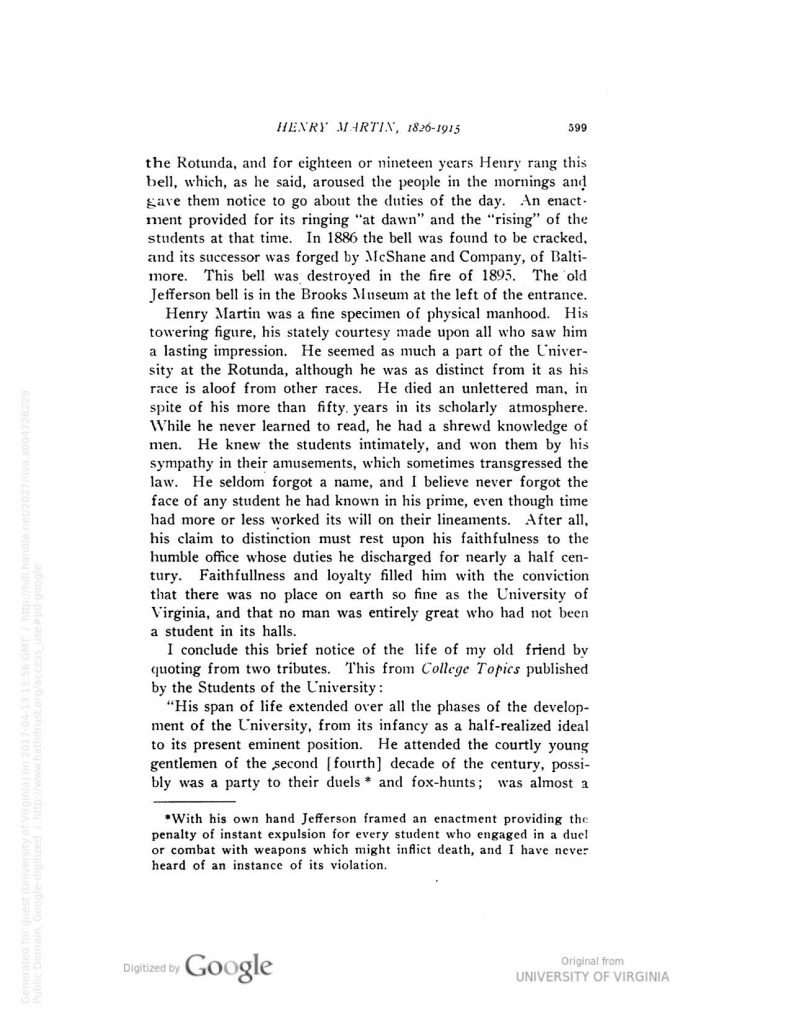 the Rotunda, and for eighteen or nineteen years Henry rang this bell, which, as he said, aroused the people in the mornings and gave them notice to go about the duties of the day. An enactment provided for its ringing “at dawn” and the “rising” of the students at that time. In 1886 the bell was found to be cracked, and its successor was forged by McShane and Company, of Baltimore. This bell was destroyed in the fire of 1895. The old Jefferson bell is in the Brooks Museum at the left of the entrance.

Henry Martin was a fine specimen of physical manhood. His towering figure, his stately courtesy made upon all who saw him a lasting impression. He seemed as much a part of the University at the Rotunda, although he was as distinct from it as his race is aloof from other races. He died an unlettered man, in spite of his more than fifty years in its scholarly atmosphere. While he never learned to read, he had a shrewd knowledge of men. He knew the students intimately, and won them by his sympathy in their amusements, which sometimes transgressed the law. He seldom forgot a name, and I believe never forgot the face of any student he had known in his prime, even though time had more or less worked its will on their lineaments. After all, his claim to distinction must rest upon his faithfulness to the humble office whose duties he discharged for nearly a half century. Faith fullness and loyalty filled him with the conviction that there was no place on earth so fine as the University of Virginia, and that no man was entirely great who had not been a student in its halls.

I conclude this brief notice of the life of my old friend by quoting from two tributes. This from College Topics published by the Students of the University:

“His span of life extended over all the phases of the development of the University, from its infancy as a half-realized ideal to its present eminent position. He attended the courtly young gentlemen of the second [fourth] decade of the century, possibly was a party to their duels * and fox-hunts; was almost

*With his own hand Jefferson framed an enactment providing the penalty of instant expulsion for every student who engaged in a duel or combat with weapons which might inflict death, and I have never heard of an instance of its violation 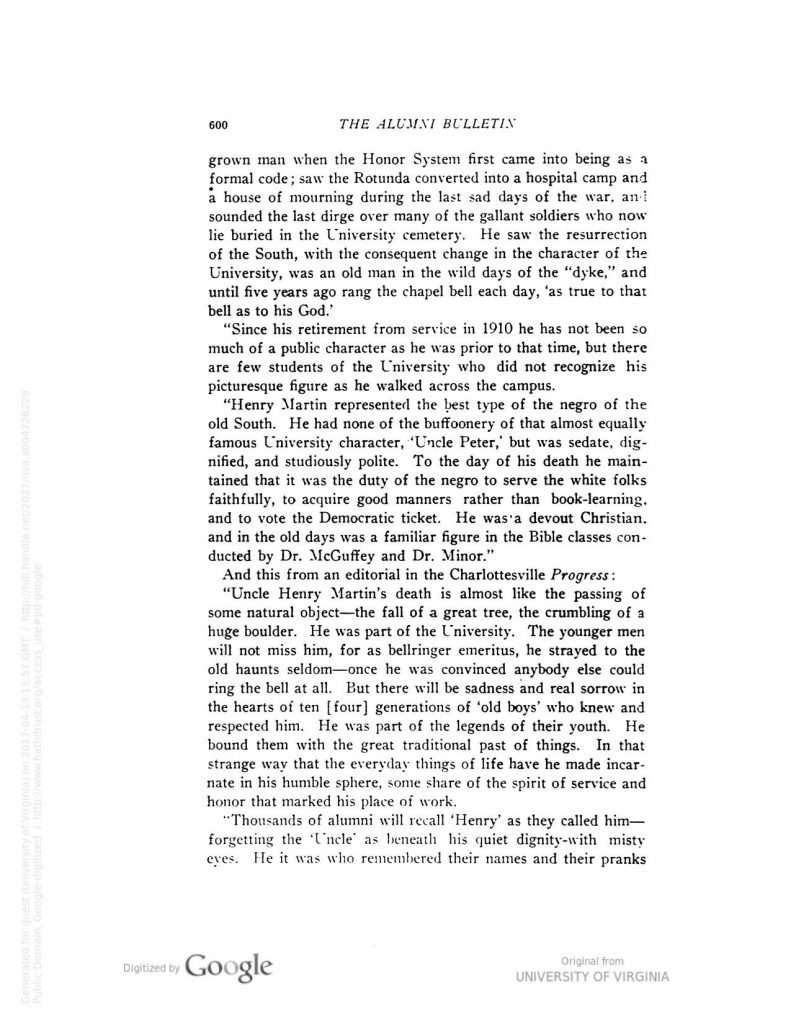 grown man when the Honor System first came into being as a formal code; saw the Rotunda converted into a hospital camp and a house of mourning during the last sad days of the war, and sounded the last dirge over many of the gallant soldiers who now lie buried in the University cemetery. He saw the resurrection of the South, with the consequent change in the character of the University, was an old man in the wild days of the “dyke,” and until five years ago rang the chapel bell each day, ‘as true to that bell as to his God.’

“Since his retirement from service in 1910 he has not been so much of a public character as he was prior to that time, but there are few students of the University who did not recognize his picturesque figure as he walked across the campus.

“Henry Martin represented the best type of the negro of the old South. He had none of the buffoonery of that almost equally famous University character, ‘Uncle Peter,’ but was sedate, dignified, and studiously polite. To the day of his death he maintained that it was the duty of the negro to serve the white folks faithfully, to acquire good manners rather than book-learning, and to vote the Democratic ticket. He was a devout Christian, and in the old days was a familiar figure in the Bible classes conducted by Dr. McGuffey and Dr. Minor.”

And this from an editorial in the Charlottesville Progress:

“Uncle Henry Martin’s death is almost like the passing of some natural object —the fall of a great tree, the crumbling of a huge boulder. He was part of the University. The younger men will not miss him, for as bellringer emeritus, he strayed to the old haunts seldom — once he was convinced anybody else could ring the bell at all. But there will be sadness and real sorrow in the hearts of ten [four] generations of ‘old boys’ who knew and respected him. He was part of the legends of their youth. He bound them with the great traditional past of things. In that strange way that the everyday things of life have he made incarnate in his humble sphere, some share of the spirit of service and honor that marked his place of work.

“Thousands of alumni will recall ‘Henry’ as they called him—forgetting the ‘Uncle’ as beneath his quiet dignity-with misty eyes. He it was who remembered their names and their pranks. 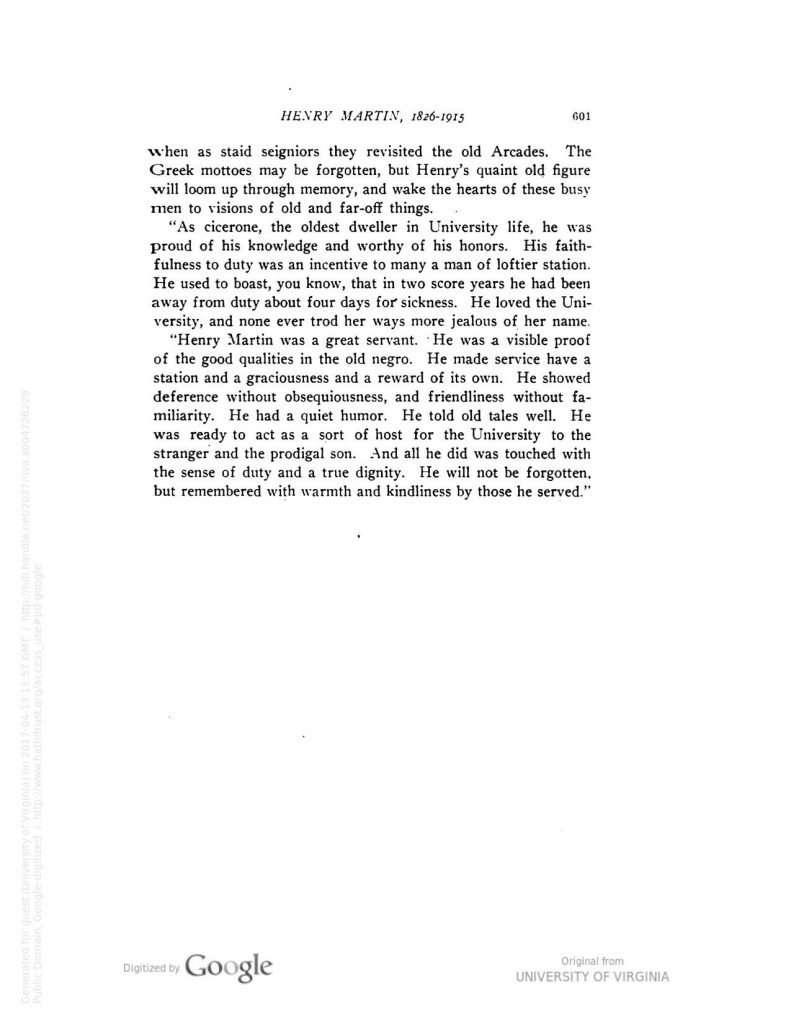 when as staid seigniors they revisited the old Arcades. The

Greek mottoes may be forgotten, but Henry’s quaint old figure will loom up through memory, and wake the hearts of these busy men to visions of old and far-off things.

“As cicerone, the oldest dweller in University life, he was proud of his knowledge and worthy of his honors. His faithfulness to duty was an incentive to many a man of loftier station. He used to boast, you know, that in two score years he had been away from duty about four days for sickness. He loved the University, and none ever trod her ways more jealous of her name.

“Henry Martin was a great servant. He was a visible proof of the good qualities in the old negro. He made service have a station and a graciousness and a reward of its own. He showed deference without obsequiousness, and friendliness without familiarity. He had a quiet humor. He told old tales well. He was ready to act as a sort of host for the University to the stranger and the prodigal son. And all he did was touched with the sense of duty and a true dignity. He will not be forgotten, but remembered with warmth and kindliness by those he served.”