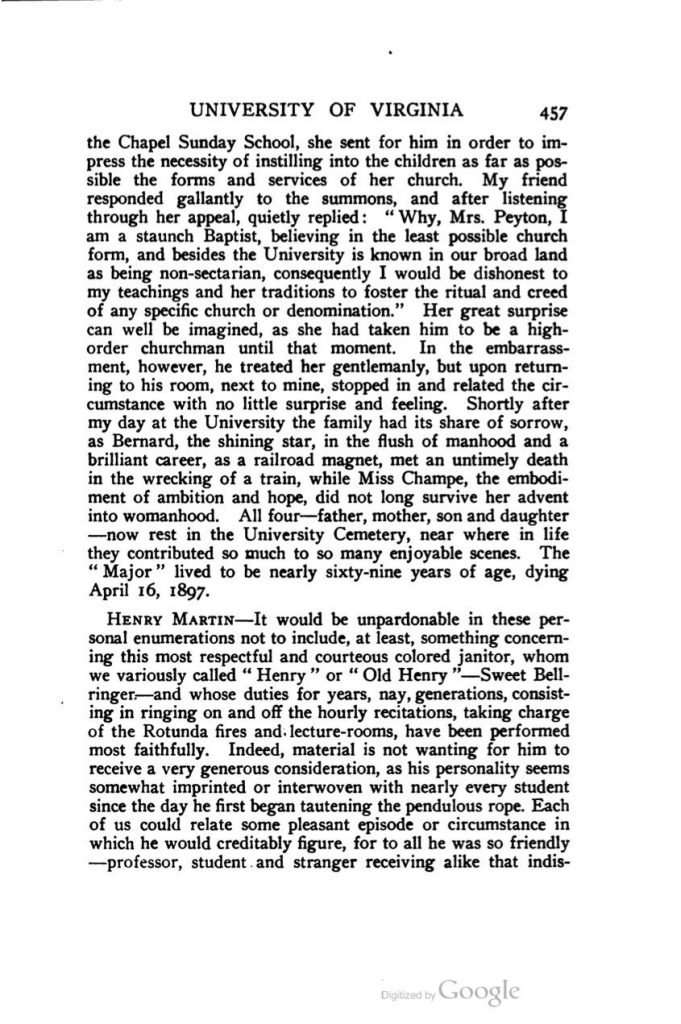 Henry Martin—It would be unpardonable in these personal enumerations not to include, at least, something concerning this most respectful and courteous colored janitor, whom we variously called “Henry” or “Old Henry”—Sweet Bellringer—and whose duties for years, nay, generations, consisting in ringing on and off the hourly recitations, taking charge of the Rotunda fires and lecture-rooms, have been performed most faithfully. Indeed, material is not wanting for him to receive a very generous consideration, as his personality seems somewhat imprinted or interwoven with nearly every student since the day he first began tautening the pendulous rope. Each of us could relate some pleasant episode or circumstance in which he would creditably figure, for to all he was so friendly—professor, student and stranger receiving alike that indis 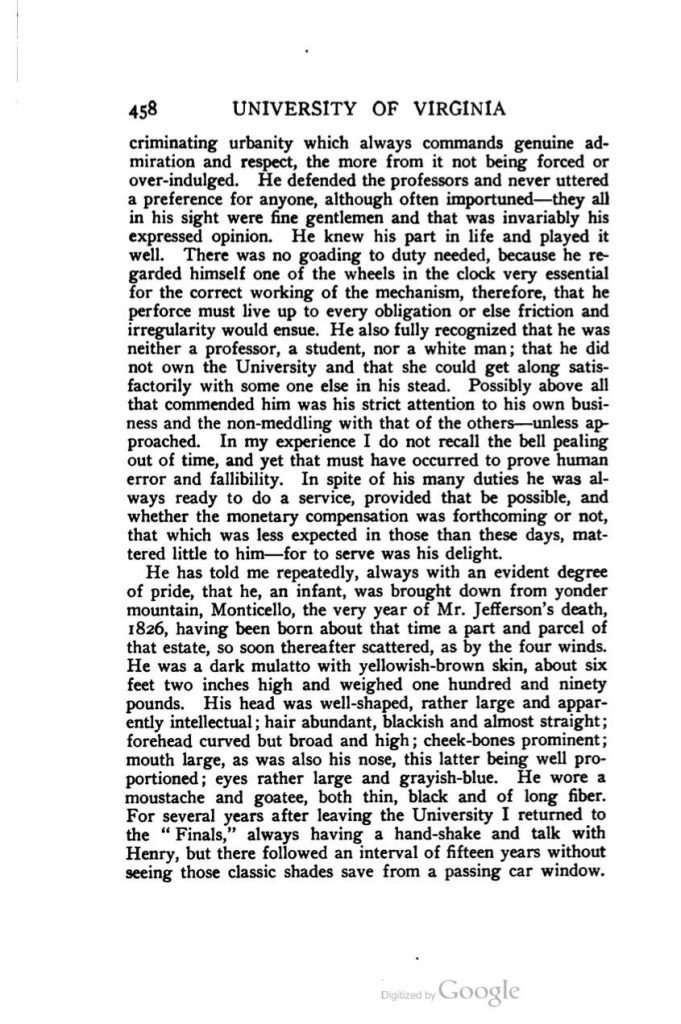 criminating urbanity which always commands genuine admiration and respect, the more from it not being forced or over-indulged. He defended the professors and never uttered a preference for anyone, although often importuned—they all in his sight were fine gentlemen and that was invariably his expressed opinion. He knew his part in life and played it well. There was no goading to duty needed, because he regarded himself one of the wheels in the clock very essential for the correct working of the mechanism, therefore, that he perforce must live up to every obligation or else friction and irregularity would ensue. He also fully recognized that he was neither a professor, a student, nor a white man; that he did not own the University and that she could get along satisfactorily with some one else in his stead. Possibly above all that commended him was his strict attention to his own business and the non-meddling with that of the others—unless approached. In my experience I do not recall the bell pealing out of time, and yet that must have occurred to prove human error and fallibility. In spite of his many duties he was always ready to do a service, provided that be possible, and whether the monetary compensation was forthcoming or not, that which was less expected in those than these days, mattered little to him–for to serve was his delight.

He has told me repeatedly, always with an evident degree of pride, that he, an infant, was brought down from yonder mountain, Monticello, the very year of Mr. Jefferson’s death, 1826, having been born about that time a part and parcel of that estate, so soon thereafter scattered, as by the four winds. He was a dark mulatto with yellowish-brown skin, about six feet two inches high and weighed one hundred and ninety pounds. His head was well-shaped, rather large and apparently intellectual; hair abundant, blackish and almost straight; forehead curved but broad and high; cheek-bones prominent; mouth large, as was also his nose, this latter being well proportioned; eyes rather large and grayish-blue. He wore a moustache and goatee, both thin, black and of long fiber. For several years after leaving the University I returned to the “Finals,” always having a hand-shake and talk with Henry, but there followed an interval of fifteen years without seeing those classic shades save from a passing car window. 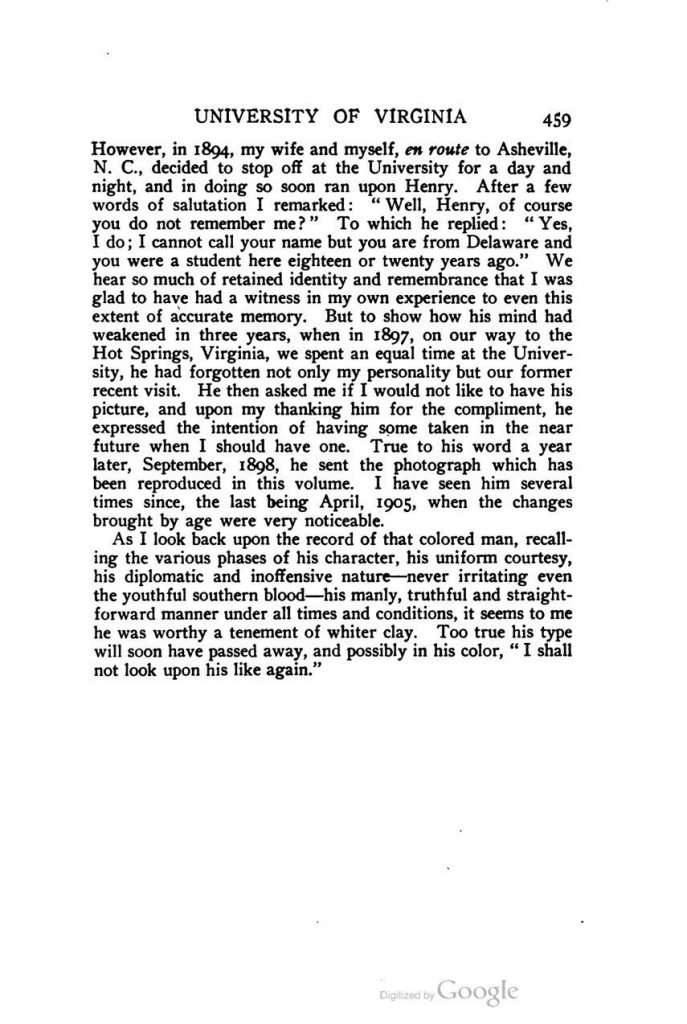 However, in 1894, my wife and myself, en route to Asheville, N.C., decided to stop off at the University for a day and night, and in doing so soon ran upon Henry. After a few words of salutation I remarked: “Well, Henry, of course you do not remember me?” To which he replied: “Yes, I do; I cannot call your name but you are from Delaware and you were a student here eighteen or twenty years ago.” We hear so much of retained identity and remembrance that I was glad to have had a witness in my own experience to even this extent of accurate memory. But to show how his mind had weakened in three years, when in 1897, on our way to the Hot Springs, Virginia, we spent an equal time at the University, he had forgotten not only my personality but our former recent visit. He then asked me if I would not like to have his picture, and upon my thanking him for the compliment, he expressed the intention of having some taken in the near future when I should have one. True to his word a year later, September, 1898, he sent the photograph which has been reproduced in this volume. I have seen him several times since, the last being April, 1905, when the changes brought by age were very noticeable.

As I look back upon the record of that colored man, recalling the various phases of his character, his uniform courtesy, his diplomatic and inoffensive nature—never irritating even the youthful southern blood—his manly, truthful and straightforward manner under all times and conditions, it seems to me he was worthy a tenement of whiter clay. Too true his type will soon have passed away, and possibly in his color, “I shall not look upon his like again.”