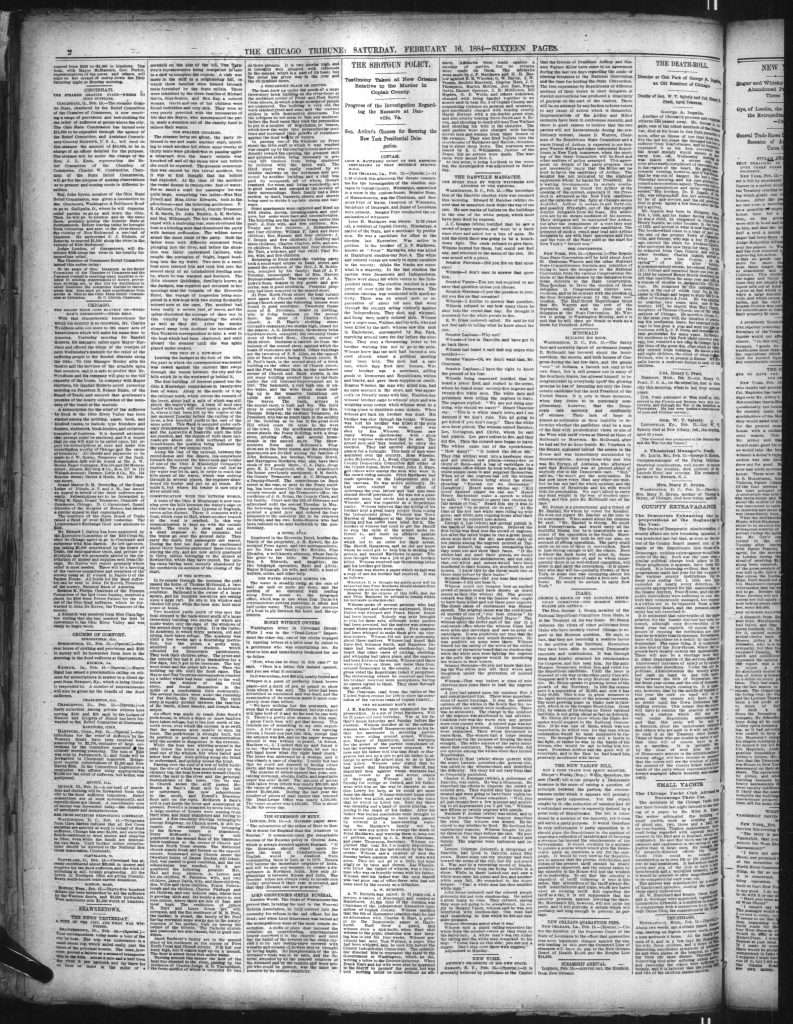 ONE STORY TOLD BY WHITE WITNESSES AND ANOTHER BY THE NEGROES.

Washington, D. C., Feb. 15.—The investigation of the Danville election riots was resumed this morning. Edward M. Hatcher (white) denied that he assaulted Jack Rudd the day of the riot. He saw marks of bullets on the buildings in the rear of the white people, which must have been fired by negroes.

J. C. Reagan (white) testified that he saw a crowd of angry negroes, and went to a hardware store and asked for a box of axes. He told the clerk there was going to be a knock-down fight. The clerk refused to give them. Witnesses hunted for them, but could not fine any, and returned to the scene of the riot. He was armed with a pistol.

Senator [John] Sherman [Republican of Ohio]—Did you fire on that occasion?

Senator [Zebulon] Vance [Democrat of North Carolina]—You are not required to answer that question unless you choose.

Senator Sherman—I put the question to you: did you fire on that occasion?

Witness—I decline to answer that question.

Witness refused to say how many times he shot into the crowd that day. He thought it was necessary for the white people to fire.

R. W. Glass (colored) called. He said he did not feel safe in telling what he knew about the riot.

Witness—I live in Danville, and have got to go back there.

Witness had heard it said that any negro who testified—

Senator Lapham—I have the right to know the ground of his fear.

Witness being reassured testified that he heard a pistol fired, and rushed to the scene, where he found some seventy-five negroes and twenty-five white men. The white men and policemen were telling the negroes to leave. The negroes replied: “We are not doing anything, why should we leave?” Heard Thatcher say: “This is a white man’s town, and I am damned if we don’t rule. You all going to get killed if you don’t leave.” Then the white men drew pistols. The witness named Hatcher, Lee, Covington, and Oliver, who he said had pistols. Lee gave orders to fire, and they did fire. Then the colored men began to leave. The whites came out of the opera-house. “How many?” “It looked like 300 or 400.” They (the whites) went into a hardware store and got pistols; saw pistols—twenty-five or thirty of them—and a bag of cartridges in a real-estate office where he took refuge, and the white people came in and supplied themselves. When all of the negroes had left the witness heard of the whites being about the street shouting “Hurrah for we Democrats!” [Laughter.] Heard some whites say: “Kill every damned nigger we can see.” Heard Henry Barkesdale make a speech in which he said: “We intend to carry this election by fair means or foul.” Heard him say it was to be carried “by de point ob de gun.” At the time of the riot saw white men riding up with guns; saw white men running home after their guns; saw no colored men armed.

George A. Lee (white) saw several pistols in the hands of the colored people. Believed the first volley was fired into the crowd of negroes, but after the latter began to run a great many shots were fired in the air; saw some eight or ten pistols among the negroes pointed at Taylor and himself, the negroes demanding that they come out and show their faces. “If the whites had not used their pistols, we would have been shot into smithereens; and not only that, our wives and sisters would have been murdered in their houses, sir, murdered in our houses. I know this by the threat made two or three days before by their leader.”

Senator Sherman—Did you hear that threat?

Witness—I did not hear it.

Witness could not imagine how an excited crowd of people could have shown as much mercy as the (the whites) did. The general remark was that it was the leaders who ought to have been killed and not these poor negroes. The direct cause of excitement was [W. E.] Simms’ speech [on November 2, the night before the riot]. The original cause was the cold-blooded murder of one of “our best citizens” by “our Readjuster brindle-tailed Mayor.” The witness spent the better part of the day in a real-estate office where the witness Glass had seen arms and cartridges and saw no arms or cartridges. It was positively not true that the men went in there and armed themselves. He was positive no arms were there. Witness feared for the safety of the wives of the whites because of threats he heard that on election-day while the white men were fighting the negroes at the polls the negroes would be murdering the women in their homes.

Senator Sherman—Do you not know that during the War white men left their wives and daughters under the protection of colored men?

Witness—That was before a class of mischievous men came there to lead the negroes astray.

A jury had passed upon his conduct Nov. 3 and complimented him. There were apprehensions of secret burnings. It was the general opinion of the whites in the South that the negroes when not misled were inoffensive. There was no animosity. The change in the conduct of the negroes was attributed to bad advisers. Coalition [i.e., Readjuster] rule was the worst rule any people were ever cursed with. A colored man was not safe in being a Democrat. Colored Democrats were ostracised. Their wives threatened to leave them. The women had a lodge among themselves for the purpose of keeping the men straight. The white leaders of the party inculcated that sentiment. The same ostracism did not operate among the whites when they turned Republicans.

Charles D. Noel (white) whose quarrel with the negro [Hense] Lawson preceded the general riot, was called to the witness-chair, and described the difficulty. His story did not vary from that so frequently published.

Charles G. Freeman (white), a policeman of Danville, was called. He was a Democrat. He described the efforts to disperse the crowd of colored men. They replied they had been mistreated and were going to have their rights before they left. Witness remarked: “Well, you all just remain here a few minutes and according to all appearances you’ll get ’em.” Witness saw fifteen or twenty negroes with pistols.

Matthew P. Jordan (white) was called, and in reply to Senator Sherman’s inquiry described the riots. The witness was armed. He declined to say whether he fired. He declined for satisfactory reasons. Witness bought his pistol three or four days before the riot. He purchased it for the protection of himself and family. The negroes were turbulent and insolent.

Lemon Coleman (colored), a clergyman of Danville, had lived in Danville about fifty years. Heard some one cry murder and went toward the scene of the riot, but did not reach it. Was met by a retreating crowd of blacks, and sought safety from the flying bullets in a store. While in there looked out and saw a white man raise his pistol and fire, and another white man fall. He remarked to the storekeeper: “Dar! a white man has shot anodder white man.”

John Stone (colored) said the colored people generally did not vote election-day [November 6]. He asked a great many to vote. They refused, saying they were not going to be slaughtered. In reply to Senator Vance, witness said he was not interfered with election-day. One man had said something to him which he did not consider pleasant.

Senator Sherman asked what it was.

Witness said a plank railing separated the white from the colored voters as they went to the ballot-box. A white man’s dog ran under the railing and the white man remarked to his dog: “Come back on this side; you are not a nigger. Dan’t [sic] stay over there with niggers.”