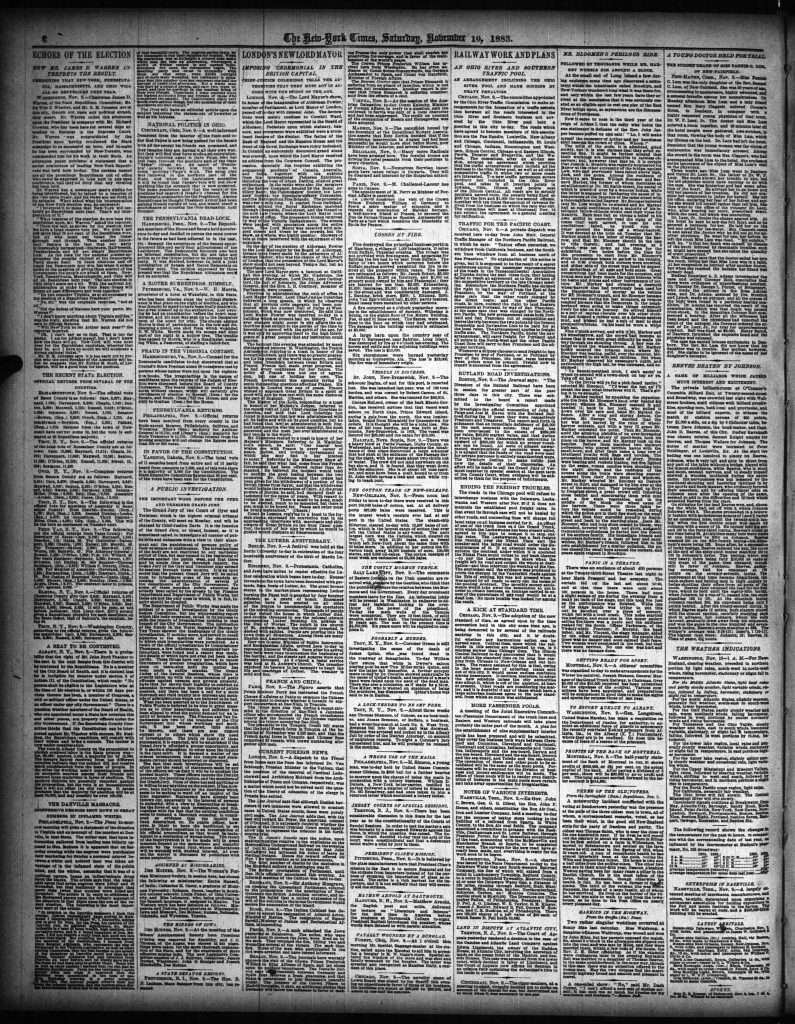 INOFFENSIVE NEGROES SHOT DOWN IN GREAT NUMBERS BY INFLAMED WHITES.

Philadelphia, Nov. 9.—The Press to-morrow morning will print a statement of the situation in Virginia and an account of the murders at Danville, in that State. The writer says that upon information gathered from leading men bitterly opposed to Gen. [William] Mahone it is apparent that on Saturday evening while the negroes were purchasing their marketing for Sunday a personal quarrel between a white and colored man was taken advantage of in the inflamed state of the public mind, and whites, assuming that it was of a political nature, began an indiscriminate firing upon the blacks. The article says that the assailants agree that seven negroes were killed and 20 wounded, but that testimony is abundant that more than twice that number were killed and wounded. The article is in reply to criticisms of the Richmond papers upon the writer’s account of the situation in that State upon the even of the recent election. The following is the most important part of the article:

“In relation to the Danville massacre I took this source: Almost immediately upon arrival in Richmond I telegraphed to Major W. T. Sutherlin, asking him to give by wire, for the Press, his opinion of the Danville riot, its political significance, &c. Major Sutherlin is a man of large wealth, high position, conservative views, and is a bitter opponent of Gen. Mahone. I did not receive a reply from him until too late to use that night. But pursuing my inquiries among the enemies of the Coalitionists [i.e., members of the biracial Readjuster Party], I learned from State Senator [Henry A.] Atkinson [Jr.], who represents the city of Richmond in the Virginia Legislature, as well as other leading Democrats, that the real facts as to the extent of the slaughter in Danville could not then be obtained. Senator Atkinson had just returned from Danville an hour before, and he kindly gave me all the facts he had been able to gather there. From him as well as other leaders I learned that the riot had no political significance. From all the testimony I could gather from this class it appeared that the murders were committed in the heat of passion, Saturday evening, in a great occasion in Danville The colored people receive their pay from from the tobacco factories, and the market-place during the afternoon of that day is an interesting feature of that beautiful town. The negroes gather there by the thousands to buy their supplies for Sunday. When the marketing was at its height a colored man and a white man got into an altercation, whereupon a crowd of whites rushed in and opened indiscriminate fire upon the defenseless negro. The assailing party and those in sympathy with them say that seven were killed outright and 20 more were wounded., but testimony is abundant that this number does not represent one-half the harvest of death that afternoon. Not a white man was hurt by a colored person, and only two were injured, and they by accident in the random firing of their own friends. These facts I state entirely upon the highest authority from the friends of those who committed the assault. The Coalitionists claim very much more serious things, but the admissions of their opponents are bad enough.”

The Press will have an editorial article upon the subject indorsing the statements of its writer as well as his fairness.