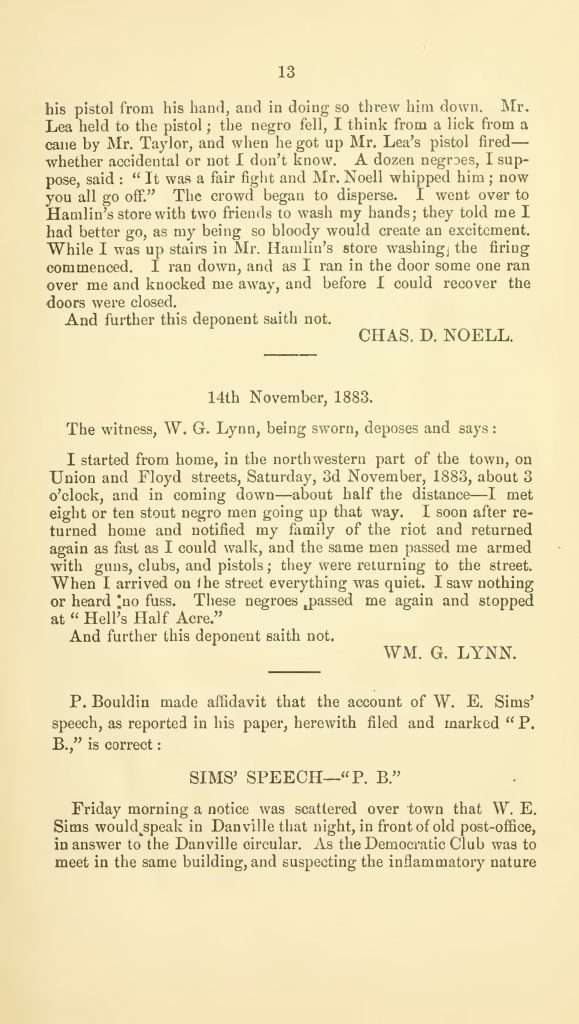 P. Bouldin made affidavit that the account of W. E. Sims’ speech, as reported in his paper, herewith filed and marked “P. B.,” is correct:

Friday morning a notice was scattered over town that W. E. Sims would speak in Danville that night, in front of old post-office, in answer to the Danville circular. As the Democratic Club was to meet in the same building, and suspecting the inflammatory nature 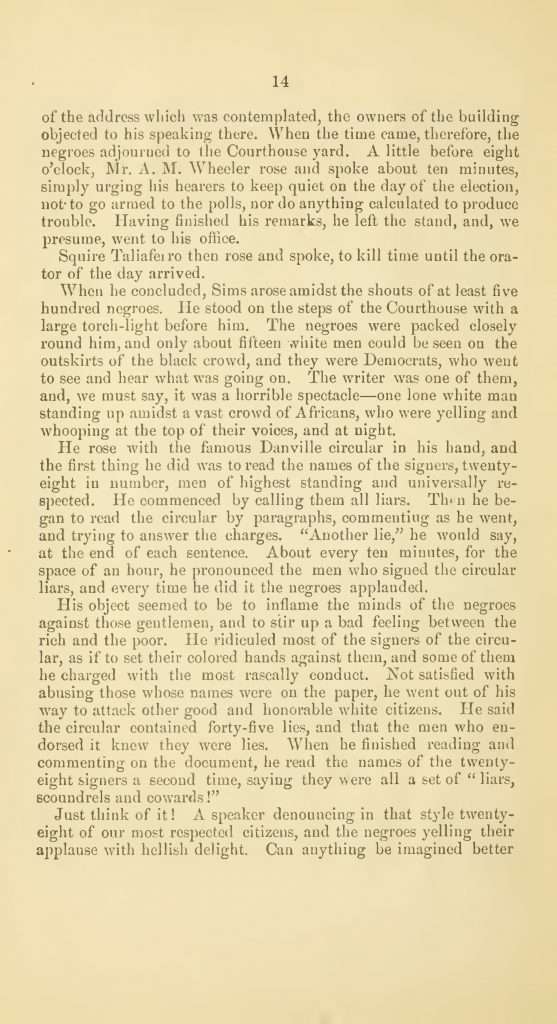 of the address which was contemplated, the owners of the building objected to his speaking there. When the time came, therefore, the negroes adjourned to the Courthouse yard. A little before eight o’clock, Mr. A. M. Wheeler rose and spoke about ten minutes, simply urging his hearers to keep quiet on the day of the election, not to go armed to the polls, nor do anything calculated to produce trouble. Having finished his remarks, he left the stand, and, we presume, went to his office.

Squire Taliaferro then rose and spoke, to kill time until the orator of the day arrived.

When he concluded, Sims arose amidst the shouts of at least five hundred negroes. He stood on the steps of the Courthouse with a large torch-light before him. The negroes were packed closely round him, and only about fifteen white men could be seen on the outskirts of the black crowd, and they were Democrats, who went to see and hear what was going on. The writer was one of them, and, we must say, it was a horrible spectacle—one lone white man standing up amidst a vast crowd of Africans, who were yelling and whooping at the top of their voices, and at night.

He rose with the famous Danville circular in his hand, and the first thing he did was read the names of the signers, twenty-eight in number, men of highest standing and universally respected. He commenced by calling them all liars. Then he began to read the circular by paragraphs, commenting as he went, and trying to answer the charges. “Another lie,” he would say, at the end of each sentence. About every ten minutes, for the space of an hour, he pronounced the men who signed the circular liars, and every time he did it the negroes applauded.

His object seemed to be to inflame the minds of the negroes against those gentlemen, and to stir up a bad feeling between the rich and the poor. He ridiculed most of the signers of the circular, as if to set their colored hands against them, and some of them he charged with the most rascally conduct. Not satisfied with abusing those whose names were on the paper, he went out of his way to attack other good and honorable white citizens. He said the circular contained forty-five lies, and that the men who endorsed it knew they were lies. When he finished reading and commenting on the document, he read the names of the twenty-eight signers a second time, saying they were all a set of “liars, scoundrels and cowards!”

Just think of it! A speaker denouncing in that style twenty-eight of our most respected citizens, and the negroes yelling their applause with hellish delight. Can anything be imagined better 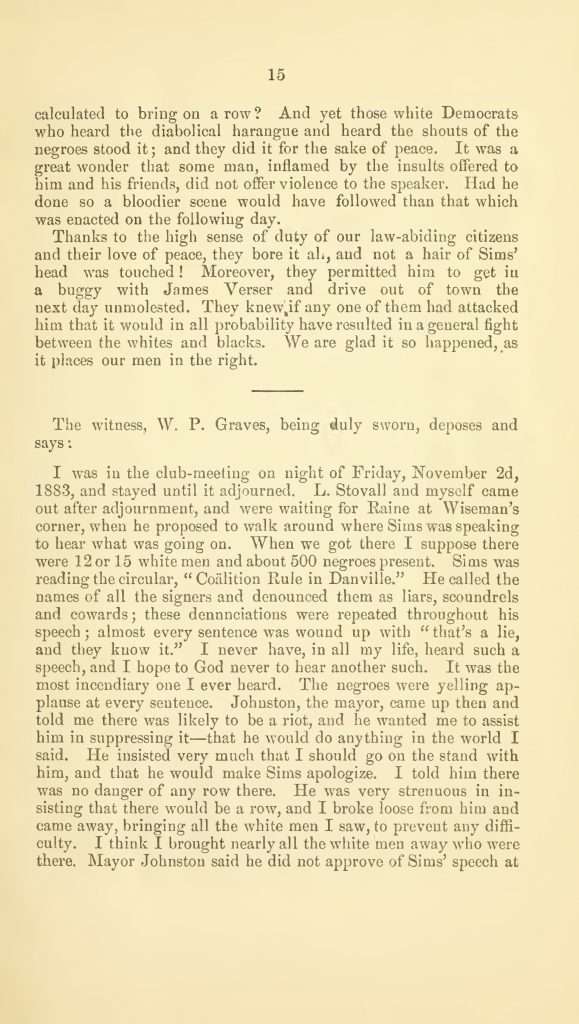 calculated to bring on a row? And yet those white Democrats who heard the diabolical harangue and heard the shouts of the negroes stood it; and they did it for the sake of peace. It was a great wonder that some man, inflamed by the insults offered to him and his friends, did not offer violence to the speaker. Had he done so a bloodier scene would have followed than that which was enacted on the following day.

Thanks to the high sense of duty of our law-abiding citizens and their love of peace, they bore it all, and not a hair of Sims’ head was touched! Moreover, they permitted him to get in a buggy with James Verser and drive out of town the next day unmolested. They knew if any one of them had attacked him that it would in all probability have resulted in a general fight between the whites and blacks. We are glad it so happened, as it places our men in the right.