One of seven children, Claude Augustus Swanson was born in Swansonville, Pittsylvania County, on March 31, 1862. His parents were the influential tobacco entrepreneurs John Muse Swanson and Catherine Pritchett Swanson. In 1876, the bright tobacco market collapsed as a result of overproduction and forced family retrenchment. This included for Swanson a two-year stint as a schoolteacher. Three years later, when school appropriations withered, he entered the new state agricultural college at Blacksburg (now Virginia Polytechnic Institute and State University, or Virginia Tech). Unsettled commodity markets then led him to Danville, where, with aid from a brother, he became a clerk in John Carter’s grocery.

Swanson’s charm, energy, and public speaking skills led four Danville Methodist laymen to lend him funds to attend Randolph-Macon College in Ashland. There he won oratorical prizes, edited the college newspaper as well as the Hanover and Caroline News, and impressed Democratic Party leaders in nearby Richmond. He also met Elizabeth Deane Lyons, whom he married in 1894. After finishing at Randolph-Macon in 1885, Swanson received a law degree from the University of Virginia in Charlottesville in 1886, and then opened a quickly lucrative law practice in Chatham, Pittsylvania’s county seat.

Swanson began his long political career with his election in 1892 to the U.S. House of Representatives. He represented Virginia’s Fifth Congressional District, which stretched from Pittsylvania and Franklin counties into the Republican mountain counties of Floyd, Carroll, and Grayson. Within the decade, amid the district’s rowdy politics, he overcame two contested election cases. Meanwhile, a stunning credit famine—the 1893 depression—pushed the nimble young politician to become Virginia’s most outspoken congressional advocate of William Jennings Bryan’s inflationary fiscal reforms. (Bryan was a perennial Democratic presidential candidate whose father was born in Virginia. He long criticized pegging the value of the U.S. dollar to a gold standard, as opposed to silver or both silver and gold.) By 1896, Swanson’s friends and associates, including Henry D. Flood, James Hay, Francis Lassiter, and Thomas Staples Martin, all were following his lead.

Their views in credit-starved Virginia troubled the conservative creditor class. Outraged railroad developer Joseph F. Bryan, owner of the Richmond Times, compared their inflationary platform to “that of the communists, the anarchists and repudiators of debt.” Swanson had helped to elect Martin in 1893 to the U.S. Senate. The Times claimed the election had been realized though creation of a corrupt political “ring” rather than as a positive response to agrarian and commercial pleas. It was true that key associations, relationships, and personal appeals composed the bone and sinew of Virginia politics. This canard, however, fostered by partisan journalists and defeated opponents, simplified Virginia political definitions and glossed over the primary issues that motivated the electorate.

In 1903 he purchased the 1830s-era plantation Eldon, a few miles from Chatham. He entered into real estate consortiums; on one occasion, he acquired Washington, D.C., acreage with Flood and the latter’s young nephew, the future governor and U.S. senator Harry F. Byrd Sr. After a failed 1901 attempt to gain the gubernatorial nomination at the Democratic convention, he succeeded four years later in Virginia’s first primary elections following the adoption of the reactionary Virginia Constitution of 1902 that did much to disenfranchise African Americans and poor whites. 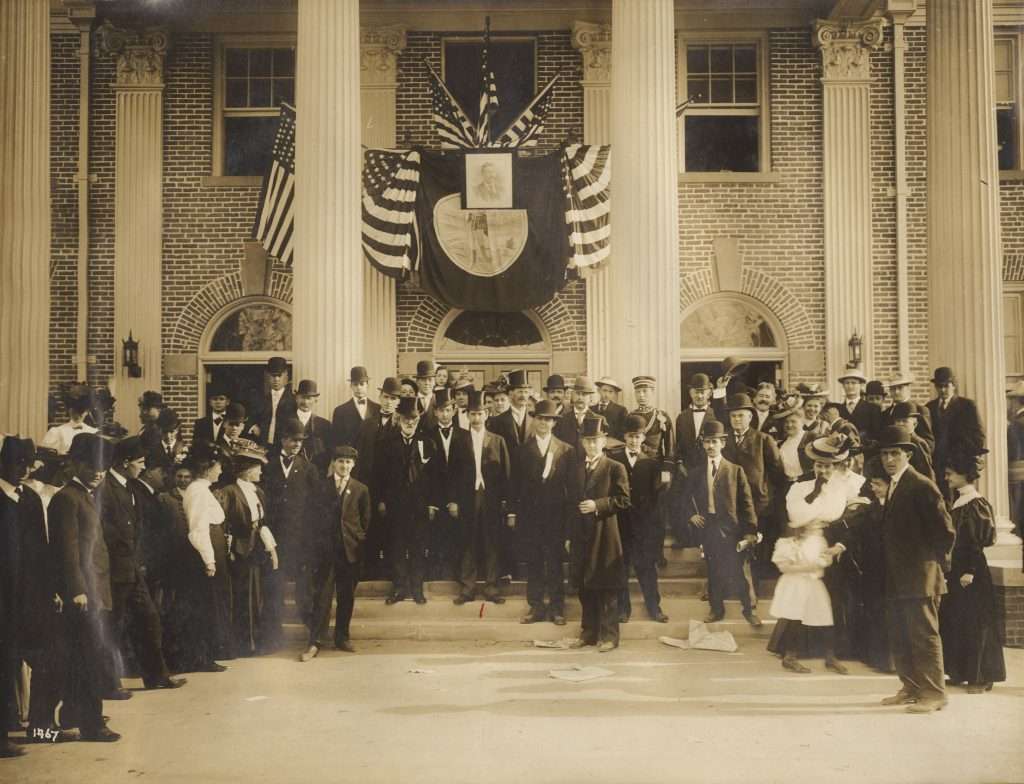 Swanson’s governorship (1906–1910) became the high point of progressive reform in Virginia. Incorporating administrative skills, a knowledge of legislative folkways, and an understanding of the Virginia political landscape, he cajoled the General Assembly to action. He reorganized the State Corporation Commission, one of the few truly progressive reforms in the 1902 Constitution, so that it lowered railroad rates and passed higher corporation taxes. As a member of the State Board of Education he led a movement for more capable school superintendents. Improved tax revenues allowed sponsorship of major school construction and improvement of teacher salaries. These funds, however, were unevenly applied under the racially segregated school systems. He also helped to fund, through the use of matching funds by the first highway commissioners, Virginia’s first modern and universally available highway system. Swanson sponsored reorganization of the Board of Health and establishment of the Board of Charities and Corrections, with which he systemized state services and introduced new management techniques. He also convinced the legislature to fund sanatoriums, teachers colleges, and a survey of Virginia’s geological resources.

As Senator and Secretary of the Navy

Initially appointed to the U.S. Senate after the death of John W. Daniel, Swanson won four elections by large margins and successfully advanced Staunton-born U.S. president Woodrow Wilson‘s reform proposals. These included federal highway funding, child labor regulatory legislation, a lower tariff, and long-gestated banking laws. His role in development of the U.S. Navy not only protected the nation’s trade lanes but also prepared the fleet for participation in World War I (1914–1918). In Virginia, he and Senate majority leader Thomas Staples Martin obtained land for expansion of the Norfolk Navy Base, laying cornerstones for the Hampton Roads naval complex. His membership on the Senate committees on Naval Affairs and on Foreign Relations led him to favor the League of Nations and its collective security goals. 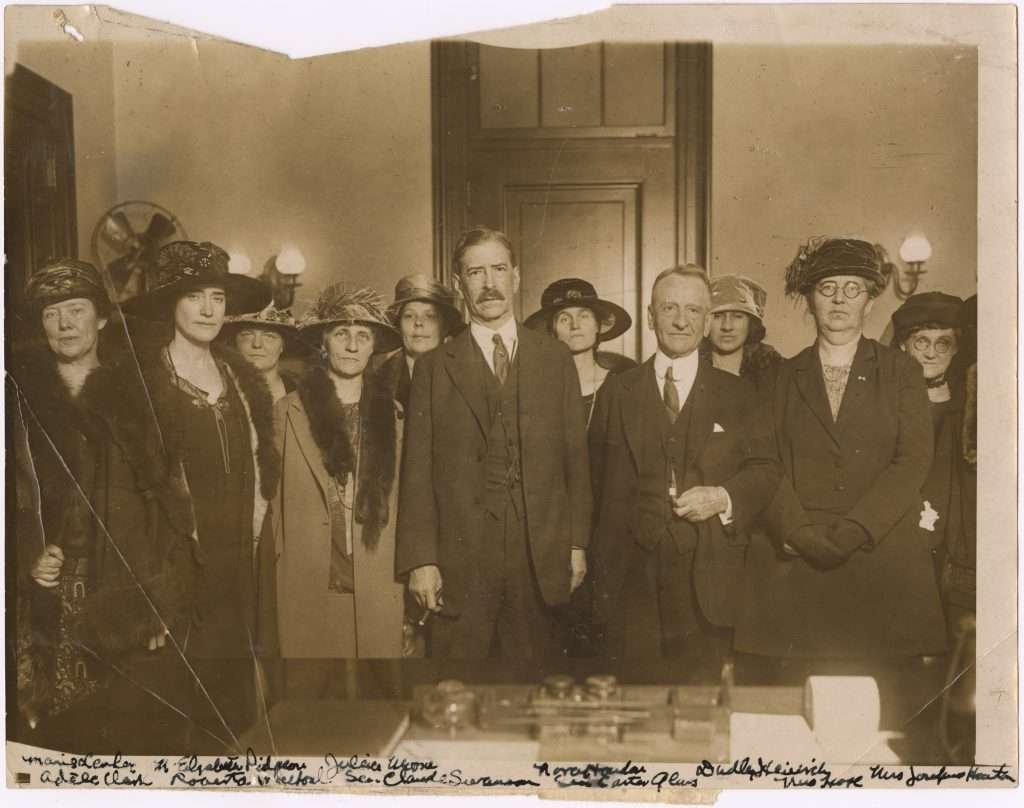 The narrowed Virginia electorate opposed passage of the Nineteenth Amendment to the U.S. Constitution, which allowed women the right to vote, and led to his vote against woman suffrage. Still, he advised Wilson behind closed doors on its passage through Congress. Following Elizabeth Swanson’s death in 1920, he married her widowed sister Lulie Lyons Hall in 1923.

Swanson’s advocacy of the U.S. Navy and national defense grew during the 1920s despite hesitant Republican administrations. Involved in the development of weapons systems and naval strategy, fostered by growing concerns over Japanese aggression, he argued for a “treaty navy” as allowed by the 1922 Washington agreements and those of the London Treaty (1930). He was a delegate to the unsuccessful Geneva Disarmament Conference (1932). When U.S. president Franklin D. Roosevelt chose him as the secretary of the navy in 1933, he applied the skills he had acquired in Congress to getting naval expansion bills passed. By 1936, United States shipyards were bulging with new construction. A year before his death, although physically ailing, he relished passage of the largest U.S. peacetime naval appropriation to date.

Swanson died on July 7, 1939, less than two months before Germany invaded Poland, heralding the beginning of World War II (1939–1945). He was buried at Hollywood Cemetery in Richmond.

RELATED CONTENT
Categories:
Type:
Related SOLs:
MAP
TIMELINE
March 31, 1862
Claude Augustus Swanson is born in Swansonville, Pittsylvania County, to the influential tobacco entrepreneurs John Muse Swanson and Catherine Pritchett Swanson.
1886
Claude A. Swanson receives a law degree from the University of Virginia in Charlottesville, and then opens a quickly lucrative law practice in Chatham, Pittsylvania's county seat.
1892
Claude A. Swanson wins election to the U.S. House of Representatives from Virginia's Fifth Congressional District, which stretches from Pittsylvania and Franklin counties into the Republican mountain counties of Floyd, Carroll, and Grayson. He serves until 1906.
1893
A credit famine and depression push Claude A. Swanson to become Virginia's most outspoken congressional advocate of William Jennings Bryan's inflationary fiscal reforms, which criticize pegging the value of the U.S. dollar to a gold standard, as opposed to silver or both silver and gold.
1903
Claude A. Swanson purchases the 1830s-era plantation Eldon, a few miles from Chatham.
1905
Claude A. Swanson gains the gubernatorial nomination in Virginia's first statewide Democratic primary, and wins the general election after defeating Richmond Republican Lunford Lewis.
February 1, 1906
Claude A. Swanson becomes governor of Virginia, and institutes a number of progressive reforms, including improvements to Virginia's white public schools, highways, and railroads. He serves until 1910.
1910
Governor William Hodges Mann appoints Claude A. Swanson to the U.S. Senate to fill the vacancy created by the death of John W. Daniel. Swanson goes on to win four elections by large margins, serving in the Senate until 1933.
1922
Sarah Lee Fain signs on to the campaign to reelect Virginia's U.S. senator Claude A. Swanson. Her success in convincing female voters to support him prompts others to suggest that she run for office herself.
1933
President Franklin D. Roosevelt appoints Claude A. Swanson to the post of secretary of the U.S. Navy.
July 7, 1939
Claude A. Swanson dies at the age of seventy-seven while on a visit to Rapidan Camp in Shenandoah National Park. He is buried at Hollywood Cemetery in Richmond.
FURTHER READING
CITE THIS ENTRY