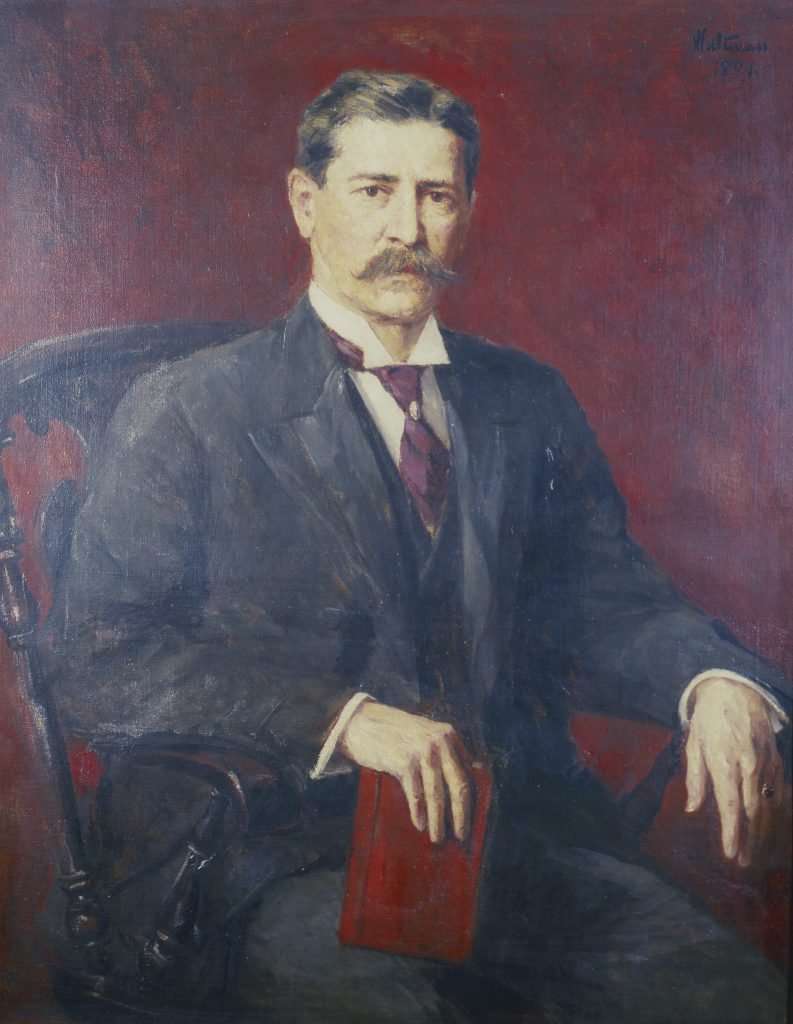 Claude A. Swanson was a powerful Democratic Party leader and one of the most successful Virginia politicians of his era. He served seven terms in the United States House of Representatives (1893–1906), was governor of Virginia from 1906 until 1910, and U.S. senator from 1910 until 1933. In addition, Swanson served as secretary of the United States Navy under U.S. president Franklin D. Roosevelt from 1933 until his death in 1939. While in the House, Swanson presided over a raucous time in state politics that culminated in the adoption of the state Constitution of 1902 that was notorious for its disenfranchisement of African Americans and poor white men in spite of the universal suffrage called for by the Fifteenth Amendment to the U.S. Constitution (1870). As governor, he instituted a number of Progressive reforms and continued to advance those reforms, as well as his belief in a strong U.S. Navy while in the U.S. Senate and in Roosevelt's cabinet.

This oil-on-canvas painting of Swanson is the work of Harry Franklin Waltman (1871–1951). Born in Ohio, Waltman became an orphan when he was eleven and worked as an indentured laborer on his uncle's farm for five years. After earning his freedom and fifty dollars, he attended a lecture on painting by the artist Jerome Uhl, who was passing through town. "With only a few dollars in his pocket, young Waltman took a train east and showed up on his first night at Uhl's Washington studio," according to the historian Gretchen Gerzina. "Uhl took pity on the boy and let him sleep in the studio and gave him lessons, but Waltman needed to support himself. At first he went door to door asking for work so that he could 'study art,' which netted him little but suspicion. He finally took a job crushing rocks for roads." His first patron was Frances Hodgson Burnett, the English-born author of Little Lord Fauntleroy (1885–1886) and The Secret Garden (1911); after hearing his story, she wrote him a check for one hundred dollars. Waltman went on to study in Paris and he painted in New York City from 1896 until his death.