Call for a Convention

The Progressive Era lasted from the 1890s to the 1920s and was marked by efforts to root out governmental corruption and waste, and to protect the rights of women, children, and the working-class. Not all progressive reforms were strictly democratic, however. For instance, reformers sought efficiency in government by emphasizing the roles of experts and specialists over elected officials and common citizens. In Virginia, progressives attempted to make experts, or “virtuous” voters, out of the entire electorate by educating citizens on their civic responsibilities and then excluding whole classes of voters deemed unfit. African Americans were among those most often excluded. By definition, they were considered to be less “virtuous” than their white counterparts, and were therefore often the targets of various rules, regulations, and restrictions designed to prevent them from voting. The language of the law generally applied to all eligible male voters, but whites tended to benefit from numerous exemptions. 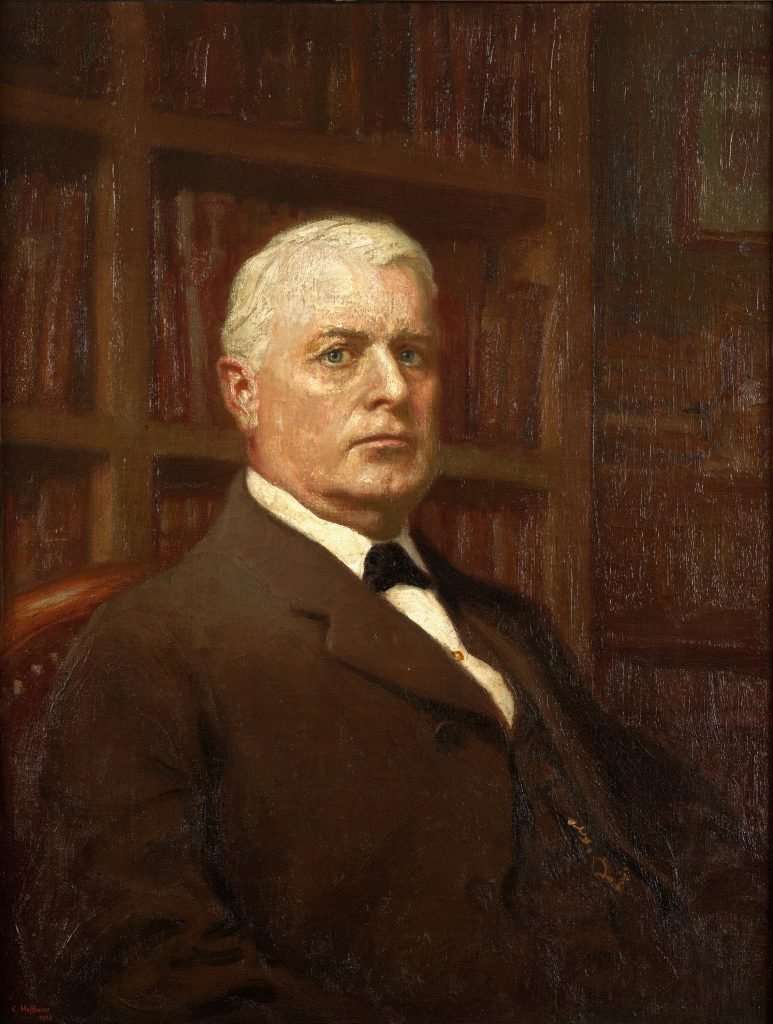 Progressive reforms in Virginia came in response to a period of political and economic turmoil in the decades following the Reconstruction-era Underwood Constitution of 1869. New York–native John C. Underwood was a Republican judge who dominated the convention in the absence of boycotting Democrats. The document he helped to draft included full suffrage for all males twenty-one years or older, including African Americans, and was an important step in getting the state readmitted into the Union following the American Civil War (1861–1865). Despite this reform, state politics came to be largely influenced by the same conservative Democrats who had refused to participate in the convention. One of their leaders was U.S. senator Thomas Staples Martin, a Confederate army veteran and railroad lawyer whose tenure atop the state party, beginning with his election in 1893, was notorious for accusations of bribery, voter fraud, and corruption. The political turmoil brought forth public alarm and calls for reform.

As early as 1885, such calls had coalesced into a constitutional reform movement, with black suffrage one of its principal targets. Nine years later, in 1894, the General Assembly narrowly passed the controversial Walton Act. It mandated what was known as the “Australian ballot,” or a uniform ballot issued by the state and not by a political party. In addition, the new law instituted secret voting, which some worried would have significant consequences for voters who could not read. As the New York Times reported on October 29, 1894, “Its most effective, as well, possibly, as its most repugnant, feature is that providing for the appointment of a special constable. This officer is practically the ballot reader for the physically disqualified and the illiterate. It is within his power to disqualify or neutralize the votes of as many of the latter class as he may see fit.”

Soon, calls for a new constitution were coming from both ends of the political spectrum, from Populists as well as conservative Democrats. On May 24, 1900, voters approved the proposed convention by state referendum. 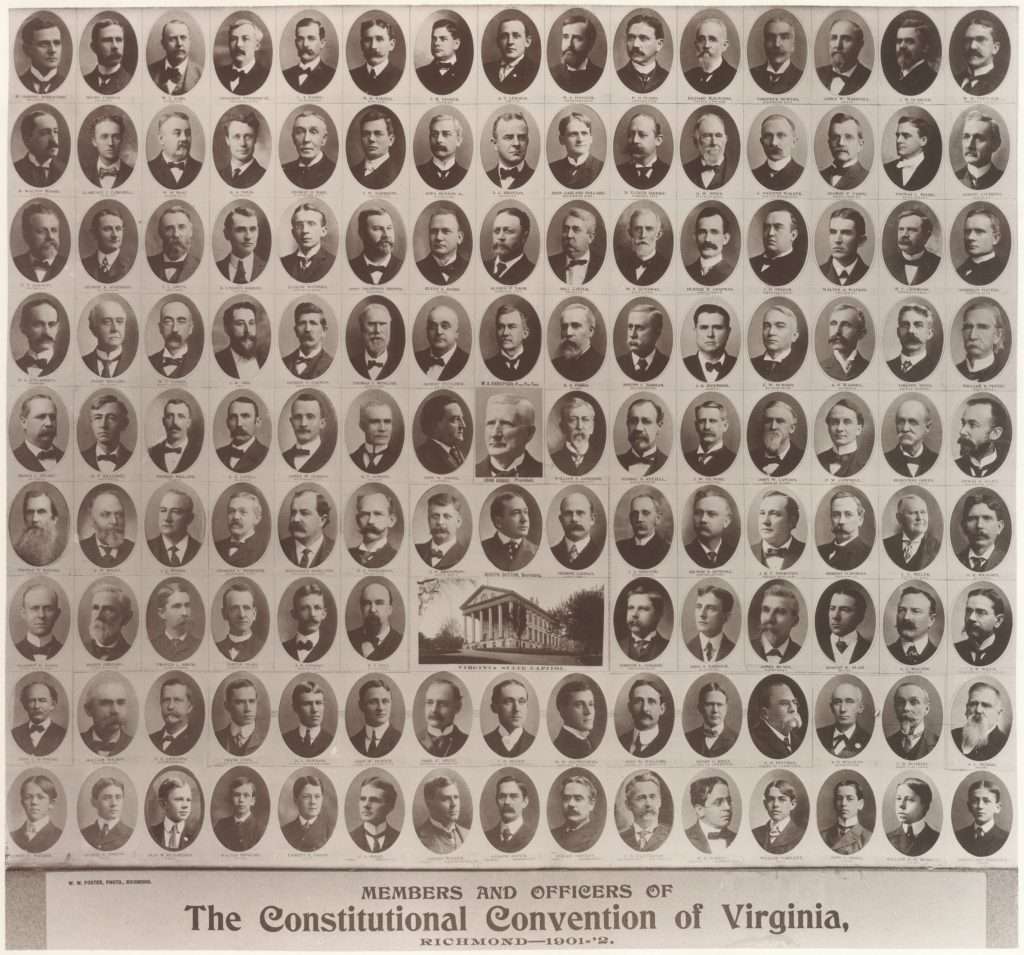 An elected body of one hundred delegates, including eleven Republican and one Independent, convened in Richmond on June 12, 1901, and debated for almost a year, until June 26, 1902. Not surprisingly, the convention was dominated by Democrats, such as the state party chairman, J. Taylor Ellyson; the convention’s president, John Goode; and the party’s gubernatorial candidate, Andrew J. Montague. At the beginning, Goode explained that voting rights, in particular those enjoyed by African Americans, would be “a subject of transcendent interest and importance” to the convention. “The right of suffrage is not a natural right,” he explained. “It is a social right and must necessarily be regulated by society. Virginia, within her borders, can regulate it according to her own sovereign will and pleasure, provided she does not violate the Constitution of the United States.”

The big question, though, was how to do that. After all, the Fourteenth Amendment (1868) to the U.S. Constitution guaranteed equal protection under the law; the Fifteenth (1870) guaranteed African American suffrage. This latter amendment, said Goode, was not only “a stupendous blunder, but a crime against civilization and Christianity,” ratified by southern states only “under the rule of bayonet.” Still, he insisted that “our people have no prejudice, no animosity, against the members of the colored race.” Besides wondering how to tread this fine line between loving the black voter but hating his vote, the Democrats debated whether new laws also should exclude white voters deemed unworthy because of poverty or illiteracy.

Raleigh C. Minor, a delegate from Charlottesville, suggested one solution: the votes of landowners should count double those of nonlandowners. In a letter to the convention, he called his idea “plural voting,” claiming it would give “the balance of power to the great, intelligent middle class, while not denying to the poor and ignorant a voice in the community commensurate with their intelligence and average ability to pass upon the complex public questions that constantly arise.”

Broadsides Concerning the Constitutional Convention of 1901–1902

The most-debated specific measure, though, was the so-called “understanding clause,” which required prospective voters—or at least those unable to pay a newly instituted poll tax—to give a “reasonable” explanation of any section of the new state constitution at the demand of a registration board. This board, of course, was empowered fully to decide on what was “reasonable.” Delegate Alfred P. Thom did not pretend that such boards would treat white and black voters equally. “[I]t would not be frank in me, Mr. Chairman,” he said, “if I did not say that I do not expect an understanding clause to be administered with any degree of friendship by the white man to the suffrage of the black man.” And just to clarify his meaning, he added, “I would not expect an impartial administration of the clause.”

Not everyone supported the understanding clause. Delegates from the western part of the state, decrying the “miasma, peanuts and politics of Eastern Virginia,” worried that, Thom’s assurances notwithstanding, it would disenfranchise illiterate whites. Others, like W. Gordon Robertson, worried that it wouldn’t disenfranchise illiterate whites: Here is a body of one hundred Virginians in Constitution Convention assembled and this is the poor, pitiful result that we present to the world. The best thing that we can do to get around the Fifteenth Amendment is to appoint men in every county who will use favoritism towards the white man as against the black man. There are thousands upon thousands of white men in our mountains who can neither read nor understand this Constitution, whom these gentlemen are willing to have vote, and who would not be eligible to vote under the provisions of this Constitution, if this temporary understanding clause is properly administered.

In the end, the constitution that emerged from these debates placed severe new restrictions on voter eligibility. It required payment of a $1.50 poll tax, to be paid six months in advance of any election. Not only that, but the law stipulated that payment be up-to-date for the previous three years. The double-vote plan was rejected, but the convention did adopt the understanding clause, making it a temporary measure for the years 1903 and 1904. In order to avoid the appearance of discrimination against poor whites, the convention also elected to choose the registrars who would enforce voter laws during the first two years following the implementation of the constitution. An additional law that took effect after 1903 required a written application for registration, completed without assistance. Finally, all Civil War veterans, North and South, and their sons were exempted from all of the above requirements.

The delegates chose not to submit their new constitution to Virginia voters for ratification, concluding that the electorate would not willingly choose to disenfranchise itself. Following various court challenges, the Virginia Supreme Court of Appeals ruled in Taylor v. Commonwealth (1903) that the constitution had become law on July 10, 1902.

Legacy of the 1902 Constitution 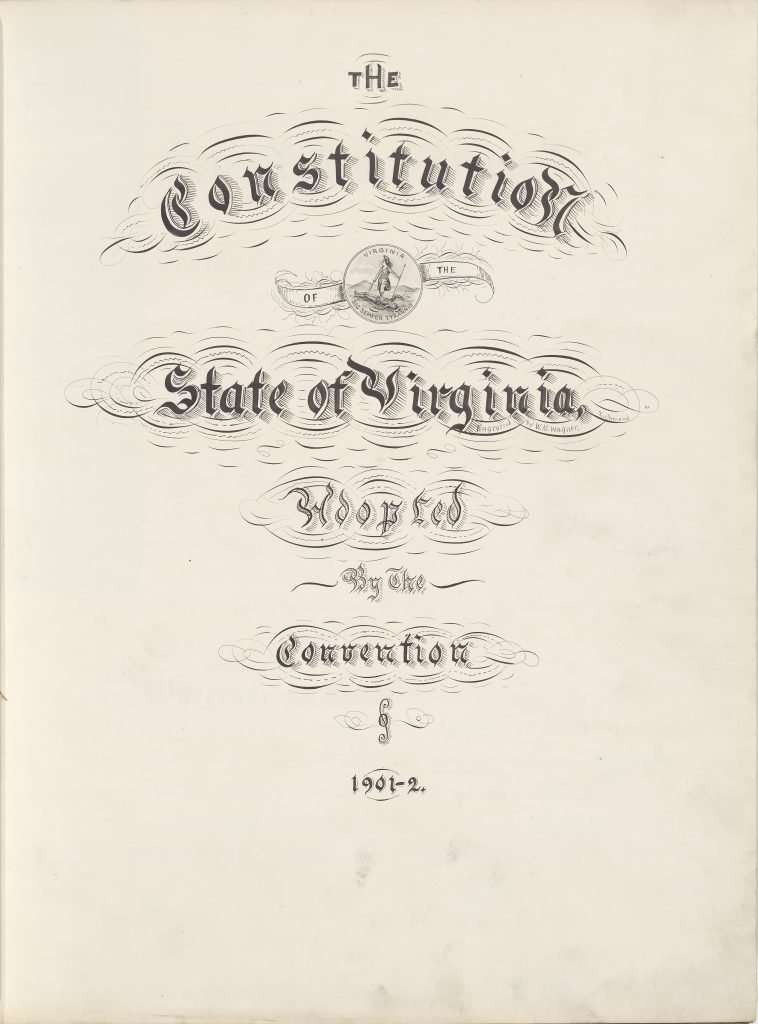 The Constitution of the State of Virginia Adopted by the Convention of 1901—2.

Once implemented, the 1902 Constitution achieved its intended purpose of drastically reducing the number of eligible voters. Voting rates dropped correspondingly, with 88,000 fewer ballots cast in the 1905 gubernatorial election than in the previous election in 1901. The number of voters in presidential elections similarly dropped between 1888 and 1928. Although as many as 15,000 African Americans managed to vote after 1902, they were significantly disempowered politically. Efforts by some African Americans to pursue lawsuits against the constitution were dismissed by the courts, the last in 1908. At the same time, the disenfranchisement provisions failed to address the issue of corruption genuinely, as the reduction in voters led to officeholders beholden to the political organizations that had brought them into power. Other legal changes brought about by the convention included the abolition of the county court system in favor of granting the Democratic-dominated General Assembly the authority to choose judges and other local officials.

The 1902 Constitution created a new legal enforcement of Jim Crow and further solidified its social enforcement. Despite that dark legacy, the convention did enact some genuine reforms, including a commission to regulate the railroads, provisions regarding workmen’s compensation, and a State Corporation Commission that addressed issues of industrialization and helped create a certain degree of economic stability within Virginia. The 1902 Constitution remained in effect throughout most of the twentieth century until a new state constitutional commission sought to revise it, resulting in the significant legal advances of the Virginia Constitution of 1971.

RELATED CONTENT
Categories:
Related SOLs:
MAP
TIMELINE
1869
John C. Underwood, a Republican judge who dominated the year's constitutional convention in the absence of boycotting Democrats, helps to draft a constitution for Virginia that includes full suffrage for all males twenty-one years or older, including African Americans.
March 6, 1894
The General Assembly narrowly passes the controversial Walton Act, which mandates what is known as the "Australian ballot," or a uniform ballot issued by the state and not by a political party. The law institutes secret voting and appoints a special constable who is the ballot reader for the physically disqualified and the illiterate.
May 24, 1900
Virginia voters approve a proposed constitutional convention by state referendum.
June 12, 1901—June 26, 1902
An elected body of 100 delegates convenes in Richmond for a constitutional convention, and debates for almost a year.
July 10, 1902
Virginia's Constitution of 1902 becomes law, disfranchising thousands of poor whites and nearly eliminating the state's African American electorate. It replaces Virginia's 1869 Reconstruction-era constitution, which had a universal male suffrage clause. The new constitution also creates the State Corporation Commission to regulate the railroads.
November 7, 1905
Largely because of the voting restrictions implemented by the Constitution of 1902, 88,000 fewer ballots are cast in the gubernatorial election than in the previous election in 1901.
July 1, 1971
The Constitution of 1971 becomes law and ends the rules and regulations instituted by the Constitution of 1902.
FURTHER READING
CITE THIS ENTRY